I really like perfecto and leather jacket. It's a timeless basic, which make you feel like a rockstar or a biker, even if you are a well-behaved good girl. It conveys a really strong collective imagery from Marlon Brando to the Ramones including Grease or Madonna in the 80s.
I wore a full leather outfit for a theme party "what you will never be". I choose to be dressed as a punk and try to adopt the attitude as well. It was really funny because the party was in a posh area of Paris and old ladies were changing compartment in the tube while seeing me.
I find it very fascinating, the fact   you can be whatever you want just by changing your clothes.

At first, I get inspired by Woody Allen movie Sleeper (1973)  there is a,scene of crazy futuristic party with a woman wearing a dress with babies dolls collar (in the movie you just see it 2 seconds, I was like "did I dreamed it?  and I had to rewind the video in order to be sure I didn't have an hallucination).

I made my first necklace with dolls for my birthday party 2 years ago  "Kitsch, Rococo and bad taste" ,(basically everybody had to dress in the most ugly way as possible).At this time, I was already experimenting with barbies head, but I wanted to make things bigger. 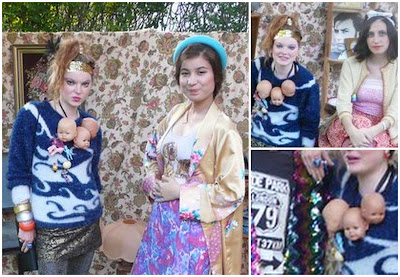 I stitched the dolls head on a fake leather jacket.  I cut dolls head in half Hope I don't sound too much like a psycho saying that), then I like stitching movies.  You need some movie you already know, like it doesn't require all your attention.   Thus I can say "i'm such a badass, I'm stitching barbie heads on jacket watching apocalypse now" The synthetic leather was completely destroyed.  I used it for a show two years ago and the main performer had really actions to do on stage so it was damaged.  But I took advantage of it filling all the holes with black lace. It's like in theatre, when you make a mistake you don't try to conceal it, it's better to emphasise  it, like that,  everybody thinks you did it on purpose.  In theatre like in costume, you learn to play around constraints,.Generally, I'm  not making clothes form scratch but from what i found, so I have to adapt it to make it what I want. I like the effect, because it conveys some gothic romanticism to this aggressive piece of clothes. 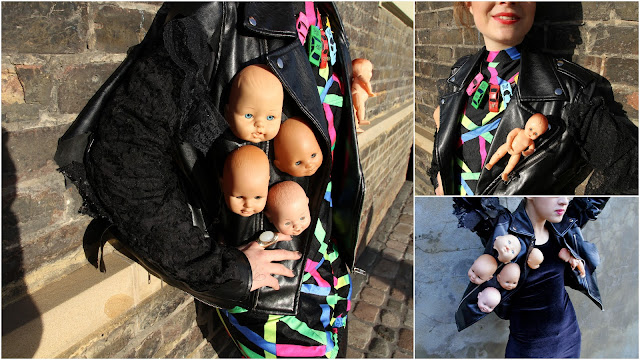 My friend Sophie did the "jacket experiment". At the beginning, she was like "maybe it's just Anne-Sophie, it's going with the whole character, but no, really  it's work on everybody!" Harry Potter has the invisible cape and I have the anti invisible cape: the dolls jacket!
We have expression, "the clothes don't make the nun"but  contrary to that I believe that the clothes make the nun. It engages conversation and provokes always the same kind of reactions. 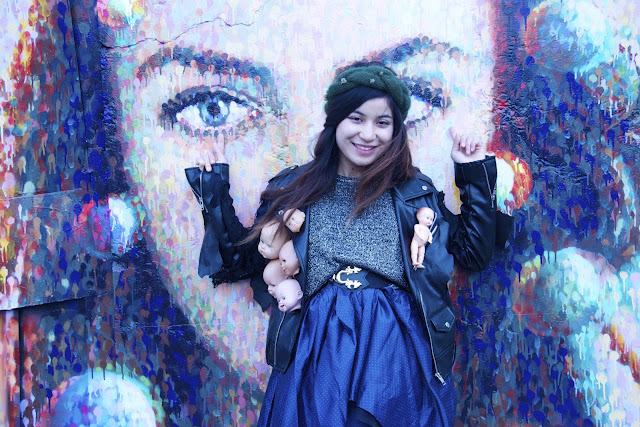 Men said they wish to have dolls, that they were only allowed to play with Action men, so you can see a kind of arbitrary repartition of toys according to gender generated by social stereotypes.
People make silly jokes, quite always the same like " Is theses babies all yours?

People are surprised, amazed, disturbed but it's always positive and friendly  reactions  never aggressive,  nasty or hostile not like "you shouldn't do that".Iit arouses sympathy. It brings a surreal element in people life which has it's proper internal logic. People are like "WHY do you have dolls on your jacket"
-Why do you have to find a reason for that…if you feel like it… 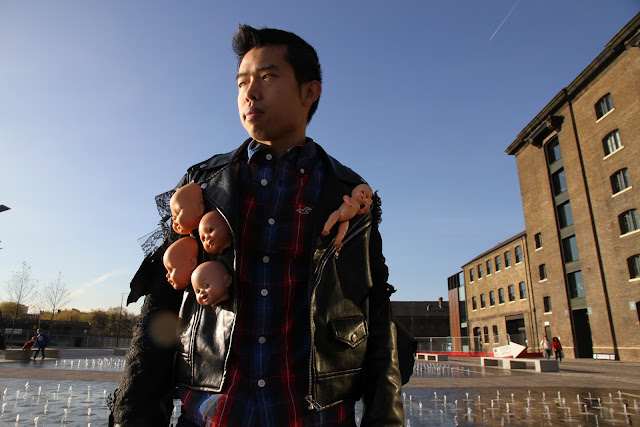 It always improve the atmosphere. For example I went to a nightclub with the jacket and the bouncer was laughing while he wad body-searched, touching the dolls heads (which is not normally a funny moment of the party),  "i'm bouncer for a long time and I've never seen such a thing".
It magnetise people's eyes, they come closer to make sure they see what they seen they stop, look at you and smile.
The word which come back the most is the word "curious"  People become really tactile, it's enhancive opening you some doors, it satisfies your social recognition, it makes you feel special. My friend described it as key which open you to the people.
People become really tactile and squeal  "I'm sorry to interrupt you but "Is that a BABY?", people are a bit cowed and confused. It's create an kind of interface of communication with people by giving you a certain "aura". 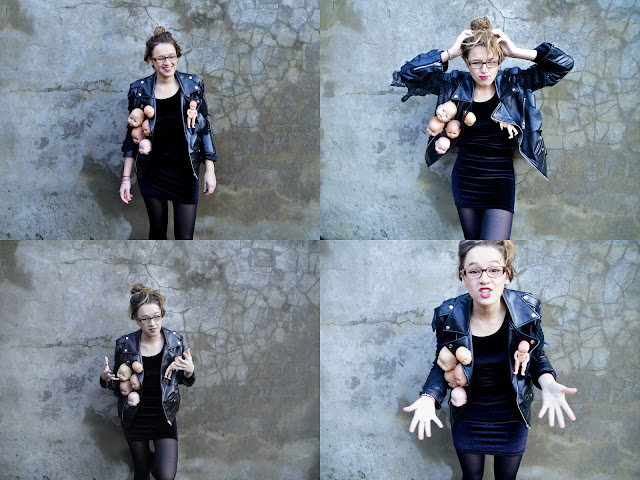 Maybe this jacket could be  like the little black jacket of Karl Lagerfeld, it suits everybody. I made Iris my roommate  trying the jacket with a red skirt and a shiny top.  Basically I realised I wanted to turn her into me.  But then she came back with ta really simple short  black dress saying "this is how I see it" and yes it was perfect like that on her! 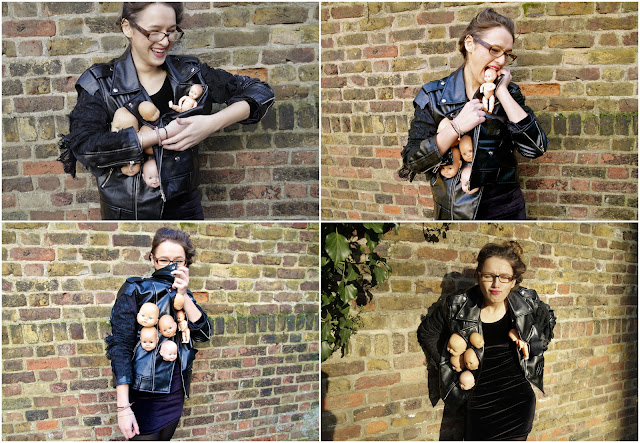 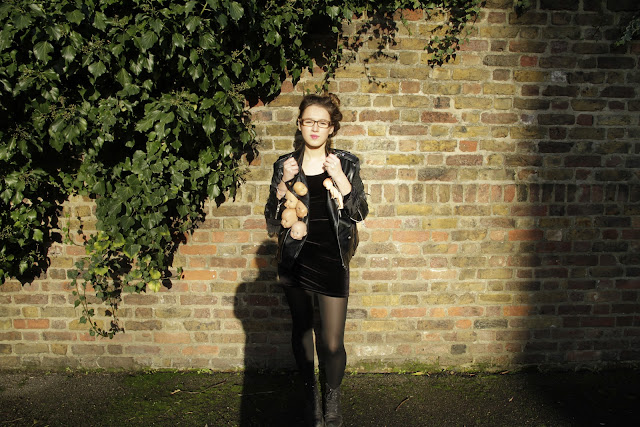 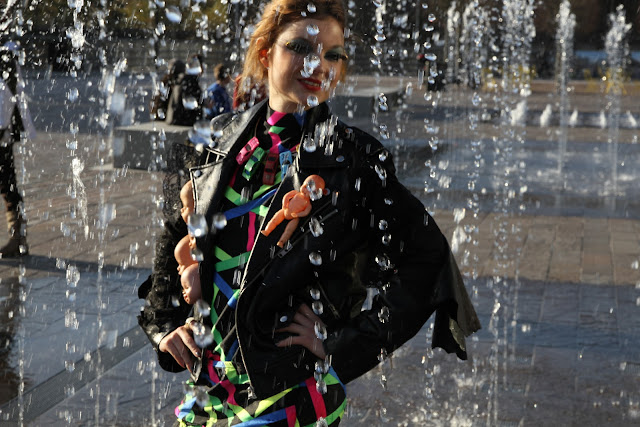 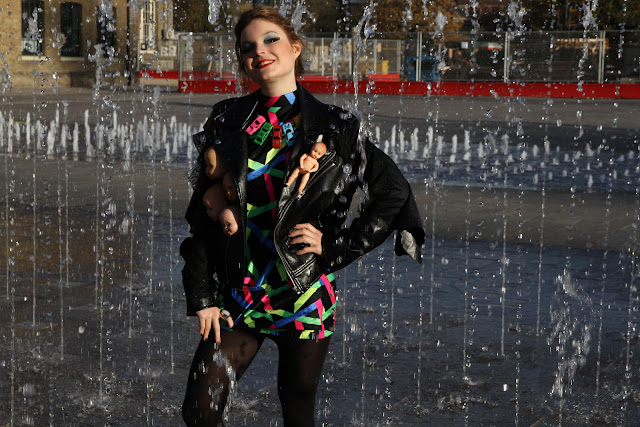 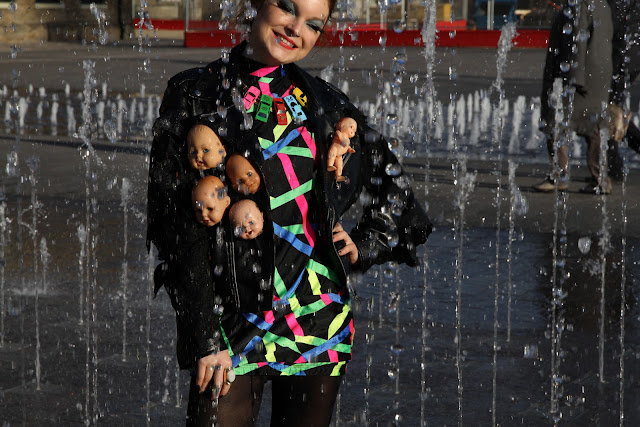