For once, this i'm not going to write about costume but about another kind of art: culinary art.

I'm not a big fan of cooking (actually it's mainly because i don't really have time), but I like making cake for my friend birthday, spending hours building eatable sculptures, I try to make them as good in the appearance than in their taste. Like costume, It's a like kind of applied art too, if you think that you can transform reality, you can applied it to cooking too, introducing pieces of wood or metal in the food in order to build structure, recreating miniature landscapes or  unnatural colour with adding food colouring. 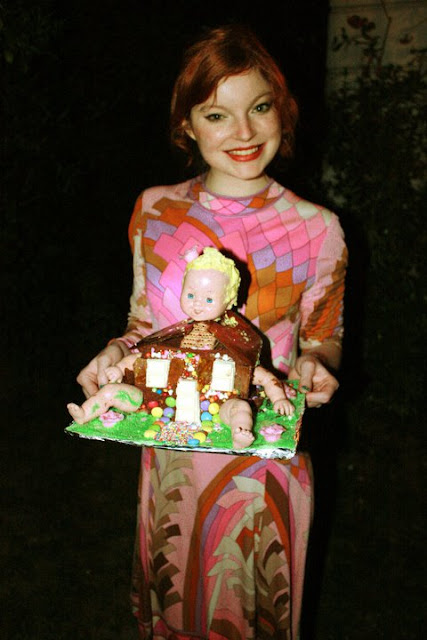 From my point of view, birthday party have always a performative aspect. The "cake" moment, is a kind of ritual that you stage by calling people attention, putting light down, singing. At the same time it's a surprise but the person who is the birthday know it's going to happen at some point in the party. So, the fact to have a really spectacular cake emphasises the surprise element and make the scene ore theatrical.
This is the Alice in Wonderland house cake, I had to remove the limbs and the head from the body. of the doll and stick then into the chocolate. To make it stand, I  enlist my mother engineer  and architectural skills (her skills are really complementary with artistic one and in general she is more practical than me!) . In order it not to fall apart we had to build a kind of structure with toothpicks and create a kind of balance. 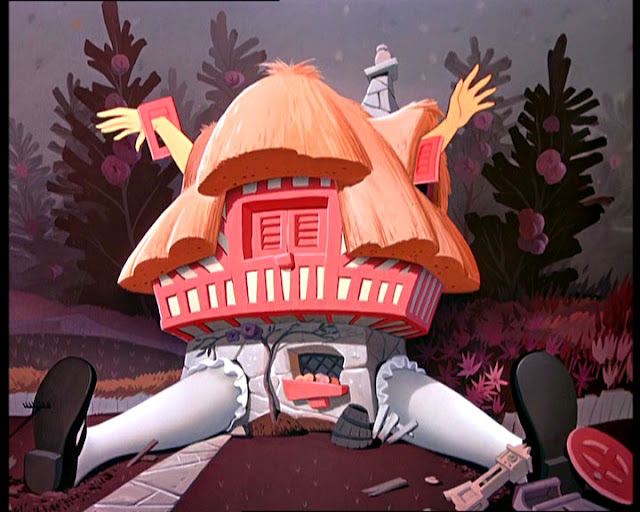 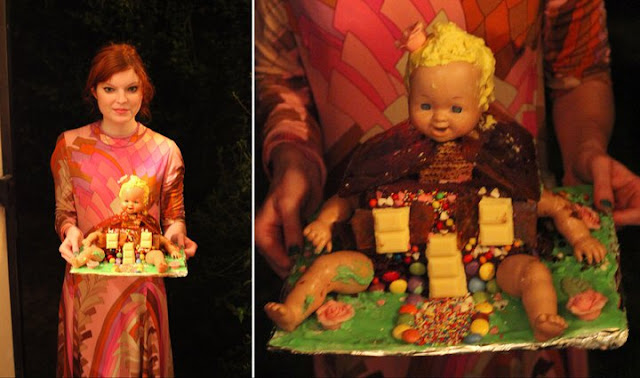 I named this cake "Noyade"" (Drowning) sable mouvants" (quicksand) basically, I made a chocolate short bread cake covered with Nutella, and I stuck Barbie and Ken arms in the chocolate as if the all body were disappearing in the cake. 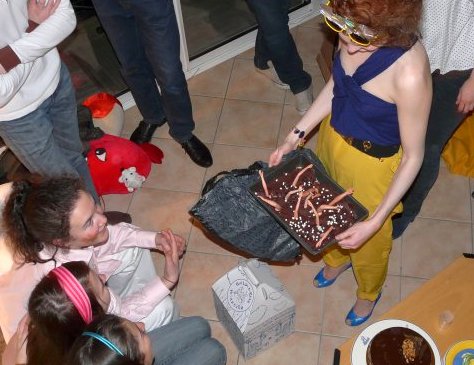 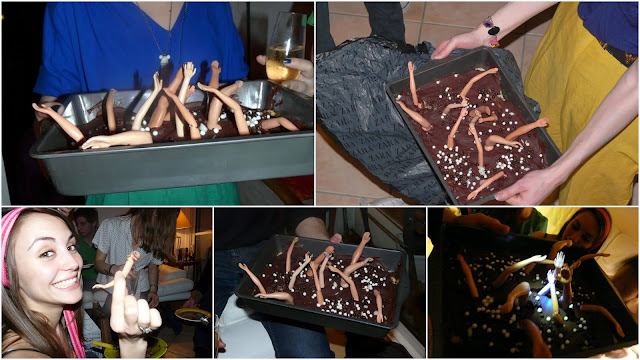 This is a Barbie cake with a chocolate dress and candy accessories (I wish I could make the same for me!) , actually you can fine a lot like that in the showcase of Chinese pastry  I love this trashy/girly aesthetic. 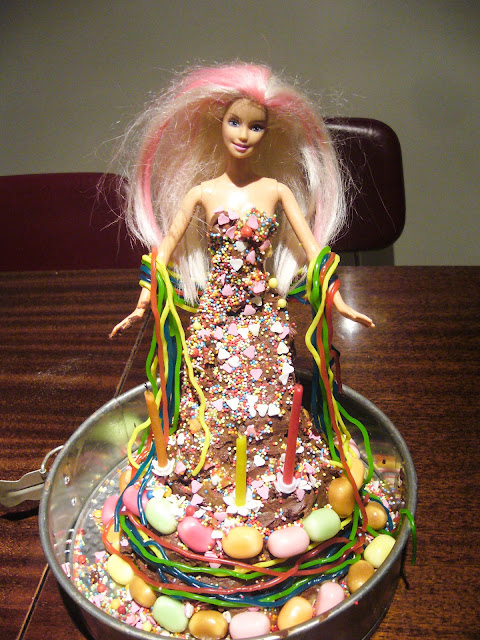 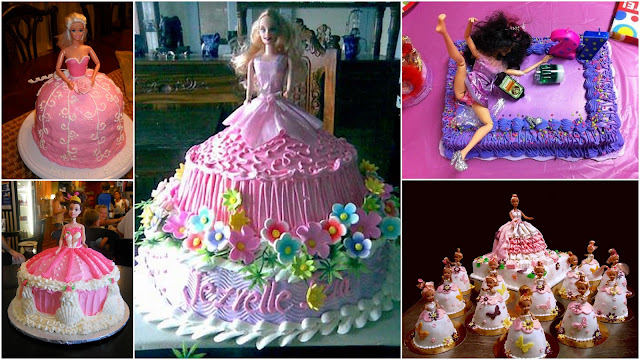 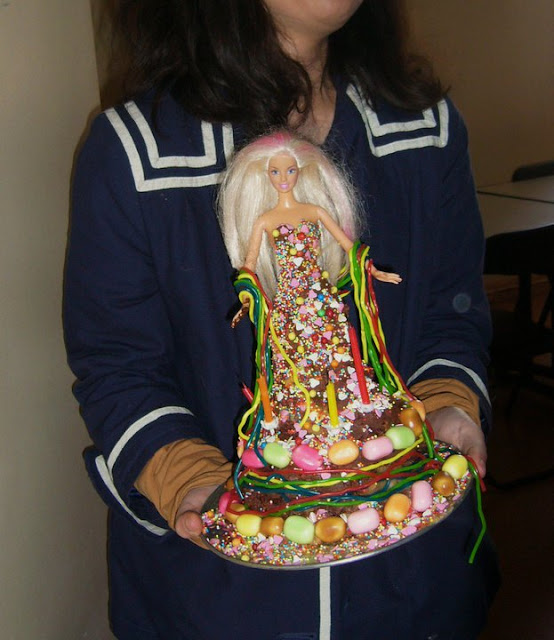 This is my most recent one, I tried to reproduce the picture that  my friend posted on the event for her birthday to make a Barbie Dolls Mud Wrestling Cake.  The candle are delimitating the ring and I was listening Eyes of the tiger, The Rocky soundtrack while I was cooking to be in the warrior mood. But then I had to carry it on my bike to the pub were the party happened, so it was a bit destroy and i had to fix it in bathroom! 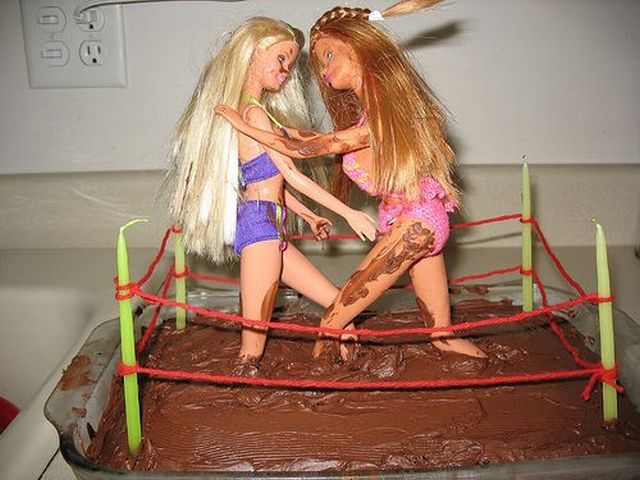 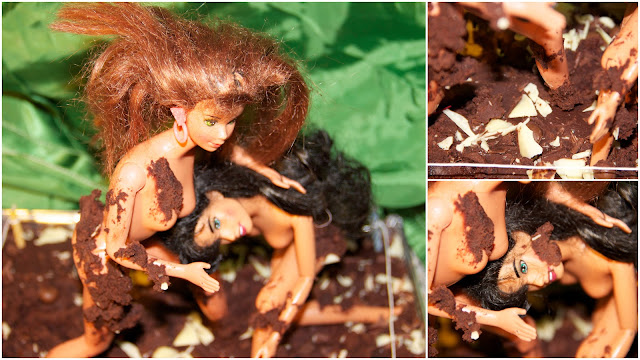 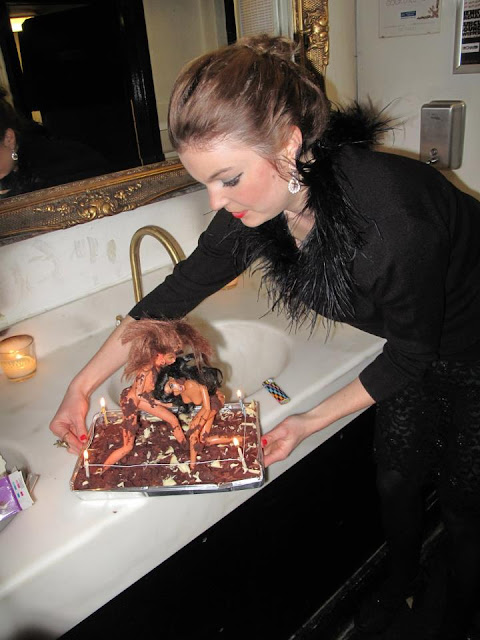