Space invaders are back 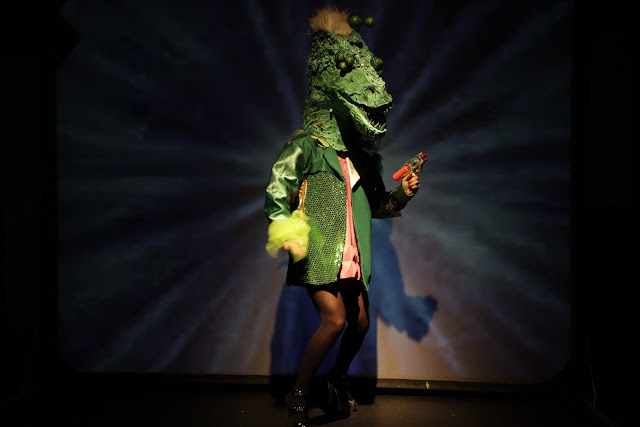 In my show the audience see through the eyes of the main character who is confused between fiction and reality. Effie has a bad relationship with her mother so in her mind, she pictures her has a space monster. It was the occasion for me to make a really massive and spectacular costume. (I'm not going to talk about the one i was wearing because for once, it was the must boring one, I was a psychologist and a nurse). 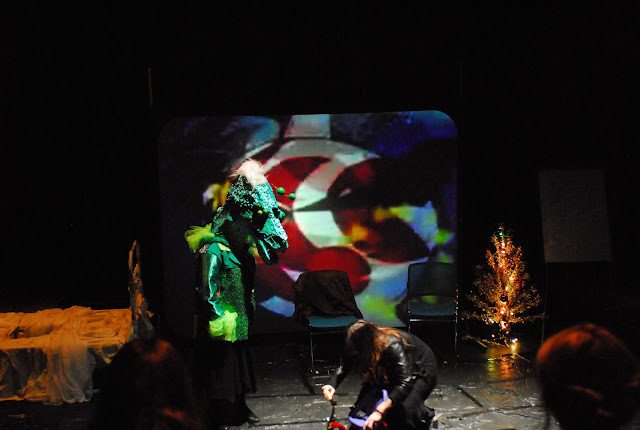 At the beginning,I just wanted to use it  for a really surrealistic space scene when Effie during a flashback is 7 and imagine her tricycle is a spaceship.  But the costume was so great that we keep it for other parts of the play. 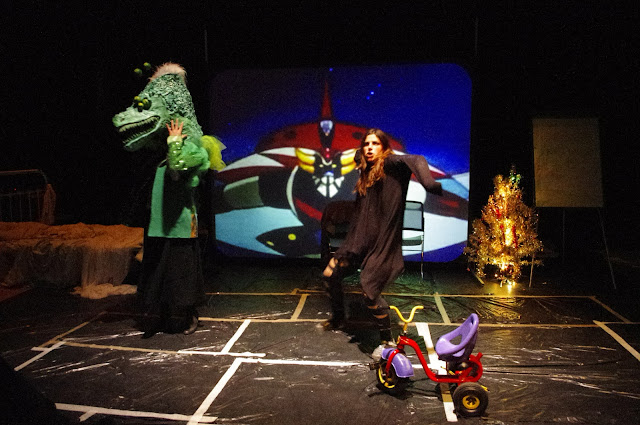 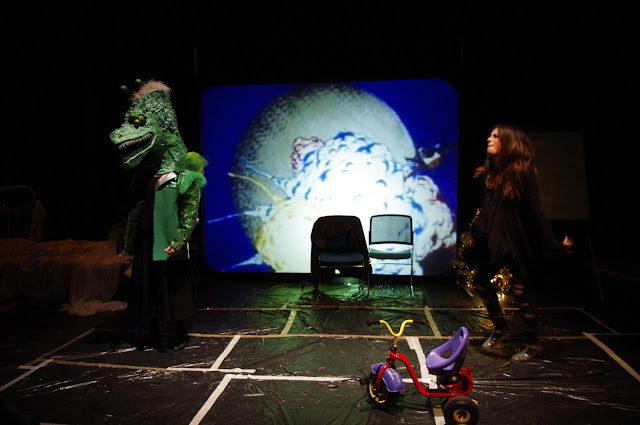 Because it was hard to find the right tone between Effie and her mother with a really naturalistic aesthetic I introduce the space monster costume in a every-day life scene and it made the scene really more powerful underlying the conflict between the mother and her daughter. For example wearing the monster head obliged Daniele to shout because the voice was muffed, so the conflict became more obvious and the scene less psychological. 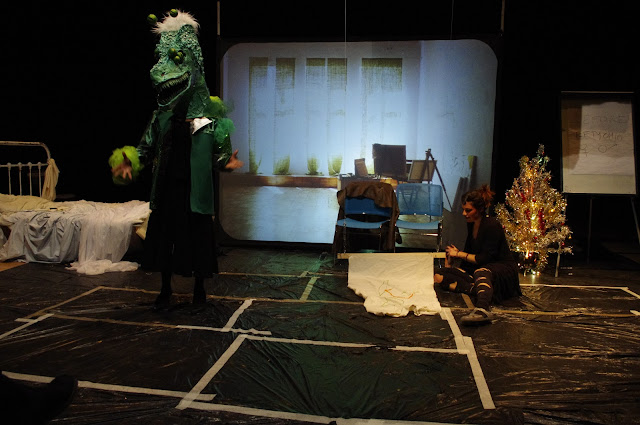 " I must rush to the planet Vulgus, where the fate of humanity is at stake. There will be no pity for monstrous monsters, I shall pulverise all the vulgar Vulgusiens with my super-power laser gun." 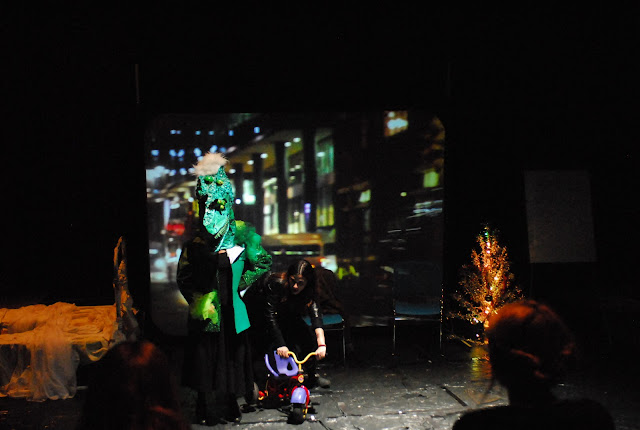 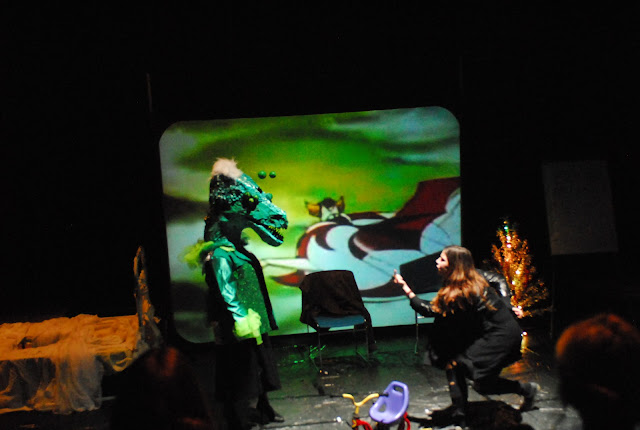 It was one of the comical elements of the show (the whole topic of the play was quite sad),  Everybody tried it and took pictures with it.
I get inspired by futuristic science fiction 80s aesthetic, comics and Japanese's cartoon which take place in space like Goldorak, Albator or Captain Future. 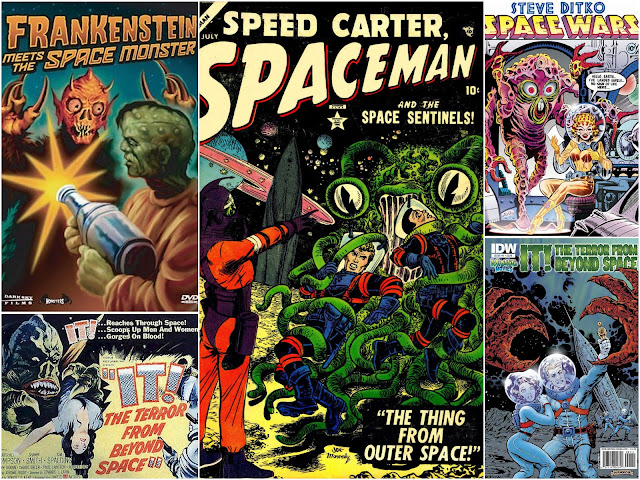 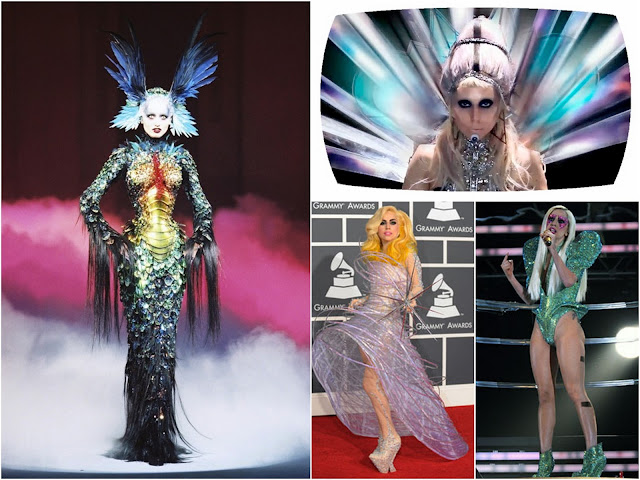 I had a unconscious reference which explain the "reptile look" of the space monster. (Someone in the audience thaught it was a crocodile), a dragon costume that my Mum made for my brother for Carnival when he was 7. My Brother was like "I WANT to go to carnival as a dragon" so my Mum  for who everything is possible just made one.  i didn't think about that directly, but my Mum saw the show and show me some pictures and I realised the space monster looked like the dragon costume. It's funny to see how  sometimes you get inspired by things you even don't realise it! 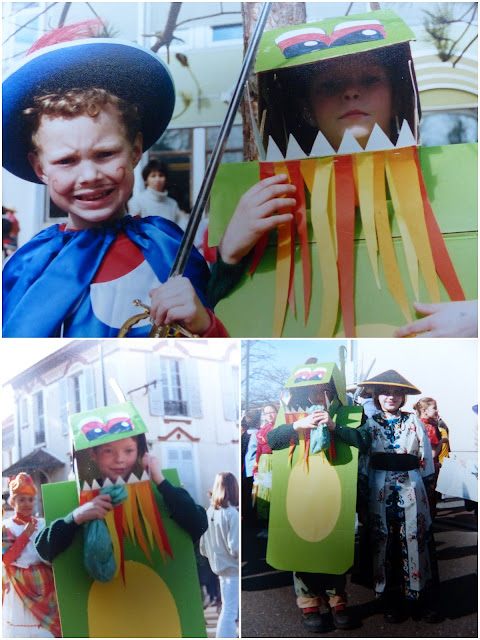 This costume has more to do with fine artist's skills than costume designer's one. It's kind of massive costume you find in theme park like Dinseyland, mascot for sport if event,  or worn in Covent garden by people dress as Queen Elizabeth. The kind of costume which is really hot, you sweat in it, really hard to walk with and you can't barely see what it in front of you. anyway it needs a structure, so I asked Cristina, the fine artist of our team to help me. We discuss different material to make the structure like foam but it was a bit expensive so we choose wire. While Cristina was making the structure, someone stepped on it on the tube so the mouth was a bit crooked but it gives to it this stupid haggard look that we really loved. 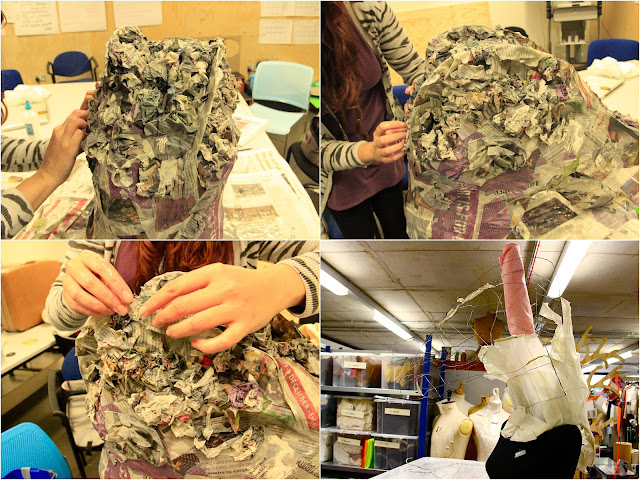 Then we covered the wire with paper maché. Sometimes I think: for my degree as was writing essay about the Russian formalism in French structuralism literature  in  and for my MA i'm specialised in paper mache". But i quite enjoy it, everything is about making, it's more practical. it's not just about theory, you have to experiment and put your hand in the glue if you want a result! For that, we stole newspaper at the entrance of the school. You know that you are in an art school when students take newspaper on the display  not to read them…but for making paper maché. 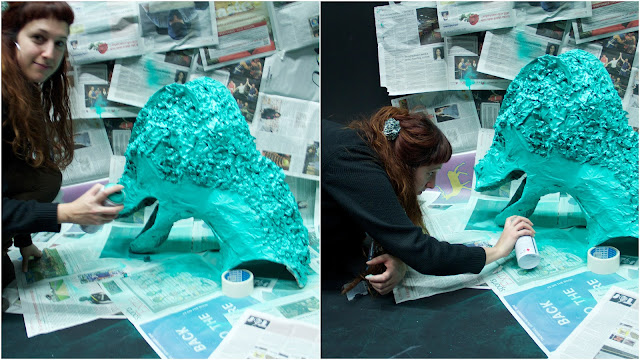 Then we sray the head in green and Cristina, added some extra colour to create volume, relief and texture as well as several eyes in polystyrene and fake white fur from the santa claus outfit for the hair. 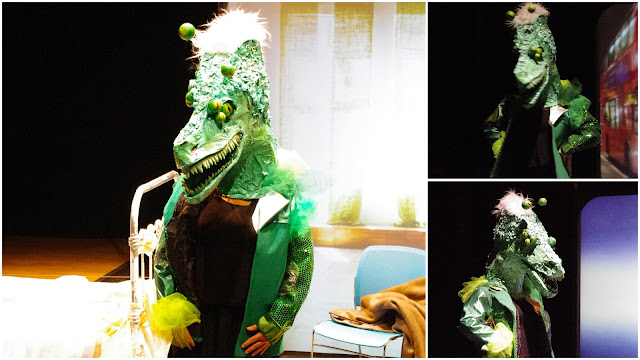 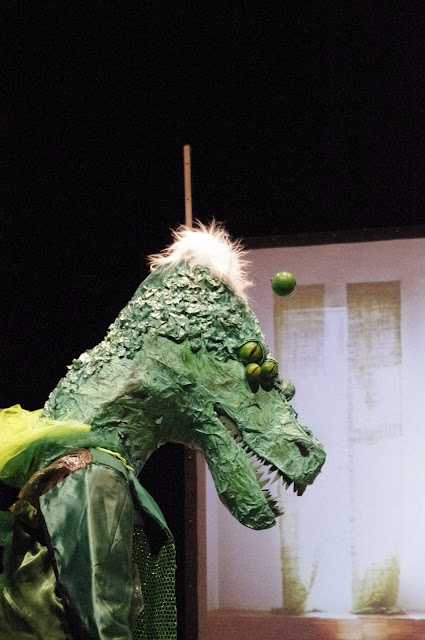 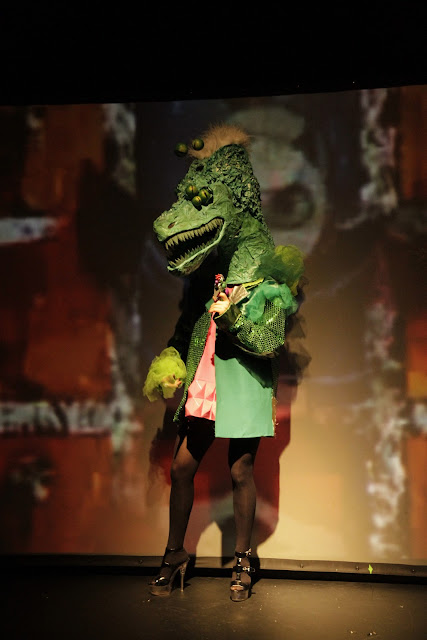 For the jacket, I found a leather one in a flee market and I decided to cover it with bits of different type of green an shiny fabric. Yueer and Simon helped me to stick them  with the glue gun directly on the jacket  because the leather was too thick for the sewing machine. 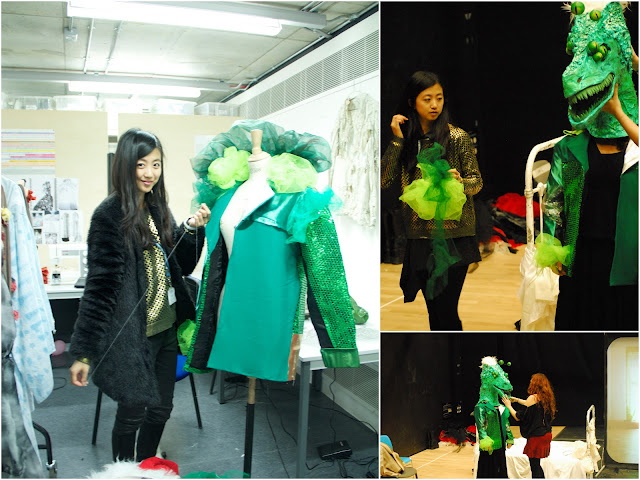 After the show, we made an experiment with my friend Sophie. There was a really big conference in Central Saint Martins, with important people from the Design world, people who came from business. I ask Sophie to walk among those people wearing the space monster head, and do some simple actions like going into the elevator, asking for food.
It was really funny, to see reactions of people, who stop talking, turn to watch her moves, even if some people doesn't seem to notice. From the top floor where I was shooting, it was  really funny ti see this green spot among  all black outfits! People thought it was a kind of happening for social acknowledgement, or a political cause, but it was free and aimless. In a way we perpetuate  the tradition of the crazy reputation of saint martins as an Art school. A way to introduce a surrealistic element in a formal and stiff-necked meeting. 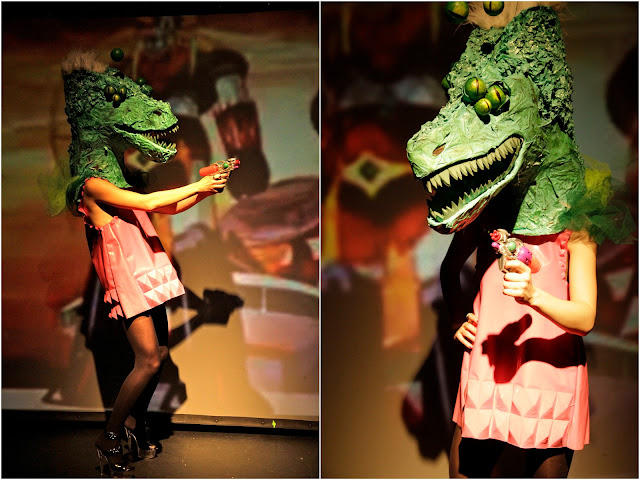 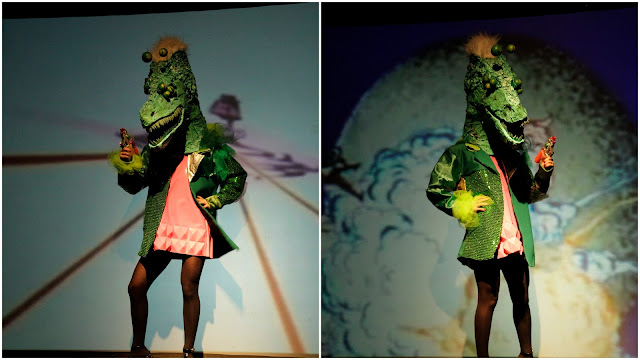 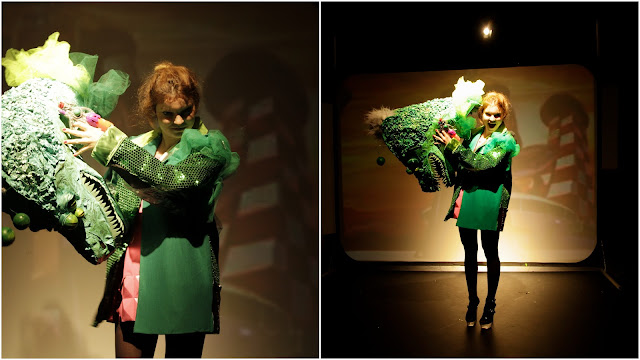