The woman with the wooden limbs 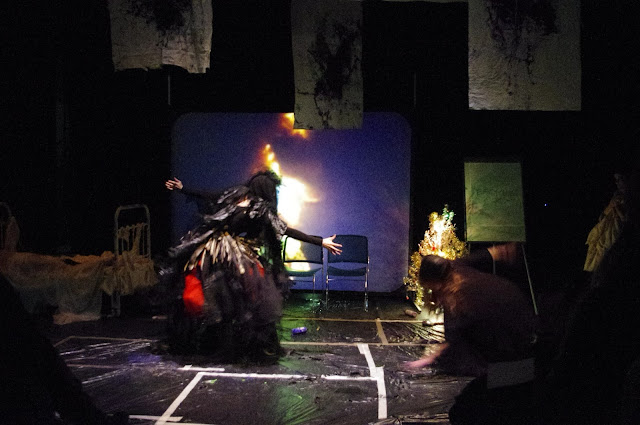 In the play Lost/found face that I adapted from the novel "Visage retrouvé" from Wajdi Mouawad and directed, performed in december, there was  a scary and nightmare creature which represented the war and all the fears of the main character.

the woman with the wooden limbs documentary/ making off 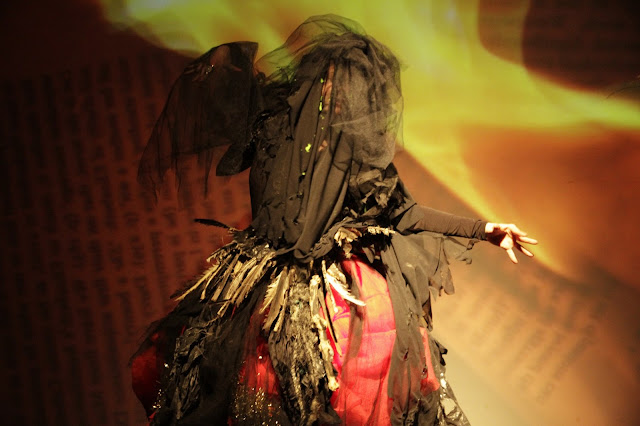 "I recognise her. Blind, blind, I’ve been blind! She was there, living in my anxieties  and in my night-times. She knocked me down each time it got dark,  she made my soul scream, she tormented my loneliness and I never recognised her! She was the focus of all my pain. Hidden in the unlit corners of my soul, she appeared at the very moment where, in the depth of an overwhelming darkness, I invoked light. The sudden brightness made me blind, and there she was- ready to devour me. I couldn’t see her face- I was too scared. And yet, today she reveals herself  to me: the woman with the wooden limbs has a pale face with long blond hair. I have lived for so long at her side without realising. It was her! It was her! The woman with the wooden limbs." 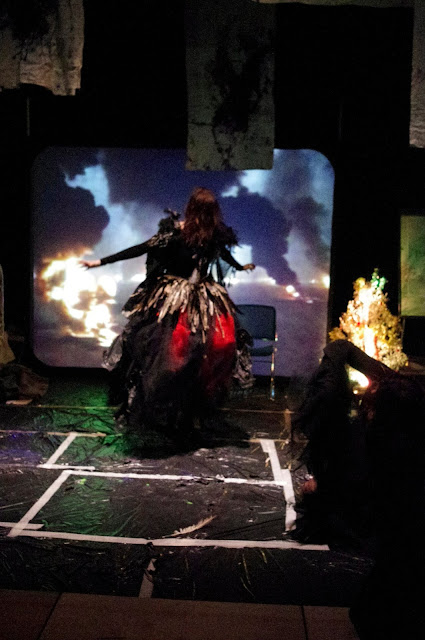 The challenge was to put on stage a nightmare vision an allegory of all human fear that this woman epitomises, the costume had to be really scary. 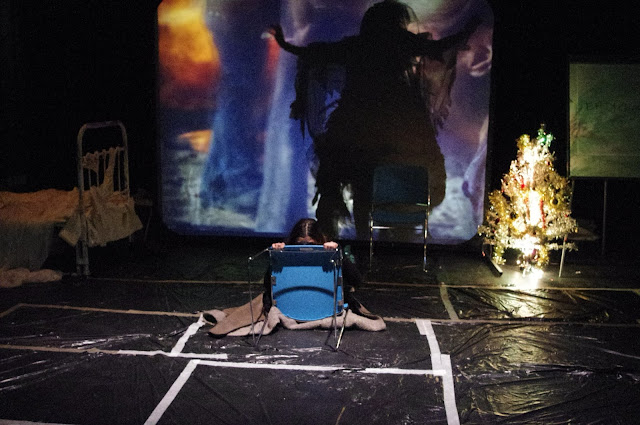 When I show the script to one of my friend she was:
"The door opens, and a pack of wolves, massive white wolves from the North, invade the room, jump on the woman with the wooden limbs and devour her. " how the heels are you going to do that on a stage???"
This is the magic of theatre, everything is possible as long as you have the suspension of disbelief. Cristina made for me an animation with hundreds of drawing of wolfs running and the actress Liz was going behind the screen and her shadow was cross by the wolfs. 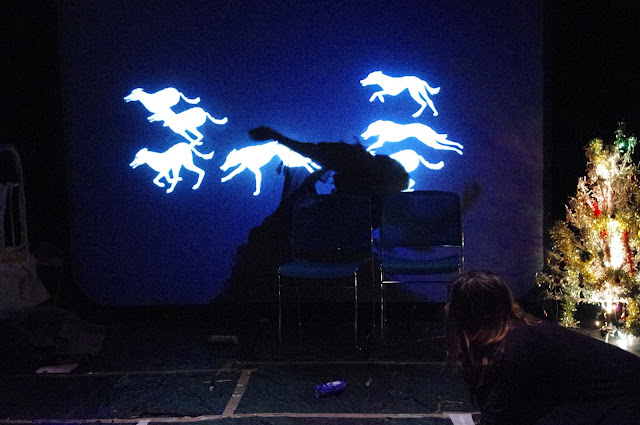 The character had to epitomise death so I got inspired by Sicilian and Corsican widow and their black veils. 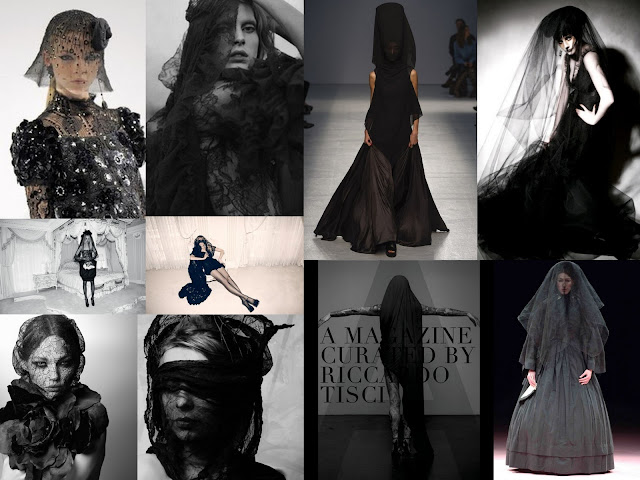 I wanted the character embodied by a dancer and I get inspired by african tribal dance, Bûto, flamenco, indian traditional dance like Khatakali or Theyham. 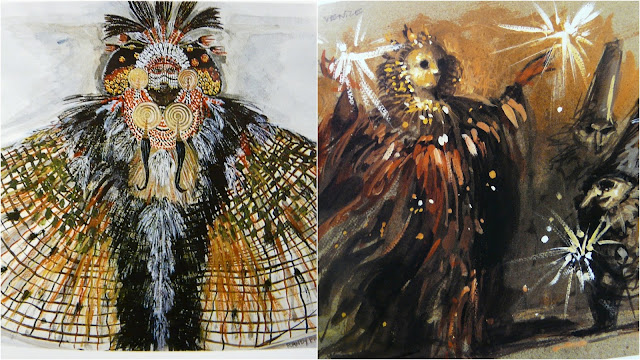 I was also inspired by tribal costume in the way they make it resorting to natural element, because the woman has wooden limbs I wanted something quite organic. Because the costume has several layers it refers to Indian traditional costume that I had the opportunity to study during an oversea placement in Kerala. In Kathakali, performers take hours to be ready. The preparation becomes itself a kind of ceremonial, for example they need help to roll up layers of fabric on a rope to make volume on the skirt. Theyyams have big structure costume made with palm leafs, where the performer become part and parcel of a massive installation. 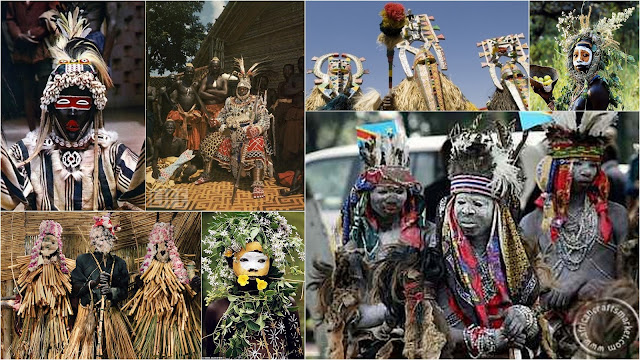 I wanted to create a kind of black Theyyam who become God during the ceremony, a tribal witch using black magic in a voodoo or shamanic tradition.
Theyyam also dance with fire, with coconuts balls soaked with  oil attached to the skirt. It's very spectacular and dangerous, some of them die during the performance! Obviously for  health and safety reason  I wasn't able to have real fire on stage so everything was video projected. 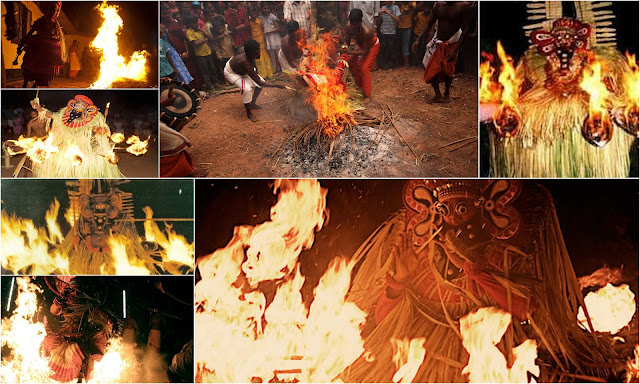 Diane Pernet was  post-inspiration, when he saw the costume one of my friend said it's look like Diane Pernet, this fashion  and costume designer in the1980s 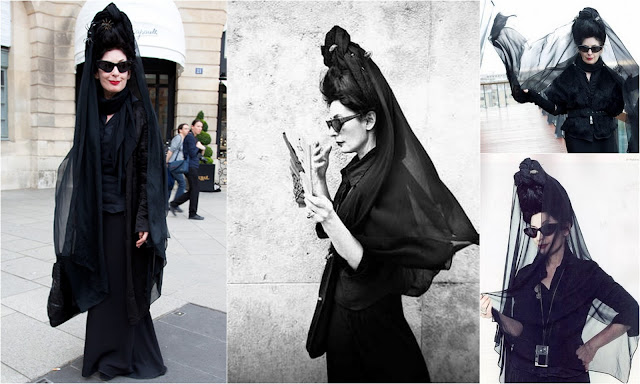 Because I made the costume for a dancer it had to be comfortable even if it had a massive structure. The basis id make from several layers of skirts, and a black lycra suit.
I found the pieces of wood during the shooting of Yueer project at Seven Sister Cliff near Brighton. I was running like crazy in a white net dress to collect as much as possible drift wood and seagull feathers. A nice vision for sunday rambler. I came back in the train for London with two huge plastic bags full of wet dirty sandy wood as a kids coming back with shells collected on the beach. I didn't plan to collect them during Yueer project (Sophie we are shooting know, could you come here and leave the wood somewhere!") but to make my costume I always start from what I find ad what nature can offer to me. And actually drift wood is very light with really nice shape and a friend told me, "for me feather represents death". 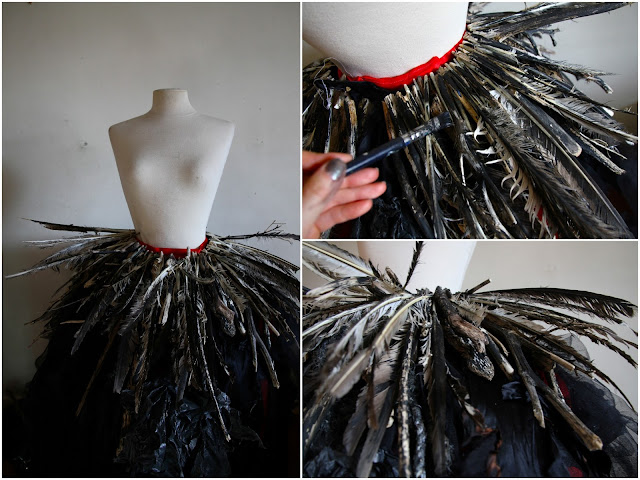 Then I paint the feather and the wood in black to give it a "oiled bird" aesthetic".
I went to the costume department to ask a dive for the skirt because I had to create a structure strong enough to hold heavy pieces of wood and stay stable. They gave me a kind of cable reinforced with wire inside that you can see on so I made a hold in every pieces of wood and feathers and stitched them to the cable. 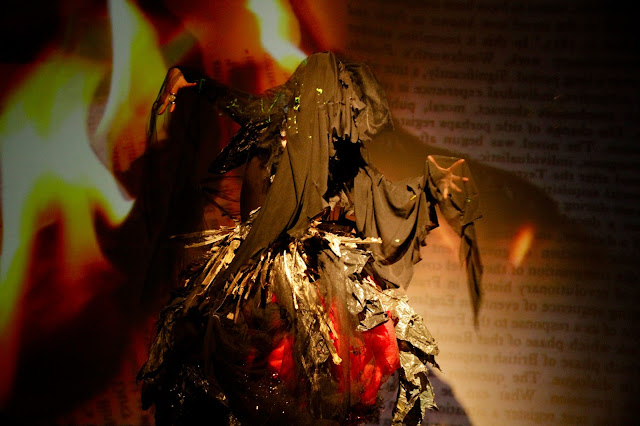 Then I use black rubbish bag, black net, fabric and chiffon that I burnt and destroyed. I started burning the fabric and plastic bag ( I liked the combination of different material like plastic and fabric) but I nearly net the house in fire. So I finished destroying and tearing the fabric to give it a "burning effect". It's interesting to see that sometimes you get a better effect by using another way, burning made the fabric stunted wereas tearing make it as  if it was bun.

Eventually, I have to take the costume from home to school on my bike,  I was quite epic, and I loose some piece of wood on the street. I stored in the costume department, but the structure was so heavy that it fall several time. 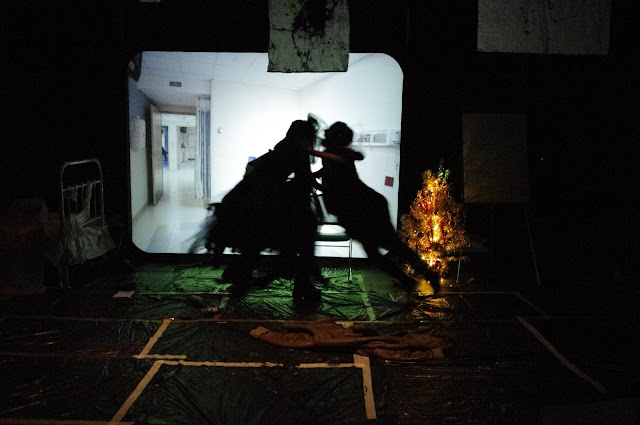 I wanted to make this costume a dance experiment with back and front projections. I imagined a to have broken stuttered, dislocated, quite mechanical dance movements. I wanted big movements with the arms in order to project on the veils videos of war and flame as is she was a "burning woman".
So Liz, my wonderful performer improvise improvised movements  according to the  music the speech and  built a choreography playing  around the constraints of the heavy and stiff  costume. Because Effie, the main character fight with her nightmare at the end of the play, creepy crakes of wood were added to the macabre dance.

Trying the costume, I found out that I was very demanding with  Liz  who never complained  about it! The costume is so heavy that the  slightest effort make you sweat a lot and the slightest movement is really hard. The physicality of the part was emphasised by  big  gothic boots with heels to create instability in the movements. 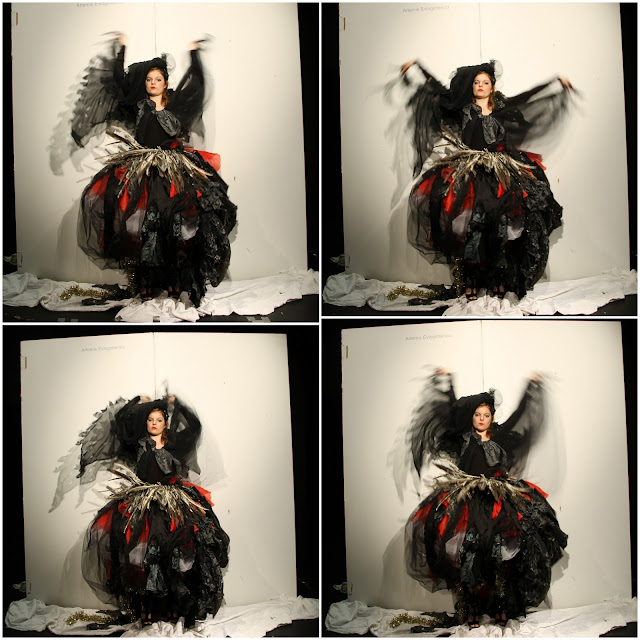