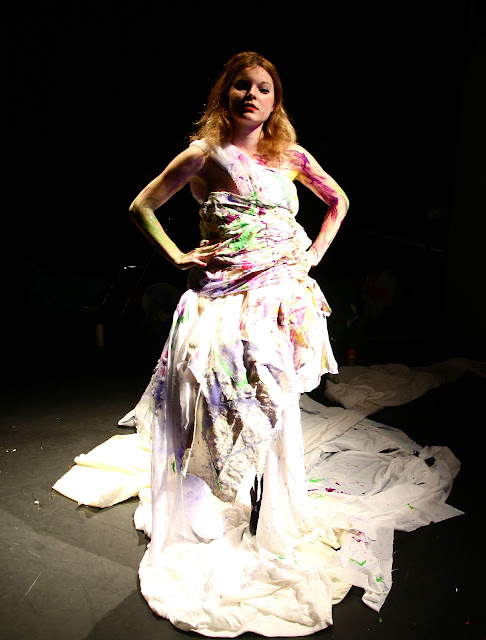 "But my mother’s real face started to fade away from my mind. I started drawing, to revive it. Drawing the memory of her. At first it was a bit clumsy, you couldn't recognise any features: her eyes, her nose, her pointy ears, the face has no depth, absolutely no perspective, I didn't know how to do it.  Now I know a bit more and I’m getting closer to re-creating my memory"

In my show Lost/found face that I directed in december 2012, the main character Effie attempts to recreate the lost face and find her one self  through painting. So I wanted to introduce fine art in performance, and create of multidisciplinary piece where drama  is intertwined with video, music and painting. I always loved theatre as complete art form because i've never been able to choose between literature, fine art, music and cinema so with performance you can have everything at once! 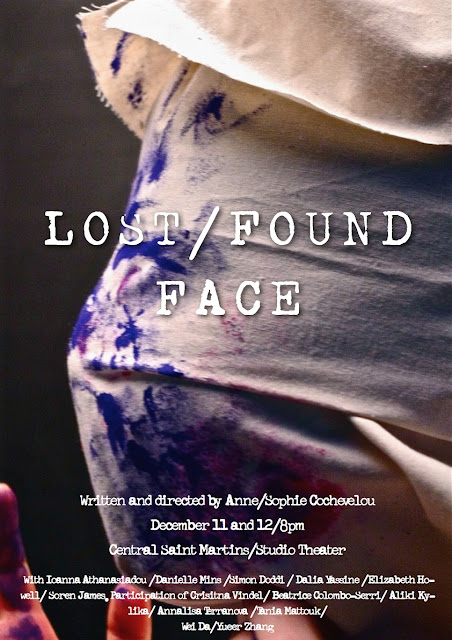 Usually fine art is present in theatre, but at the stage of the making, when you have to paint set or props. And yet, I wanted to have a central part on stage and create a kind of chromatic performance. You can see that theatre is inspired by painting when we call a scene a "tableau" (panting in French) for its plastic and aesthetic composition.

The trailer of the show:


"With the passage of years, the silence is changed into colours spread with fury onto an overwhelming canvas. Painting is where I tried to recreate the shapes of loved and lost faces, as well as their poetry, their anger and their grief. Hundreds of paintings where space came to light in a roar of blue with thousands of shades. Traveling through beauty I dived deep into the heart of violence, and the sorrow that had made my life drag on so." 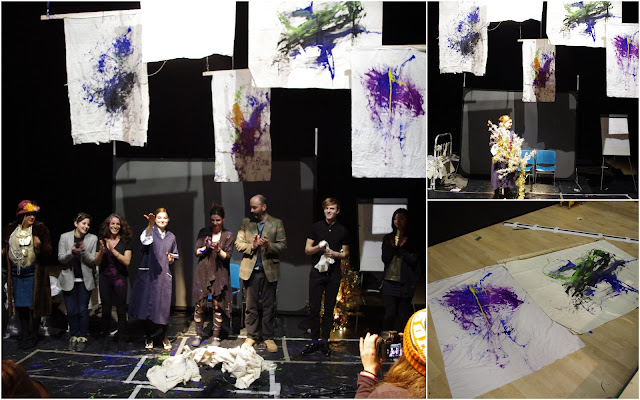 In an happening which can be a performance art, the accent is putting more on the process than on the final result. For example, Yves Klein wanted to record the body's physical energy. The body prints on canvas reminded him of the imprints left on the judo mat after one participant had fallen in a contest. To make these paintings, nude models who Klein called "living brushes" covered themselves in blue paint and placed their bodies on white paper laid out on walls and floor.

After seeing the show, my Mum send me the link of the Yves Saint Laurent TV advert with Jessica Chastain, resorting to the same body painting than in my show, I haven't seen it before designing my own piece, i don't know maybe it's something in the air, performance is the new trend :
I wanted something messy and dirty to counterbalance with the video projection and put one stage something tangible and organic. I didn't want a cold and sanitized show, I wanted to  take the risk to splash audience and create a mess. I have to cover the whole with plastic bags (but it went so messy so have to clean up the whole surface after the show…)
It is a performance in the sense that, it deals with chance hazard and the unknown something unique is happening  who can never be reproduced (the canvas were really difference between the two shows). We never actually rehearse the painting bit before the actual show (because we didn't have enough canvas and enough paint) so we didn't really know which will come out of this experiment.  I was really angry the last show wasn't recorded (stupid batterie)  but Iris my roommate told me "There is no trace of what happened tonight you went through the performance!" 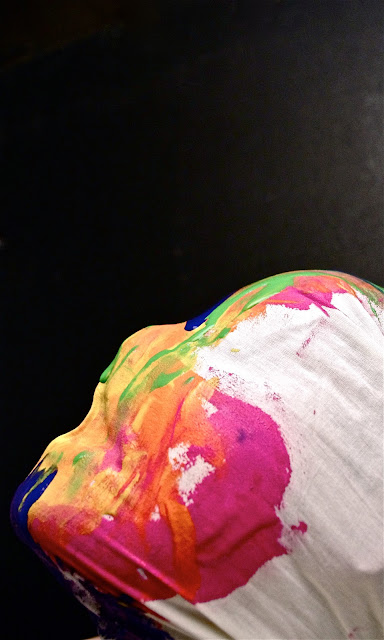 At the beginning we tried to make face with watercolour, but it wasn't "creamy" enough so I had  cycle till a (really-far) early-learing centre and get children-paint.  It was written "non-toxic on it but it was still burning the face  hurting on the face. I make life tough for my performers... 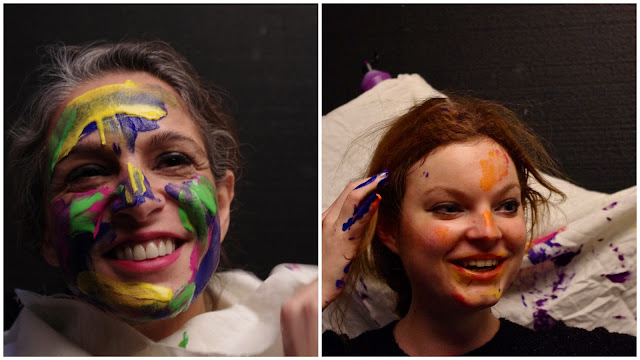 Thanks to a clever mechanism made with hook and pulleys designed by Aliki the architect of the group , we could hang the canvas to the ceiling at different level and make them going up and down really easily.
So, The "painting element" came up on stage on several "key moments:
" I wish she had died quietly. Heart attack, thrombosis, drowning, or a car accident. Something sharp, neat, definitive at the first try. Without any ominous symptoms, or treatment, or chemo, or radio, or any other shit." 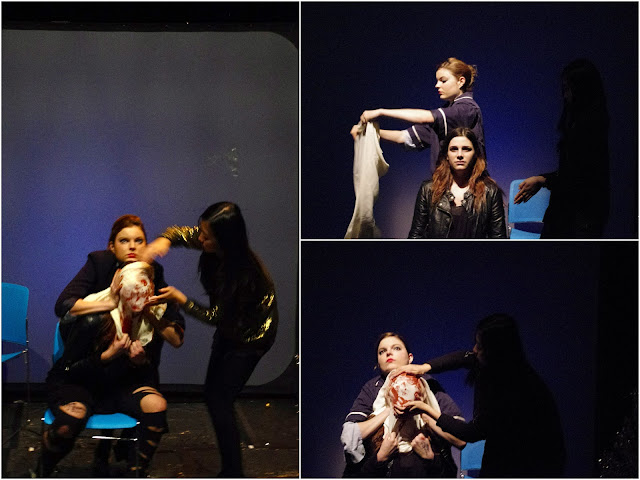 it's a kind of last moment things, during the prerecorded speech I decided to suffocate (no for real obviously!) Ioanna with a piece of canvas, and Yueer was putting some red paint on the canvas as if she was taking care of her? i liked this mix of violence and gentleness which made this torture scene quite ambiguous. 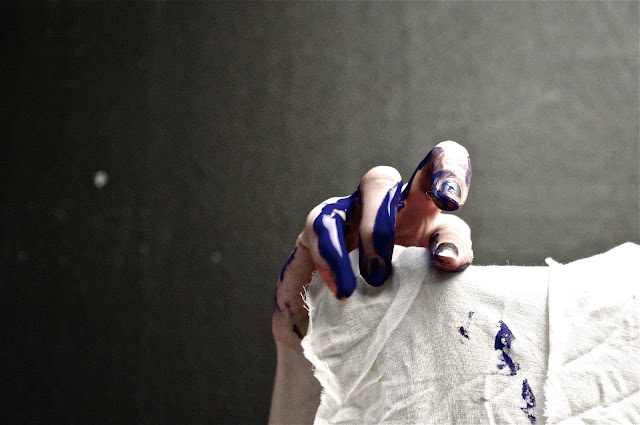 "There is no escape anymore. Fuck. Before, there were back doors in my mind. In hopeless situations, I managed to find a way out. For a long time, I painted without telling anyone, and those colours and gestures were the only place I was free. They could give me an earful, hit me, kill me, I’d say: Yes, but me, I'm painting. And it was my way of grappling with life" 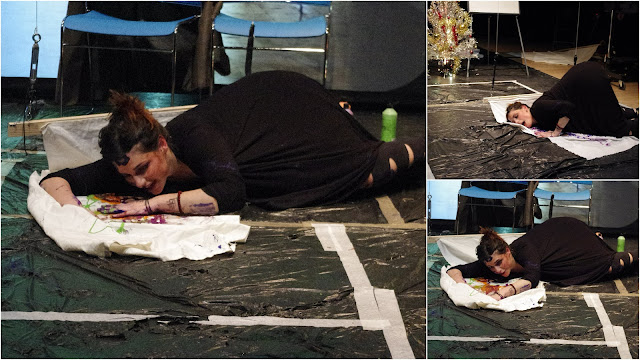 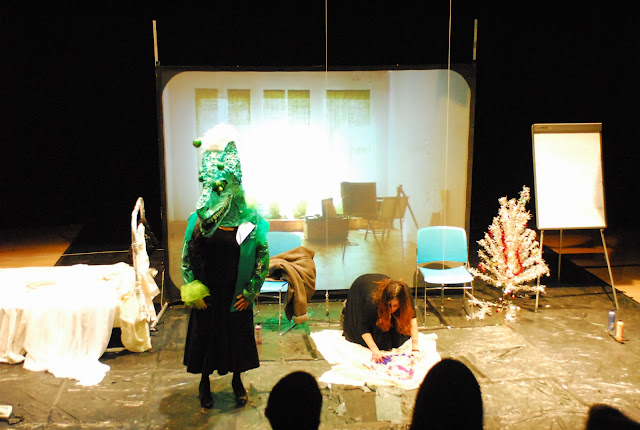 Mother:  What are you doing with your life, Effie?
Effie:   I've been painting mum.
Mother: But, I mean, what’s your job?
Effie:  I'm going to paint. Painting.
Mother:  Not that old story again
Effie:  It's not a story, mother.  I’m doing portraits.
Mother`: Portraits? What portraits? What are you talking about? Portraits of what?
Effie Of you…of your face…to remember…to not forget you..I'm going to paint.


I wish I’d known you, Mother, but we were kept apart by so much fear. From now on, you will be at the heart of all my colours. I'm sorry for all the worry. 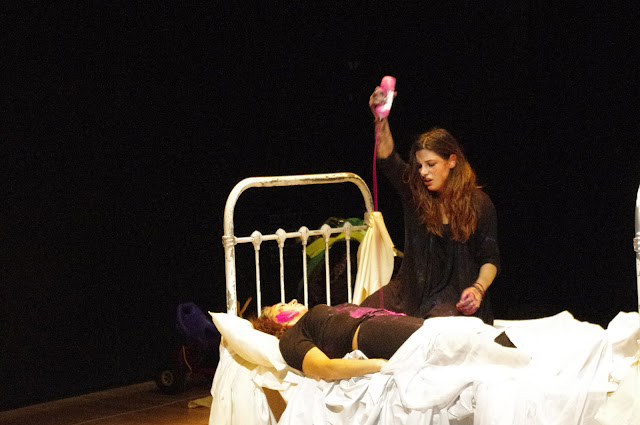 During this scene, Effie try to recreate the memory of the lost face of her mother, she puts some paint on the mother's body and put the canvas on the top of it to create a kind of stencil. 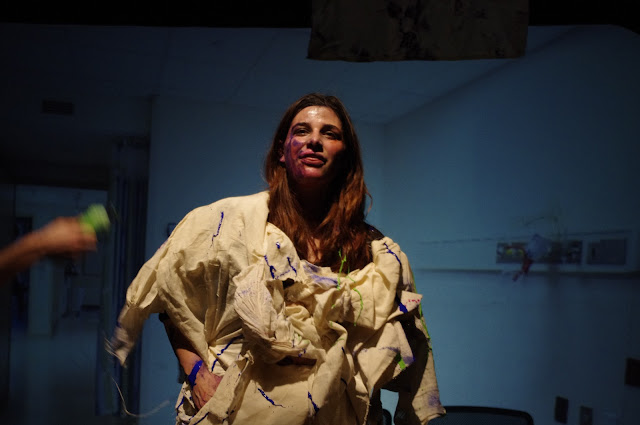 I turned the last scene in a kind of pagan baptism ritual. Ioanna was singing a Greek lolyby wile Simon and I where dressing her up with the white canvas dress and splashing paint on her. The idea that when Effie complete the puzzle of her memory through the portrait of her mother, he find her identity and can become her own masterpiece. 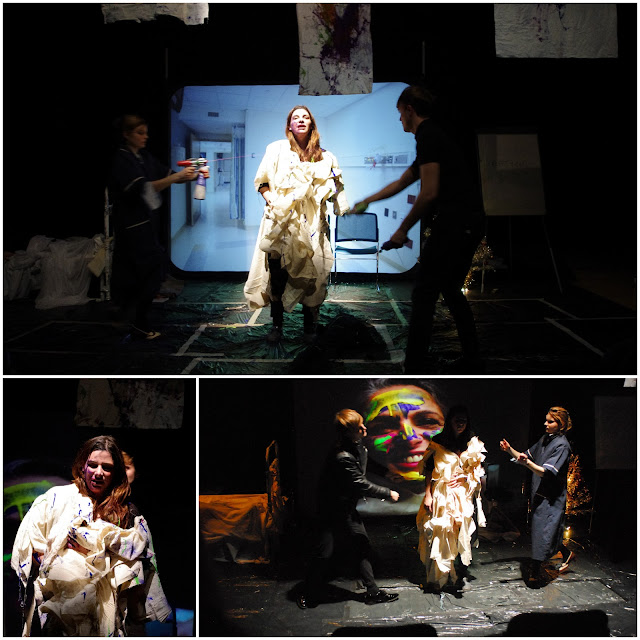 For this scene I was inspired like for my fine art dress by the Alexander Mac Queen Show where they spray live paint of a white dress which become an unprecedented creation.

I made 2 dresses  (one for each show because when one is ruined you can't use it again) using canvas, same material that artists use for their paintings and the splash of the painting create a beautiful coloured pattern on the fabric. 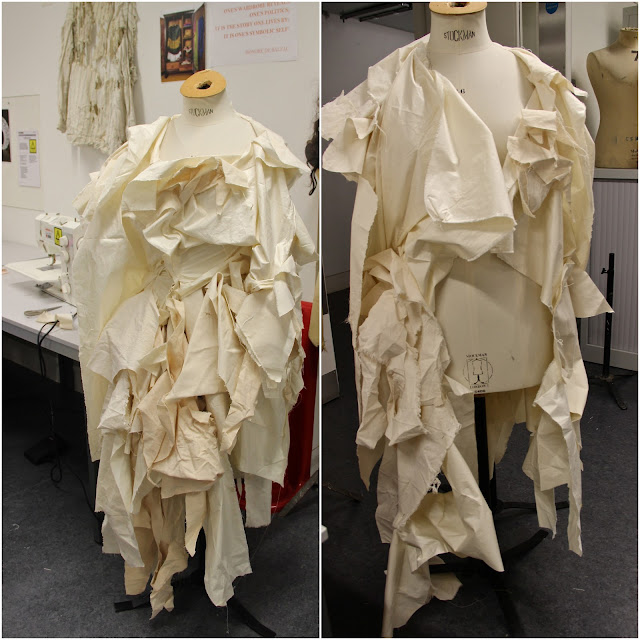 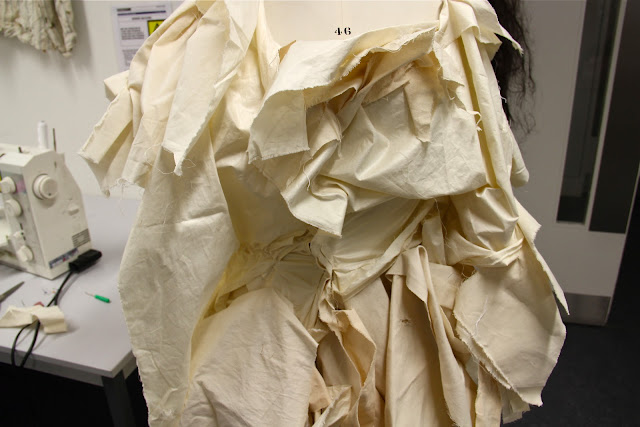 I wanted to reproduce the experiment on me but They throw away my canvas dress from the show so I just made up a dress with some piece of sheet and canvas.

Cristina and Wei Da splashed the white dress with paint which became multicolour. What I found interesting it's that at the same time it's quite a violent action but it's also an act of creation through the destruction of the dress

I had to take shower at uni (the advantage of having a performance department in the school) because i couldn't come back home full of paint! 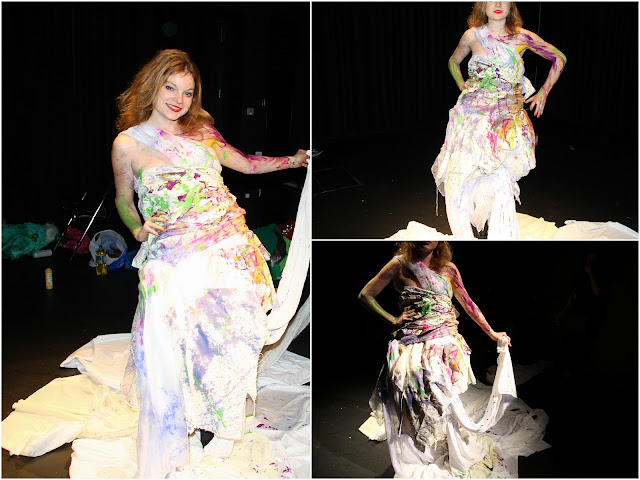 I took some of the canvas for the decoration of my room (the advantage of being a theatre maker, you can use your own set for your house and feel like you are living in your play).  I found them really beautiful because, they are realised by Ioanna in the intensity of the moment with a density of feelings and emotions, in the frame of a  specific theatrical process. 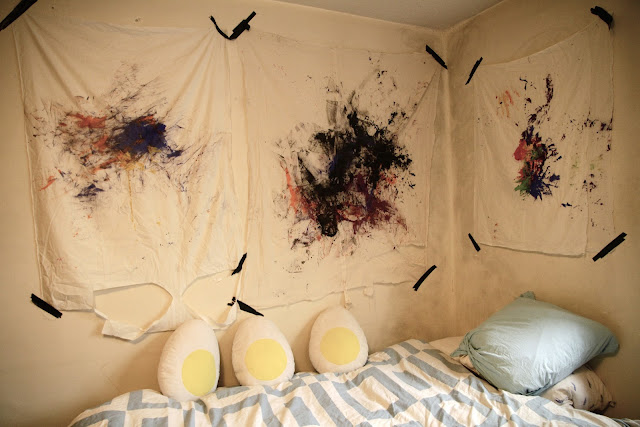 Even if it's totally improvised, even if you can obtain the same result by attaching a brush on a donkey's tail when i'm looking at them I can find the words of my text through the colours.
Publié par Anne sophie cochevelou à 09:44