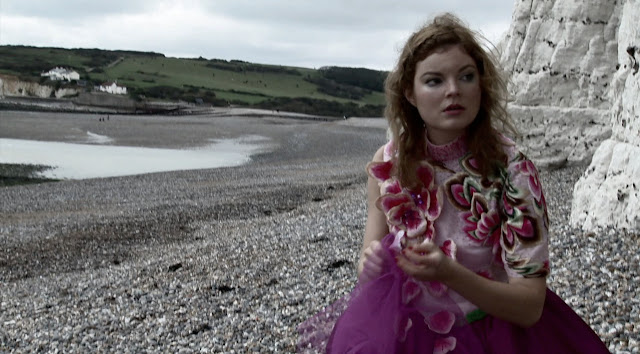 I like making costume but I also like wearing other people's costume, especially my friend and costume designer Yueer's creation which are always really enchanting, otherworldly and wonderfully made! 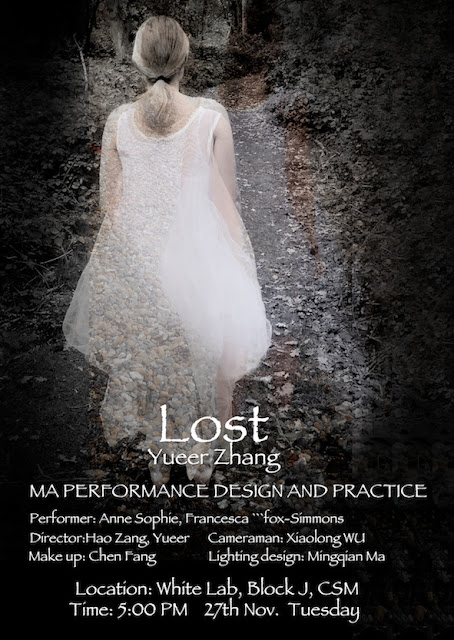 I performed in this costume based project. It was a multimedia performance including pre-recorded material and live performance. In Yueer work, it's not like in a play where you create a costume to embody a character, it is the other way round, the narrative come from the costume and all the story revolves around it. 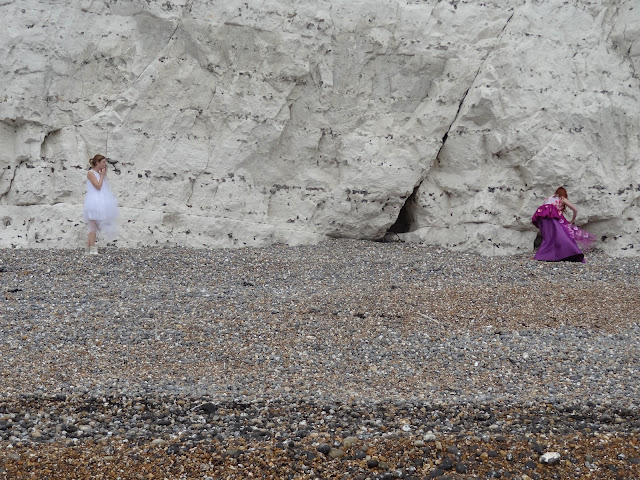 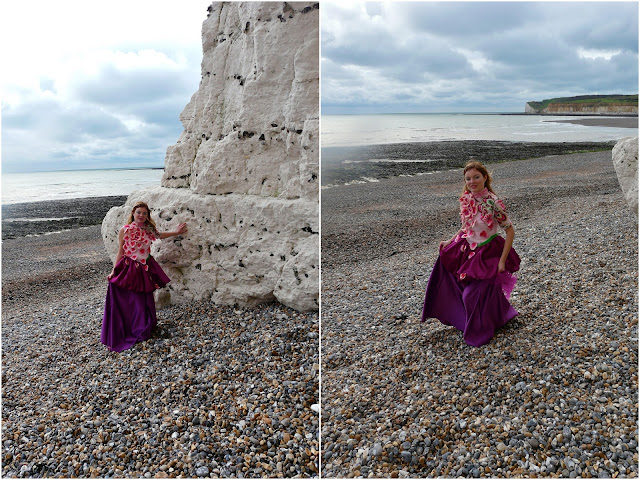 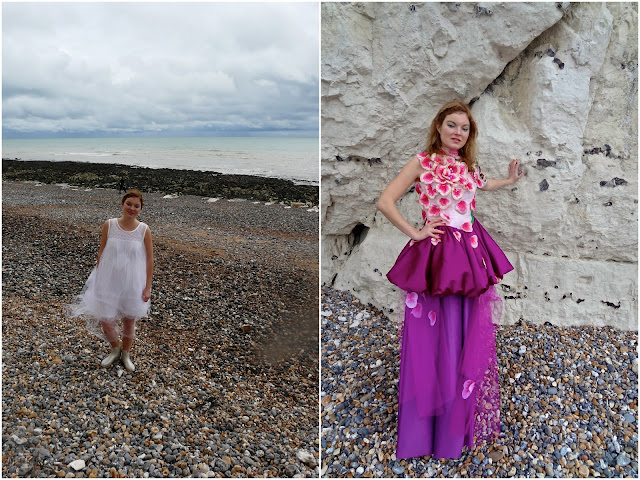 We shoot the movie in two parts, first in Wimbeldon forest, then in Seven Sister Cliff near Brighton, because Yueer wanted a white background and she wanted to  experiment shooting outside and in a natural environment. 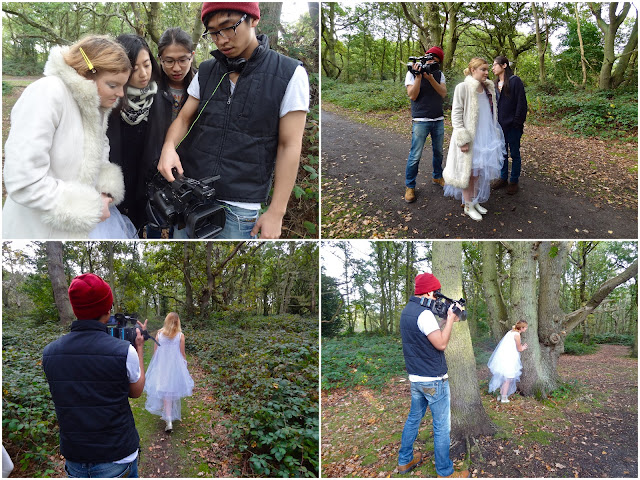 So we had to deal with climatic elements like rain in the forest, and the cold on the cliff. We probably went on the coolest day of november and I was just wearing this light white net dress  but Yueer was really careful and far-sighted and put some warming pads in the dress in order to keep the body warm. So this shooting was a kind of expedition, it was good to see the sea and escape from the city one day! This is on this beach that I found all the drift wood for the woman with the wooden limbs costume. 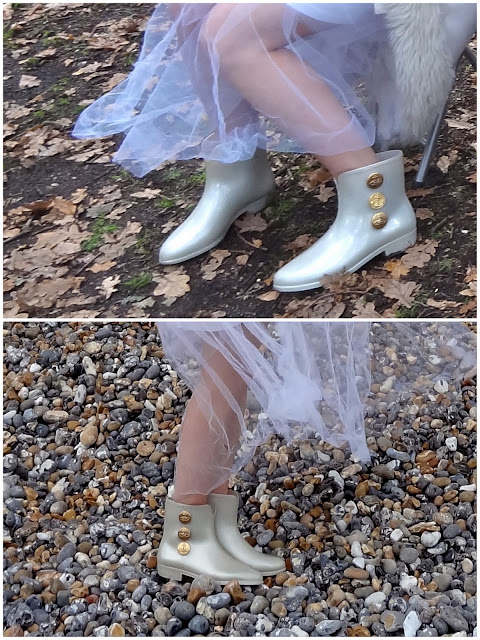 I'm wearing my Vivienne Westwood boots, they a bit too small for me. I found them on a flee market for really cheap so I  absolutely wanted to buy it even if they wasn't my size. want them found them in a flee market and they are white, perfect for the mud or the sand of the beach.
The flower dress by the costume designer "I tried to tell a story using symbolic costume. This is a test that I designed and made the costumes firstly, then created a script based on the costumes. Finally, I want to use a video to combine two parts. This is a story about Emily, who lost in her own world. In her mind, she is always controlled by someone else. She tries to imitate，follow and copy every movements of that person who actually is not exist". 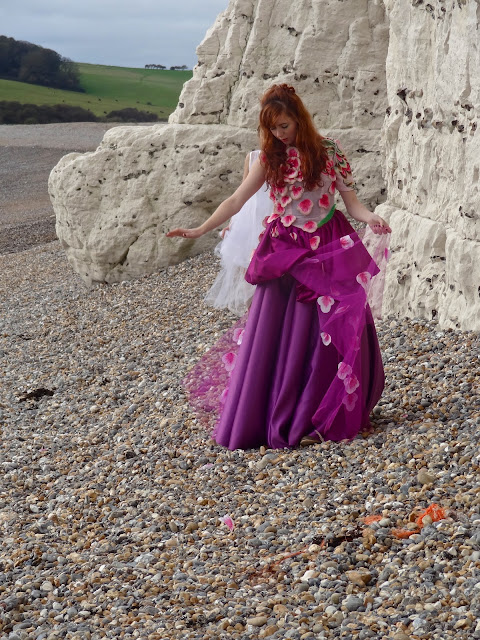 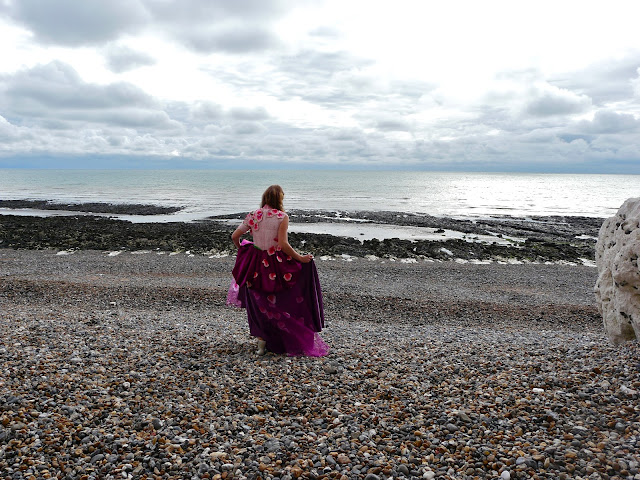 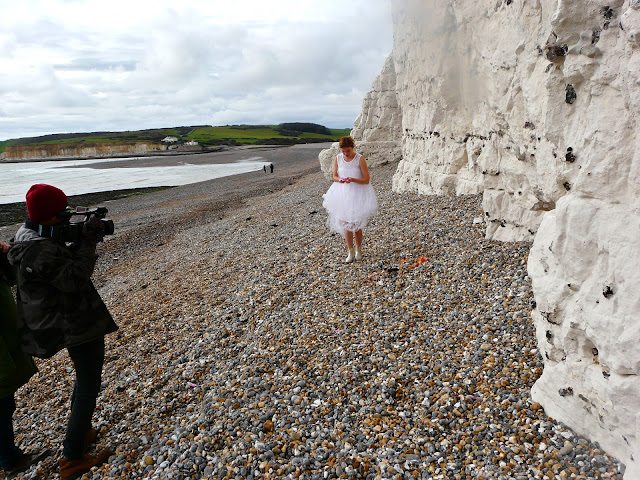 I see this piece as a quest of identity in a postmodern world. A girl who can't make the difference between her fantasy and reality. She want to look like an elegant woman, by wearing the same dress She is in the illusion that if she is wearing the dress she will become this woman.

Script of the movie:
Emily  She looks alone and helpless. She is walking and looking around, then going to a forest. 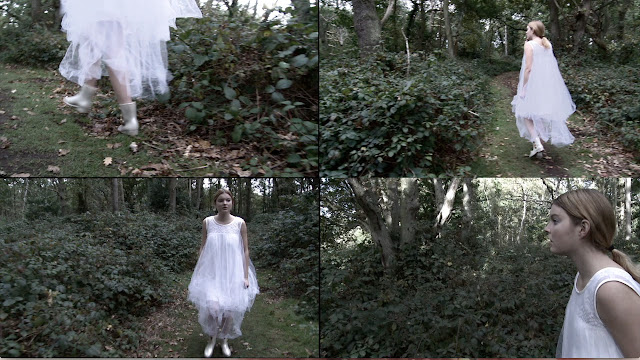 Suddenly, she sees a beautiful flower dress under the tree. She is exciting and interested into whose dress. She can not wait to take off her cloth and put the beautiful dress on. 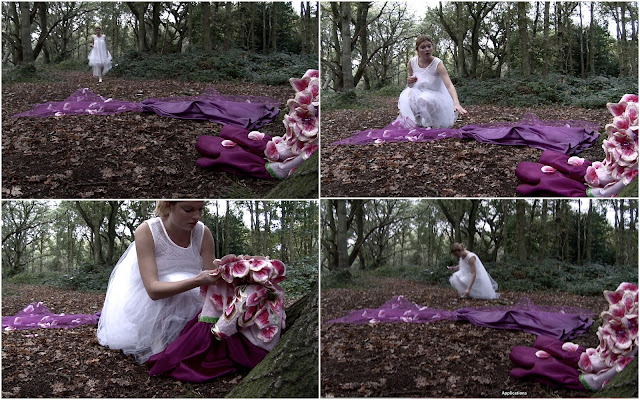 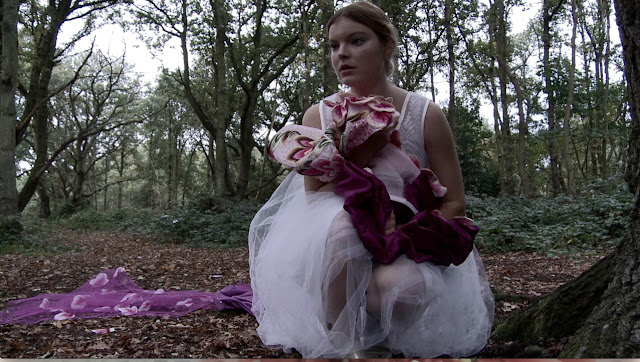 Emily suddenly find a Lady who wears the beautiful dress walking in the forest. This is an elegant lady and walking slowly as well. Sometimes she seems to look back. Emily follows the beautiful lady, but she is also afraid the lady finds her. They are walking and walking… 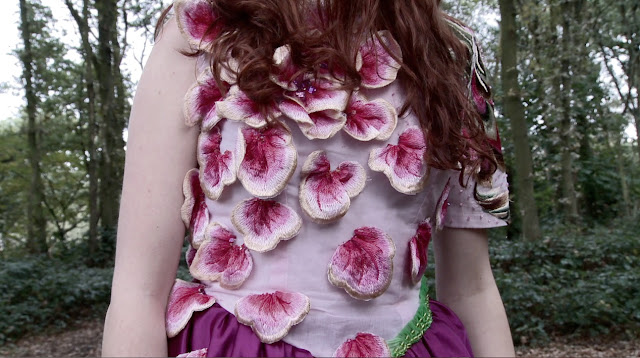 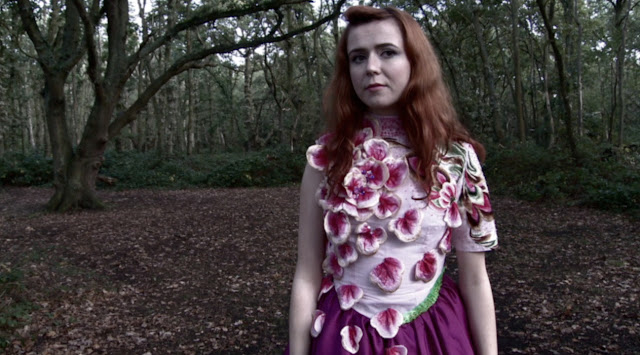 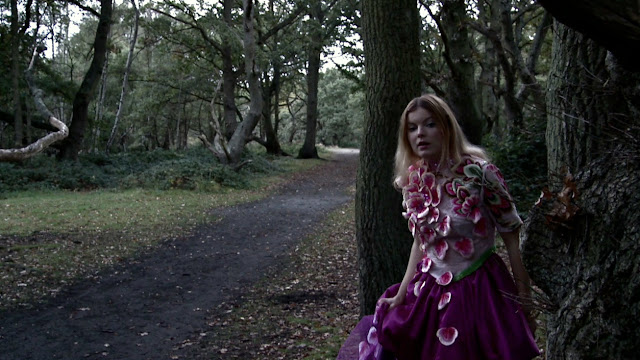 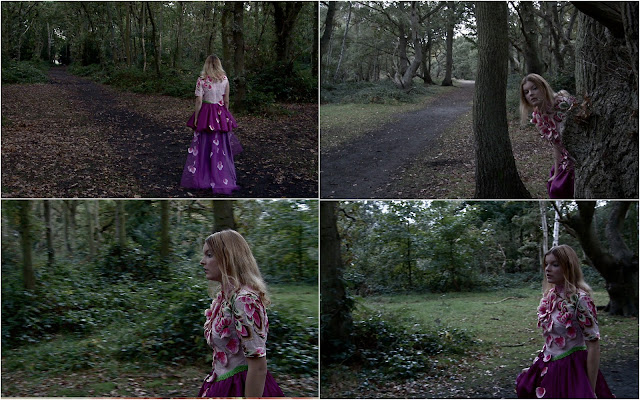 Emily follows the lady to the cliff. This is a clear area without any trees, weeds and leaves. The lady looks more beautiful and the detail of the flower dress can be seen clearly. However, the lady is starting to split petals on the dress， then throw them on the ground. Emily is scared, but she is afraid to stop this. She also really wants to pick up those beautiful petals. 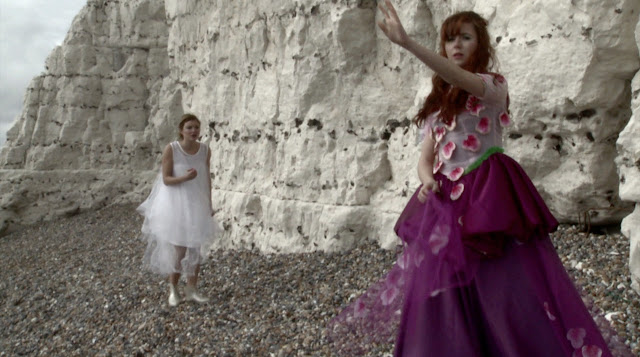 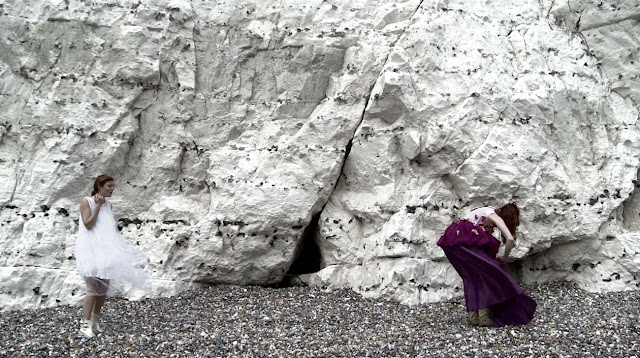 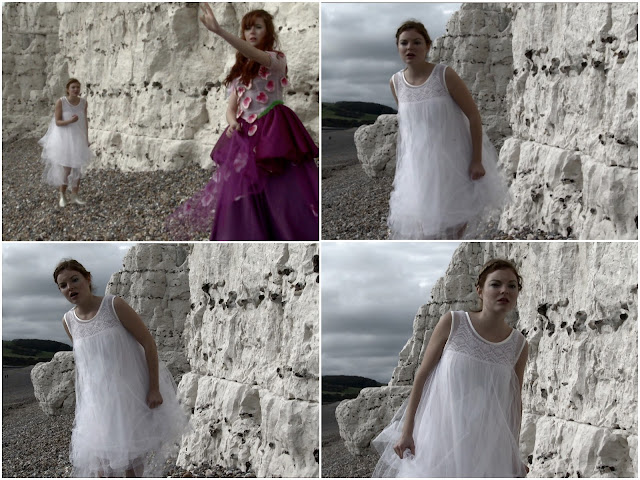 Emily becomes the Lady with the flower dress and split petals piece and piece. She becomes angry and rude. Her movements and her body twist ugly. 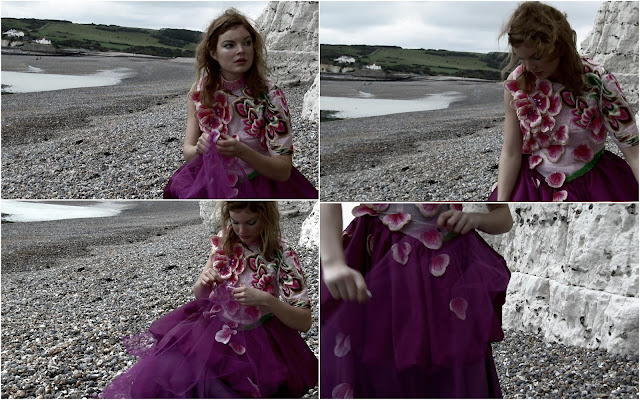 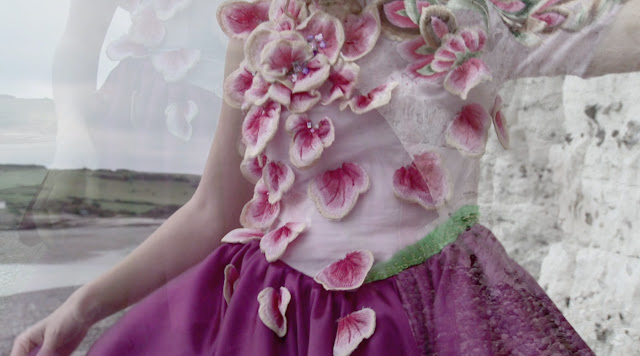 The lady splits the petals piece and piece and tears some piece. Finally, she even splits her skirt pieces, which are one part of the whole dress. She feels relax, breath deeply and calm down 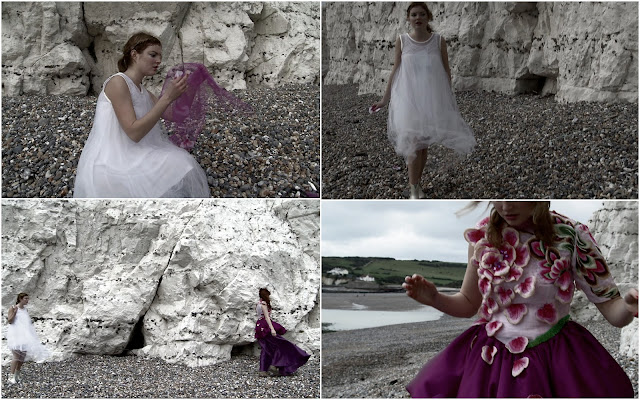 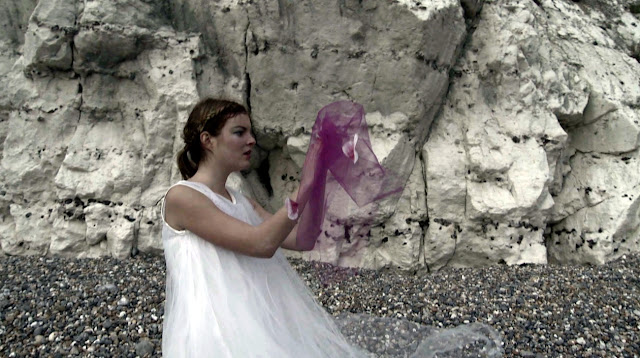 During the performance, I had to pick up the petals on the floor stitch them on my dress with a safety pins, Then come back behind the black fabric and change from the white dress to the black dress during the projection of the movie. 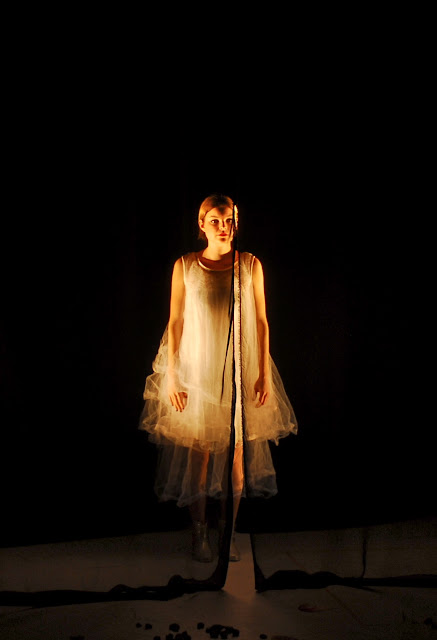 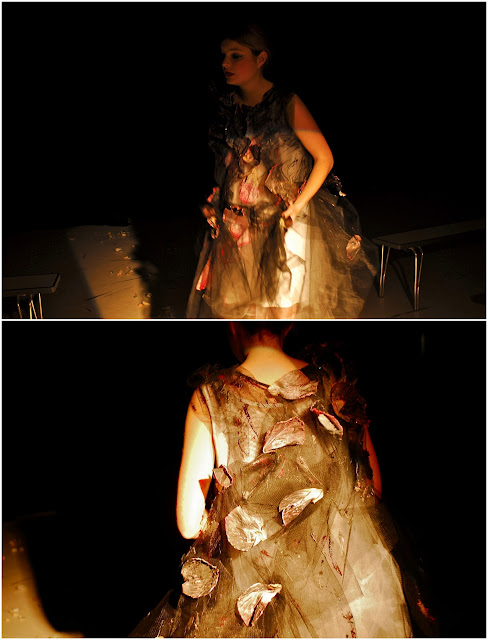 Fortunalty, I hade someone behind the screen with me to tell me when the movie was over and come back on stage.  Then I have to ask the audience (in French!) is they have seen the flower lady , then disappear behind the black curtain looking really disappointed. 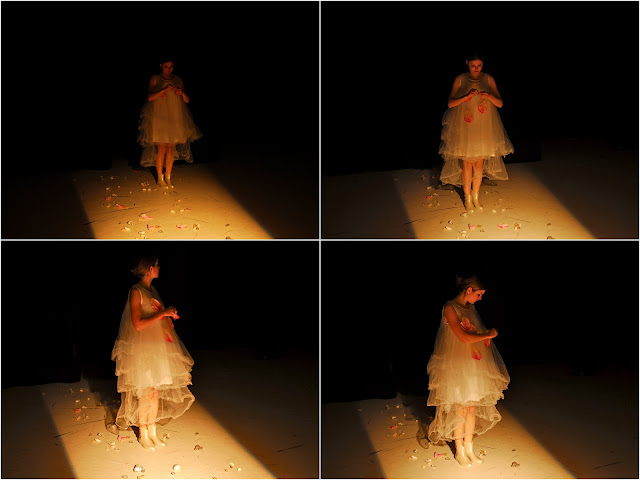 I saw it a bit like an anti-Yoko Uno cutting piece.  In this piece performed in 1964, the artist sat kneeling on the concert hall stage, wearing her best suit of clothing, with a pair of scissors placed on the floor in front of her. Members of the audience were invited to approach the stage, one at a time, and cut a bit of her clothes off – which they were allowed to keep.

Cut Piece had one destructive verb as its instruction: "Cut." I like in performance when you have some interaction with the costume or live transformation and metamorphosis, when you destroy or you add some element on it in from of an audience and not on the backstage. 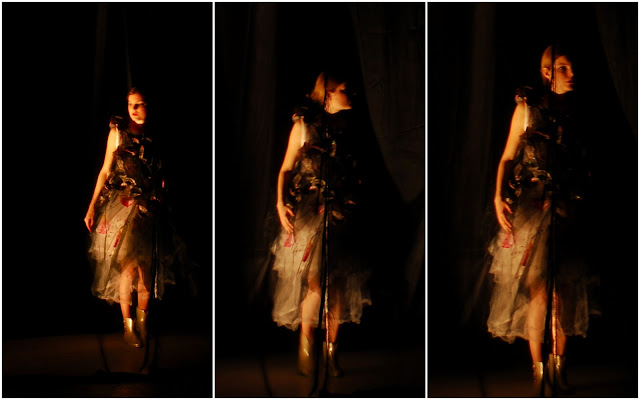 Yueer piece is both because in the movie, the flower lady tear apart the petal on the dress but on the performance Emily embellishes the dress buy adding some petal to it. But this action is not enough to make her like the flower lady, so the petals fade and become a black dress.