What could be better than ending up the year with one of my major project on 2015? 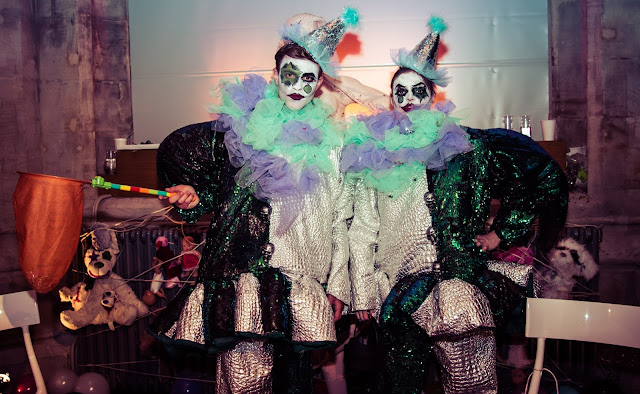 I was lucky to have the opportunity to collaborate with the ground-breaking new performance collective Future us, for its inaugural Barbican Halloween Ball on Saturday 31 October 2015. The event was set amongst the atmospheric crypts of The Guildhall, in the heart of the City of London.  Future us created an array of immersive theatrical experiences and interactive games. Guests were greeted by a roving cast of performers, who invited guests to participate in Halloween games and experiences designed to fright and delight, creating original site-specific works in this important and historic building. 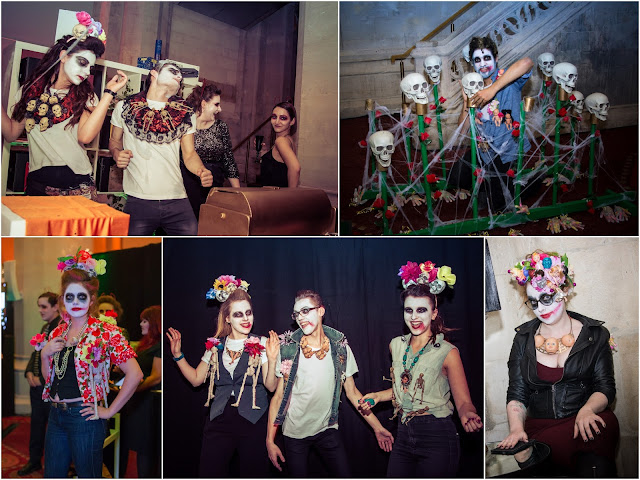 I was in charge of designing 21 rockabilly dias de los muertos,   costumes for the graveyard gang. Fortunately I had a great team to help made of Florent Bidois, Alice Tiger,  Lottie Yearby, Lucy Abrahams, Annie He.   It was my first experience being at the head of so many people and I had the feeling I could start my own fashion school! 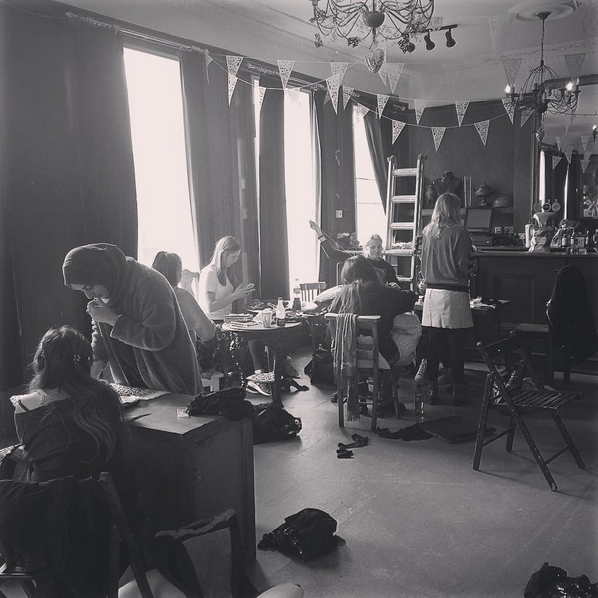 For our piece, with Simon from Luxurioux snacks, we were the evil twins inviting the guest at a creepy "Day of the dead party" with babies fishing game.

Literature & cinema is full of creepy twins, symbol of duality, of the freaks, combining with the clown, they  should refer to an happy moment of childhood but paradox ally enough they are  very creepy. 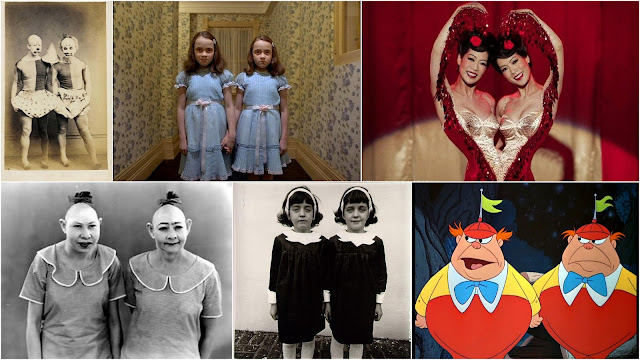 With Simon, we  already exploited the image of the twins with "Les enfants terribles" , playing on the androgynous aspect, as we can look similar with make up (having similar hair colour, morphology, same height if I am wearing heels, blurring the gender barrier. 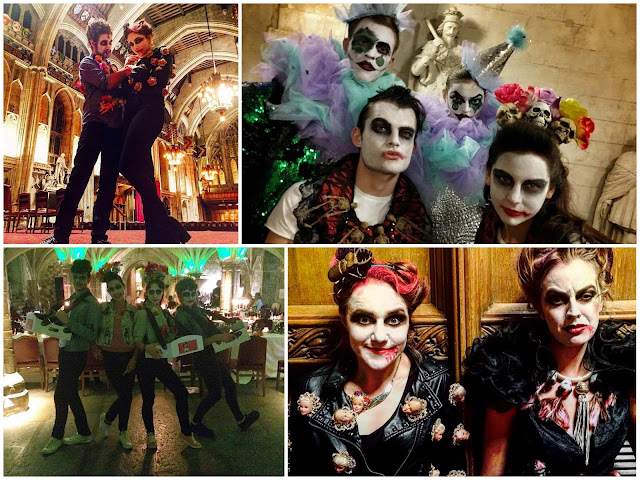 -Playing on the similarities but also duality and complementarity of the twins. The two costumes work as a mirror rather than a carbon copy.

Playing with the two colours (using sequins fabrics so will be shiny and reminder of a drag queen reference &  melancholic creatures of the night ) as complementary characters. The androgynous costumes were  filled with a lot of foam concealing any masculine /feminine shapes. The foam in the one shoulder pad make the costume work together as one and only outfit. 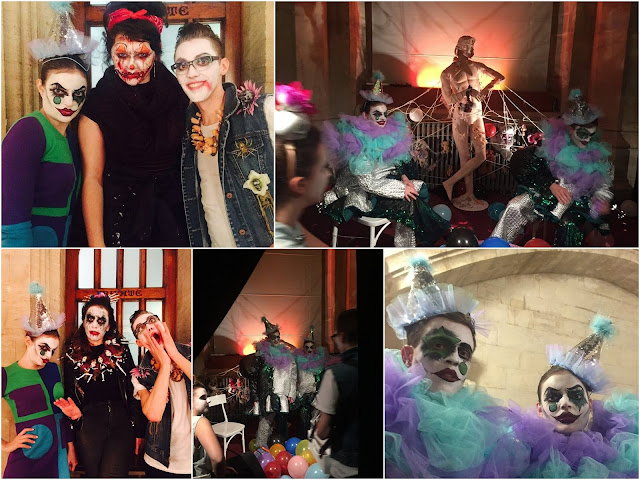 For the shoot we  needed a very spooky location so we decided to go to Dungeness. Classified as a desert this  wind-swept beach is scattered with random wreck that seem to desperately  wait for the never-coming high tide  and derelict wooden hunt, in this post-apocalyptic atmosphere a rusted  railways who seem to be the one of a ghost train leading to nowhere.

During the preparation a big heavy shower burst so we had no choice to get ready in the car covering the front sit wit glitter and blowing balloon with helium turning the car into a big colourful ball pit.  When someone had to leave the car, with the  power of the wind, half of the balloon escape in the storm.


But we were not the only one appealed by this desolated location. Anthony actually wanted to shoot there out of irony as so many photographer are shooting becoming a obliged passage of all indie independent film of arty music video. Coming back to the car, we were welcomed by a coast line guard who the main job isn't to preserve the fauna flora but to secure the hundreds of shoot happening in the "private land" each year. He claimed himself being an expert at spotting nude shoot with women wearing big fur coat and taking clothes of in one the abandoned  hunt.  Nicki Minaj herself came to  Dungeness to shoot the music video "Freedoom".  She had 8 inches heels so couldn't walk on the cobbled beach so 4 body guards had to carry her simply lifting up in the air to the final location. 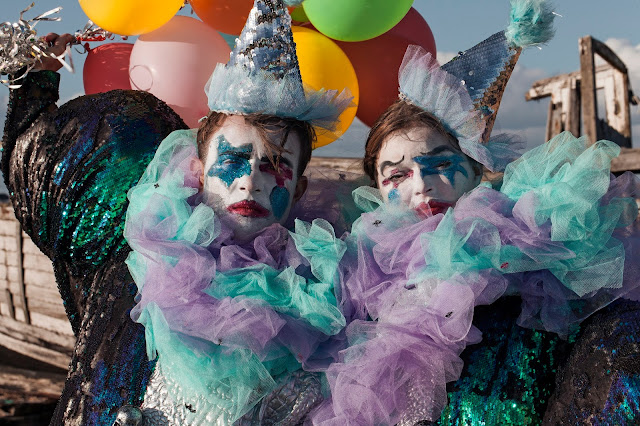 In twenty years he said it had it all but not 2 clowns with face covered in glitter so he took a picture of us  and post it on his Twitter.  Kent online pick up on it and wrote a story entitled "Illegual Clown kick off Dungeness which is quite surrealistic and maybe the best achievement so far in my life!

At the Barbican Halloween Ball, Future Us used moshi monster fingers puppets as currency that the guest could use to access performative experiences. After the show, they generously gave them to me and I could make the 200 moshi monsters dress stitching them one by one on a sliver retro-futuristic base. It took me several days to stitch all but I did the majority during my waiting around time at my extra job.

The dress look like a massive moshi monsters rave party, the bouncing arms create a great movement and a narrative within the dress. 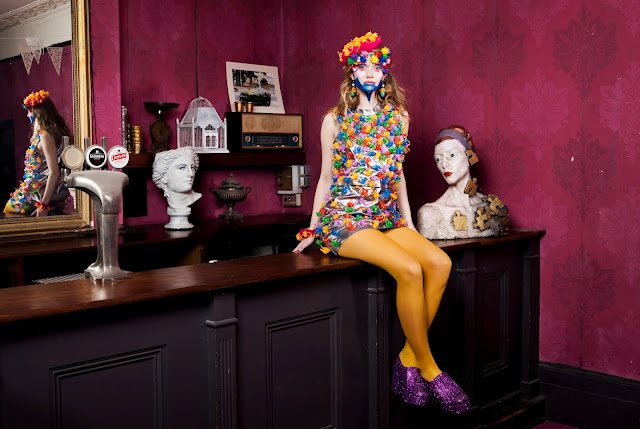 Creating a pattern with the alternation of colours (the secret when you work with colours is to get them as apart as possible from each other). It creates a 3D dress with the finger puppet  seem to emerge from the fabric.

The first reaction of people is always to touch the dress  (I should write on an other post  theorising how a costume soften social barrier and how people suddenly feel very tactile and have no shame touching you in your breast area when you are wearing a costume).  by sayings "I remember theses". Like lego or dolls, puppets fingers convey nostalgia and childhood remembrance. No one know where they came from but somehow everybody had them at home.

I wanted to organise a shoot with the dress and my dream and natural location was the Pink rehearsal room at the Rosemary Branch theatre, where we have been working so intensively on the Barbican Halloween Ball for a month.  A place propitious to creativity, surrealistic with its random props and status,  out of time & baroque  with its battered vintage wallpaper.

The creative director of the Rosemary Branch  very generously lend us the space. With the dream location I had the dream team, the amazing photographer Anthony Lycett,  my beautiful flatmate Alex modelled for me.