After only few days in London, having spent Christmas time in France, I took the Eurostar back to Paris to help Anthony Lycett to prepare his exhibition and perform on the opening night 9th of january.

"The working Lycett, photographer living in London, explores and portrays the "sub culture "London and Paris. His analytical approach documents the forms of self-representation that elevate the style to cult status. The exhibition offers a look at his most recent work, which follows a working almost ten years of capture portraits of individuals from social currents of the present time. The series "Self-Styled" started in 2008, today includes more than 200 diptychs representing eccentrics, dandies, punks, Gothic, transvestites and the forefront of London and Paris."

We didn't know what to expect. We were inhabited by a mix of excitement and fear.  Are people going to come?  Are Parisian ready for this?

At the end, the event was a very successful night animated by a very colourful and eclectic crown.  You could believe you were in London, as if all the eccentric of Paris came out from their hidden dark cave. The styled people of the audience acted as a reflexion of the portrait hanged on the wall giving a third dimension to the prints  as if theses extravagant characters came to life escaped from their frame!

I could hear people saying "At last, an event when you can dress up in Paris without being judged"
I had the best reactions I never had from doing my Lego performance (maybe because I used my biggest and more beautiful one which obviously make a statement).

I was very  lucky my Mum made it (legally) crossing the channel about a year ago, transporting it from London to Paris as I couldn't keep this 3m diameter structure in my tiny flat! (Read the article about the Lego dress originally made for London 2013 fashion week) 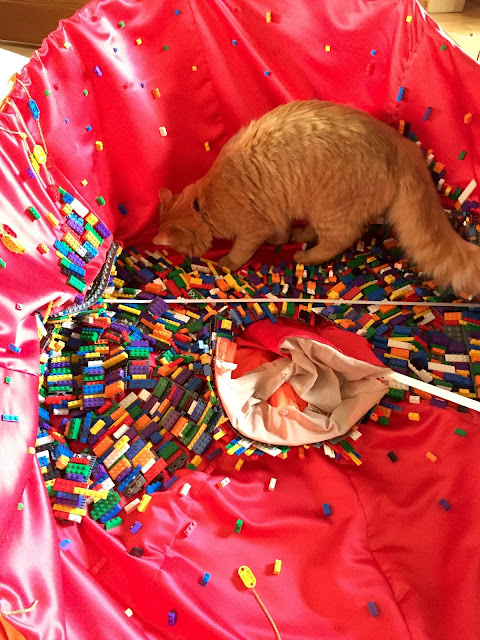 While doing some little alterations for the performance, my cat started playing  with it and I hoped the audience will enjoy it as much as him!

Me, myself and I, or 3 version of me. It is such a weird feeling to see your pictures framed in an art gallery and thinking someone could buy it and put it in his living room! But I actually have the uncanny feeling of the strangely familiar, of a girl looking like me as this pictures have been taken two and one years ago. 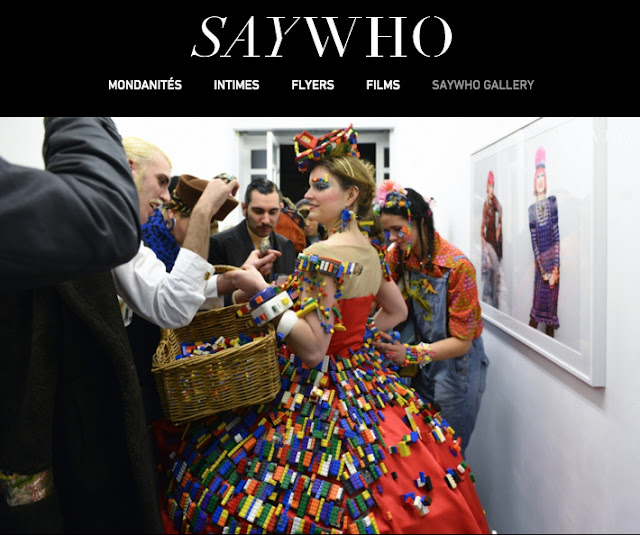 As a teenager, I was drooling over Saywho pictures of glittery fashion people at hype parties... TODAY I AM IN IT!!!
find all the picture of the opening here 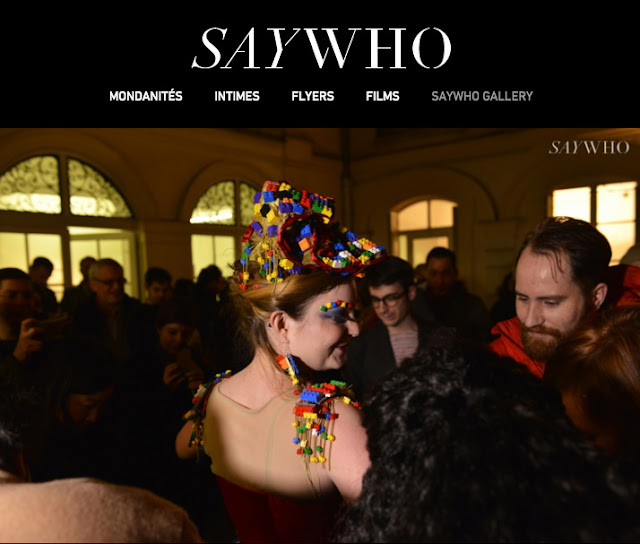 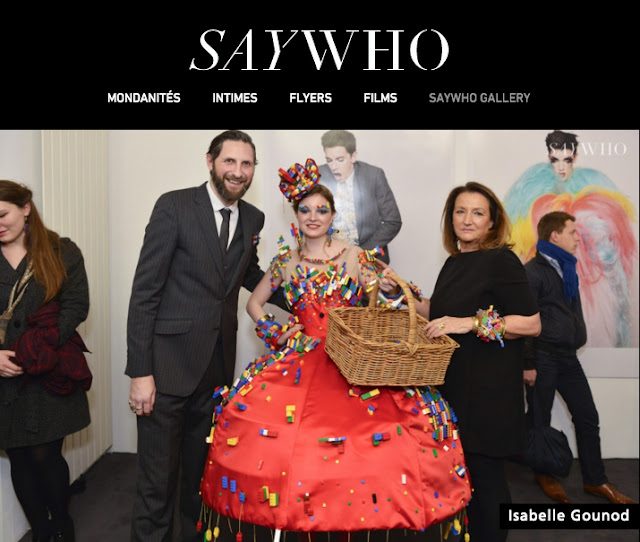 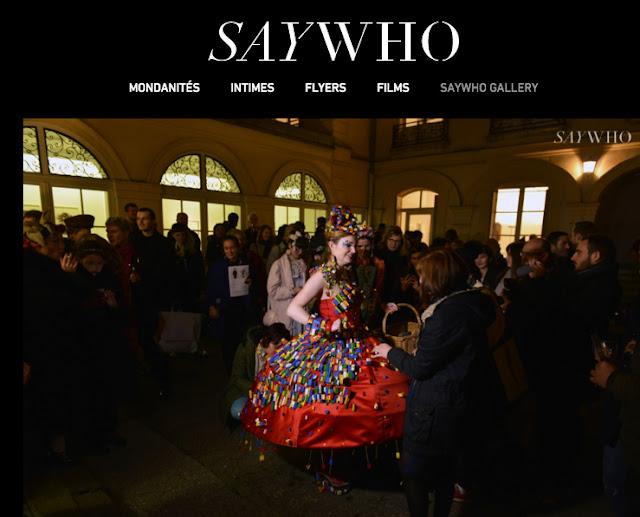 Someone told me "that is the dress Donkey skin should have asked to her father in the fairy tales instead of the Sun dress or the cloudy dress. Then the king wouldn't  have been able to provide it and she wouldn't  have to ask of the skin of the donkey! 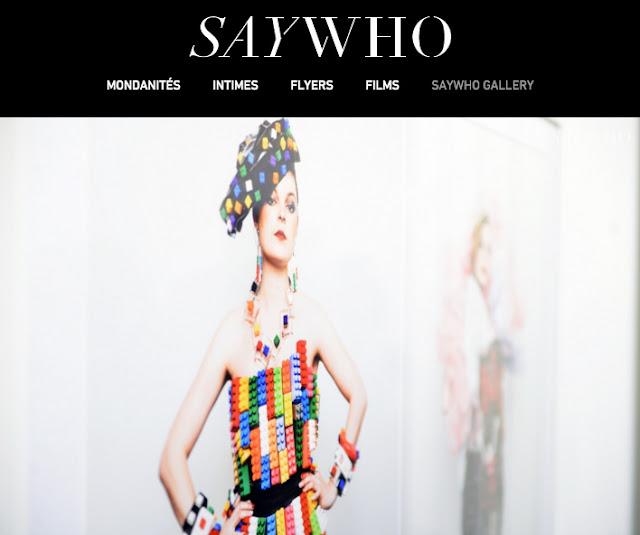 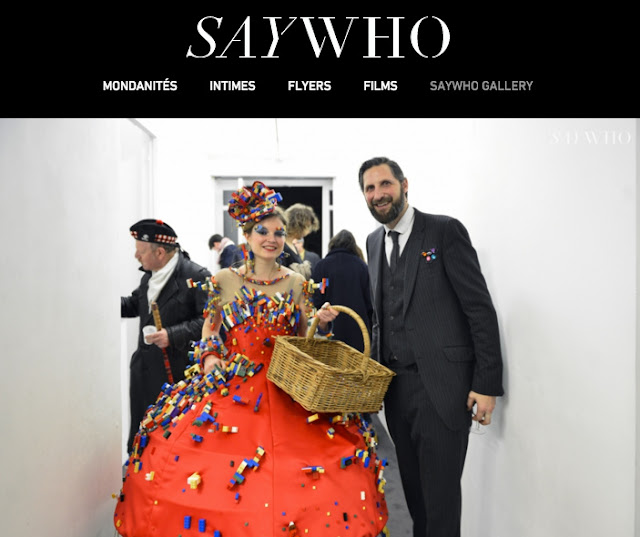 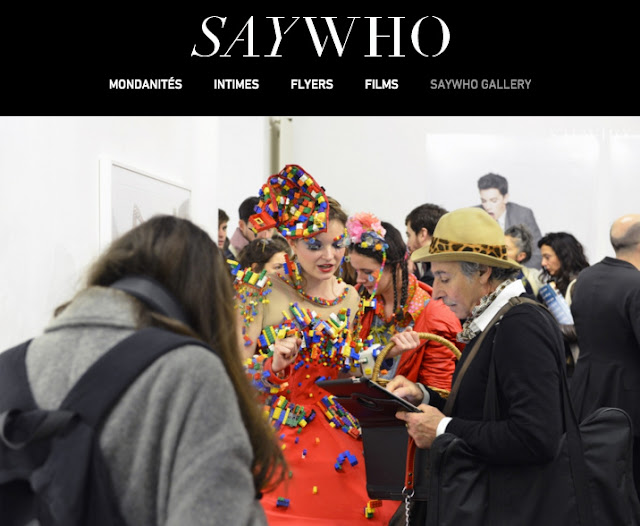 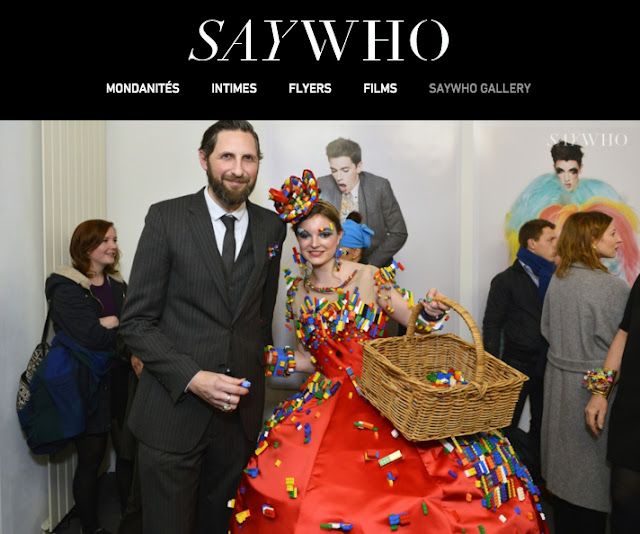 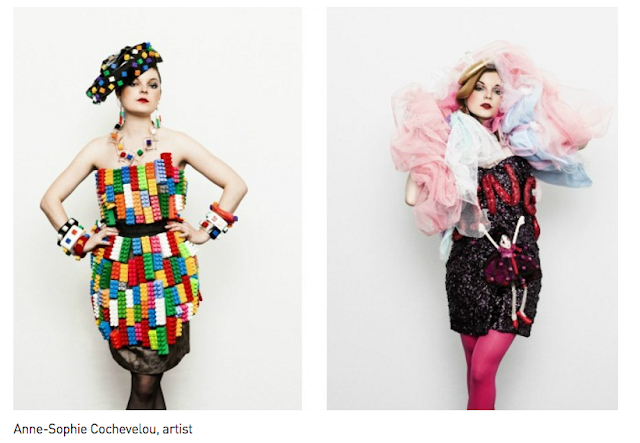 I don't really like to see me on TV (especially hearing my voice) but this video conveys the great atmosphere of the opening and document well the performance, thanks to Kingz magazine.

And all the press is well deserved, for me, Anthony's work is more than simple portraits, it is the  sign of a  social phenomenon.  2016 will be placed on the sign of individuality and creativity, as show the launch of "all body type Barbies". There is a start of revolution in media where people can't accept to see one type of  formatted beauty, and has Baudelaire said "Beautiful is always bizarre".

Taking the advantage of being in Paris I had the opportunity to shoot some of my creations in a different background than London, showing that you don't have to fade in grey in the Parisian greyness.

This is my new multicultural necklace subverting cultural appropriation by mixing Indians beads, African dolls & Peruvians figurines I made for the amazing Sue Kreitzman.

I made this big cuffs bracelets for the gallerist Isabelle Gounod for her to wear at the opening.  She is not an adept of maximalisitc style but with a black dress, the bracelets just looked stunning!

She said "I feel I have a fairy tales at each wrists".  Indeed I like to create jewels with a narrative.  I sourced all the miniature toys in charity shop and car boots sales and stitched them on a fabric base assembling them according to heir shapes  and colours.

Also for a fresh start of the year I made a new website, feel free to have a look (my projects are more classified by theme rather than chronologically on my blog!) 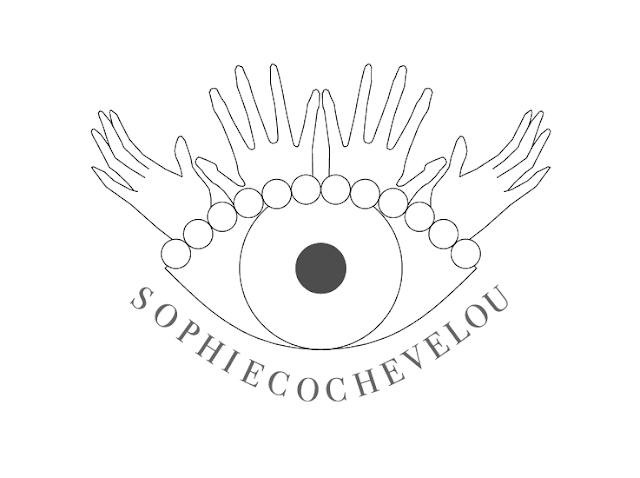 I also had a new logo made by my very talented sister, now I need to figure out how to print my own labels!