I met the amazing performer Rachel  May Snider and she gave me the dream dress project.
-"I know it is going to sounds weird but at the end of my show I am turning into a giant lobster, could you make a lobster dress?"
-Of course I can make a lobster dress! 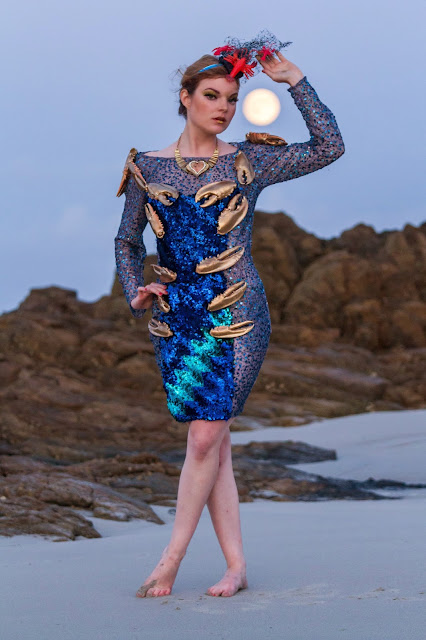 I actually already made a lobster dress, (see the article here) .  I had theses lobster claw  from a meal in Brittany last year  and when my Mum wanted to throw them away I beg her to keep them (as I keep everything); After putting them in the bleach for a very long time I gold sprayed them and turned them into a dress.
I was interested into incorporating some natural organic elements into one of my creations. 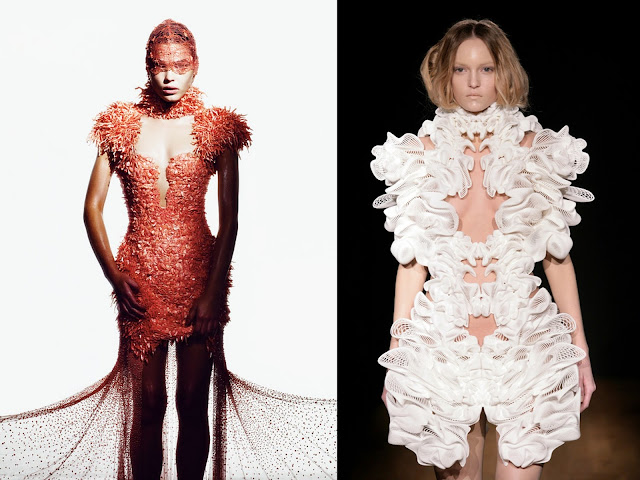 I was inspired by the Alexander Mac Queen  exhibition Savage Beauty  at the V&A and his fascinating alchemy between futurism and primary beauty, like the Victorian Gothic, which combines elements of horror and romance.
Alexander McQueen frequently returned to the theme of primitivism, which drew upon the fantasy of the noble savage living in harmony with the natural world, using raw material
like  horse hair to make skirts, crocodile heads to adorn shoulders, leather to sheathe the body and feathers to catch the light. 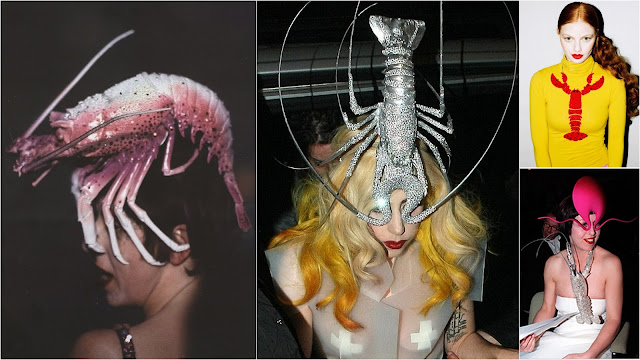 The idea, like with the Fox costume  (see article here) wasn't to create a anthropomorphic costume of a giant animal  but to make a dress that refers to the lobster. my idea has to create a very glamourous base inspired by film Noir genre and 50's hollywood and add the structure of the lobster at the front like Tatty Devine necklace. 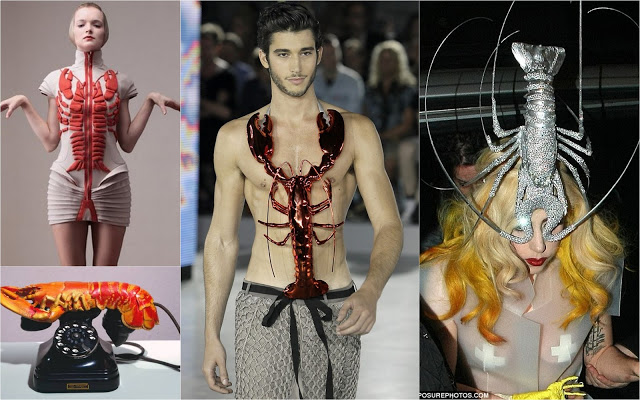 The lobster symbolise women sexuality, like in Dali's lobster telephone. This surrealist object, made from the conjunction of items not normally associated with each other, create something both playful and menacing. Dalí believed that such objects could reveal the secret desires of the unconscious. But also vulnerability as the lobster shed their skin four times in his life, during this  transition time he is like naked and have to hide himself from predators.

The lobster actually wears it skeleton upside down as his shell protect his soft body, so in the dress, the lobster was himself the skeleton,  the legs creating the shape of the rib cage.

"Dressing for Breakfast" As the title say itself, the piece is about the art of dressing, not dressing up but getting dressed for any occasion, even to have your breakfast or go shopping at Tesco.
The character says how clothes are like armours, because people notice you without seeing you so we can feel protected,
I  can relate to Rachel character who is a proper dresser, she can't go out without choosing the perfect outfit from head to toes. Paradoxically enough, standing out by dressing flamboyant allow you to hide behind your clothes. You don't create another persona but you control the image you give to the others.  You give so much to them to read by bombarding them with vibrant colours that you can hide your true self behind your armours.
In her show, Rachel came out with this surrealist and  brilliant idea that it will be simpler to have a life size cardboard doll, changing very easily with a cardboard for every occasion, like the vintage diving suit when you walk in the street and you meet someone you don't want to talk too.

"A daughter discovers a shoe box filled with her mother's treasured cardboard doll and her array of historical cut out costumes...

In Dressing for Breakfast, Joan of Arc,  A Deep Sea Explorer, and Marie Antoinette are brought to life by performer Rachel Snider and costume designer Petra Storrs in an autobiographical piece exploring historical fantasies, the dance of lobsters and contemporary dressing rituals." 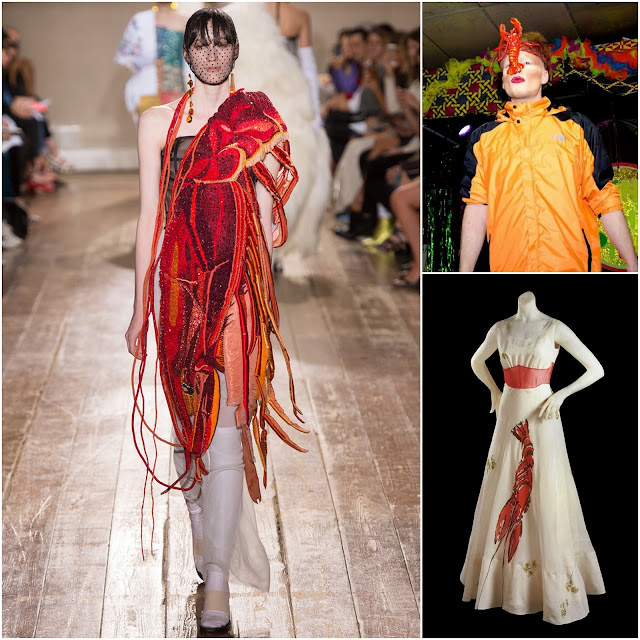 For the actual dress I didn't use any real lobster (didn't want the fishy smell during the show!).  The lobster structure is made out of foam.  Imagine the face of the sale man at the rubber & foam store  when I said to him I am going to use it for a lobster dress! 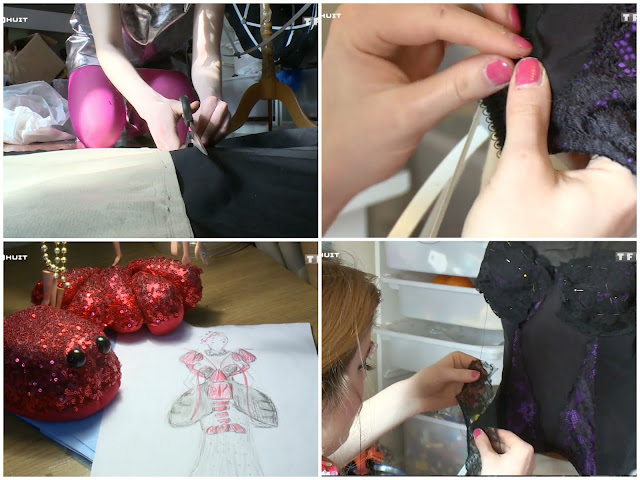 I carved the shape of each part of the lobster body  into the foam.
I covered the foam with red sequins fabric (using the same technique than for my heart dress) to give it a cabaret, showy and glamour look standing out from the black of the dress (this is not a colour palette I am usually using!) 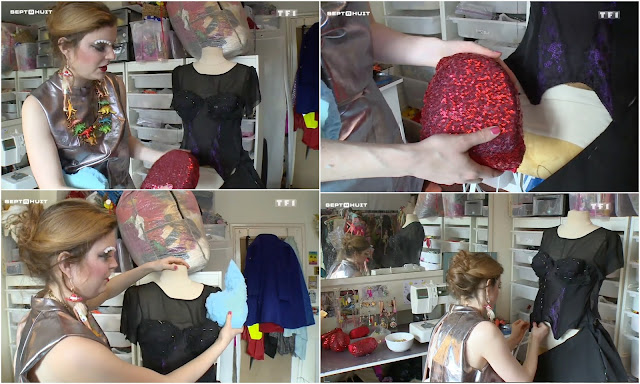 The dress took me two months to make, I started with the bustier, then I made the crinoline, they are like a big shell at the side covered by hand stitched pearls, crystals and white sequins like splinters of shell between Chanel and Pearly Queen inspirations.  Just one side of embroidery for the pearls and shell took an entire week!