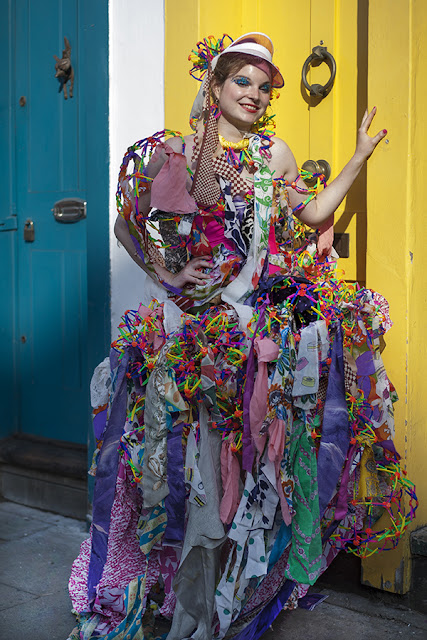 Meihui Lui  is another of Sue Kreitzman's tribe she is the designer of  the Victim fashion street Ethical label, and the creative soul of East London.

She has a shop on Columbia Road famous for its beautiful Sunday Flower market and its colourful doors.  I was very honoured when she offered me the window for 10 days in the frame of a Secret Rendez-vous Pop up Tea". 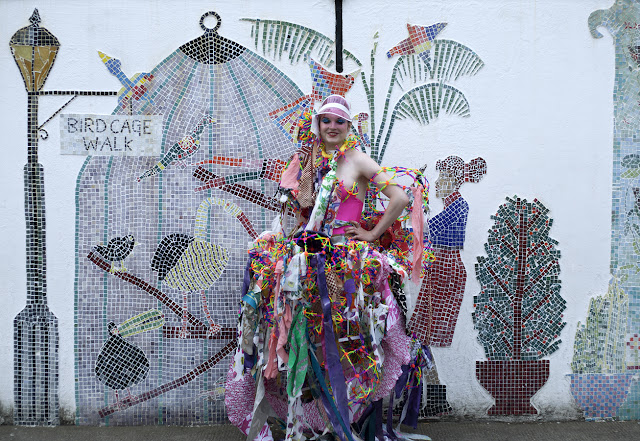 We organised a tea party with organic scones,  and a costume base installation performance. 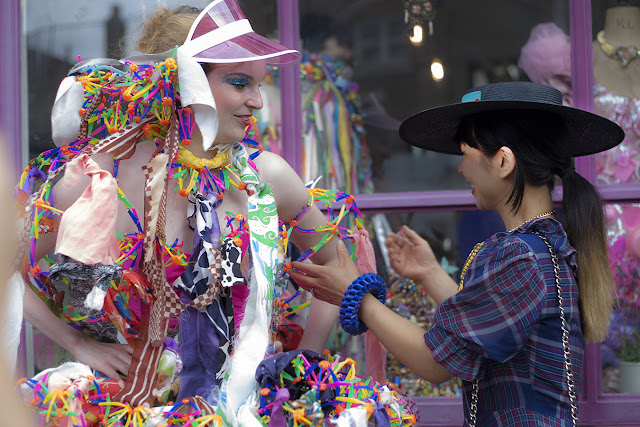 I find this flexible telescopic magic balls toys that we all know from out childhood in Bricklane Sunday Market and bought 30 of them for £30. The shape and the colour inspired me to create a big crinoline dress.

I find the kinetic movement of getting smaller and bigger a very interesting interactive performant in order to create an evolutive garment.  The children, particularly enjoyed playing with the bubbles created by the movement of the toys. 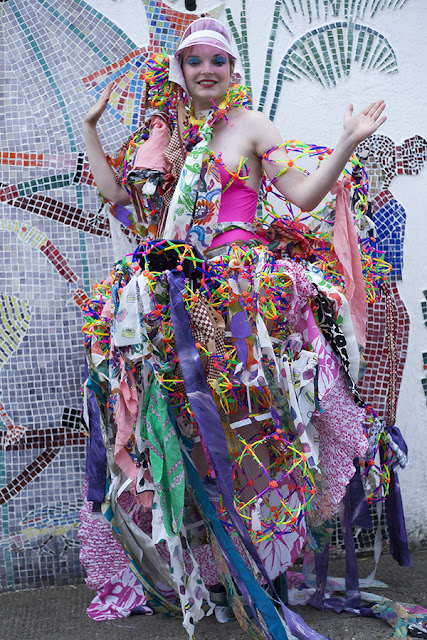 But where I thought the more interesting part of the performance would be the movement it was actually the transformation from a very graphic and futuristic shape to a more organic structure created by the accumulation of the colourful printed fabric.  It was a very interesting collaboration combining Meihui's obsession for European vintage fabric and her expertise in reconstructing salvaged garments and antique trimmings with my conception of playful design. 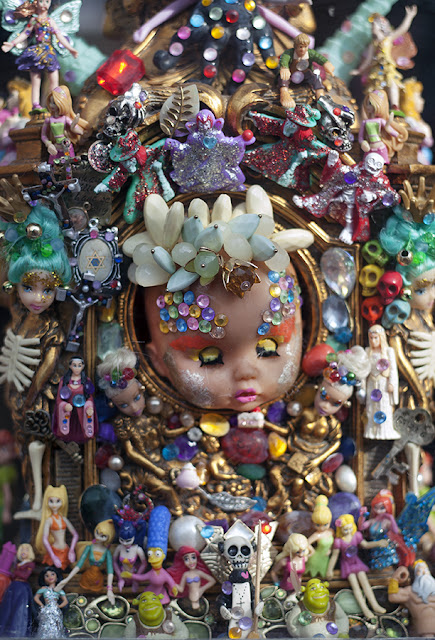 The last judgement:
This is a clock without dial that I found near a bin,
I replaced the missing  clock dial by a baby doll face that I painted and adorned with hand-stitched beads.
On this kitsch rococo style clock, all the heads of golden figurines have been chopped so I replaced them by mermaids and fairies one. 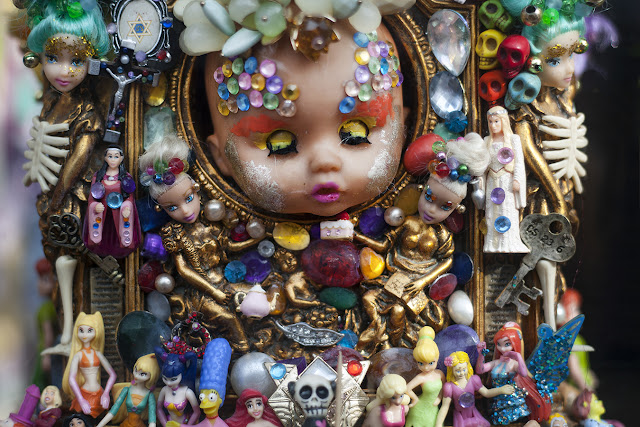 In heaven, time has stopped on tea time and  Ursuala/shiva is the goddess of ice-cream.
The Death is welcoming the dead with her two Shrek bodyguards among the pantheon of Disney celebrities  covered in glitters dancing on the "Dance Macabre" of Camille Saint Saëns for a psychedelic Sabbath. 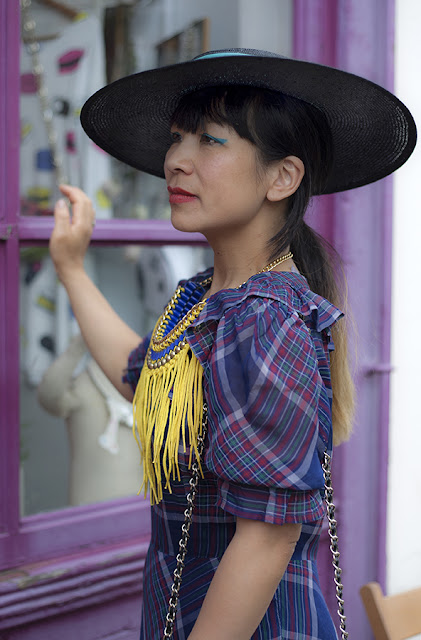 Originally, I made this dress for a bigger scale photographic project with Anthony Lycett. The idea was to create a 80's summery sporty-colour bloc-neon- fluo-graphic look in a Californian aesthetic but transplanted to the English landscape.
We chose Chesil beach in Dorset  for its History  -used as an experimental nuclear bombing range by the RAF before and during World War II- (because the dress has this nuclear structure)  and it is not sand beach but typical British cobbled beach.

Because it is hard to find a scorching sunny day in the UK like in the US west coast,  we had to jump in the car at the first occasion.

The week after, it was Sue  Kreitzman's turn to create a window. She  presented her joyous wardrobe, both garments and jewellery at Meihui’s popup shop on Columbia Road. 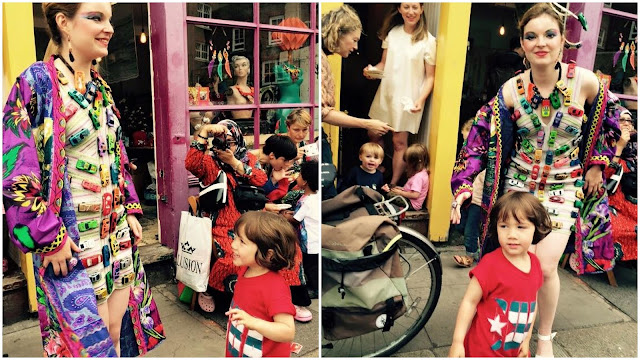 Sue talked about being an artist, a collector, and an art fashionista. She lives surrounded by art, her own and that created by beloved friends. When she leaves her home, she can’t bear to leave art behind, so she wraps herself in it. Each morning she does not get dressed; she curates herself, and emerges into the world as a walking collage, a perambulating gallery of glorious colour and spectacle. A flamboyant character, in age somewhere between her mid seventies and eternity, she spreads her message of colour and art wherever she goes. 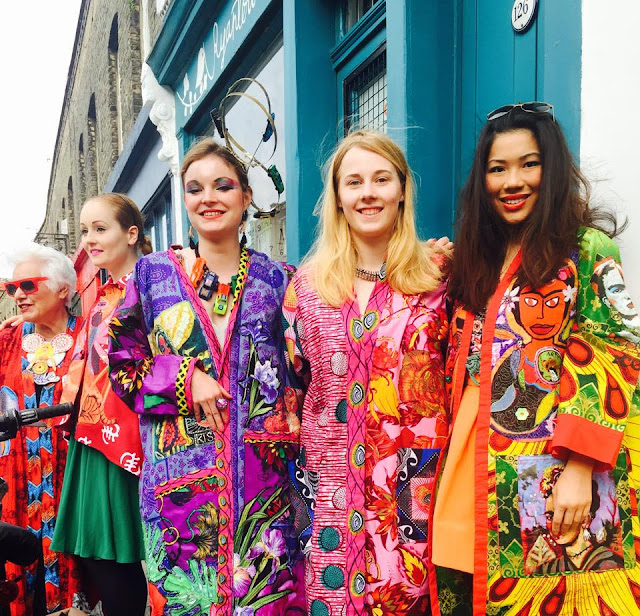 Sue asks that you remember two things:
Life is art, and art is life.
Don’t wear beige, it might kill you! 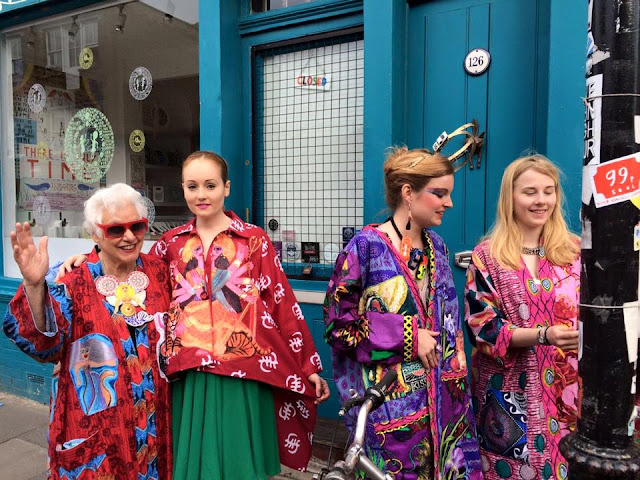 We also improvised a street cat walk with Diane's Goldie gorgeous colourful Kimonos she made especially for Sue.  No limits of age of size…no fashion rules! 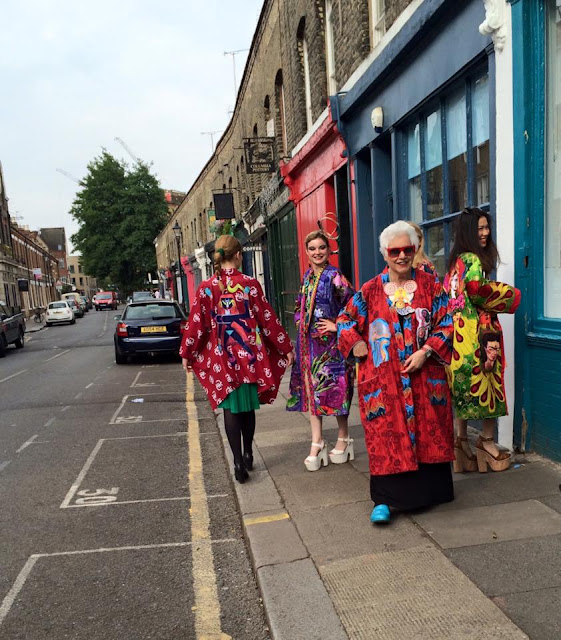 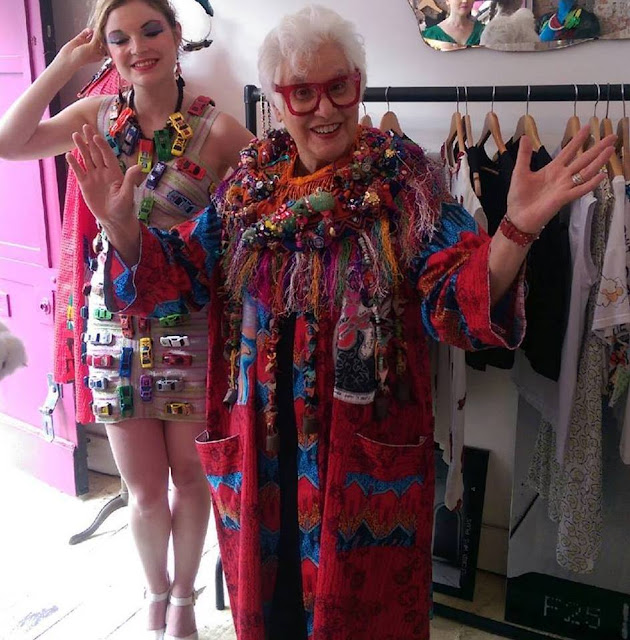 At her Secret Rendez vous, I showed Sue Kreitzman the new bespoke necklace I made for her, a tribal ethnic Indian necklace.

I find this Indian birds made with straw covered with fabric at Bricklane Sunday market .   I made this plastron collar with tinsels and adorned the birds with hand-stitched beads.
I was wearing a little car dress that I called "traffic jam" inspired by my experience of traffic in London
I started using little car early in my work (see one of the first article on my blog) but only making necklace, then a parking jumper. Having these all bunch of little car frenetically sourced in charity shop for several years, I decided to do something with them. I have period, like Picasso have the blue period, I have the lego period, the car period, the barbie period, then I get sick of it and I come back to it few years latter. 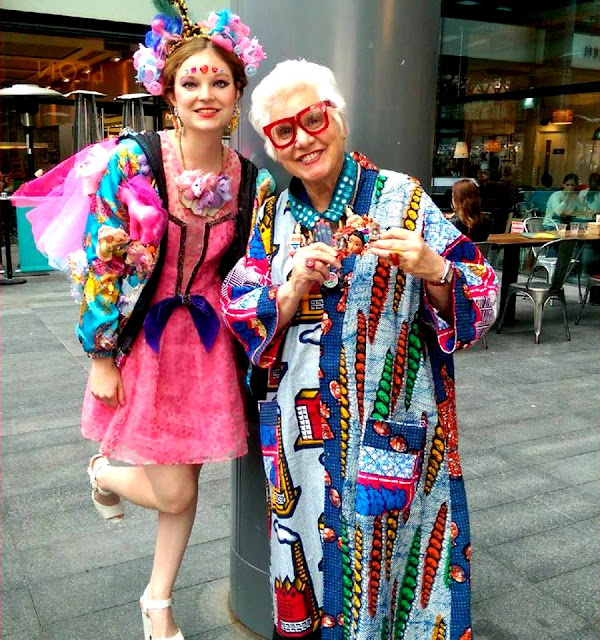 Just before leaving from Brittany, I met Sue Kreitzman at Spitafields market as she wanted to give us some updates about the book she is writing, all exiting news! I gave her a Frida Kahlo brooch as a good bye present before she left for New York.