Colours outside the lines 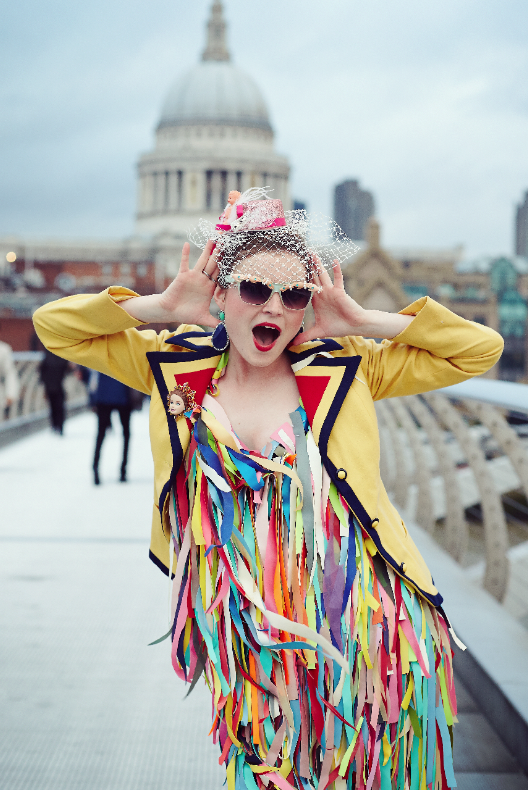 The story start a morning of june 2014. I received a phone call from a production company asking me if I want to take part in a TV advert.  I've been recommended by my good Fairy Sue Kreitzman that they have already been casting and they  asked her "do you know any other colourful people?" "-Oh yes, I think I do".
They came to my house to film me in my environment. You feel really exited when you hang up the telephone and your second thought is immediately "Shit, I will have to tidy".
They said I was shortlisted with 15 people (among them some coloured sheep - for my personal ego I didn't want to lose against the sheep)

At the beginning they wanted to use my colourful lego dresses but they realised they couldn't use a copyrighted product. But they spot this colourful rubber dress that I had just made at the time with a lovely movement on camera. 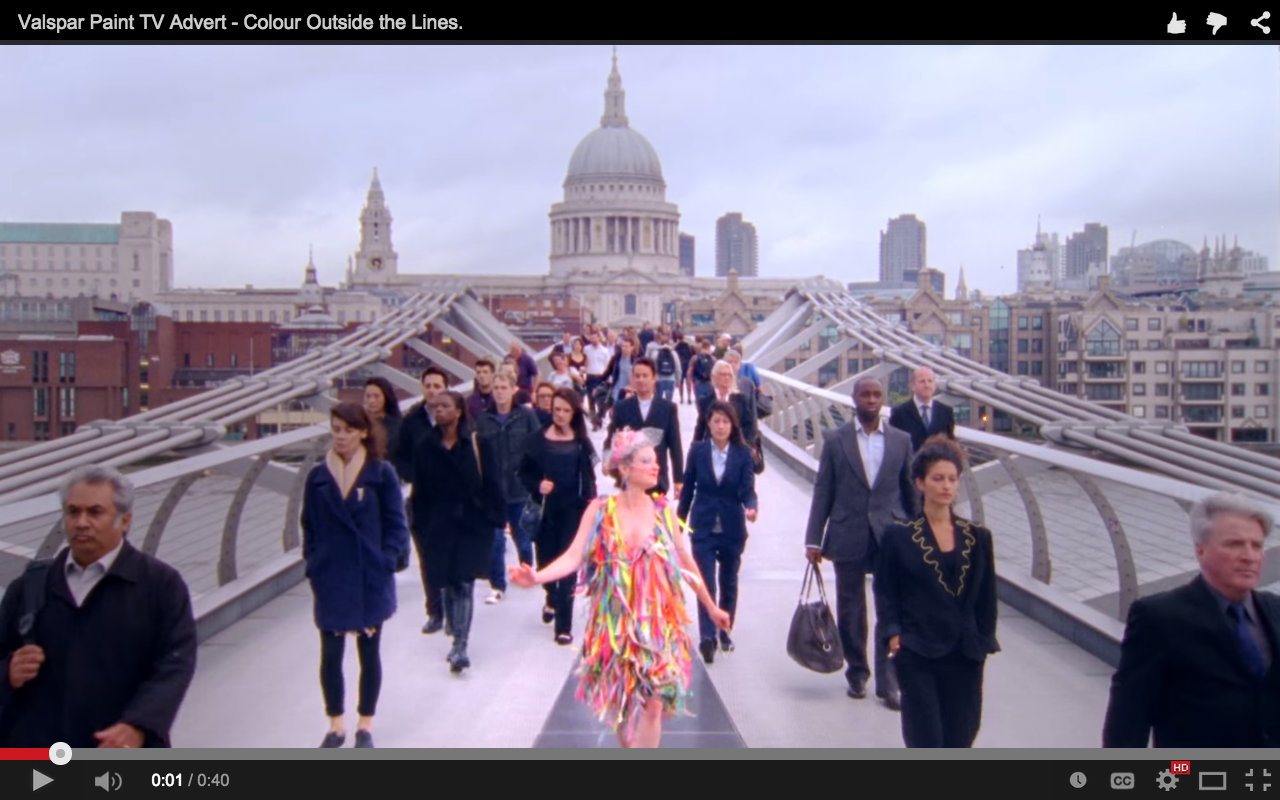 The clever think about Vaslpar advert is that they where looking for real people an not actor. They could have put a model in my dress, a taller and prettier girl than me, but they choose to keep the designer of the dress.  So if you Google the people in the advert (like Sue Kreitzman) you realise they are not performing or dressed colourful just for the ad but that they are actually doing in their lives what they do on the screen and their lives revolve around colours. 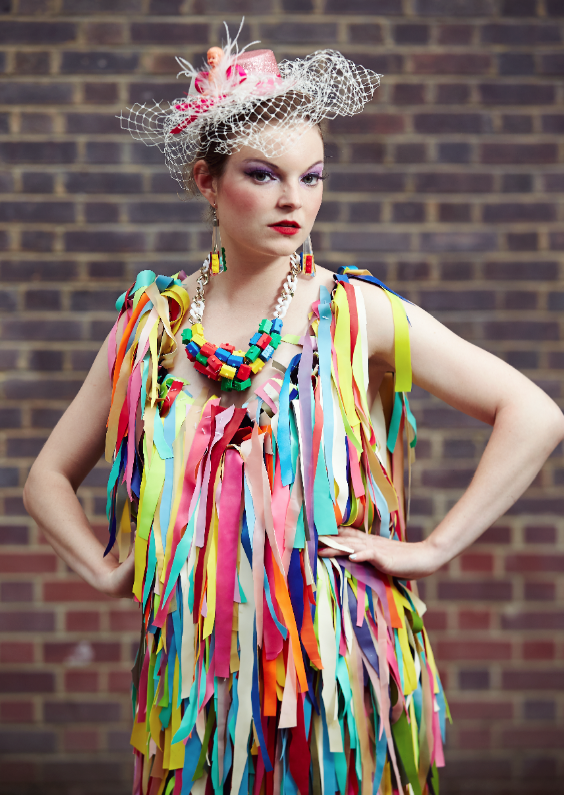 On the day of the shoot, A taxi come to pick me, bringing me on set on South bank river (I felt very VIP). They had privatised the millennium bridge just for the scene.   As a little Frenchie coming to make my way in the UK I feel I fulfil the London dream.  They have been closing the millennium bridge with Saint Paul in the background for me. How more London can you get? 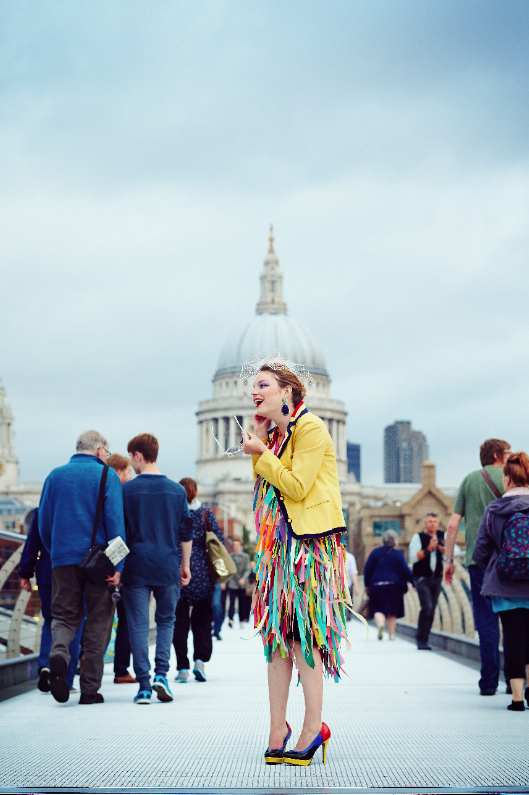 Aside from my free lance work, I do some extra work and normally I am one from the crowd.  I am the one wearing black, I am not the wardrobe brief  said  "don't wear colours don't wears make up, not too much white but not too much black, no print or pattern etc… 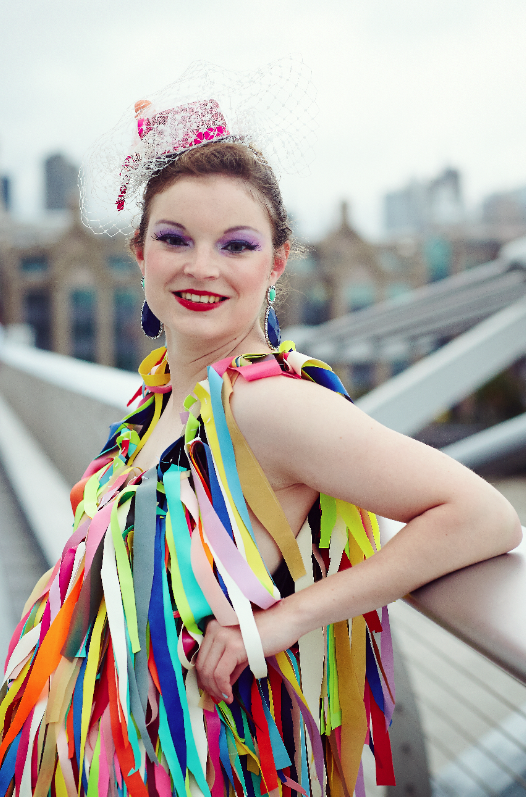 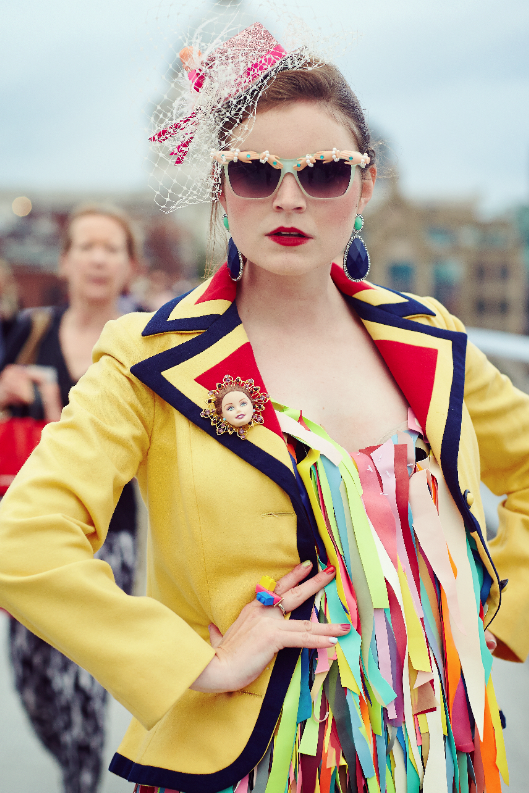 Of course this TV campaign hasn't changed my life but it is nice to say "I've been in an advert" this is on a to do list in a performer life (expect for the purist  hating commercial world.  I've been receiving texts and private message " I've seen you on TV!" or "Is that you I've seen on TV?  It is always a strange and great feeling when you  see your advert on TV and you are "that's me". 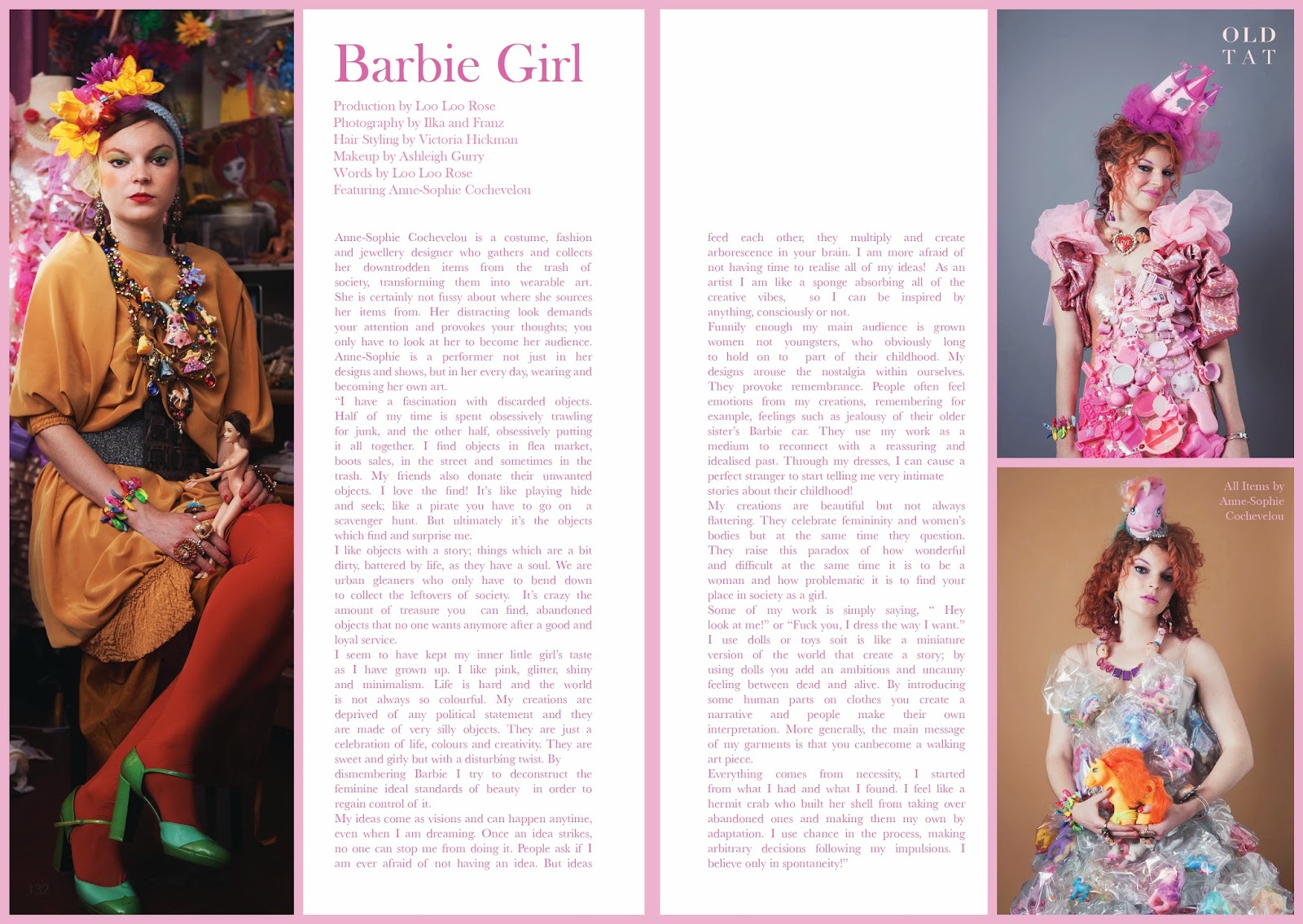 I am really happy of this collaboration with Old Tat magazine which is  not  just another magazine. it is a
British bi-annual print publication featuring fashion, art, documentary, illustration and the miscellaneous.
I've been lending my pieces for few editorials and I was very glad of having my feature in this concentrate of creativity!

The shoot took the all day, the lovely photograph duo Ilka & Franz came to my studio/room to take a portrait in my "natural environment" (even if it looks a bit messy I really tidied for that!)


Then I cycled to their studio and I've been taken in by a make up artist and a hair stylist who died my hair pink and curled them for two good hours!

" Our niche is that the magazine shows off a love for clutter and celebrates the strange and even hideous items of old tat which do more than just collect dust. As a nation, we struggle to throw anything away hence our countless charity shops on every highstreet and our love for car boot sales, flea markets and antiques. We aim to create work featuring more than your usual white backdrop.


Ultimately Old Tat is a timeless print focusing on the upcycled, the hoarded, the treasured and the gems of our can’t-throw-away society. We have a slightly retro aesthetic and adore anything tatty. We are completely unique and set ourselves apart from the clean cut fashion editorials we are so used to seeing. Everyone loves a bit of old tat!" 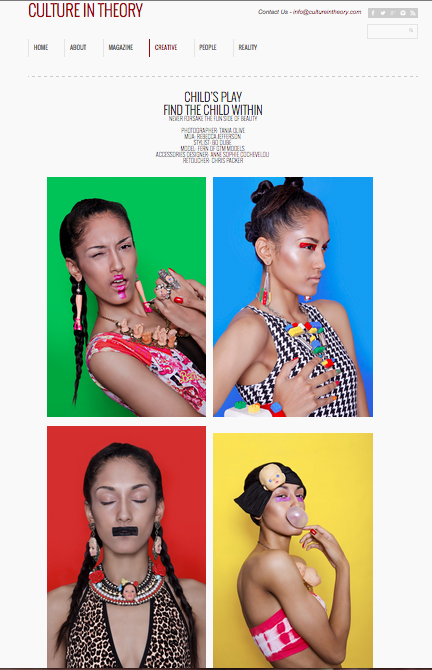 My jewels has also been featured in this editorial for
My jewels featured in a fashion shoot for Culture In Theory magazine http://cultureintheory.com/childs-play such a good news to start the week with a very playful and mischievous shoot! 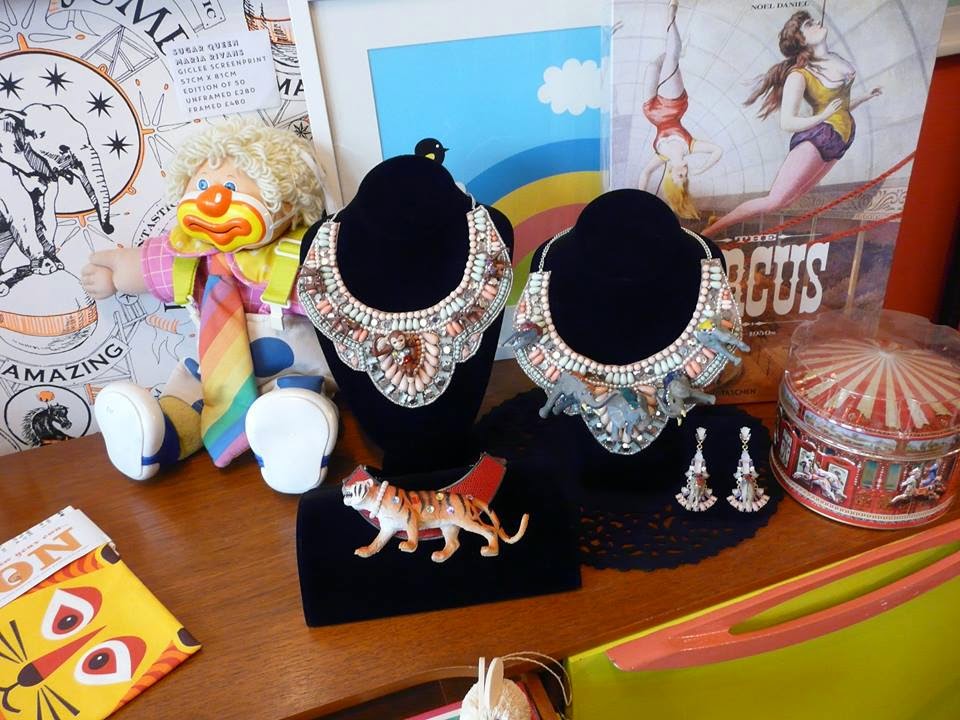 I have designed a special Circus collection for Fee Fee La Fou HQ an amazing shop where everything is Circusy & colourful , a mix between concept store and curiosity cabinet http://feefeelafouenterprises.com/
have a look if you are in Dalston! (FFLF HQ, 6Bradbury Str, Dalston N16 8JN)