No, as people said, this is NOT a christmas dress but a a birthday present dress made of hundred of jewellery boxes stitched on a blue sequin cabaret base, here shoot for the amazing Self Styled project. also follow it on instagram 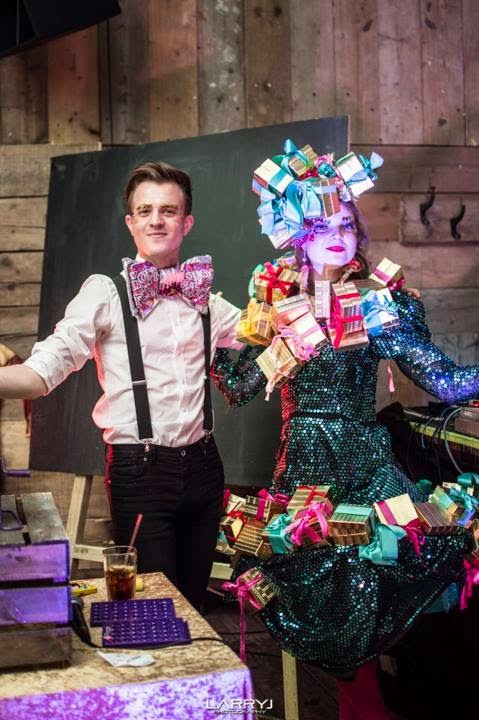 This article celebrate a year of magical artistic collaboration with Bar 90. I met the events manager Olivia Casamatta more than a year ago through my flatmate.  At the time they were looking for a crazy and kitsch girl to host their Bingo. My flatmate was "I know the perfect girl for you".  The first time I cycled to Hackney Wick in the heart of the winter, arriving among theses imposing Warehouses I thought I was lost and that Jack the Ripper would sprung out from the foam and strangle me. But, after a few trip there,  it become a very familiar place with its creative vibe and Bar 90 team became like a big family. More than being an amazing venue with awesome music and cocktails, they always try to promote creative events, inviting artists to perform and exhibit.   So after few Bingo, they asked me to perform few time with a total trust of what I will do and what I will wear! Bar 90 has been an amazing platform me for developing my creativity and experiment with performance..and they are very generous with drinks tokens! 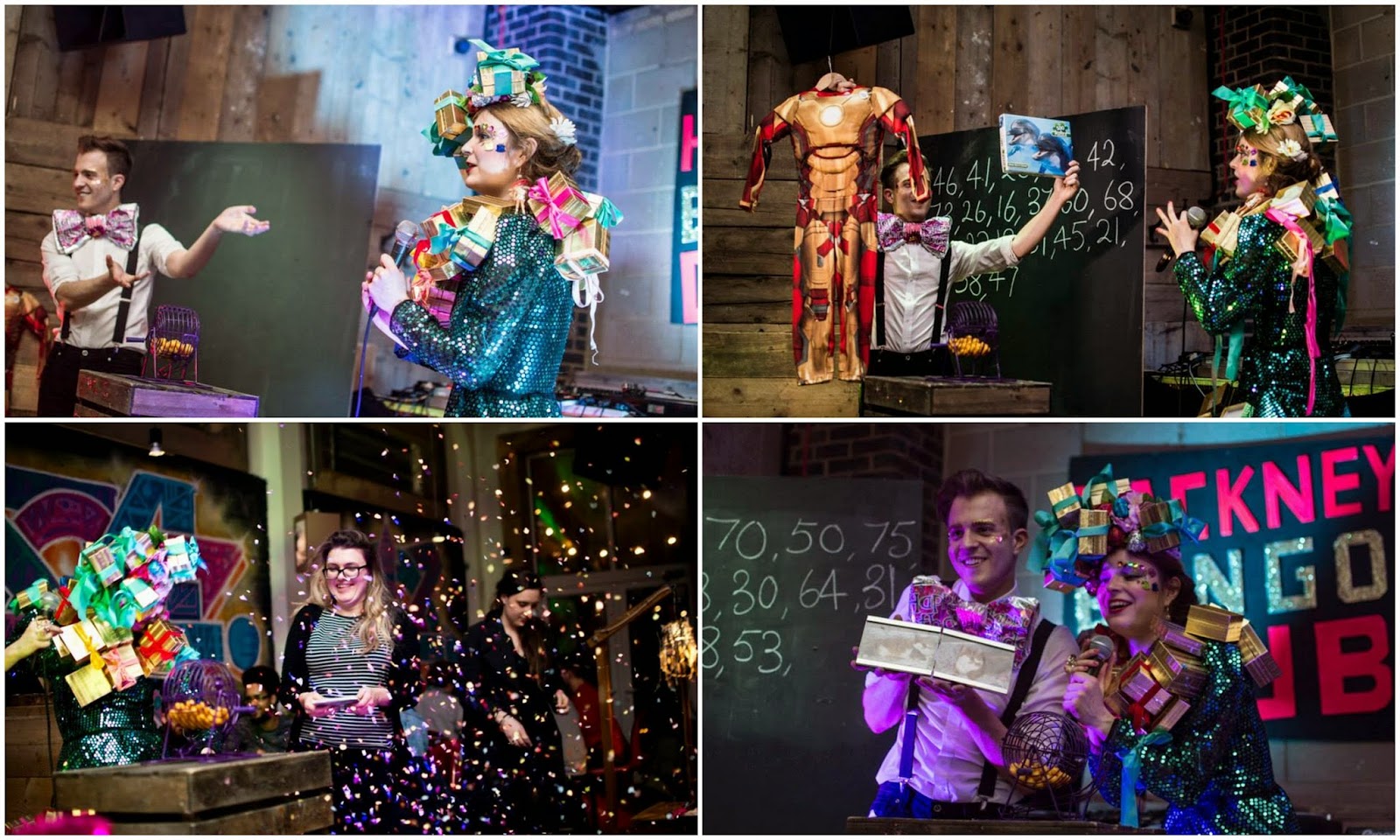 For this special Bingo anniversary edition I decided to make this presents dress. I ordered 100 of jewellery box online and stitched them on by one on the dress, and the head piece. A hoop is supporting the weight of the boxes on the skirt. 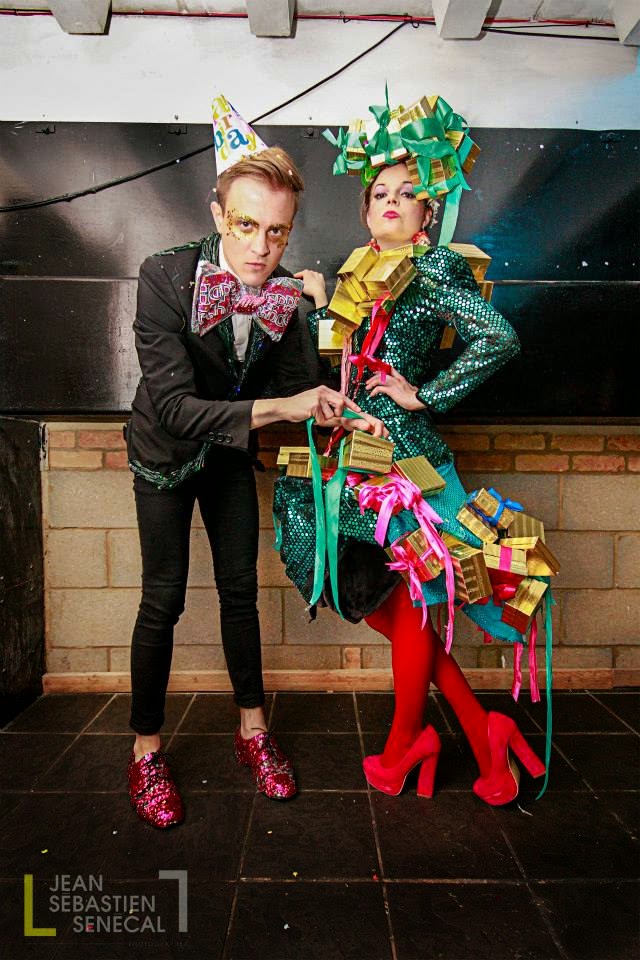 In theory the bingo prizes should have been inside the box and the winner would have to look for his surprise directly on the dress. But the majority of the prizes were to big for the boxes and the despite of my heart stickers reminders to know which box contains what, during the show I couldn't remember what stickers correspond to what and couldn't find the presents inside the box and had to open all of them on stage so didn't really worked!

On the saturday Bar 90 held a massive party for their first anniversary, and I turned the Bingo dress into a costume based performance. With my acolyte Simon Dodi  from LuxuriouxSnacks we  hid sweets and confetti in the boxes and went through the guest asking them to open the boxes and throng confetti at people ( between that and the glitters I am sure Bar 90's cleaning lady hate us!) 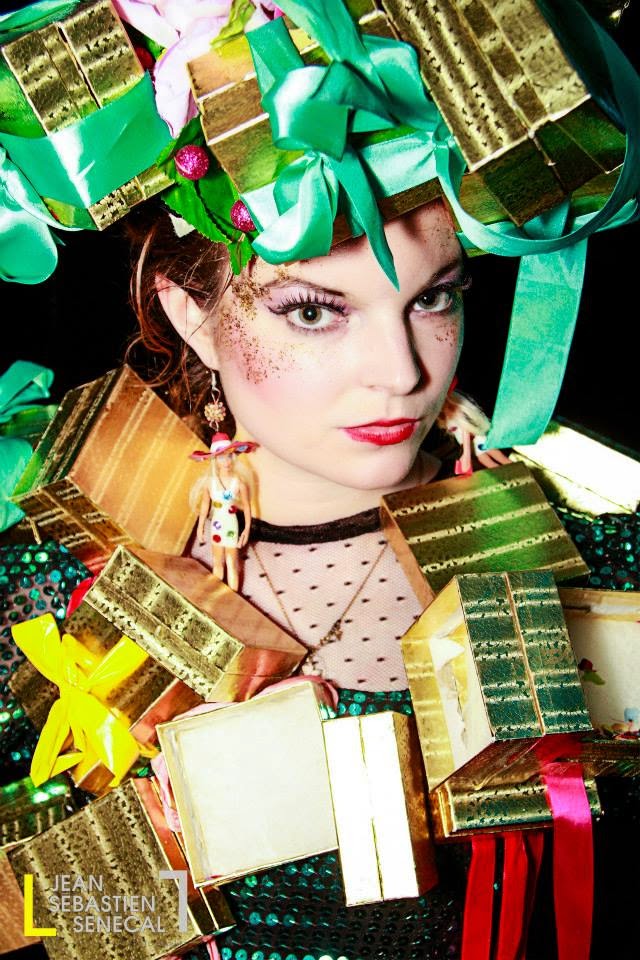 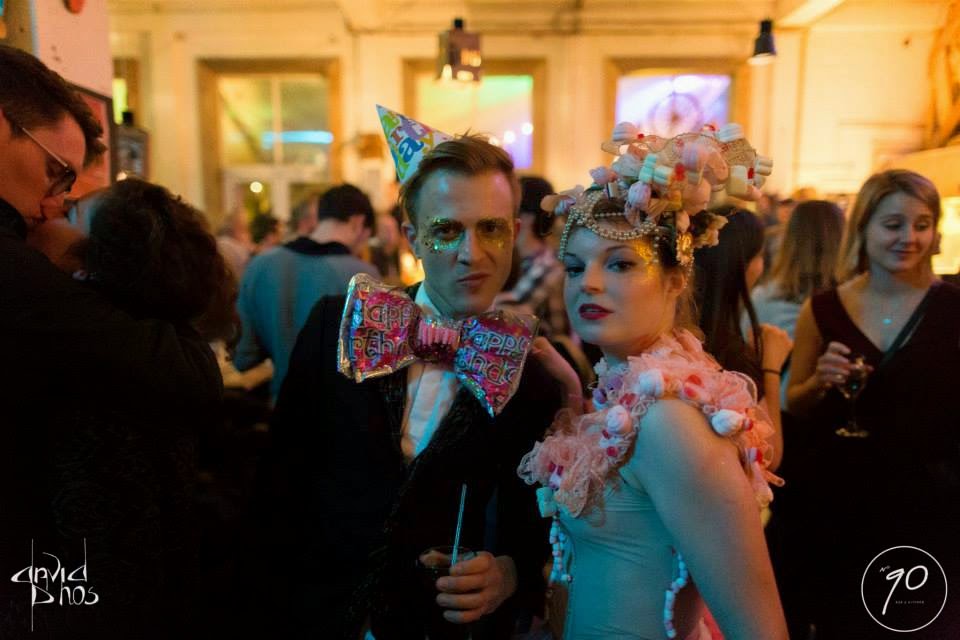 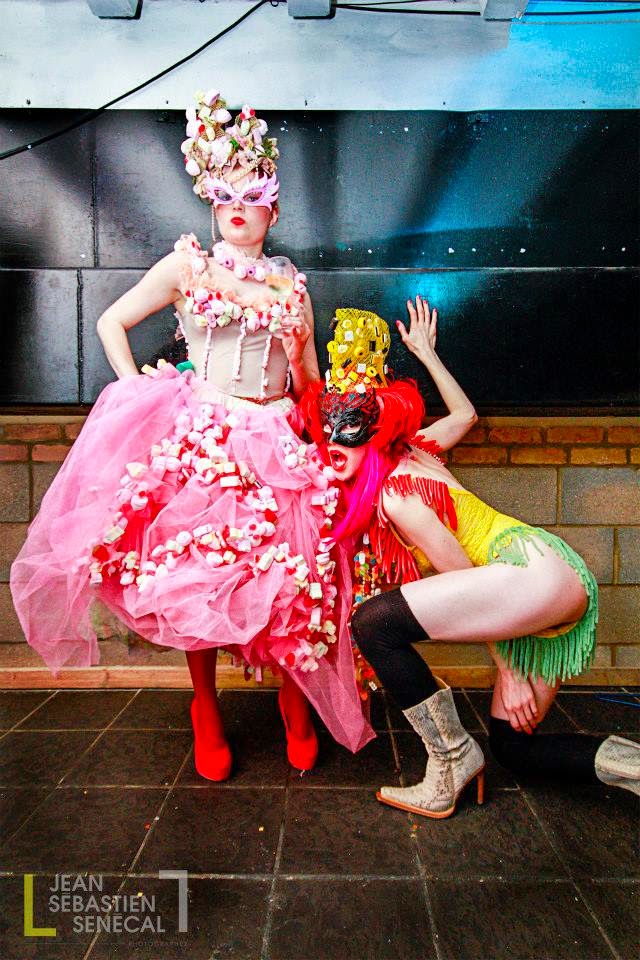 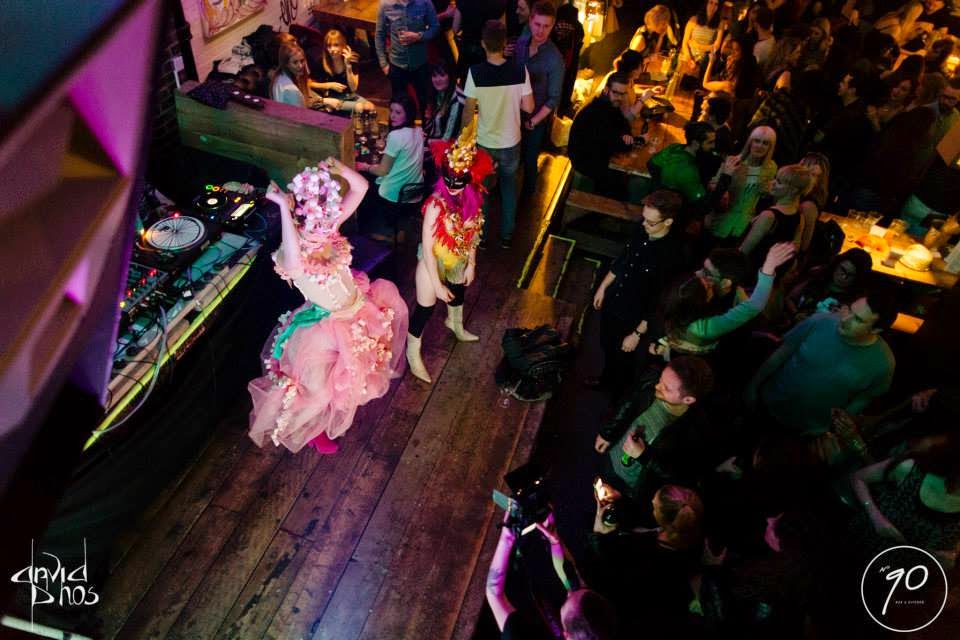 For the performance we danced on the stage on "Candy Shop" by 50 Cent. The idea was to divert  the  misogynist lyrics of the macho hip hop song into an  offbeat version as the we were not dancing in bikini but in surrealist crazy costume showing  a more powerful and mysterious vision of women. 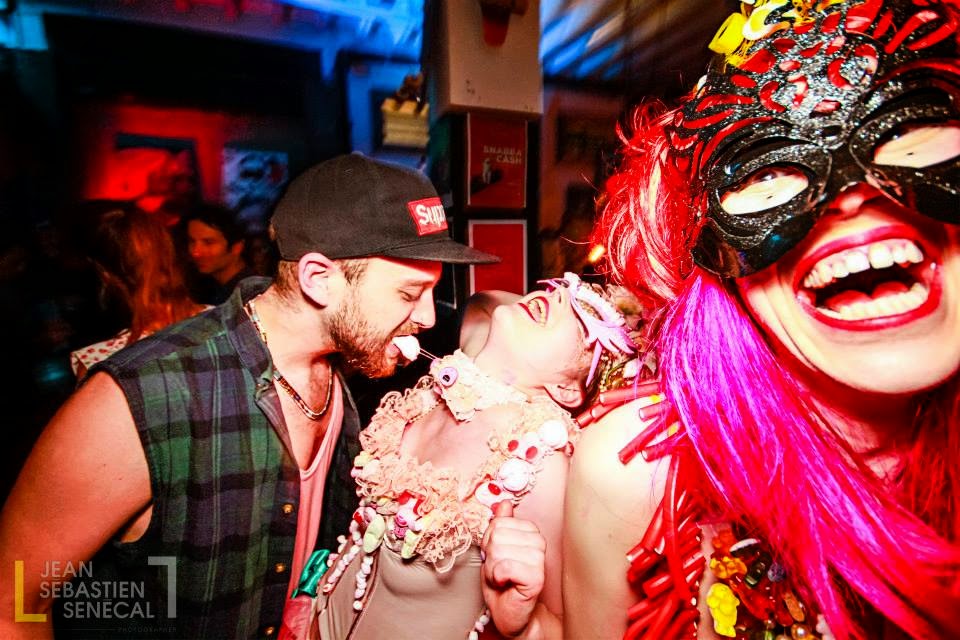 Then we were coming to the audience eating the candy directly on the dress being "eating alive" being like walking buffet. 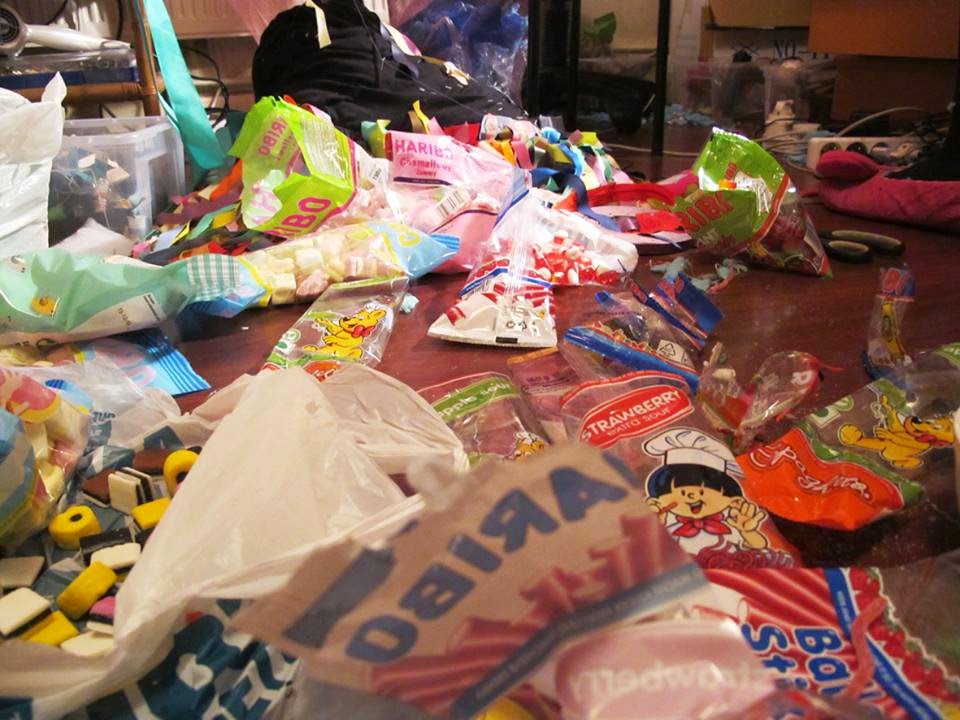 The floor of my studio became covered with candy packaging and sugar as we opened every single packet to visualise the colours range for our composition.  We were eating a lot of candy while stitching them to the dress which created a sweet synesthesia  between the visual aspect of the dress and its taste.  Taste is not often involved in fashion as you usually don't use perishable commodities but is add another dimension to the way you approach your garment. 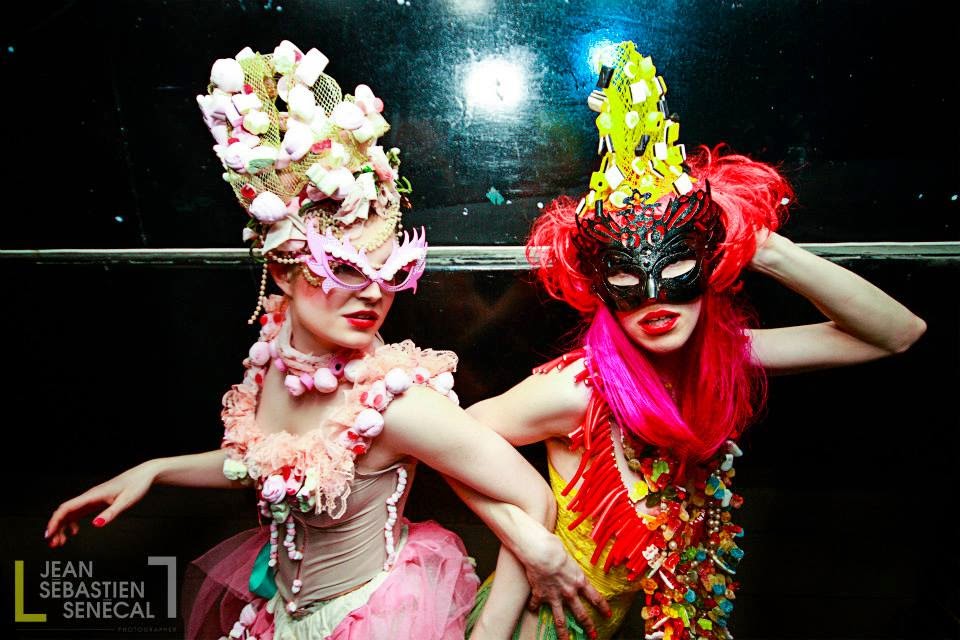 For making the dress, First we met at Poundland to supply ourself in sweets.  We looked like two bulimics doing some compulsive shopping and came back home with 42  packs of sweets. We tried to define our character according to our personalities. I chose to be "Dame Guimauve" a more sweet and who turned into a decadent baroque Marie Antoinette.  For Loulou, we saw something more slightly acid as she is like is always bubbly and buzzing with energy.  So I choose  pink marshmallow tones and Loulou more pop and citrus colours. 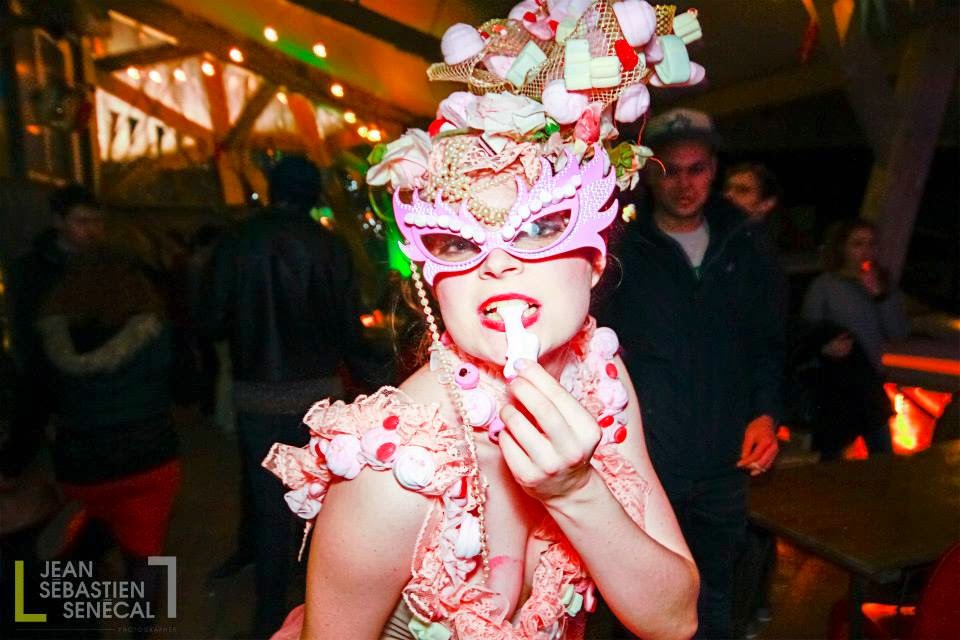 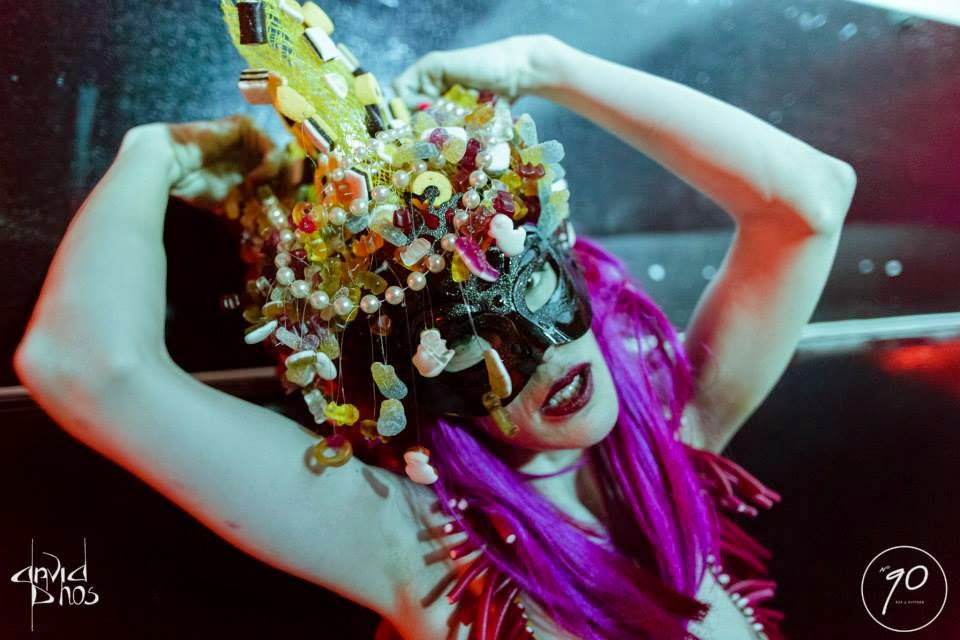 We had very little time to do the dress as you don't want to do it too long before as the candy can become sticky with the humidity. In the the night we had to envelope the dress in plastic foil in order to conserve it. 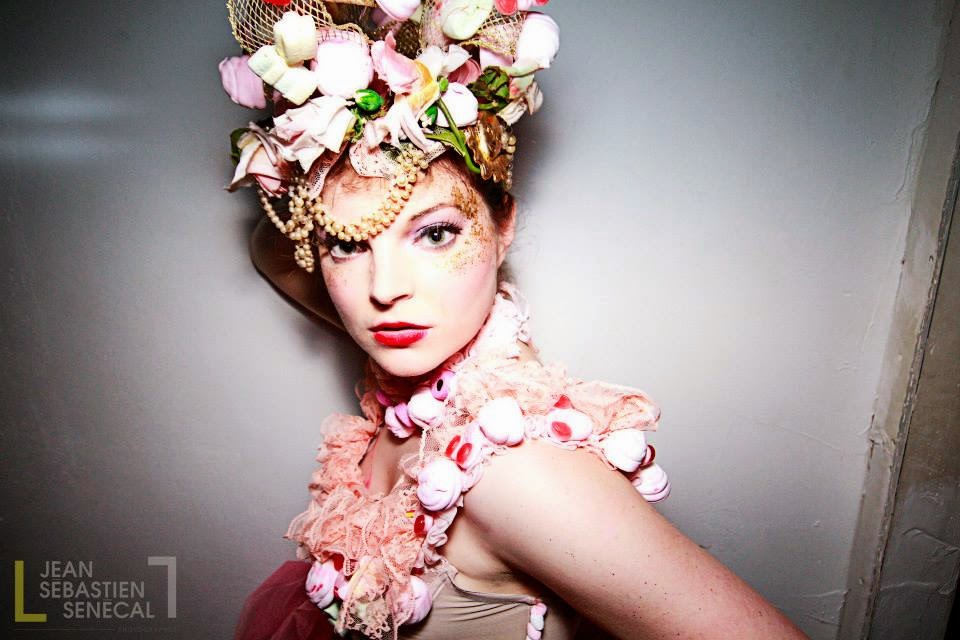 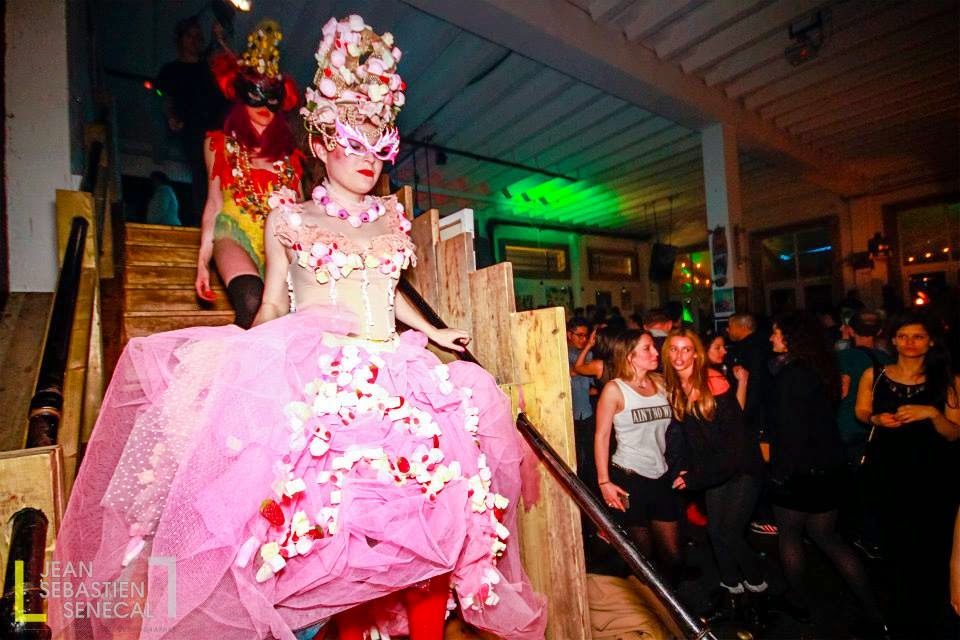 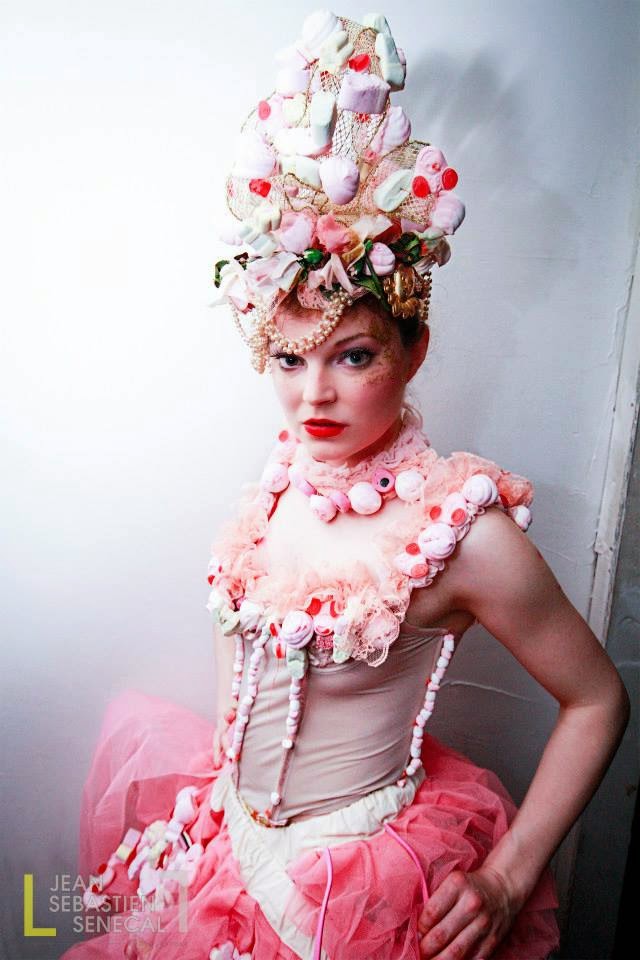 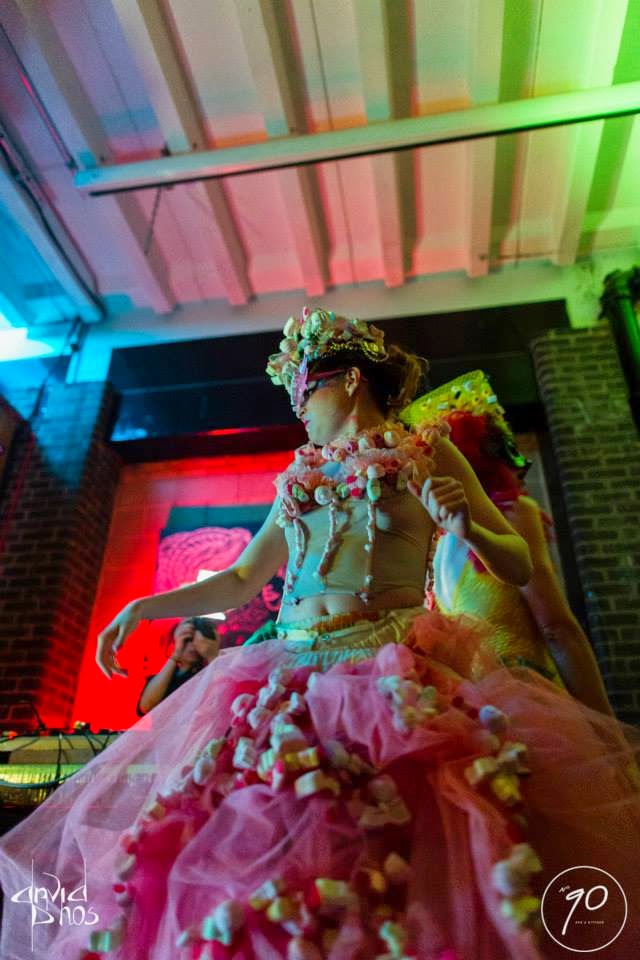 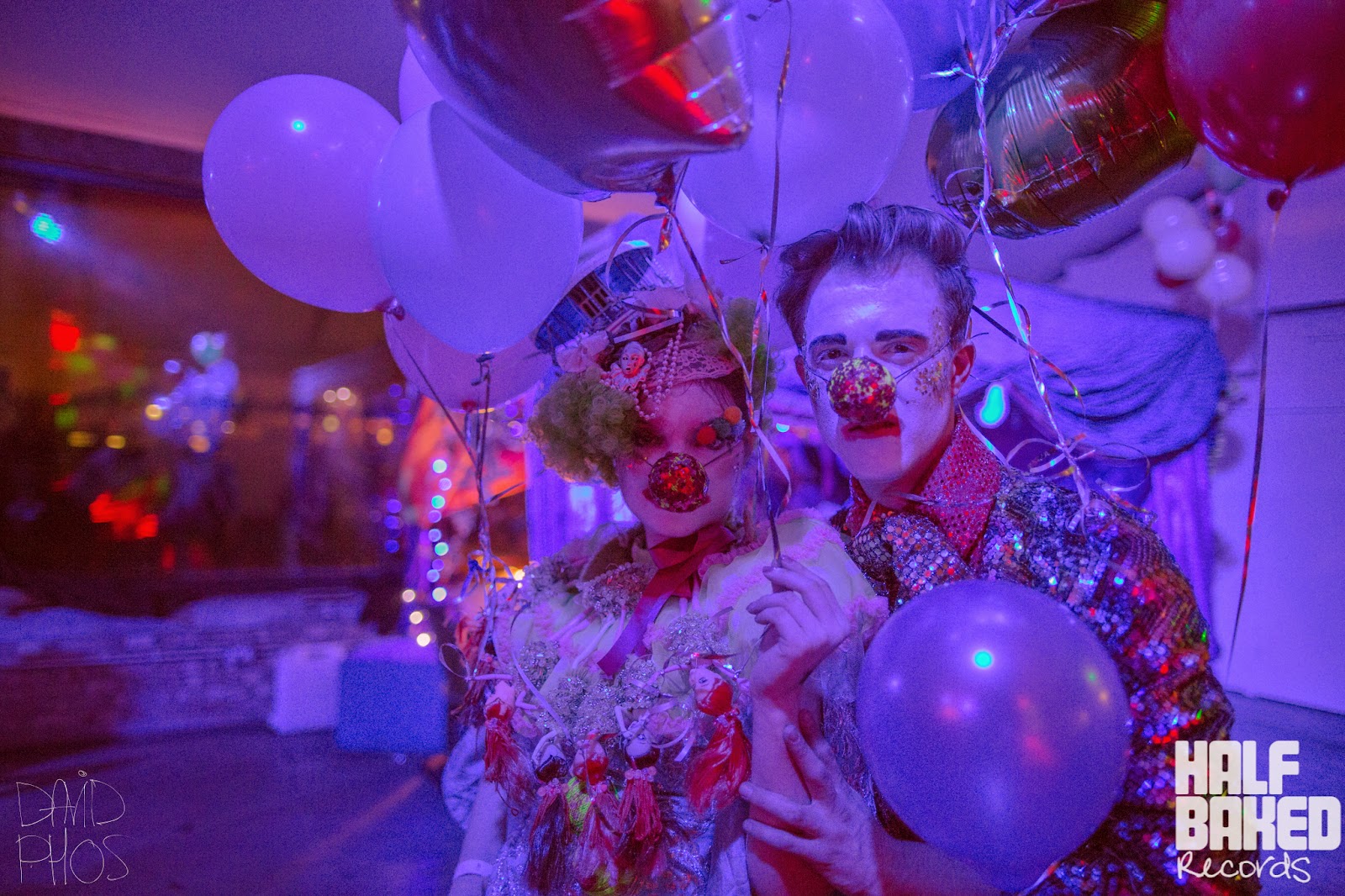 For Half Baked record party at the Oval Space in Bethenal Green we created this psychedelic Tim Burtonish clowns performance.  Some kind of creepy fashion clowns on acid. 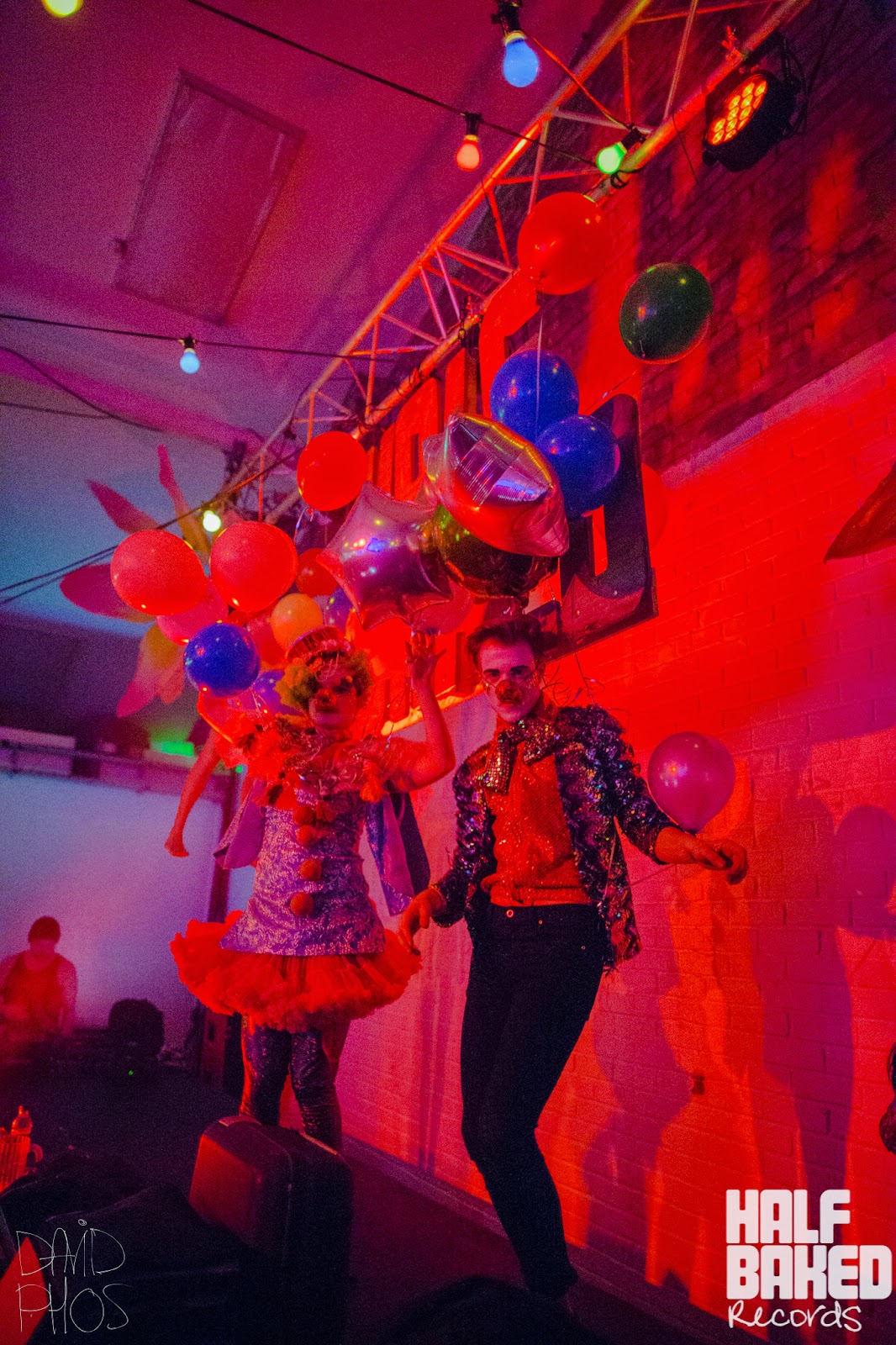 We danced on the stage and had some helium gallons attached to our costumes.  gradually we were cutting the balloons' ropes and giving them to the audience. 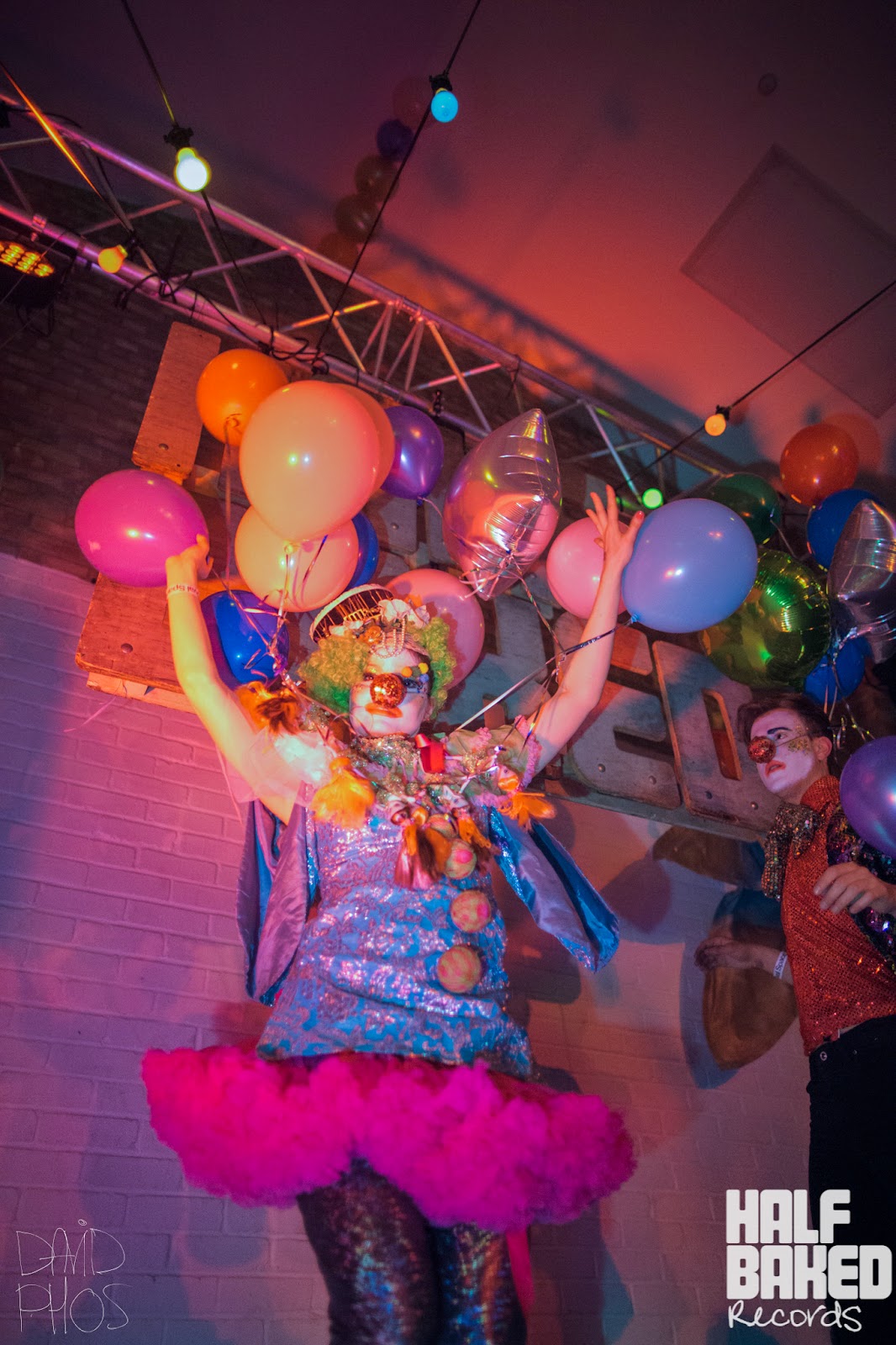 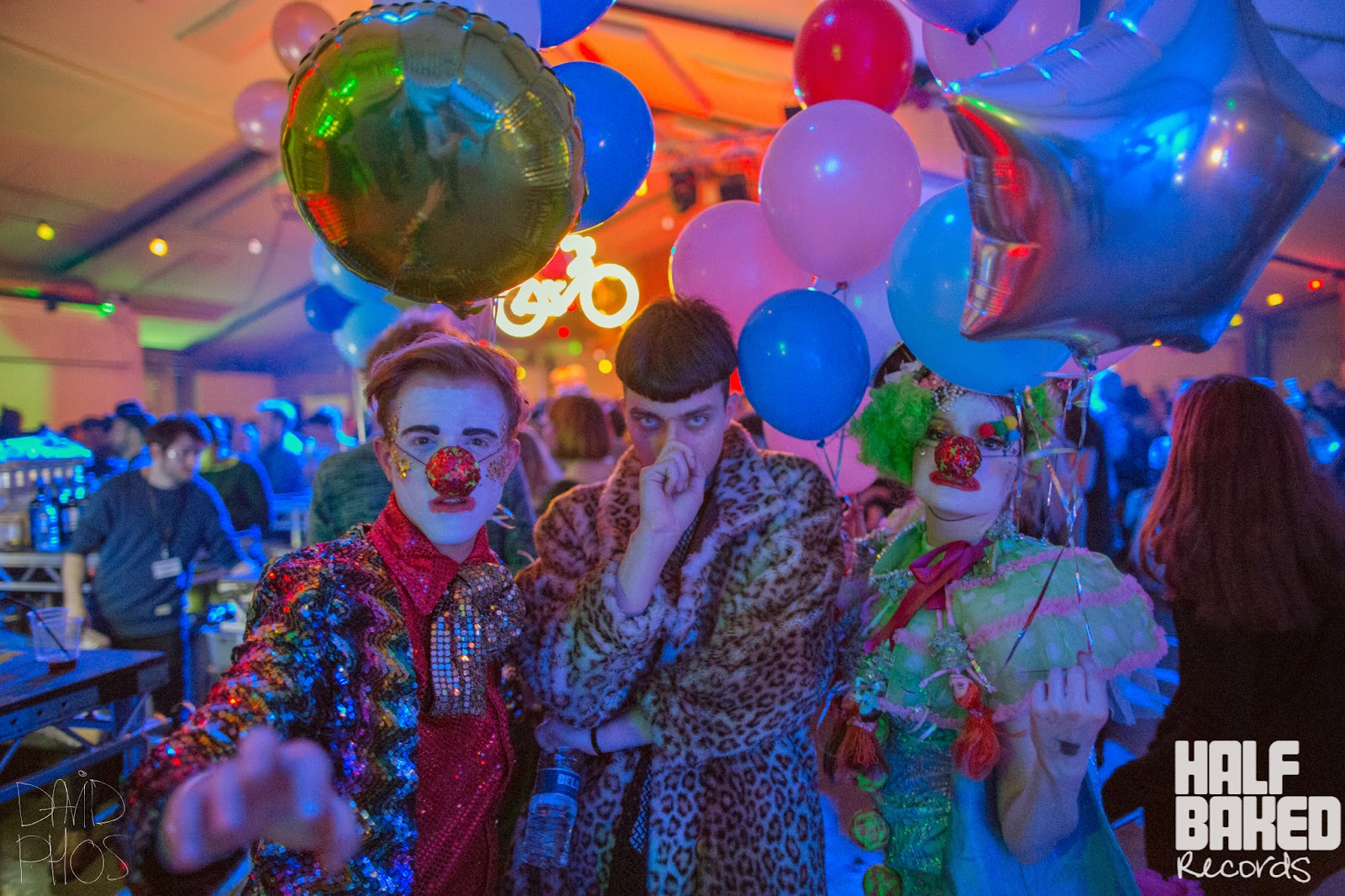 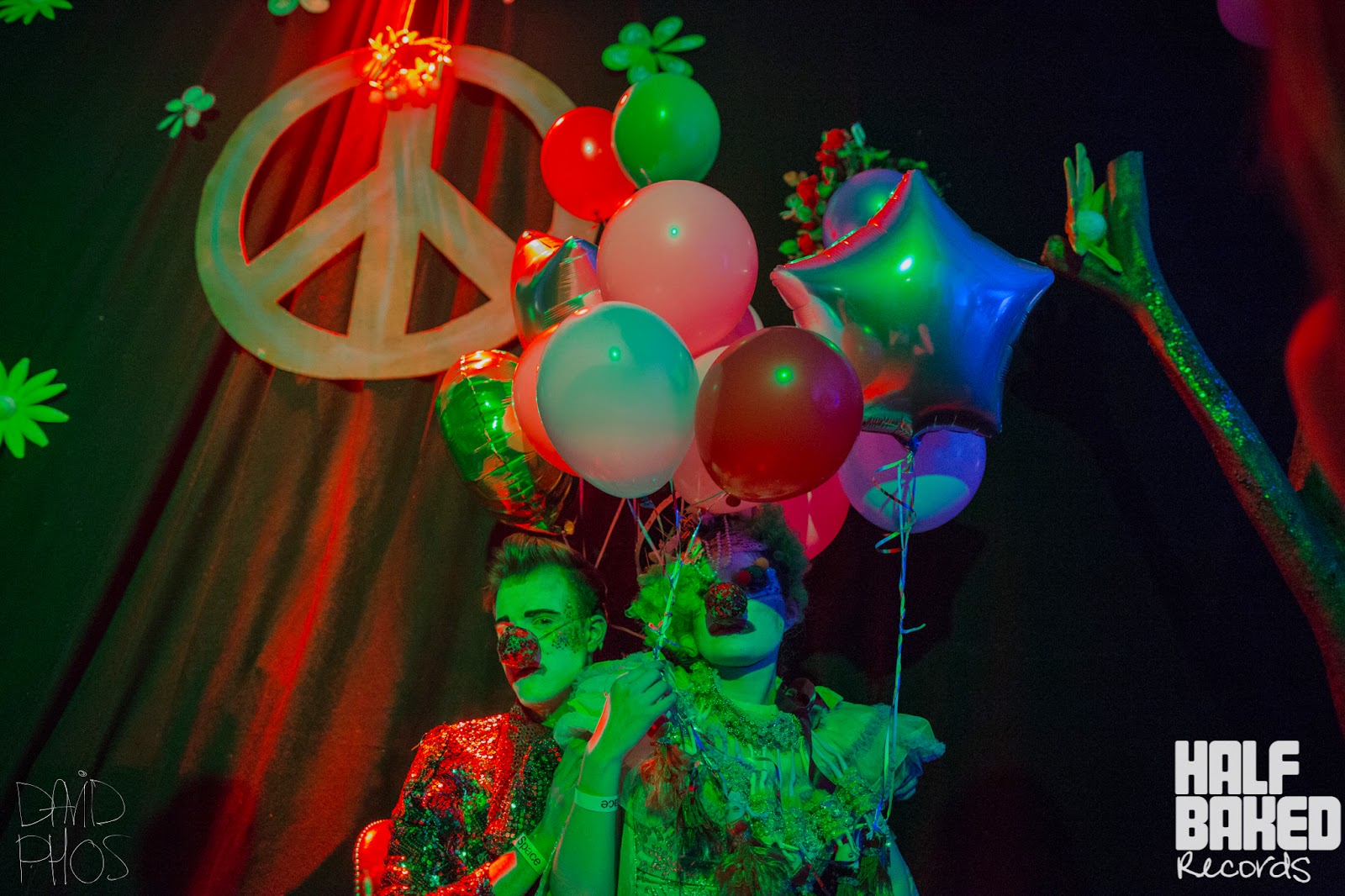 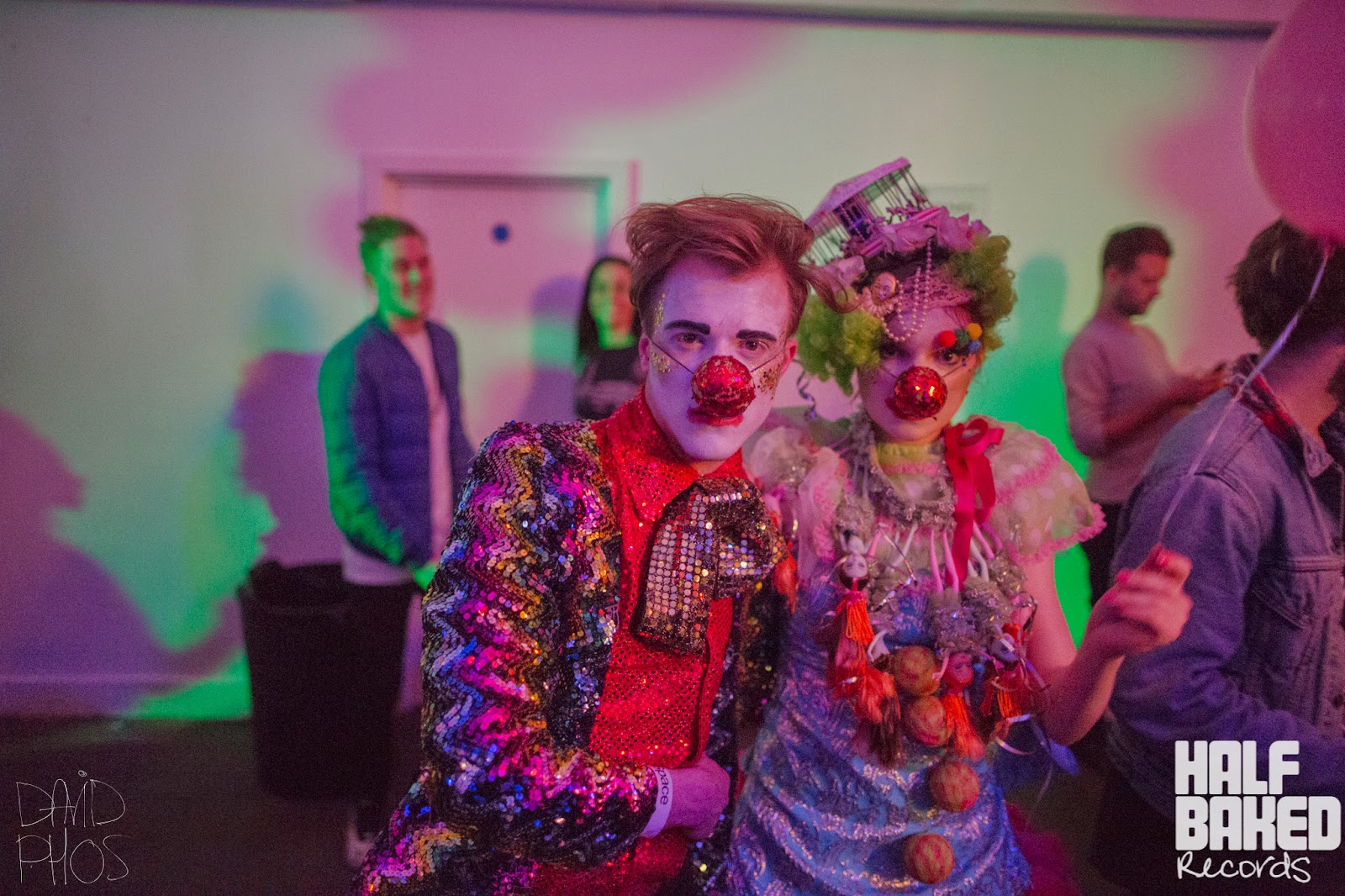