On this Pride weekend last , I organised a Fabulous Extravaganza of Food, Fashion and Colour  at Shed London in Haggerston  along with Florent Bidois, Carey Marvin and Monsterlune. Sue Kreitzman, aka the Colour Goddess, was brilliantly  compering the fashion show and cheering on us.


My work is always colourful, playful and theatrical.  I mainly  works with recycled material, reclaimed fabrics and unwanted toys.
Each outfit is a world in itself and has it his own independent concept rather than being part of a collection with a common theme. This "collection" is a more ready to wear" part of the work. A bit like Marc by Marc Jacobs or Karl by Karl Lagerfeld.  Even if it still take courage to wear the pieces in a beige world, they are more practical than my extravagant costumes and allow people to get on with your everyday life with a  touch of fabulousness.  The aim was then to launch a wearable art clothing line. 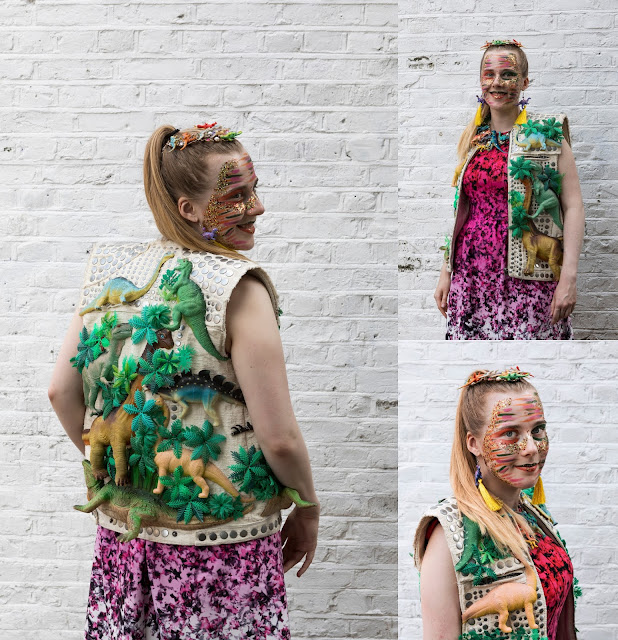 Alice Edwards wearing my Jurassic Park jacket, I used a beige  canvas base with studs that looked like an adventurous explorer jacket.  The process was quite long as I had to cut in half very precisely the big size dinosaurs and drill holes in them and then stitch them on the jacket to create a kind of embossed landscape.  A friend told me I was like Damien Hirst, with a dinosaur version of his cut in half cow sculpture!
Then I stitched the leaves of plastic palm tree around them to link the dinosaurs between them and recreate their natural habitat giving the feeling of a lush jungle.  They also provide some camouflage so the game is more fair with the dinosaurs hunters!


Lucia saved the show as I had a lost minute drop out.  Originally, she came with her friend Cynthia who was modelling for me just to see the show.  When I asked her to model for me, she was surprised but exited another exotic beauty gave another dimension to my tribal pearly mermaid look.
During the preparation a very nice moment happened.  I started to glue some gemstones on my face to create a continuity with my headpiece. At first I thought I will just do it around the eyes and then I started to expend.  For a dramatic effect I felt I would look good to cover my entire face and create a kind of gemstones mask.  The only problem is it was taking forever and the show was getting close.  One of my model saw me struggling on my own and took a brush and started helping me gluing the rhinestones, then another girl followed and an other one.  At the end it was a real team work and got down really quickly.  It was like a beautiful ritual of sisterhood where women were coming together to adorn a face with crystals. 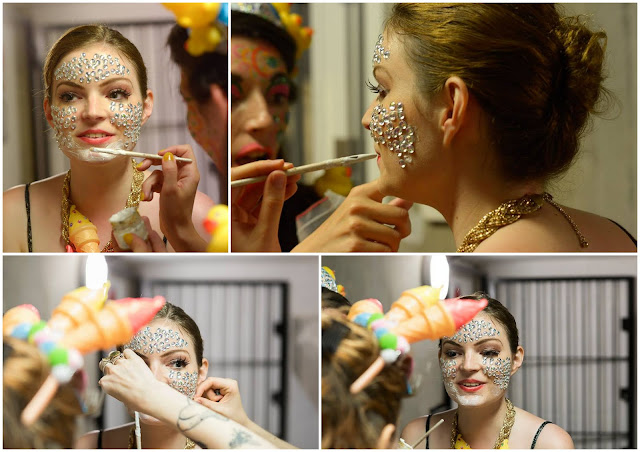 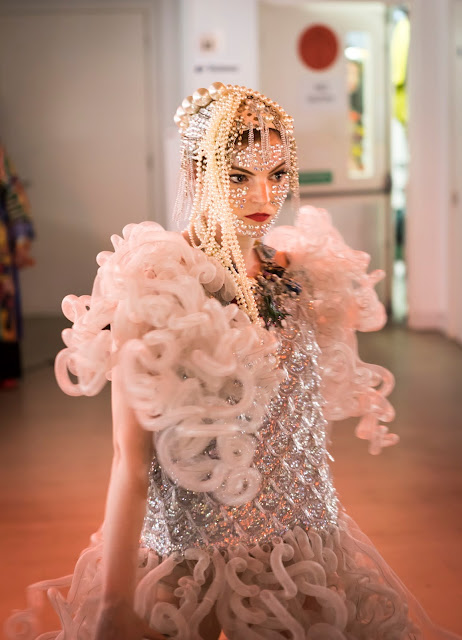 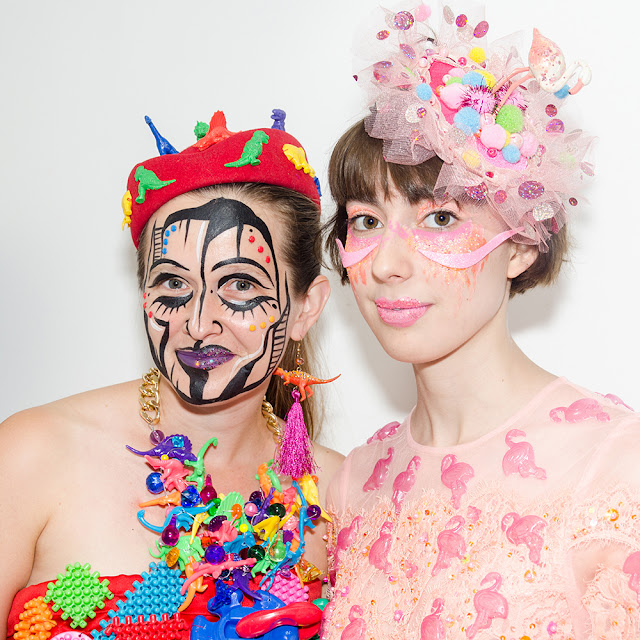 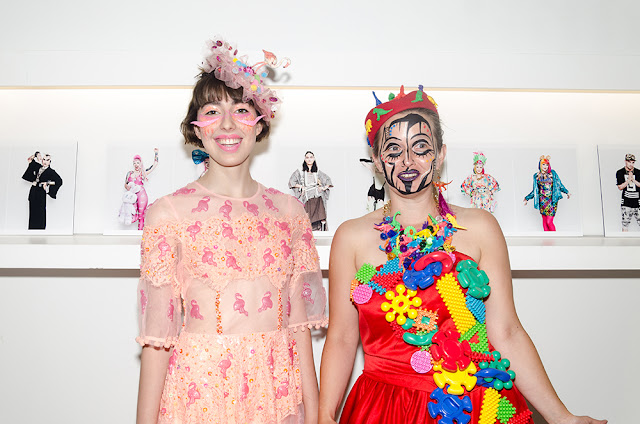 I don't do fashion week or polished show room it was a bit of a renegade show.  There is no backstage, no catwalk, no money, no professional models,  but just the will to express yourself and make it happen, in a kind of punk attitude and energy.  You don't wait for the opportunity, you just take it.


Also for this show, the idea is to be a meeting point between two creativities and she attempted to match  the outfit with the style and the personality of the model who are all friends and creative people with their own imagery and aesthetic.

Like my previous show I was surrounded by positive energy and good will of people giving me there time to support my work.  I kept thanking them but they also kept thanking me for the joyful and empowering experience. Is it extremely satisfying when you can be in this win win situation of getting out of every day life and feeling more confident and fabulous.

The show is not about being pretty.  As a soundtrack for the catwalk (see the video) I choose "Why are you looking at me" by Grimes. The song as a particular resonance for me as, sometimes, when  dressed up I feel like a freak show that people are staring at.  I wanted the girls to own it, to defy the audience, to challenge it.  The staring as an ambitious status, a mix between awe and fascination, by presenting the piece in a show obviously you want the audience to look at the design, but at the same time you question the unhealthy voyeurism of people who aggressively looking at people who dare to dress differently in their every day life. 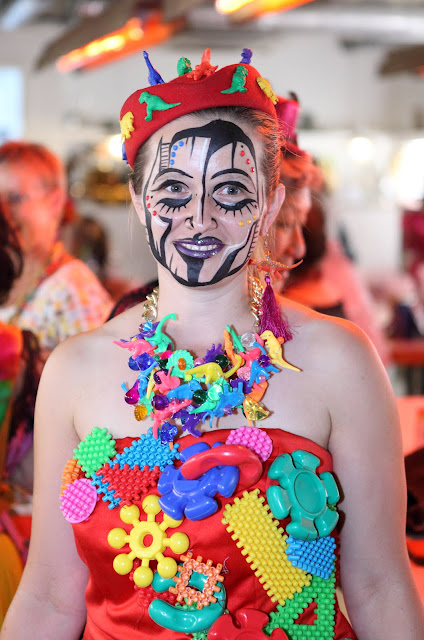 I get my models from everywhere, from friends from extra jobs, from when I used to work in night club, from previous projects, facebook connexions... I am happy that theses people from different world meet and come together to create a show.