Despite completing a massive project for a big international company, I manage to escape few days for my traditional holiday in North Brittany.. but it wasn't a quiet holiday. I was recruited to help organise the challenge, a kind yearly nautical event, (can't really explain… you have to experiment it to understand it)  the theme this year was "sports" I was coming back from Wilderness, and preparing a meeting with the project manager and the friend in charge of the event told me they have ordered costume for everyone, except for me as she thought I would prefer to make my own. So I rushed to the Poundland to fill my basket of kids outside games, foam balls,  golf, clubs tennis rackets, orange cones. I took it to France on the the Ferry (the advantage of travelling by car).
Then in my holiday house, rather than going to the beach, I stitched the balls and equipments all on a silver bomber jacket just before the event.  Because like Churchill, I don't do sport, I decided to wear it on my with the symbol of the different sport sewed on the jacket and the headpiece. Also the theme colours was orange, a colour I don't really wear normally, but I like the contrast between the very sophisticated orange sheath dress which has nothing of sportswear and the difference sport equipments.  I also liked the graphic and dynamic lines created but the cones & golf club. 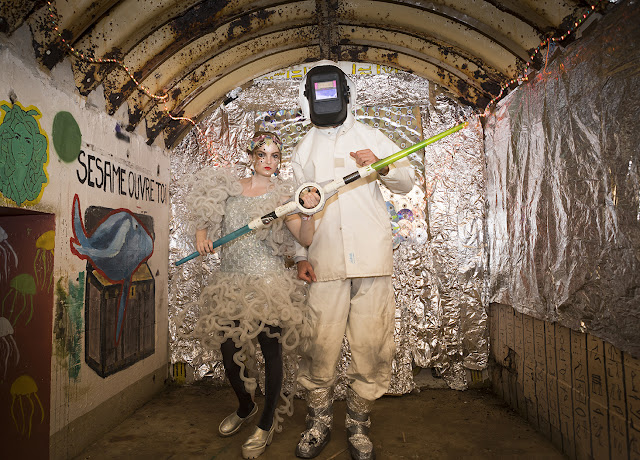 Every year, I also organise a party in the old Germans' bunker in the garden of my parents house.  This year, the theme was "space invaders",  but this summer I didn't really  had time to make a costume especially for the occasion because of my big commissioned project,  so I took a dress I had in my last fashion show that I feel was the closest to the theme.  The weird plastic wire makes it quite futuristic looking for me like spaceship pipework, and my boyfriend offered me an holographic headpiece from Jane Bowler that completed my space princess outfit.

Going to holidays is also an opportunity to  change your skyline and discover new magical places.  With Anthony Lycett, we works on the Into the Wild project in the UK but why not taking advantage of going abroad to shoot in  exceptional location?

We wanted to find a landscape with a dramatic rugged landscape so some locals advice use "Pointe saint Mathieu" in North Finistère , and we didn't hesitate to drive there. We were not disappointed in front of the hostile rocks endlessly assaulted by the violence of foaming waves.

Who hasn't dream of being an archeologist or palaeontologist  as a child watching indiana jones or Jurrasick park?  When I was 7 or 8,  I remembered some holidays in the mountains where I found a small fossil ammonite among the rock and I felt so proud as if I made a major discovery!