In this article I am exploring the relationship between my designs and some mythical and very popular creatures like my little pony, flamingo, mermaids and dinosaurs:


I have a fascination for my Little pony, slightly bad taste toys and openly kitsch. They are such just such pretty creatures, with their glittery manes and diamonds eyes.  Yes they take a lot of room but I love collecting them in every size and every colours.
For this picture, I wanted to surround myself with all my collection, a kind of American beauty remake with fetish toys.  Who never dreamed of swimming in a my little pony swimming pool? The difficulties was to have a natural pose, as If I was standing but lying down!

I made this pink my little pony crown from a pantomime headpiece.  I recreated a kind of magic world dreamy microcosm with pony and pink castle tower. I hand stitched sequins on the wings and adorned the pony with glitter and gemstones.


For the skirt, cut out a plastic display that had the shape of a dress, filled all the plastic pockets with small my little pony as if they all have their compartmentalised boxes.  I added plastic  brushes for the pony to take them of their sparely manes, and sprinkle them with glitters before sealing them by hand-stiching them with pink ruffles.  I then stitched the whole creation on a blue PVC base.

Mermaid, a massive trend every summer! which girl have never dreamed of being a mesmerising sea creature?  For this look I didn't wanted to focus on the fish tale aspect of the mermaid but more on the seashells, scales and pearly elements, creating a new wave look between pearly queen and sea-punk aesthetic.

Pearls is a very noble and precious material,   it symbolises purity and wealth   and pearls necklace are often wore with pride  by posh high society women.  Whereas denim is considered as more grungy and  associated with a casual everyday look.  I found interesting to mix the two and use the discrepancy to  create a baroque and Rococo ( Barroco  meaning irregular pearls in Portuguese ) piece.


Triton is the father from the Disney " little mermaid" embroidered with beads, with shiny rhinestones as nipple tassels.
He has  its cortege of sea punk green hair mermaids with  skirts hand stitched with sequins and tail adorned with rhinestones.


Another cult creature: dinosaurs which have a very strong sympathy coefficient.  They are non controversial animals as they disappeared and are now advanced to the position of mythical creature alongside unicorns or mermaids.  Everybody love dinosaurs because they are associated with a  visit at natural science museum or illustrated books from childhood so they trigger a feeling of nostalgia.  People find them "cute" and "fun" even if they were meeting them in real life, they would be terrified by theses ferocious animals.

For this Jurasick Park jacket, I used a beige  canvas base with studs that looked like an adventurous explorer jacket.  The process was quite long as I had to cut in half very precisely the big size dinosaurs and drill holes in them and then stitch them on the jacket to create a kind of embossed landscape.  A friend told me I was like Damien Hirst, with a dinosaur version of his cut in half cow sculpture!


Then I stitched the leaves of plastic palm tree around them to link the dinosaurs between them and recreate their natural habitat giving the feeling of a lush jungle.  They also provide some camouflage so the game is more fair with the dinosaurs hunters! 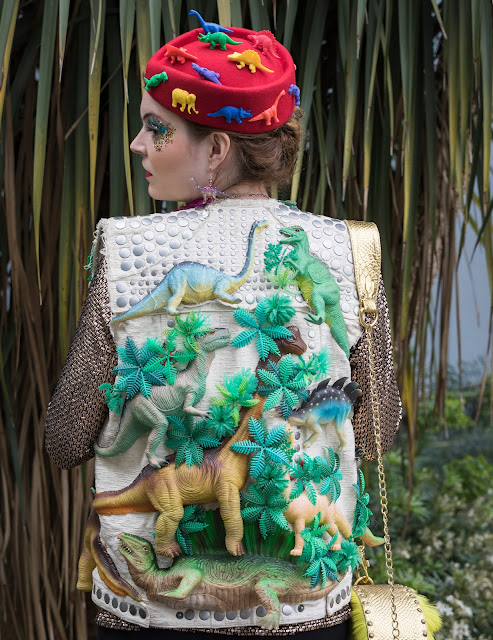 The Colour Walk is an informal gathering of creative people getting dressed or dressing up to inspire and be inspired.
We do normal stuff, chat, drink coffee, eat and shop in the market, the only difference is we do it with style and make the effort to dress up.

Somehow we stage ourselves, it is a new dandyism but it makes us feel better and some people acquire more confidence in themselves stimulated by the benevolent reassuring environment of the tribe and the compliments on their creativity and their clothing founds.
This not an elitism movement, a private members  club,  everybody is free to join as long as they wear colours! 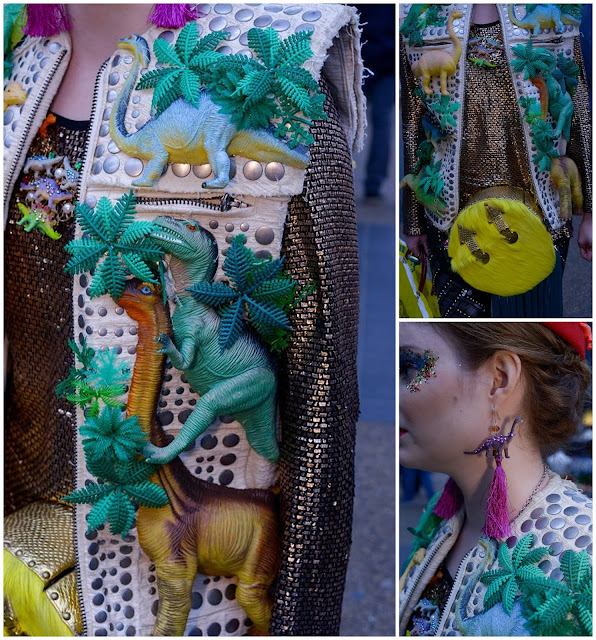 details of the dinosaurs outfit by Richard Kaby

For "the return of the goddess" event in Walstomstow" I wore my flamingo costume dress.
Flamingo is a very popular animal at the moment as you can see it everywhere in trendy design stores.  With his elegant pink figure he is the king of festival fashion!

Originally it was a costume for a child that I cut in the middled, embellished with ruffle and pink ribbons and a crown. I matched with a giant disco sequin dress and create a pink sequins cape. I  the design  fact that the outfit really stand between a costume and a fashion outfit. 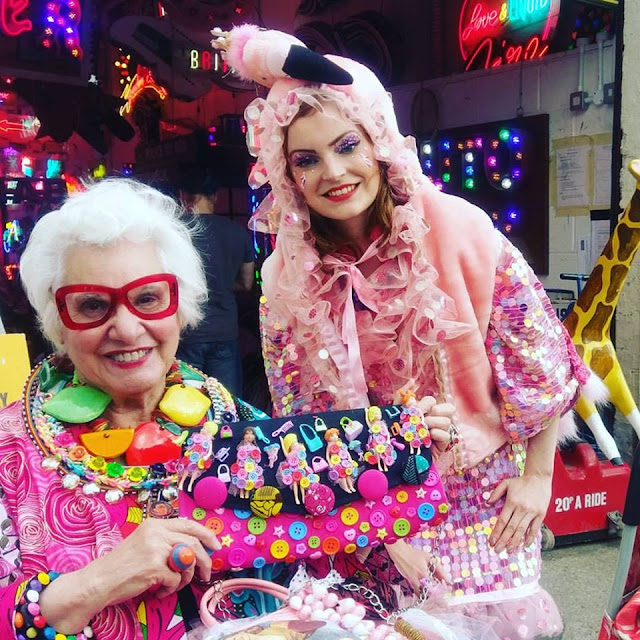 The bag I made for Sue Kreitzman with hand-stitched colourful buttons on polypockets and wax print buttons.  The poly pockets have their set of accessories. 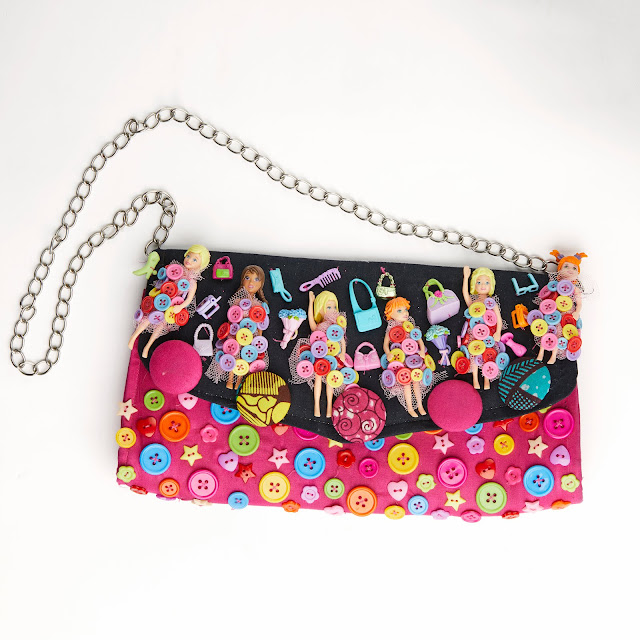 In the frame the photoshoot for Phoenix magazine about portrait of artists in their environment (see project on Anthony's website), I went to Sue Kreitzman house, a magical world for fan of maximalism art.  A place where I always feel at home, sharing spiritual conversation and delicious food. 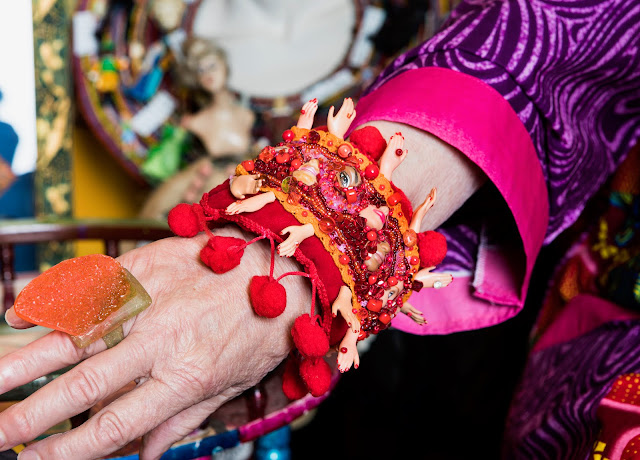 The cuff I made for Sue with barbie eyes and mouths with red pompons and beads. 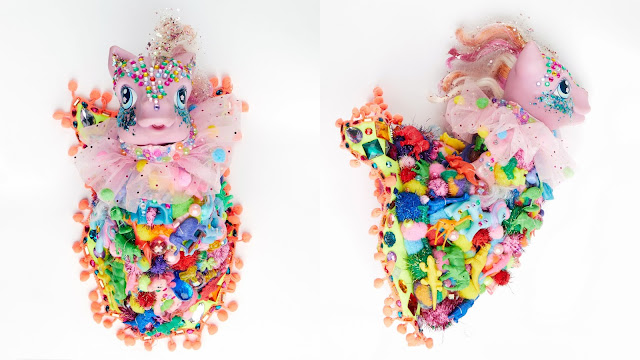 Another mythical creature that I created myself,  very fun commission I did for a fan of colours and collector in South of France. 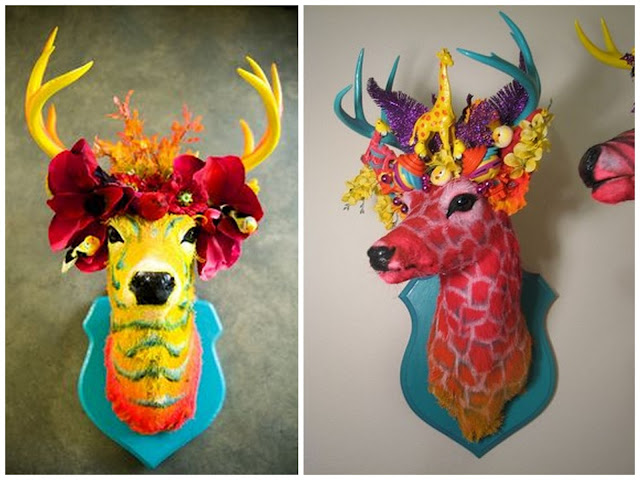 This is the inspiration, she wanted a hunting trophy aesthetic without a real taxidermy stuff animal but a giant my little pony head.

I created this hybrid mythical creature with a my little pony head and a horse neck, Not using taxidermy allowed me to create my new bestiary of imaginary.

Iwona Pinkowicz, a London based visual storytelling photographer came to my place to take my portrait for her "dream project".

I said my dream was "to grow my buisness of costume and fashion design and get my own studio on London".