I have a thing with old telephone and curly elastic telephone cord. In all the show I used to direct, I had a old telephone to symbolise communication.
For this hat, I wanted a retro-futuristic aesthetic  to match the dynamism of my marble run jacket.

I am not the first one to make a telephone hat, lots of my design are inspired by Lady Gaga music video and the genius telephone hat made by Fred Butler. 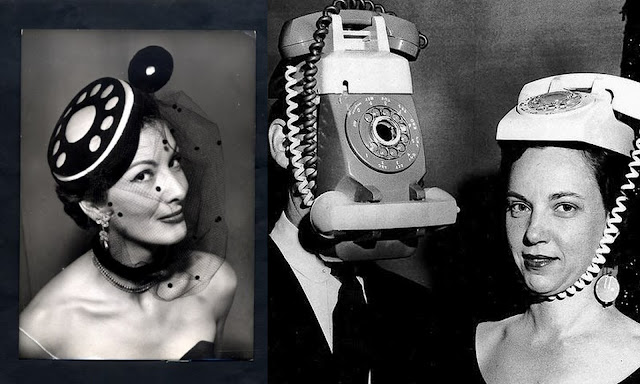 But before her, in the 50s, surrealist played with the phone accessory and Jean Barthet, made a Phone-Hat, photographed by Robert Cohen in 1951.

The holographic fabric and the colourful cords give the impression the phone is directly connected with my brain like in bad science fiction movie and that you could access directly yo my though by picking up the phone.


Tribute to "Telephone" my favourite song from Lady Gaga which was the soundtrack of all my parties in 2009!


For the jacket, I drilled holes in the pipe and stitched them one by own to the jacket in order to create a kind of extension of the woman body as if I was a machine powered by all my pipes!


When Sue Kreitzman  saw my hat, she immediately wanted one as Telephone is part and parcel of Sue's imagery.

We went to a very nice guy stall in Spitafields who sells traditional English hat and know everything about History of hat and Sue bought a bright yellow bowler hat as a base.

Then she asked me to do my magic, I took the hat to my studio and added the telephone handset and, cord and dial.  I painted a lips brooch in red to represent the goddess talking to the phone, with some smaller shiny mouth representing all the Sheros the Goddess is communicating with. 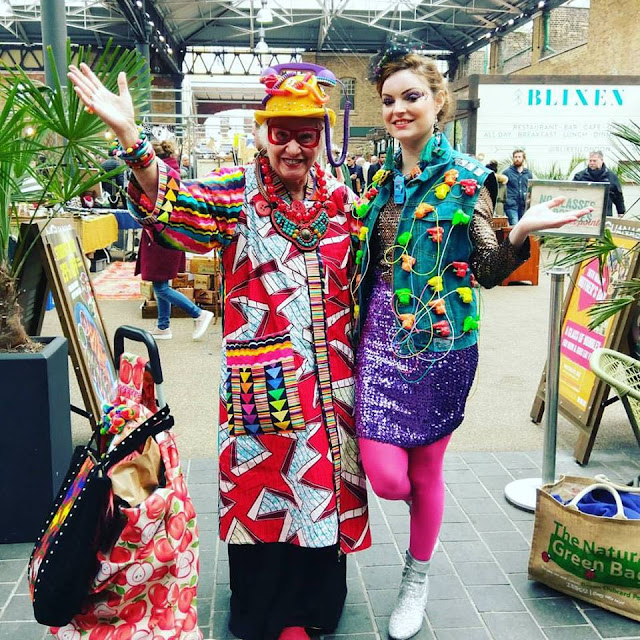 For Sue Kreitzman, the Goddess telephone is the direct line to the after life, this is her conception with her own words of it:

I have no idea if there is an afterlife or not, and - if there is- what it would be like. I suspect that, when we die, the lights go out and we have had our time on earth.
BUT!! I have a fantasy. A fantasy of the afterlife. This is for women only. (I'm sure that men have their own afterlife fantasies, but I really don't need to know about them!)

This is my version of the afterlife:
We die, and then...we wake up in the waiting room. The goddess phone rings. 'NEXT'. It's our turn, we go in for the interview. The interview will determine whether we will spend eternity as a Goddess or a Shero (a female super hero). And lo and behold: we are dressed for the interview. Sparkles, glitter, wings, sequins, lightening bolts, halos, bright dazzling colour...all those things that a shero or a Goddess will need for all of eternity. 'Choose me, choose me' we cry. 'Look at my glitter, my wings, my halo! I am perfect for the job.'
Of course, we pass the interview. (I myself will be a Goddess. At somewhere between my late 70s and eternity, I am halfway there already.)
So for eternity, we dress in colourful and fantastic garb, and swan around the universe doing our best to right wrongs, establish justice, banish beige, and generally make the world a better place. 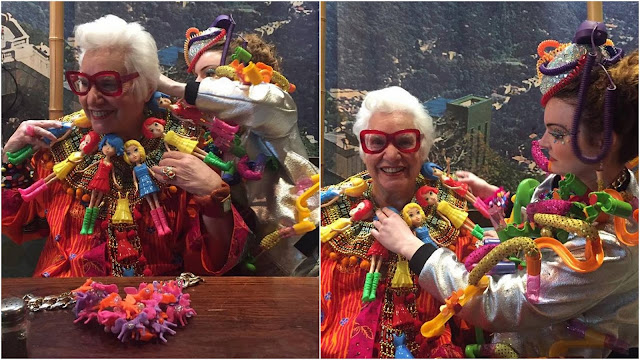 Another commission I made for Sue, this giant colourful dolls on an Egyptian inspired breastplate adorned with red pompons. 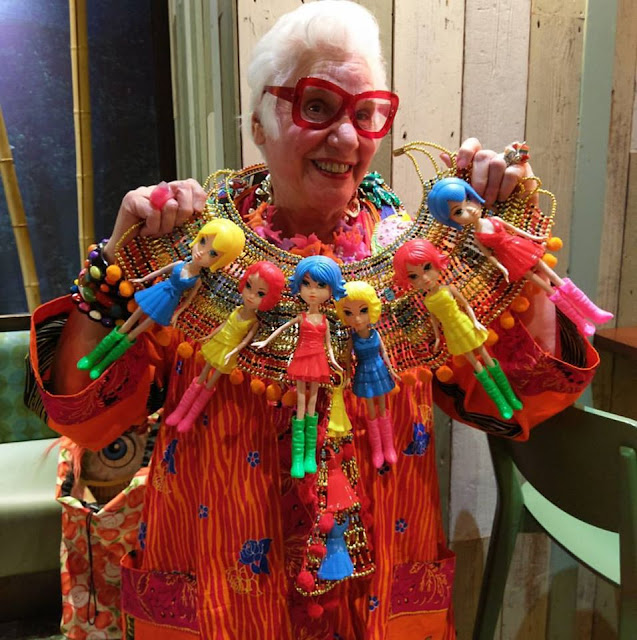 In March, for the launch of Number 177, Number 90 little sister, I was commissioned a present dress performance.  I recycled the dress I used for La Cage Royale performance, I covered the Circus children tent with burgundy velvet and stitched present boxes from the Card factory.

I offered the audience to open the boxes and inside where drink tokens, goodies, sweet and small dinosaurs!

Then I did it again for bar 90 third birthday so I changed the costume a bit, I made a birthday cake fascinator and a pieces of cake neckpiece!

People could also go under the skirts to open smaller boxes with more presents lightened by LED lights! 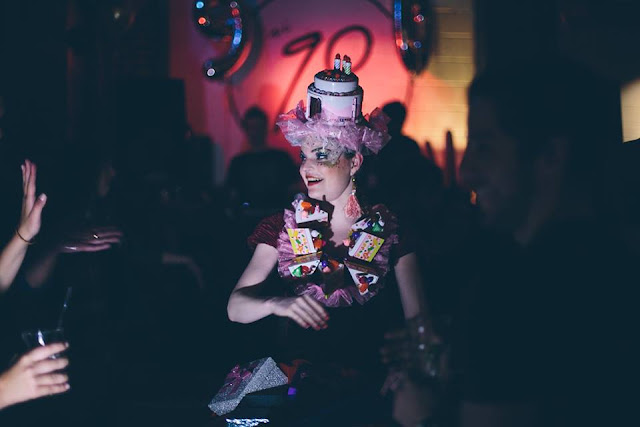