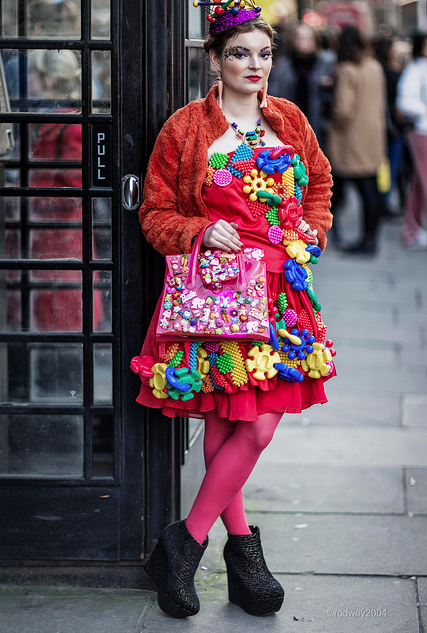 For me, during fashion week, the real catwalk is always in the street, I always found people more inventive and playful with their clothes outside the fashion show and show room.
I know, this is a though of someone who is not part of the fashion world, who doesn't have the right connexions and express its frustration.  In my case,  It is a bit true I have to admit it, but after a day of working in my studio I find it hard to go out and try to socialise.  But this season, I made a big effort going to few show and event like Joshua Kane fashion show, Amechi Ihenacho presentation, Sorapol presentation and last but not least, Daniel Lismore book launch who was meeting point  between the fashion and the art world.  And maybe my day I will have my own show!

I always had a fascination for construction games as they are inventive imaginative, stimulating creativity at a young age.   Coloured and non gender specific, non figurative they are the perfect material to play with as it is just about shape and colours and possibilities of assemblage are infinite.
Stitched on fabric, they become less less square, more fluid and flexible as you changing the original rigid shape of the construction game.

The idea is to product a garment which is not only visual but  seek other sense like touch or hearing producing  brand-new sounds by the clinking of elements that shouldn't be stitched together on a garment producing a new reality.

I am not a tactile person and I don't usually like to be touched by people and especially strangers but the construction game create a kind of colourful armour around my body.  Paradoxically enough it makes me more accessible by the way I dress, I remain protected and my personal space preserved. 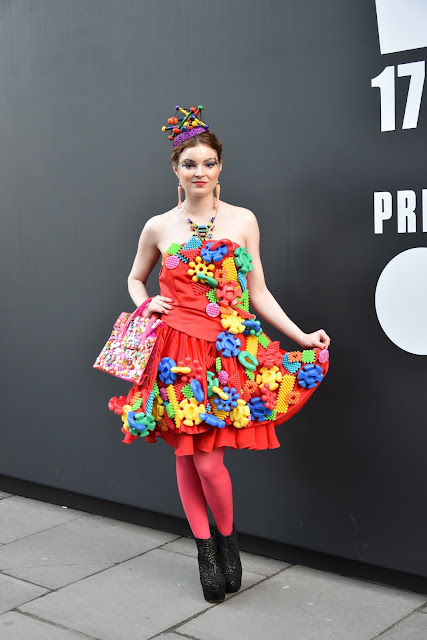 More and more, I just  dress for the occasion, when I don't have to go out or meet anyone, I tend to wear very basic and comfy clothes.  As dressing up is is like a ritual, it takes time and energy, you know it is going to be uncomfortable, physically and emotionally as you will have to deal with people staring (positively or negatively) at you. For fashion week,  I carefully curate my look and accessories but above all, I need to be able to cycle in them to the Strand in Central London. 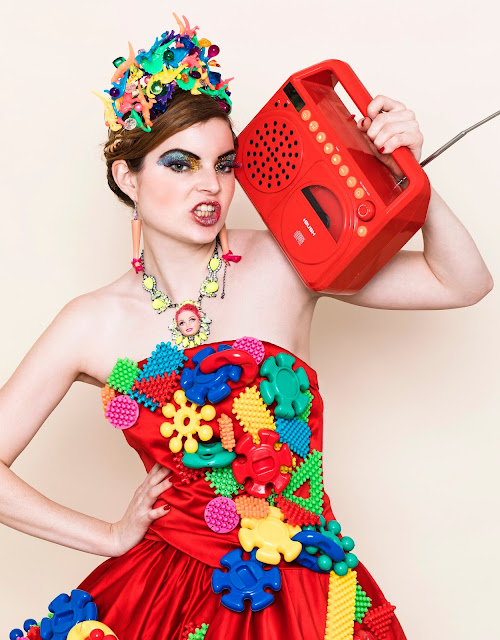 For the shoot, I wanted to make an ironic version of a "badass look" by making it not credible by using a plastic red cassette  as  a ghetto blaster.
I got it from a friend who was getting rid of stuff,  it is very bulky and take lots of room in my tiny flat  but I always know I will use it at some point as a prop!


As I say a lot, a final garments come from an object rather than an original design.  For this white dress, I find this weird springy material as a designer chandelier  in a car boot sale near my place. Straight away I saw the creative potential of this strange plastic fibre tube with metallic wire inside (can't really describe it). The guy who was selling it to be said he could look for bracket in his car but I told him not to bother as I won't use it as a lampshade I will take it apart.  I think he though I was crazy but I am use to it! Then I played with the material and stitched it to a vintage top with silver and shiny sequins I found in the same car boot sale few month before. 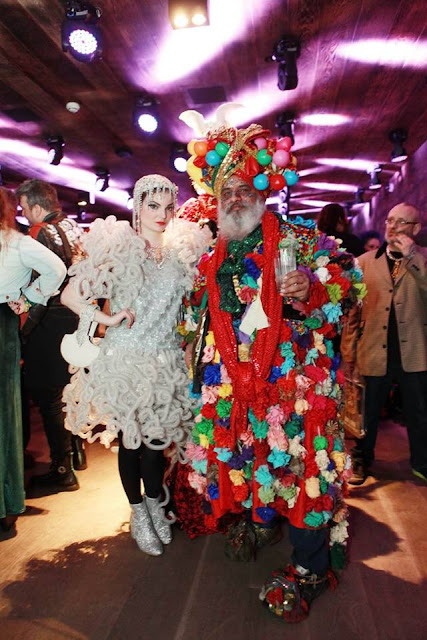 I usually don't wear white but I feel it just bring the light of the colourful looks of all the guests building nice contrasts!

I like the mix of material, between fabric and plastic, vintage and modernity  between a psychedelic medusa and a Pinnochio fairy on acid!   With my hat, I wanted to make it a retro futuristic Mia Farrow in post modern  Great Gatsby  remake. 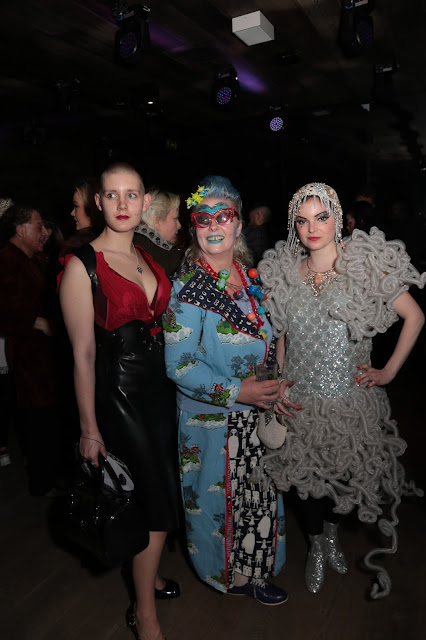 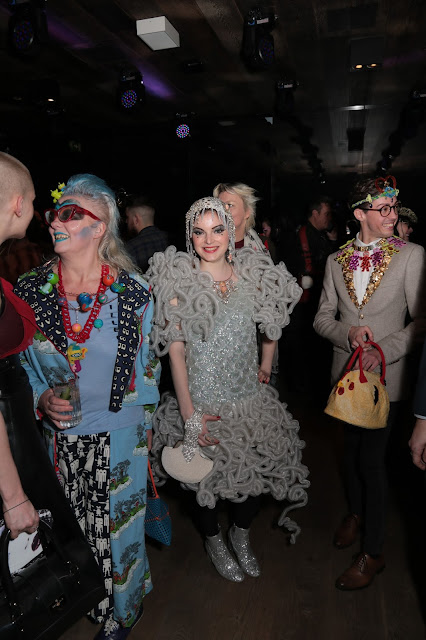 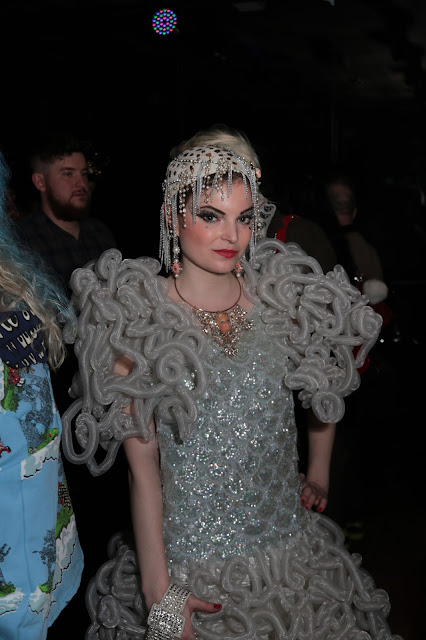 point presse:
The heroine's journey, on Peter de Kuster's blog.  I think everybody could be the hero of his own life! In my interview I also talk about major influences and my own heroines! 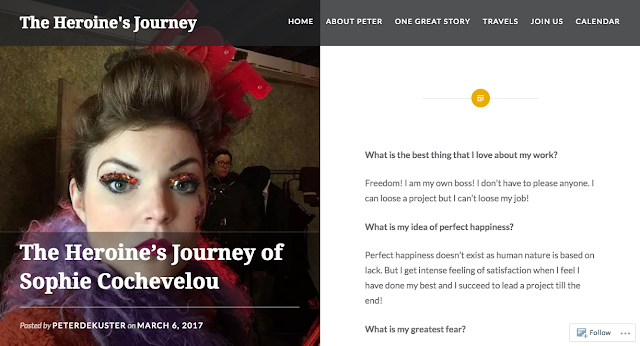