It is an established  institution now, every month, LuxuriouxsSnacks meet to host the Hackney Bingo Club at Number 90 in Hackney Wick.  For every single edition we now have a precise theme.  That challenge us every time to embody a different character or caricature when my others costumes are more conceptual, Essex girl, 80s Madonna, US gangsta rappers, and the last one French Clichés!

For the "Vive la France" Bingo I created a dress inspired by the union jack flag dress from Meihui Lui, Victim Fashion Label, combining vintage laces and british flags.  I also created a British flag a couple of years ago to dress as the British national anthem! So I mixed some white & cream petticoats with French flags bunting looking like a Bastille Day allegory mixed with a Delacroix painting "Liberty Leading the people". We pushed the French cliché to the caricature with a beret,  the Jean Paul Gauthier style marinère, a garlic necklace that Simon put glitters on but they didn't stay on. 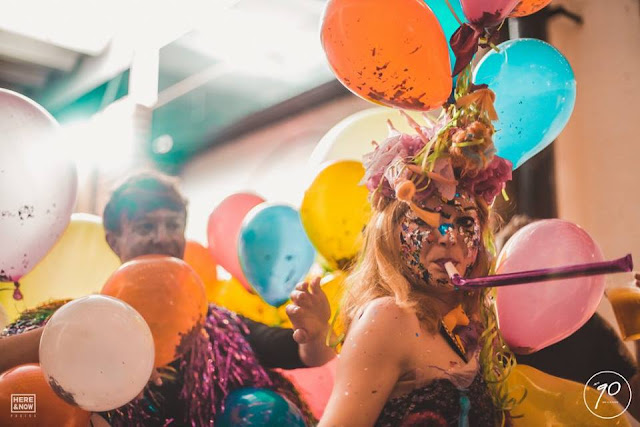 Luxuriouxsnacks also did a balloons performance for Number 90 second birthday. We spend more than 2 hours blowing up  dozens of balloons with helium filling them up with glitters and confetis (with a few balloons popping) tying them up to the costumes, dress and headpiece. 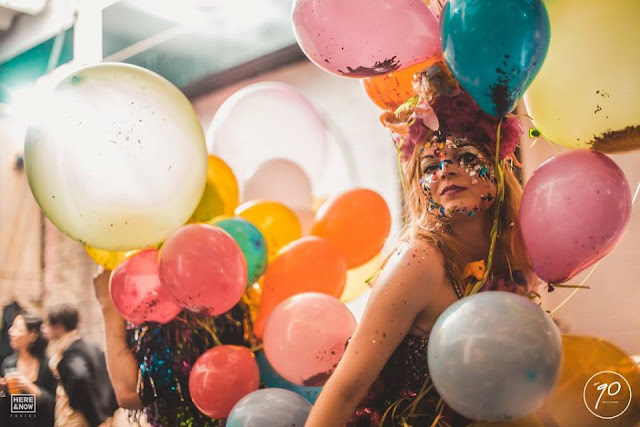 Then, we were glitter bombing people, I had a ring were I attached a needle on to pop the ballon over the dancing crowd.   Also the fabulous unicorn were blowing them with their horns. 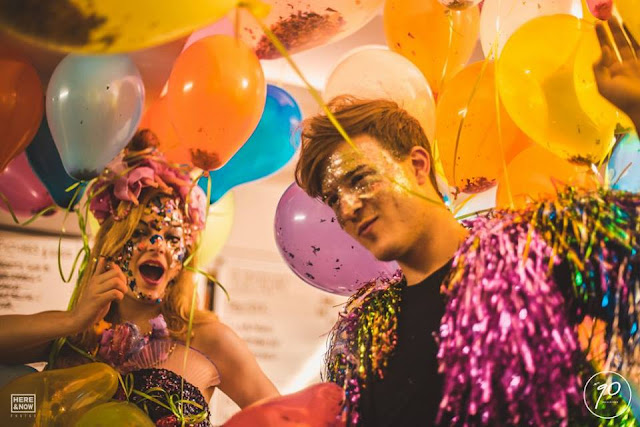 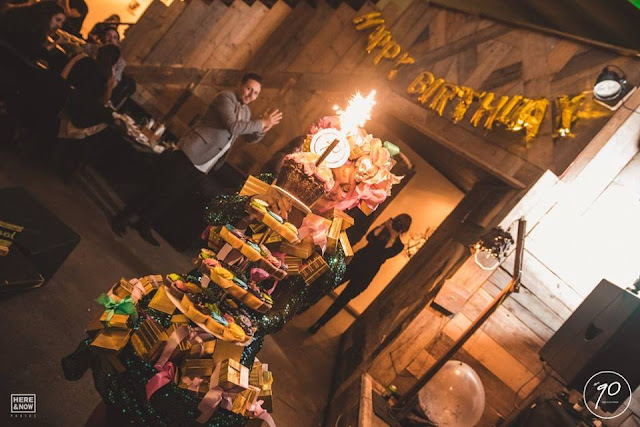 For the press day of bar 90 birthday,  I hosted journalists and bloggers in my presents dress. Goodies and drink tokens were hidden in the boxes of my dress and people has to open them in order to find their surprise. 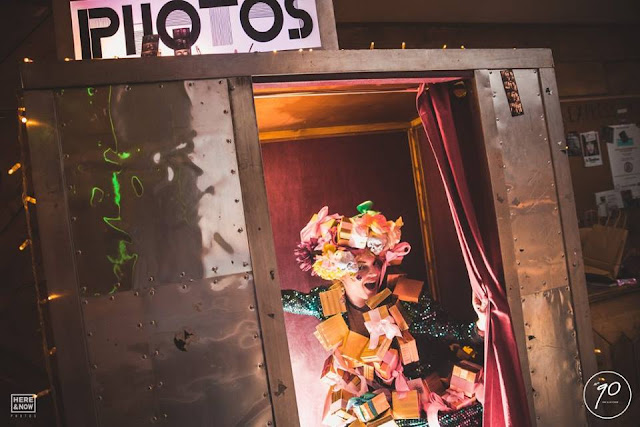 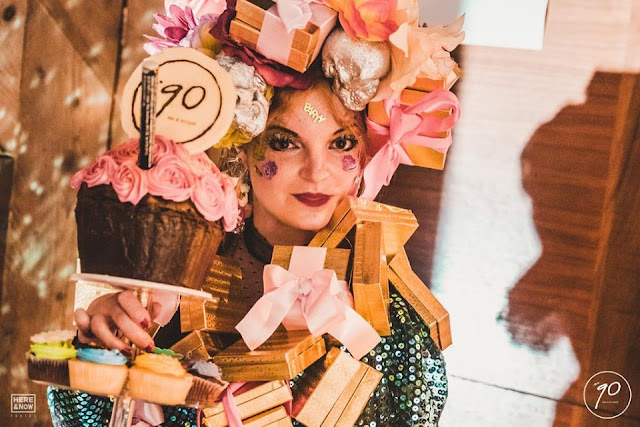 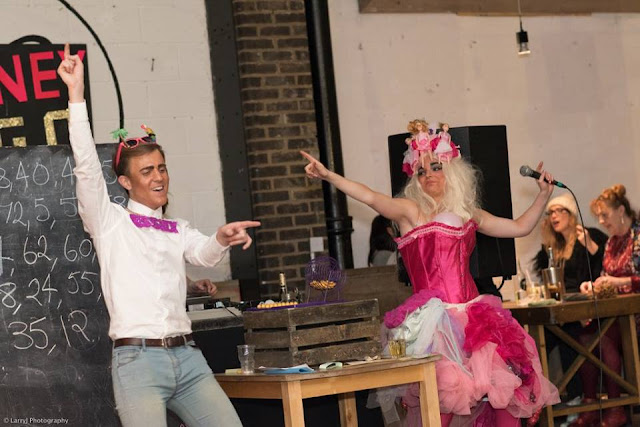 For the Only way to Essex, we used all the beauty code of the Essex style: fake tan, blond extension, fake eyelashes, painted eyebrow…  big balloons boobs. 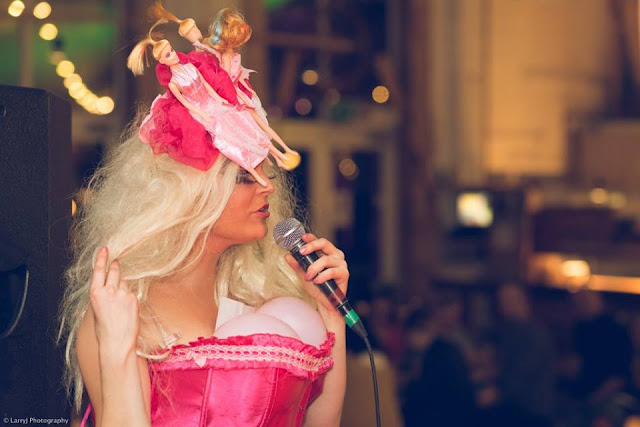 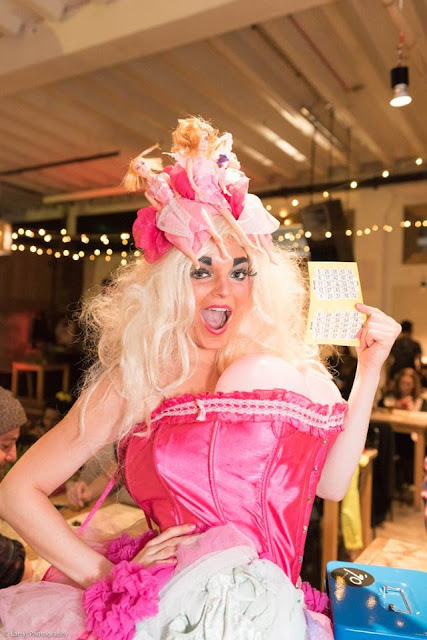 By exaggerating  the character I realised that what is normally considered as "hot", "sexy" as a man fantasy become repulsive, monstrous and grotesque. 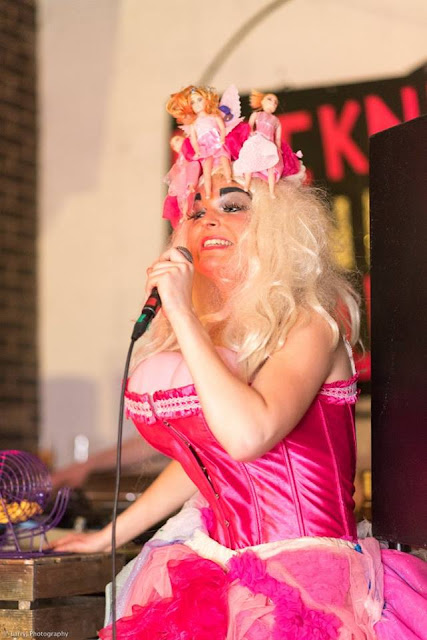 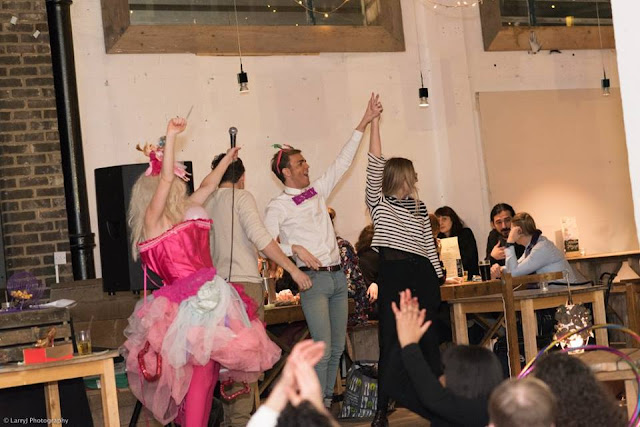 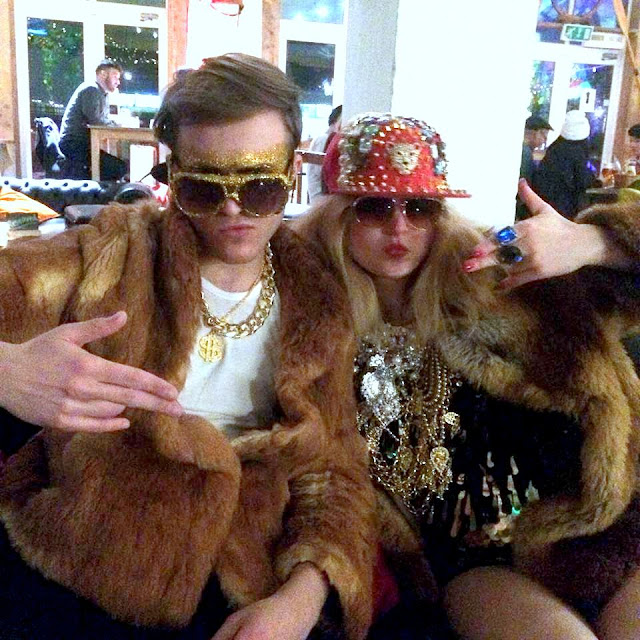 US Gangsta bingo, using bling bling rap US code & aesthetic embodying Tupac or 50 cent,  the twerking competition was quite memorable! when the attitude come with the costume! 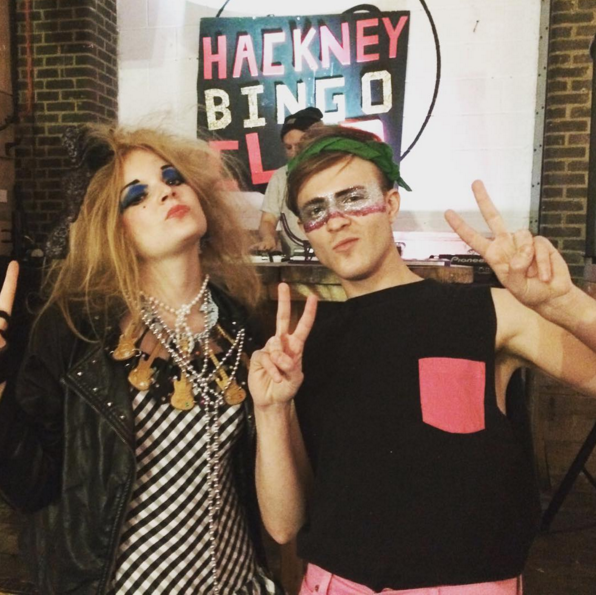 Nostalgic years bingo, for the first round we dressed 80s style, Madonna and Freddie Mercury and we changed for the 90s into grungy Curt Cobain inspired icons! 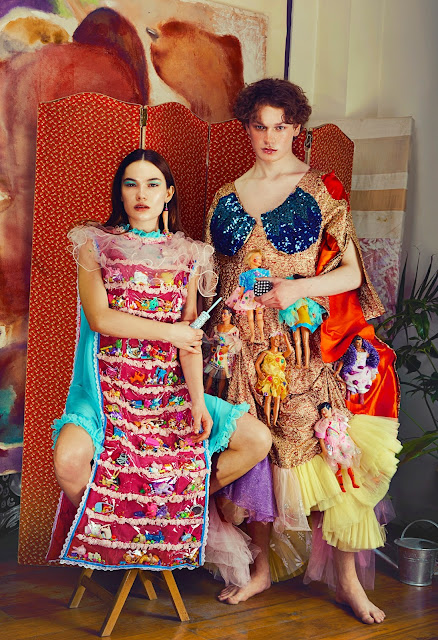 This is a collaborative project with  Yildiz Dogamemisoglu, graphic designer, interactive installation  student at Central Saint Martins.   She sculpted and casted mundane objects & tools  and covered them with crystals. 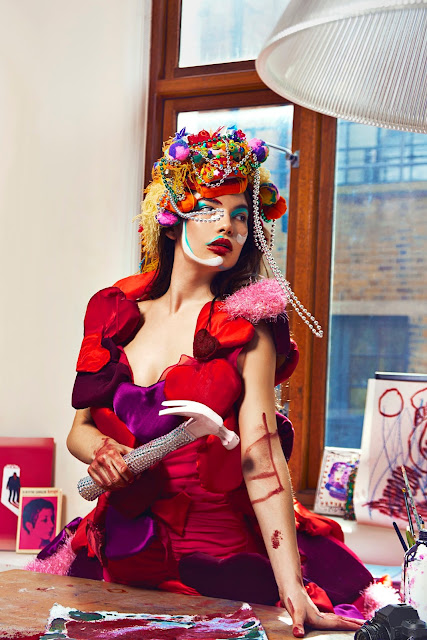 The concept behind this was creating an anti-extravagance campaign and celebrate kitsch. I felt my costume would fit well with her designs.  The new B&Q campaign?  I also like the fact men models are wearing my dress that celebrate gender fluidity into clothing. 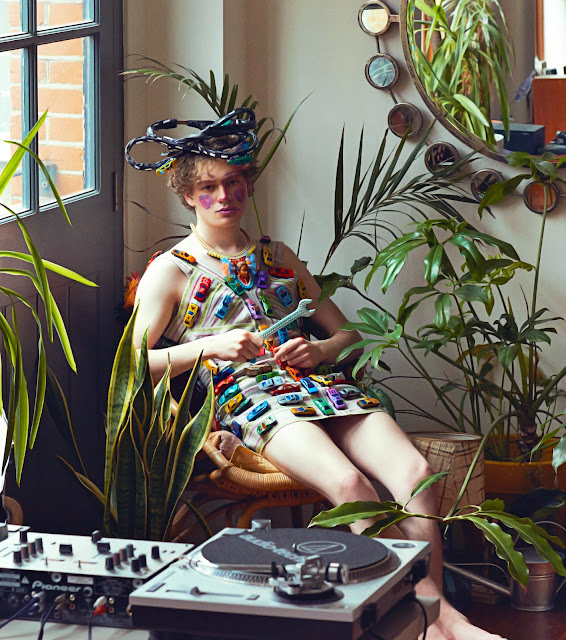 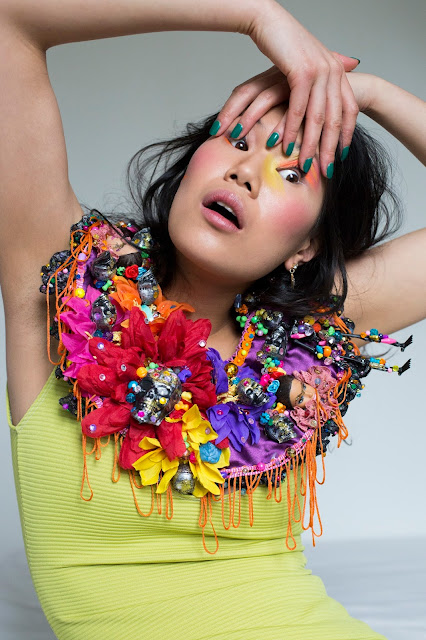 Beautiful shoot styled by Ane Kruse with some of my bespoke neckpieces, revealing the mischievous  and regressive child within the model and adding some playfulness and colour to the beauty shoot! 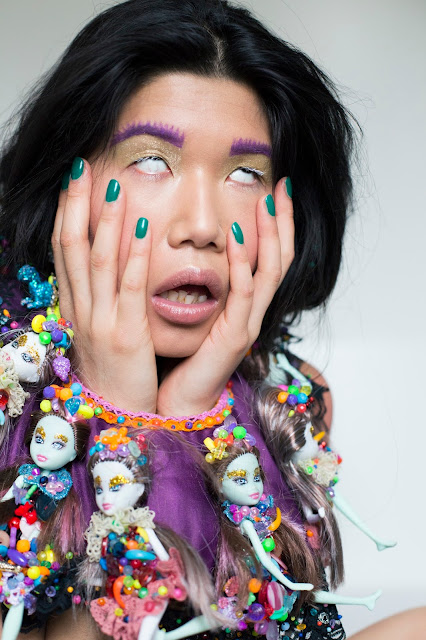 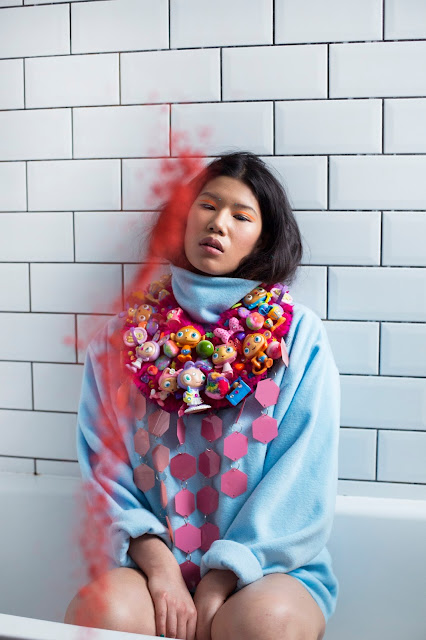 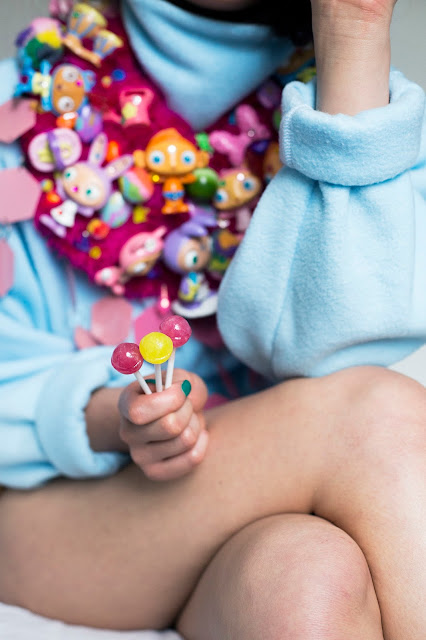 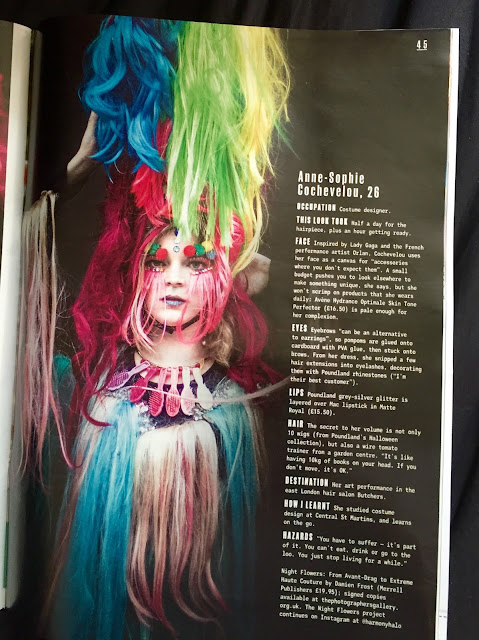 When I came back to London, had the surprise to find a hard copy of Times style magazine with a full page with my picture from Damien Frost, next to a fabulous costume designer Samanfah Wilson. 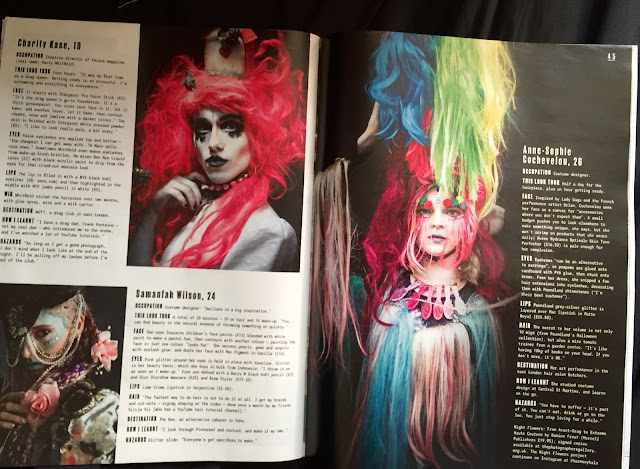 The journalist that interviewed me was surprised I was getting all my make up from pound land and not luxury brands brands! Get stuff for a pound and make it look like a million!
Publié par Anne sophie cochevelou à 09:02