"The Isabelle Gounod Gallery is pleased to present the first exhibition of Anne-Sophie Cochevelou. French artist based in London, Anne-Sophie Cochevelou offers a reflection on the cultural appropriation within an “unplanned obsolescence” - through a maximalism that is dear to her, thus celebrating the richness and variety of different cultures through reclaimed material. 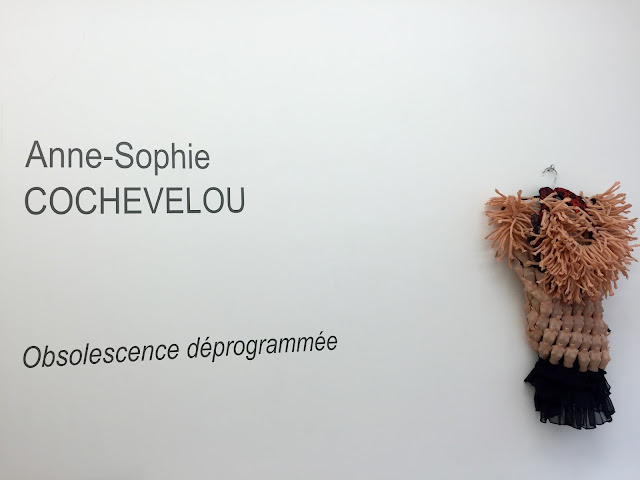 As a visual artist and performer she develops an everyday aesthetics of the ornament, of the accumulation that gives shape to exuberant and improbable creations, which explore the concept of wearable art and uphold a “hyper-femininity feminism”.

video of the opening and "gender fluidity performance" with Simon Dodi, filmed by Anthony Lycett

Following Barthes's death of the author theory, when people ask "what does this pieces represents?' there is no right or wrong interpretations.


Sometimes the essence come before the meaning, sometimes  the other way round. After I created the piece, they belong to the interpretation of the audience, In fact fact, they reflect there preoccupations , their worries, their personality… meaning is always circulating! 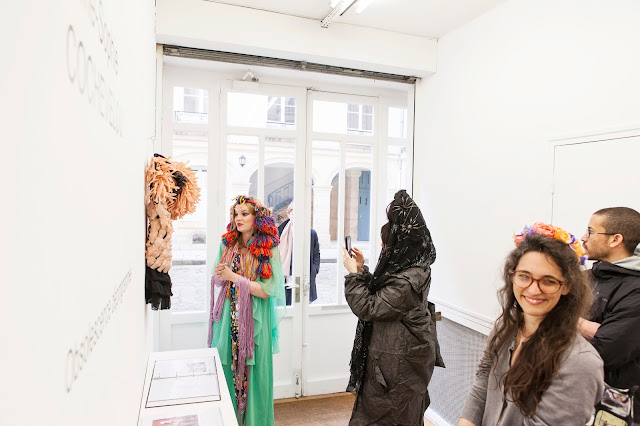 The legendary Diane Pernet made me honour to make it to the opening and I took her on a private tour! 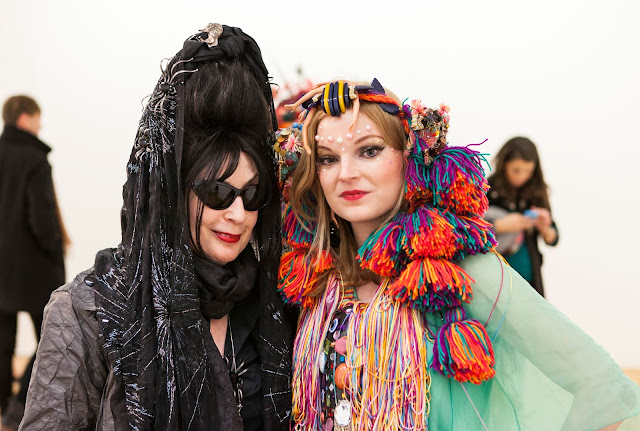 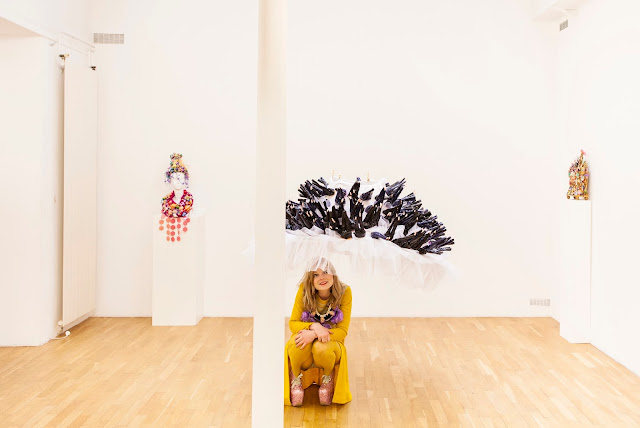 This pieces explore the issue of feminism and the status of woman's body in a postmodern society through an interactive costume-based performance.
The performance questions feminism paradoxes, taking more side of an "hyperfeminization" of the woman body, strong and sensual.


In a precious costume, woman's body is celebrated and sacralised but paradoxically enough, reified and hampered.  It is endangered by the interaction with the audience if they try to transgress the limits dictated by the performance.
It is this mere paradox of strength and vulnerability, of circulation of meaning between textile material and organic one that woman's body become an object of art.

The neckpieces "the four ages of the woman" is composed of barbies and dolls standing for the different stages of a woman's life (baby, little girl, woman and skeleton symbolising death). The middle age woman's face has been replaced by a lotus flower as a symbol of femininity, a reference to Dali's flower lady. It is also a reference to the poetry of Ronsard "Mignonne allons void si la rose" recalling that woman's beauty fades like a flower, linking classical tradition of "memento mori" to surrealistic image of sensuality.

The fact that the crinoline is suspended in the space with nylon thread divert the primary function the dress designed to hide women's legs. The audience can fulfil their fantasy and watch under girls' skirts!


The headpiece is made out of skulls joining in the tradition of moment mori and inspired by religious iconography and a syncretic pop culture like when Lady Gaga wear a "bling" crown o thorns in her videoclip "Judas" or haute couture madonnas of Jean Paul Gauthier.
This kimono lies between tradition and modernity.  It is a traditional japanese Kimono made with silk painted with flowers and exotic birds. Re-embroidered and re-worked with fabrics found in flea markets and moshi monsters; emblem of contemporary kawaii japanese manga culture, it takes a new dimension at the same time tribal and playful typical of "lolcore" trend.

I actually had some Japanese people in the audience who said to me "that is quite rebel"!

I like to work like an hermit crab that appropriate to himself empty shells.  I like to work from an initial  design. I feel there is always a reason for the original design, that I have to respect and not to deny or  hide but reveal its potentiality, embroidering a pattern, underlining a seam… For the kimono I liked to work on the
contrast between the 3D and 2D that echoes each other (for example stitching fake leather golden flowers next to painted ones) 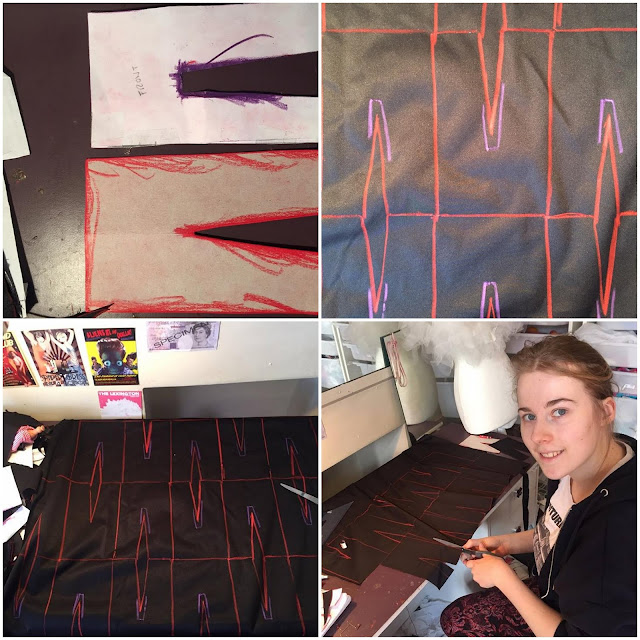 I really start on my exhibition in january 2016. Lot of pieces actually exited I kept embellishing, adorning, adding a pearls.  It is really hard for me to consider a piece as finished, my temptation is always to had a bead here, a barbie head there...and the best way to get rid of temptation is to yield to it...this means even the day before I had to pack up for Paris I was examining each piece under every angles trying to see what I could add... 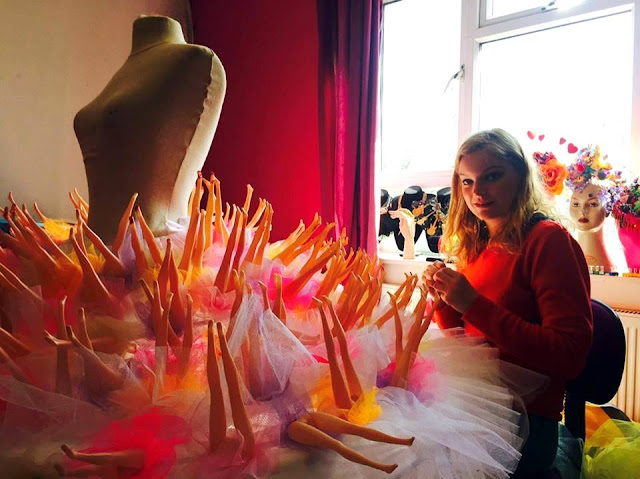 Whereas in painting, one brush too much could ruin the all paining, I feel the pieces are getting better in the accumulation, paradoxically finding their balance in the overload.
For the kimono, I worked on it for about a year, when I feel like it, I put on my mannequin and work a bit on it, embellish a sleeve, add a ribbon…. 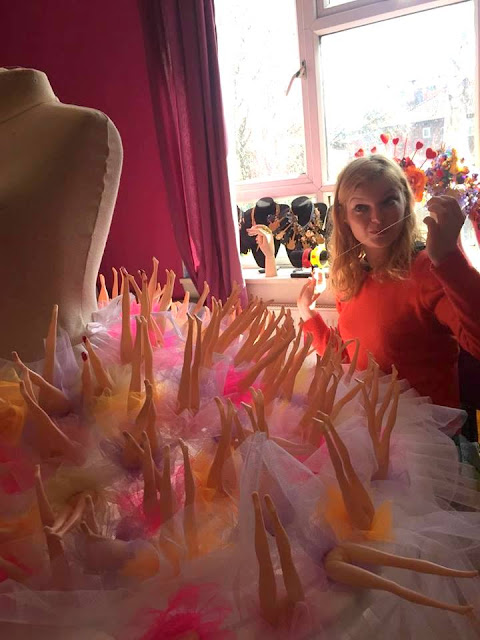 I am never able to answer the question "how long did it took you?"  I don't know, enter in another temporality where time stretches, don't work in continue. 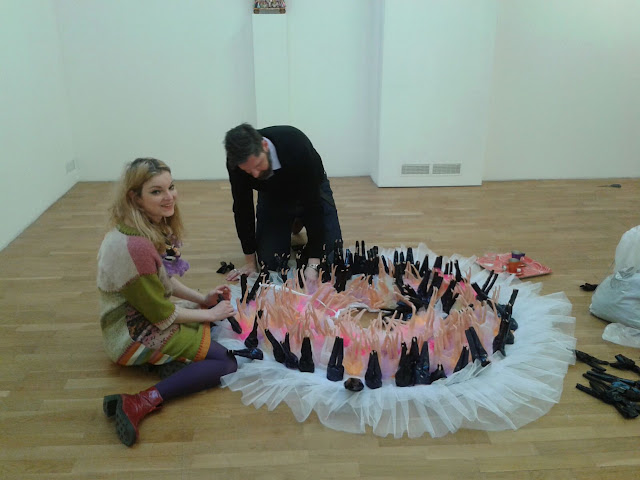 J -2 : setting up in the gallery, took us few hours to put the 200 trousers on the skirts (that audience took few minutes to take off) 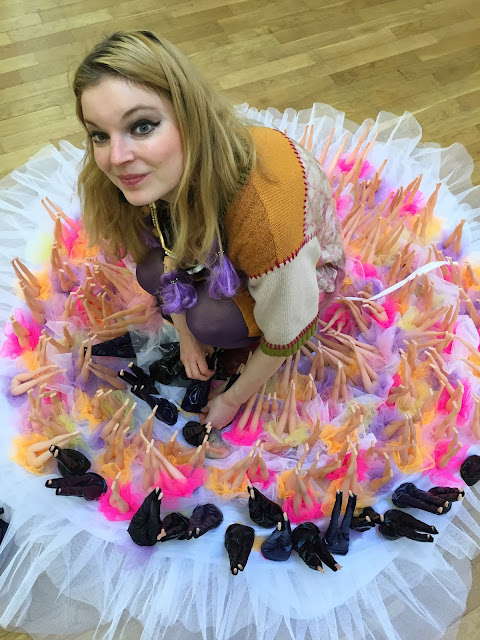 This kawaii neckpiece "cute" in japanese defines a sweet aesthetic of  pastel colours. It allows the adult to find again the wonderful innocence of childhood in a society where the entrance in professional world is always more and more harder.


The kawaii sensitivity, merely aesthetic, non committed and depoliticised relies a image of women of weakness and devoid of responsibilities.  Presented as a breastplate that could refer to a warrior jerkin.  This piece question the ambivalent status of this kawaii amazon , between strength and vulnerability.
This is a clock without dial that I found in the street.
I replaced the missing  clock dial by a baby doll  face  that I painted and adorned with hand-stitched beads.
On this kitsch rococo style clock, all the heads of golden figurines have been chopped so I replaced them by mermaids and fairies one.
In heaven, time has stopped on tea time and  Ursuala/shiva dressed a drag queen is the goddess of ice-cream.


The Death is welcoming the dead with her two Shrek bodyguards among the pantheon of Disney celebrities dancing on the "Dance Macabre" of Camille Saint Saëns for a psychedelic Sabbath in an apocalyptical and psychedelic  iconoclast & syncretic vision inspired by Bosh painting.
dancing shoes embellished with beads and found fabric,


Placed at the entrance of the gallery, they establish the new conventions of the surrealistic world you are about to enter abolishing scientific laws like gravity or blurring lines between perception of horizontal and vertical, creating a suspension of disbelief pact.

This dress is made from scraps of multicolours leather reclaimed from the fashion designer Martina Spetlova" on the theme of "studio's discarded" (I already made a dress about unwanted paintings from an painter studio, see article here) because in nature, nothing get lost, and everything is created by transformation.  Original shapes from the scars haven't been redrawn or cut again. They contains in hollow, in negative the shape of the patterns and designs they contributed.  Reclaimed, this pieces of leathers evaluated unusable by their size or shape, despite their rare and noble material, become part of parcel of a new and original piece of work. It is in their reject and uselessness that dwells their fragile beauty.
The scraps of leather on the ground reveal the creative process based on the instinctive assemblage of shapes and colours, playing on the unfinished character of a piece always in motion. 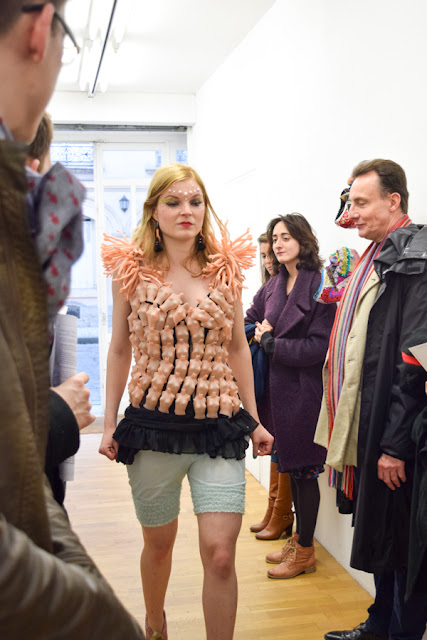 The performance was like a ritual. I entered in my busts-bustiers (made as a mise-en-abyme of barbies's torso) and with my vintage knickers.


Then the skirts goes down from my neck level to my wait level, my performance partner Simon Dodi from Luxuriouxsnacks attach the crinoline.  Then he ceremonially add the arms neckpiece and the dolls head headpieces (each part of the body corresponds to that barbie part). Then he initiates the ritual by taking of a trousers and adding the shoes and invite the audience to do the same.  I was quite surprise that the audience has been really receptive and in a twinkle of an eyes all the trousers are off! 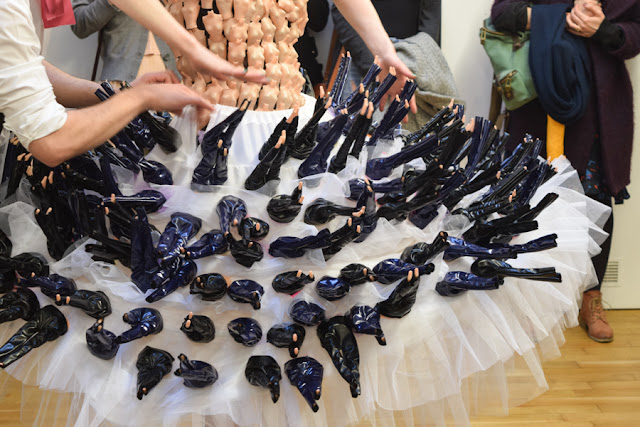 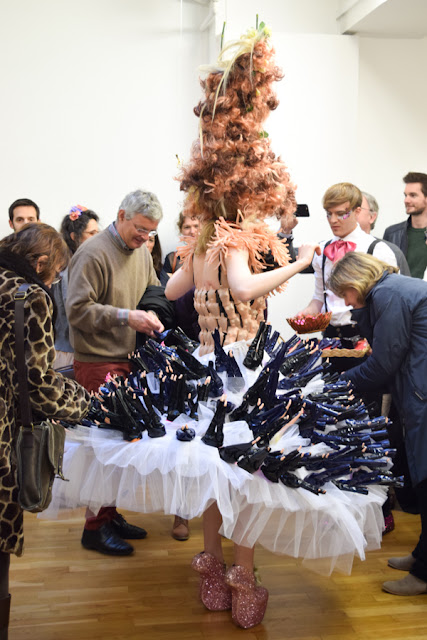 By deconstructing the image of barbie dolls as an icon of the feminine ideal (often considered as an anti-feminism model) On the crinoline is sewn 200 pairs of legs covered by a navy blue or black trousers that the audience can take off in order the reveal the bare legs and the skirts blossoming as a flower.  Then, the audience can adorn the feet with pink shoes adding the final colour touch. 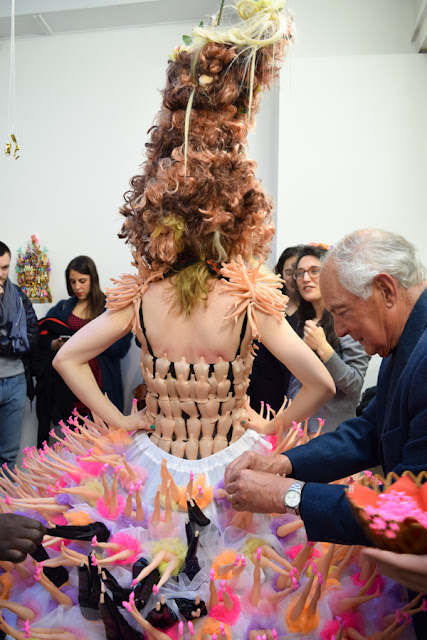 The performance plays on the ambiguities of gender based on established cultural and social clothing's conventions. It is like a strip tease where only the legs of the barbies are exposed and the body of the performer remains safe playing on this in-between, between unveiling and preservation. 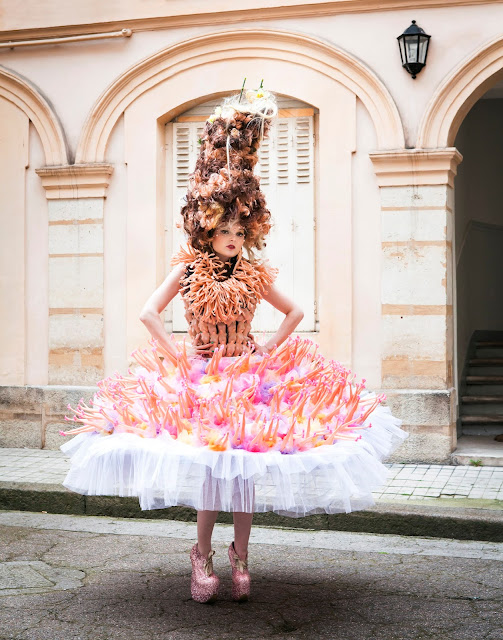 End of the performance in Isabelle Gounod gallery courtyard after the transformation, show by Natacha Maro, picture by Anthony Lycett.