"Brighton Fashion Week offers a fresh approach to promote sustainability within the fashion industry. Our aim is to encourage as many excellent quality innovative sustainable fashion brands to showcase at the event as possible and showcase the very best in sustainable fashion. We also work with new designers at the start of their careers to adopt ethical practices in their work www.brightonfashionweek.com/

I took part in the Brighton Fashion week showreel competition, the brief was "from waste to beauty" which is my motto regarding fashion. For me creativity dwell in the ability of turning a 1£ material into something that look like a million!

The only golden rule was  that all the materials you use must be 100% recycled, pre-loved, or marked for disposal.

So I submitted my piece "glorious junk" This kimono is designed between tradition and modernity.  It is a traditional silk japanese fabric  with printed flowers and birds that I embroidered over with beads.  But it also refer to the kawaii and hyper japan of manga words with  hand-stitched moshi monsters.   I styled it with my colourful rubber dress that I worn for the Vaslpar advert.
This dress is made out of thousands of piece of coloured rubber. The fact that is not fabric make an amazing motion while twirling.

This pagan Goddess of glorious junk look  is the quintessence of the different ways to work with upcycling materials: from  recycled waste put together to customised second hand pieces including  donations of reclaimed pre-loved objects by friends, combining a japanese kimono between tradition and modernity and a rubber dress for a postmodern tribal look.

Then the  kimono is designed between tradition and modernity.  It is a traditional silk japanese fabric found in a flea market  that I redesigned with a new cut, and adorned with embroidered flowers and birds  that I embroidered over with beads themselves claimed back from junk jewels. I created a whole stole with hand stitched  plastic moshi monsters toys figurines found in the car boots sale area of Bricklane on the Sunday market adding a kawaii,  hyper japan manga dimension to the traditional garment.   Even the thread have been given to me from a friend having to move from London. 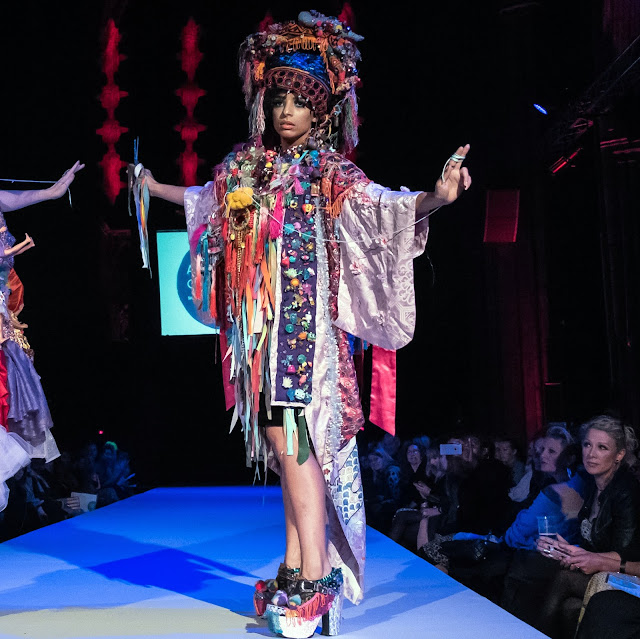 For a lot of pieces,  I don't have a  preexisting design in mind.  Everything come from necessity, I start from what i had and what i find. Half my time is spent obsessively trawling for junk, and the other half, obsessively putting it all together. I feel like an hermit crab who doesn't build his shell from scratch but take over abandoned one and make it his own by adapting it.

The hyper-japan kawai lolcore necklace is made out with moshi monsters of the sunday market and the headpiece is a covered helmet and a broken football metallic part use as the structure covered by reclaimed fabric and and Indian mobile  found at Brick Lane market.

t has been a very long day as we needed to be at the All saint Church for 9am so leaving at 6am from London (knowing that the night before I was performing for the birthday of an advertising agency), moving from  fittings to rehearsals,  judging, interview, hair and make up sessions, waiting…

Luckily, my two models  Veronica Jean Trickett and Grace Elizabeth Kemp were amazing, also being performer they immediately got the narrative and put all their energy in the rehearsal. 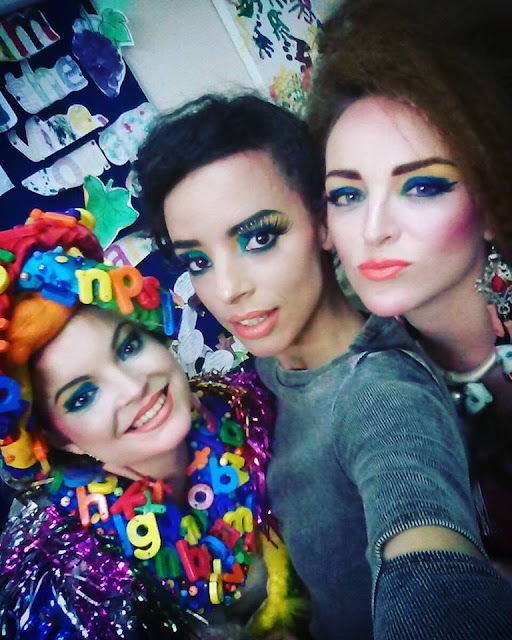 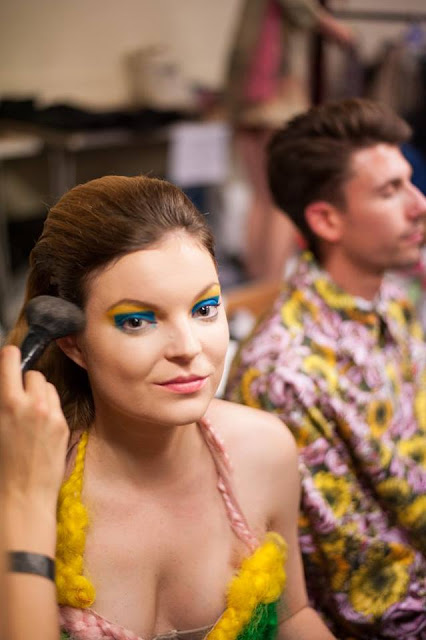 My boyfriend was also very helpful.  In the performance the visor were a key props but I just had time to grab my kitchen scissors so he spent our to customise them with glitters, carrying them everywhere to allow them to dry.

But it also refers to the story of fashion and the process of design where the designer create the garment, unroll the thread in order to stitch, and cut in order to finish the garment. 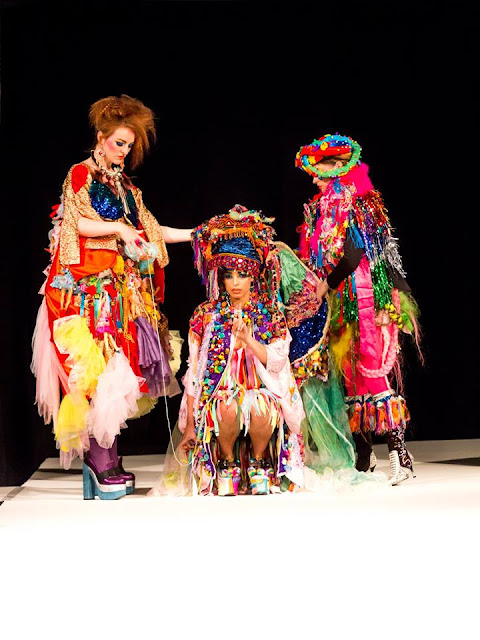 So first, the three performers arrive on stage, the main one is hidden under a tent I created from a mosquito net and covered with beads and scraps of fabrics.  Then the main performer is revealed, as a designer I had some element of the costume directly on her to make the garment complete (I find important that the process of the dressing up is not hidden in a backstage but choreographed and part of the performance itself). 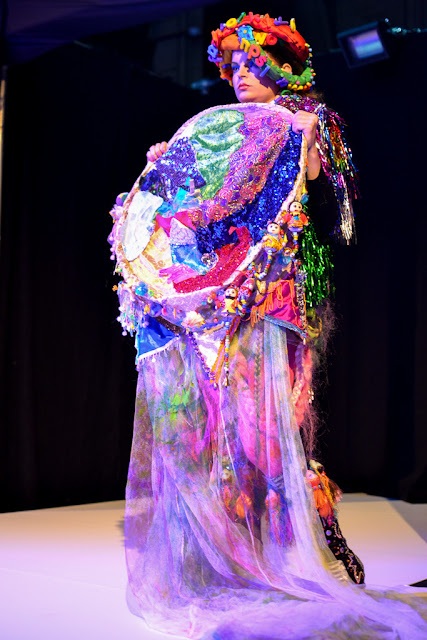 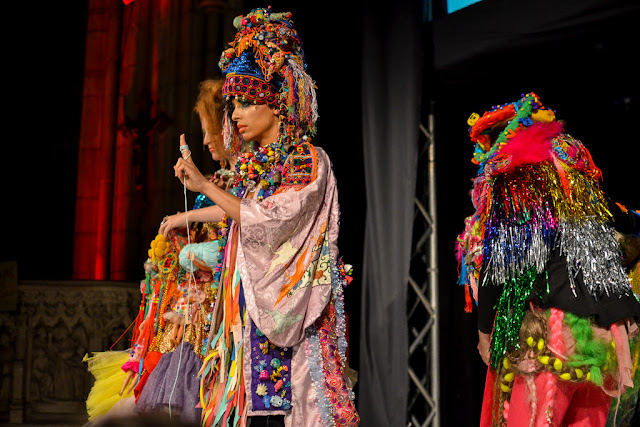 Then the well named Grace walked majestically unwinding a ball of wood and tying the thread around the finger of the front row involving physically the audience that create the zigzag in an interactive way. She was wearing my Grayson Perry dress exploring cross-dressing  made with Vanessa Murrel for last year "Loudest Whisper" exhibition. (see the article) I didn't have the occasion to showcase it again so far.


Then, Veronica moved forward to cut the thread in order to make her way to the end of the catwalk, destroying the ephemeral art installation.

The performance provoked a vivid reaction from the audience, thunderous applause and crackling of photographers' flashes.

In the crowd my boyfriend could hear to drag queen talking together
-I love the hat
-It is a turban darling
and my boyfriend who know all the secret of my creation thinking in his head "no it is a cricket helmet". 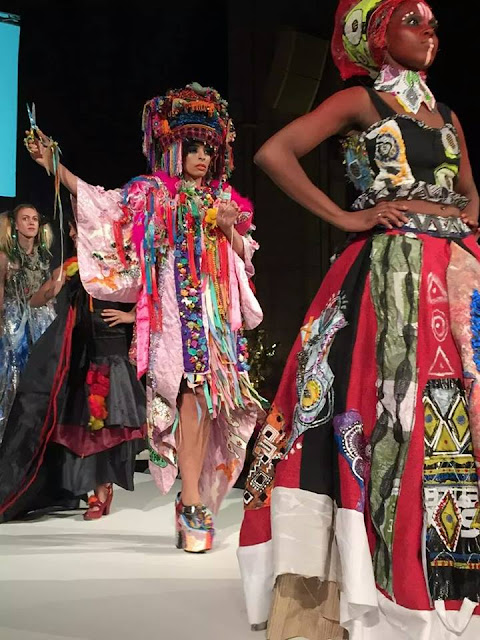 some press link about my performance at the Brighton fashion week: 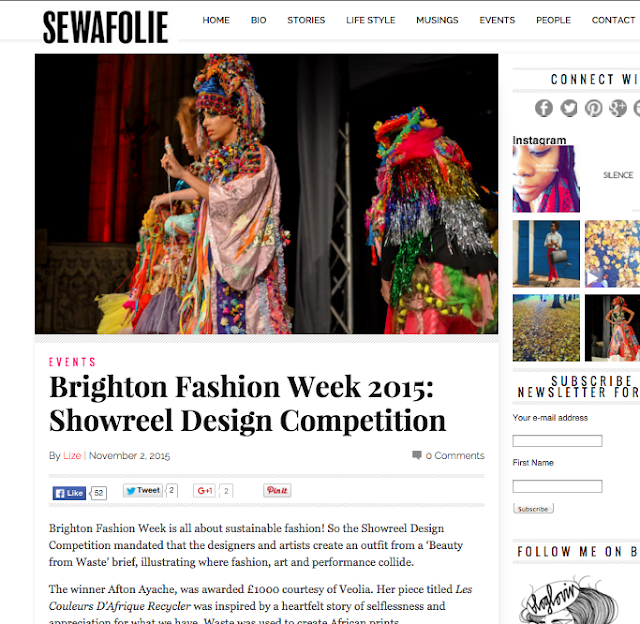 It seem that my designs were visually striking as they are making a lot of front cover of article about Brighton fashion week! article here 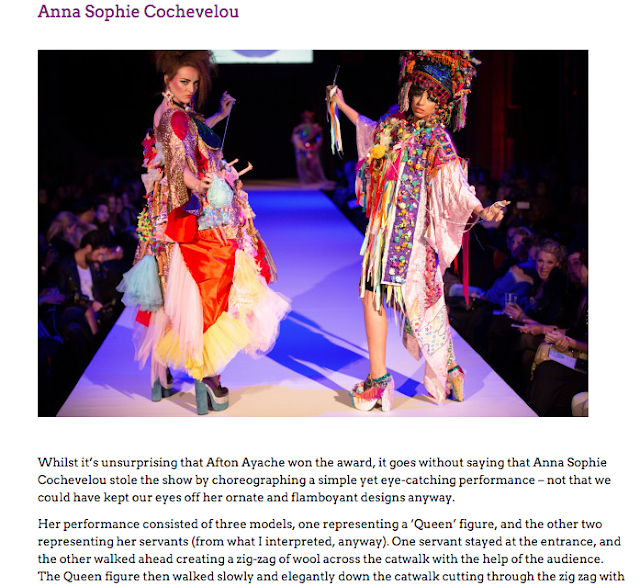 Even if they spelt my name wrong and make a funny interpretation of my performance they are still nominating me as one of the 10 emerging designer to watch out after Brighton Fashion week! full article here