In the frame of our project "into the wild" in collaboration with Anthony Lycett we did a road trip accros UK to the Ile of Sky in Scotland.

Nothing happened as planned, because I just come back to a festival in Iron Bridges, and we had to go at 5am in the morning so I didn't have time to fix my two costumes.  When we start shooting in the purple heathers in the Yorkshire Moor (near Whitby)   the wind was so strong that it blowed away the costume, completely destroying it, turning the "Bateau Ivre" dress (The drunken Boat) turned into the Shipwrecked boat! But as we never gave up we decided to shoot the paint dress instead but by the time we got ready the light was nearly gone which givse this post-apocalyptic atmosphere to the costume, life on mars if it was a purple planet.

I made this dress from the abstract painter John Baldwin's canvas he gave me in create outfits. I created a first outfit (here on my blog) as a smaller experimental version. This time I used my favourite shape,  bustier and crinoline. The top and the skirt are constituted of several panel of different painting illustrating the different styles and use of colours & texture of the painter.


I can say I am the most lucky designer as I have the honour to work with the best print in the world: some work of art.  While I was building the pattern I was very shy about cutting the different pieces, you can't afford to make mistake as if you cut to much of the work of art, you won't be given another one. It feel nearly as a profanation to cut in a middle of a painting that should be hang on a wall. 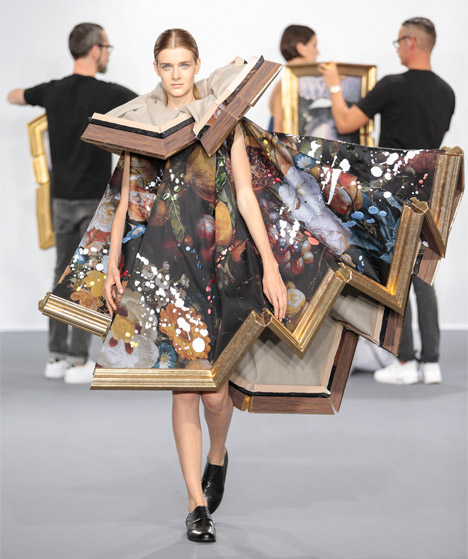 But for me art should always be wearable as something magical is produced but the contact between the piece of art and the energy and the body that suddenly take another dimension.
I was inspired by Victor & Rolf fashion show who transformed broken picture frames filled with fabric into haute-couture gowns  by taking them off a wall and draping them over models. 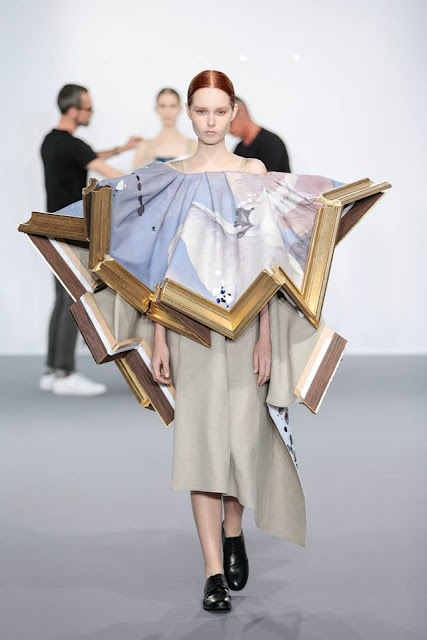 They said about their collection
"Art comes to life in a gallery of surreal proportions. A dress transforms into an artwork, back into a dress and into an artwork again. Poetry becomes reality, morphing back into fantasy."

The day after, we drove to Scotland, after a 12h trip we arrived to a magical and remote area. I took half a day in the Artist Katie Tunn living room to fix the dress and give it back its original shape, I felt I had an art residency in the Isle of Sky! But when we arrived to the location it was raining and full of midges.  We waited in the car, half an hour, an hour, an hour and a half… 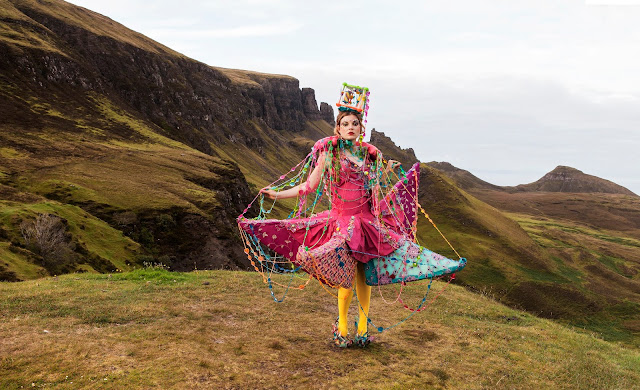 We could only do this picture this day as we had to go back to London the day after and you don't do a 14h drive to come back for nothing.  We decided to get some snack at he closest shop (25min drive) and we came back the sun was coming out as if God was opening the sky! But when we arrive to the highly coveted spot, another photographer had set up his tripod saying he was waiting for the light for three hours (which was a lie as we were there before)  Anthony tried to negotiate and compromise so we set up next to him. When you think you overcome all the trials, there is always something more.  While we were shooting a couple of German came around and started taking picture of the costume and brought with us a swarm of midges.  Even  with the repellant, when I got change, they bit me all over my tommy and I scratched myself for more than a week. Now I can add another difficulty to the list: Rain, Wind, Cloud, Cold, Tiredness and MIDGES. But when you see the picture I think you can say "No pain, no gain" 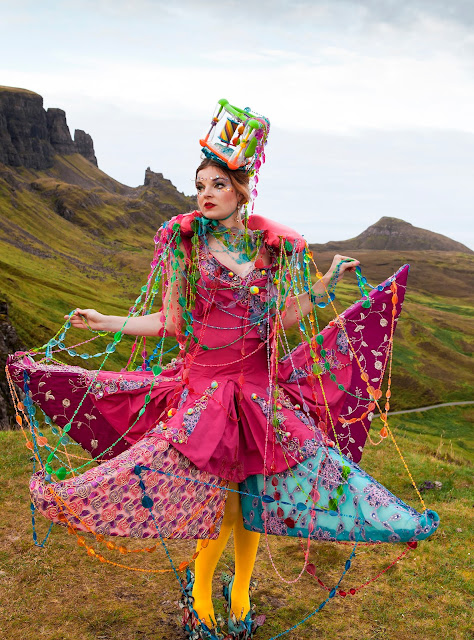 The idea for this dress came from a colourful beads curtain my boyfriend had in his house. For month I asked him if I could have it, but he said his flatmate will probably be not happy to see it disappear.  But one day, he came to my home with the box full of the beads and I was so happy! I made the chandelier dress.  I bought 6 pieces of foam that I cut like big triangle sandwiches and I covered up with sari and oriental fabrics to create a kind of geometrical octopus shape supported by the hanging beads like jewels cordages. 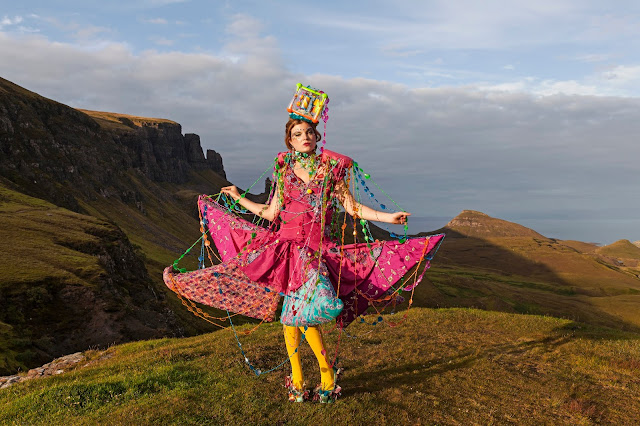 I spent my evenings embroidering the dress with beaded flowers, pompoms and pearls.

When I was in Brittany I found this box full of letter fridge magnet in my little twins cousins toys.  Colourful letter fridge magnet are part of our collective unconscious.  As a child we all learn to read with them or living message in the kitchen.  In my work, I like object that are a common reference and arouse nostalgia.  So I decided to steal theses letter in order to make a necklace and a headpiece.  This "AZERTYUIOPQSDFGHJKLMWXCVBN" necklace is like a psychedelic calligramme. I didn't try to form words. Like in abstract art the meaning spring from the combination of shape and colours.  In the wake of Cratylism theory, I was more interested into the materiality of the letter rather than their literary meaning.
I made this scuba diving necklace for Sue Kreitzman.  The base is a bathroom mat I loved the plastic structure and the transparent bubble.  the little scuba divers are discover a magical under the sea world populated with sparkly fishes and mermaids!

To finish on a high note, on of my favourite picture of someone wearing my creation. Anthony's Mum wearing my little pony head piece.  When the magic of childhood meets the beauty of old age. When photography can rewrite a forgotten story.
Publié par Anne sophie cochevelou à 09:03