Opening Night of Loudest Whispers at the Saint Pancras gallery, 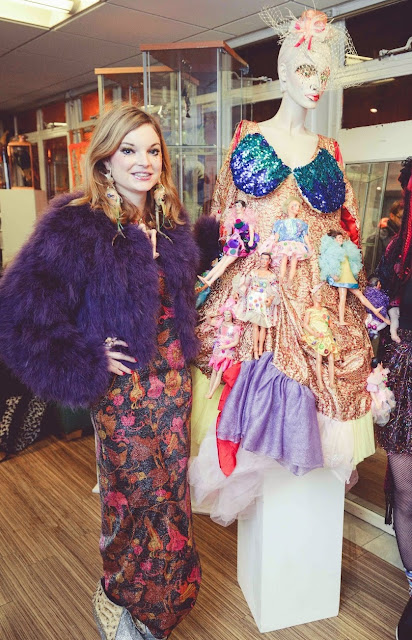 “This dress explore the concept of cross-dressing through the figure of the artist Grayson Perry the "tranny potter" appearing in his alter ego "Claire" a cross between Katie Boyle and Camilla Parker-Bowles.
"People say if you’re trying to access some kind of feminine, emotional experience, dressing up is a rather crude way of going about it,"
Diverting the function of an universally know icon, Ken, Barbie’s boyfriend by dressing it as a woman the piece question the gender identity through fashion and clothes and what is forbidden to on type of gender by a sexist society.
« I like to show people how manly I am. I am a man in a dress, and in a way it almost emphasises my masculinity."

Grayson Perry about his personal style and his vision of cross-dressing:

"Lot of trannies think they want to be women but I do worry that it feels like a logical explanation for a very illogical desire: "I want to wear women's clothes therefore I must be a woman in a man's body." It's much more subtle than that. If it makes a guy happy to chop his willy off then fine, but what's wrong with putting on dresses and still being a man?"

"The first time I cross-dressed in public I wore my mother’s houndstooth pleated skirt, a cream blouse, black patent court shoes, a beige raincoat and a headscarf. It was a hugely risky thing to do aged 15 in an Essex village but I remember feeling the excitement of potential disaster".

"I feel sexier when I’m dressed as a woman because you get attention and that makes you feel special."

"I always wear lots of colour. It’s the one thing I’ve got to differentiate myself from the man in the grey suit. He’s the enemy"

"Of course I worry about being fashionable…although I don't think about fashion so much, or trends, but I do like to wear a nice frock."

The self-referential  dress is at the same  time a dress representing different aspects of the artist but also a garment he could actually wear, taking elements of his personal style like big collar or childish tutu. The tapestry like pattern remind his own interest for tapestry as the one he created "the Vanity of small differences


Grayson Perry wears a lot of little girls accessories, ruffles, rustles and  puffed sleeves, that for him as the quintessence of femininity so we stitched looks of little girl tutu at the bottom of the dress. We created a drape that gives the impression that the dress lifts by itself to bow or maybe reveal her masculine attribute and create the surprise. 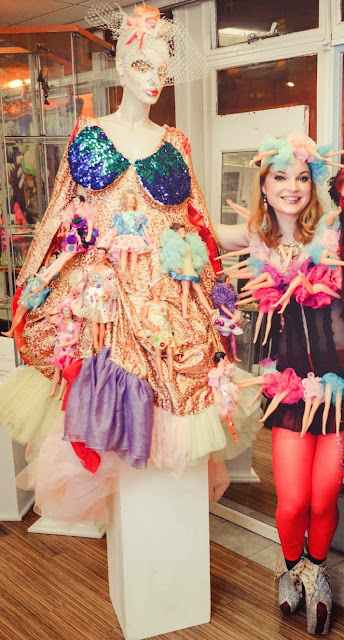 The base of the dress is actually a woman dress turned into man-shape one, the patch of orange and red fabric showing this cross dressing transformative process.
Ken dresses are all hand made, transformed from actual barbie dress, here again to show the process  going from a male to a female appearance, changing the cut and dimension, adding some piece of fabric to fit a masculine body.  It is a lot of embroidery work, hand stitching pearls, beads, sequins, rhinestones in order to create miniature haute couture dresses.  By doing this dresses you realise the power of scale on small dolls clothes. Fr example a colourful bead would be insignificant alone, but on a small dress, it takes another dimension, as it becomes a massive ornament. Proportionally a tiny bead becomes on a dress a giant brooch and modify the way of conceiving the design.

This pink Barbie dress explore the concept of "Pinkisation", the glorification of pink in postmodern society with the breaking wave of “cute”, kawaii” aesthetic on social media in response to the economical difficulties of our world.
This dress gather all the pink objects that make Barbie's pink world wear everything is pink from the radio to the cooking tools. It could appear like the dream dress of every little girl but also like an “over the top bimbo garment that express the difficulties of women to position themselves in society.
The Grayson Perry dress is staring at it with melancholy, seeing the paroxysmal ideal of what he could never be whereas his own beauty emerges from his  failures & contradictions. 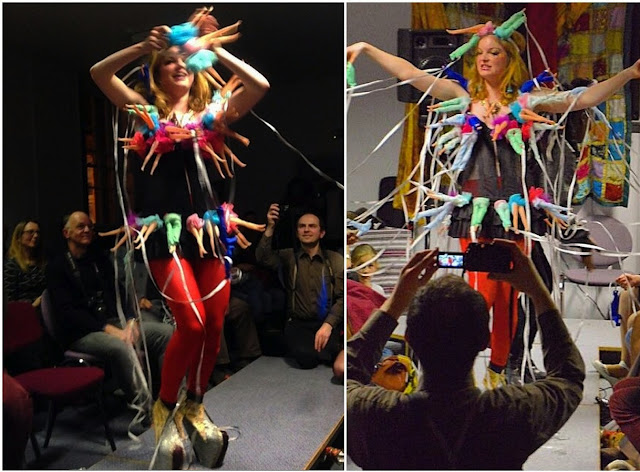 I created this performance especially for the Opening Light of Loudest Whisper exhibition. I stitched on a leotard lots of barbie legs (not the real one- imitations one you find in pound shop which are great to use on garment because they are very light).  I created little tutu to make some can can skirt. Then I sewed as many trousers as I had pair of legs (I felt like in a sweat shop making little trousers working in a production line). Then I attached some silver ribbons to all the trousers.  So basically when you put the trousers on the legs and the tutus inside the trousers, they look like men's legs. But I asked to the audience to pull out the strings  revealing the bare feminine legs and the tutu that bloomed  like a flower.  It was like a striptease where only the dolls get naked, playing on the ambiguity between gender identity through clothing.

Come and visit the exhibition, will be on till April!

This Kimono  made for Sue Kreitzman is a fresco about my personal story of feminism and attempts to feature  everything a modern woman need and aspire in her  personal, social,  spiritual and professional life. At the top you have spirituality that represents lots of religion &beliefs. You have the love and family section, the nature one, the art & passion one, the studies and work one and the travel one.  This work is about defining the status of women in post-modern society through objects she owns and uses.  It shows the versatile side of women that can be everything at the same time, a mother and an artist,  a housewife  and a business woman without being in the contradiction.
I used some shrink plastic to write some quotation from Feminism History like “A woman without a man is like a fish without a bicycle. Gloria Steinem” next to the figurine of the perfect brig room. or  “The thing women have yet to learn is nobody gives you power. You just take it. ”Roseanne Barr next to a blue hair muscly blue hair wonder woman.

At the beginning I wanted to make a big piece of necklace but the project became overwhelming and I got inspired by  Bayeux tapestry which depicts the events leading up to the Norman conquest of England or the digitally made tapestry of Grayson Perry evoking Britishness.  I was interested to use an Art that constructs a visual story  in order to  produce a "narrative garment" and  use the discrepancy between an ancestral technique and a modern subject. Tapestry is the art form of grand houses: depicting classical myths, historical and religious scenes and epic battles. I liked the idea of using this ancient allegorical art to elevate the story of Feminism.
The Kimono is between the tapestry and the fresco, a technique where the painter simultaneously  create lot of small "tableaux vivants"  because of the drying technique where he has to fix quickly  all the character sat the same time in the sealant before it dry.

This garment is the result of two months of collecting, sourcing, skimming  car boot sales and charity shop.  I like to work with miniature objects as they allow me to recreate a little microcosm.  I drilled whole with a mini drills in all the objects and hand-stitched them on the soft body of the barbie dolls and on the  tapestry fabric.  This project open my eyes on the magical effect of necessity. Theses things you found by chance, that you could have never found, that you would have never know they actually exist and suddenly become indispensable, and irreplaceable, the contingent becomes essential.  For example you could in your scavenger hunts you could never had found this pretty little plastic trumpet or this colourful electric guitar but when you got them you can't imagine the  complete piece without them, and because I am very messy I tend to mislead things and had to turn my room upside down in order to  find it before carrying on.


A friend asked me: could you make a Rhinoceros necklace, this is my favourite animal? (She actually has a whole collection of rhinoceros statuettes in her living-room).   Yes sure, just has to go to rhinoceros hunt! She wanted them to hang so I put a lot of chains and made the middle rhinoceros as a hunting trophy.

Made  this custom made piece for someone wanting to wear her Breyer horses from childhood around her neck! If you can't play with your toys anymore, wear them as a necklace! 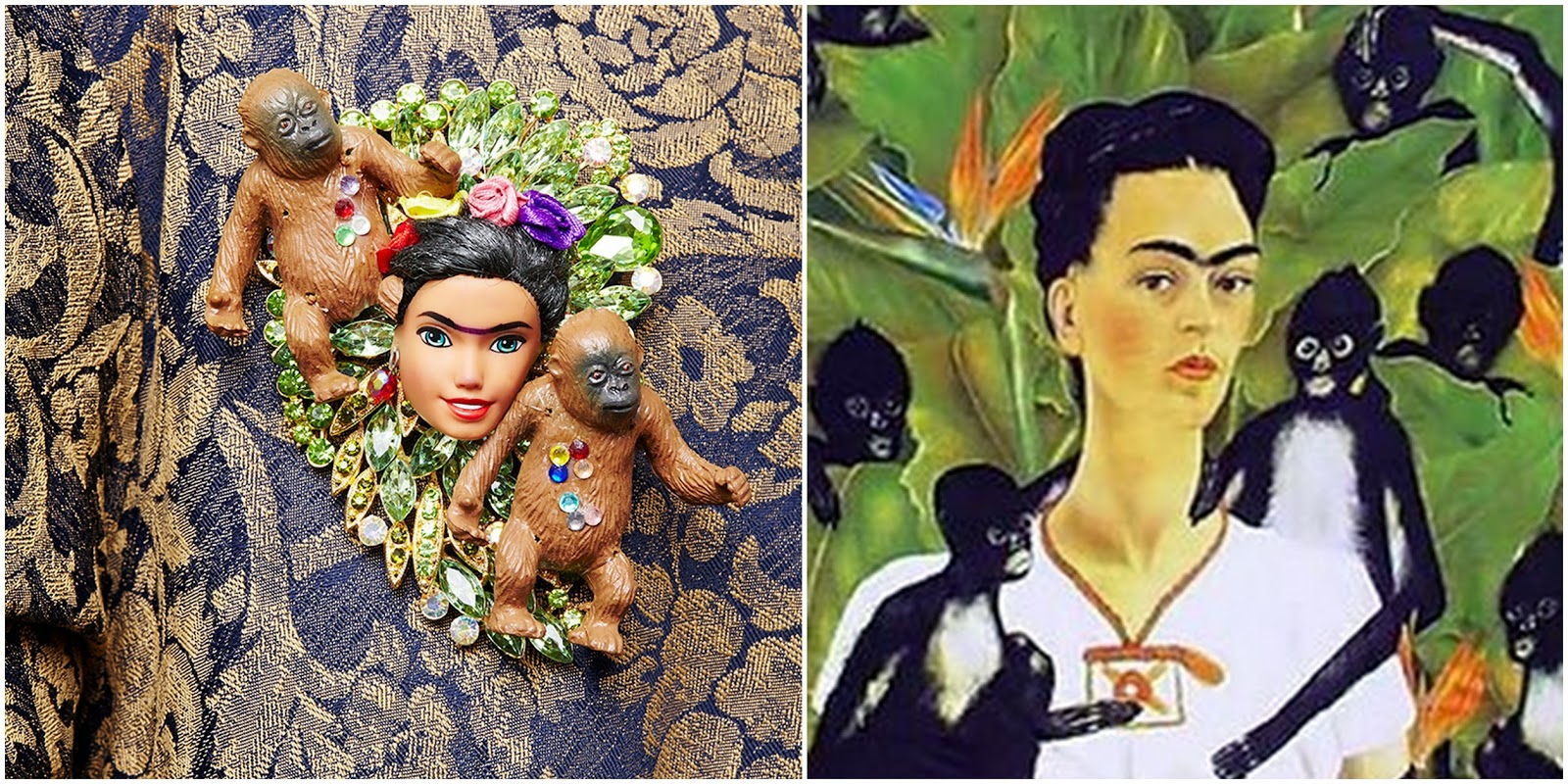 Custom made brooch inspired by Frida Kahlo Self Portrait with Monkeys, Bird of Paradise Flower, 1943, I like the idea to have a painting turned into jewellery and produce wearable art!

Last but not least, the beautiful and really Pink Sara in love with  wearing my "little barbie object necklace on her fabulous blog: 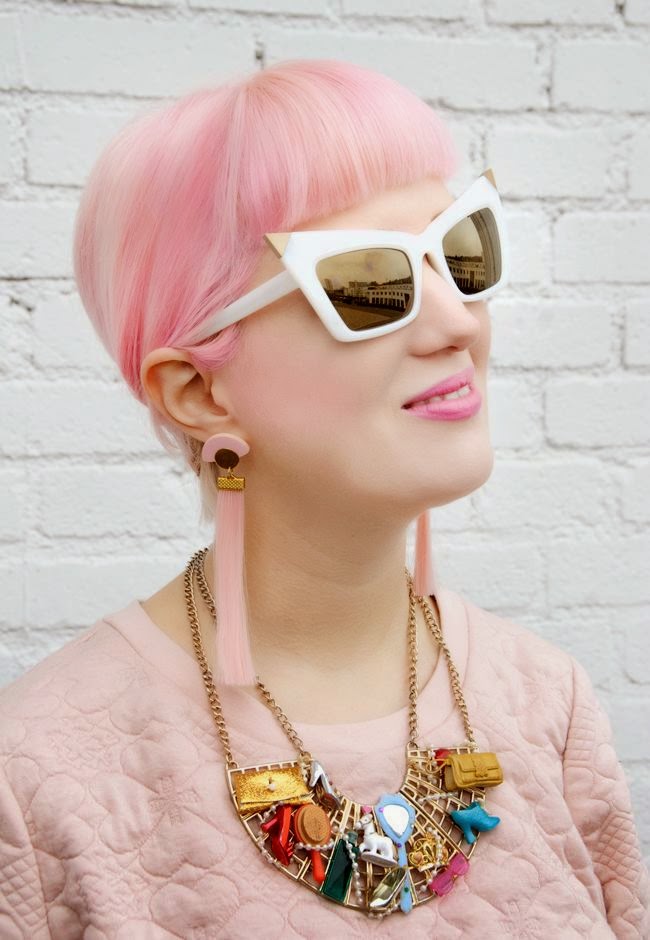 It is always amazing to see your creation coming to live an very inspiring people with unique style! 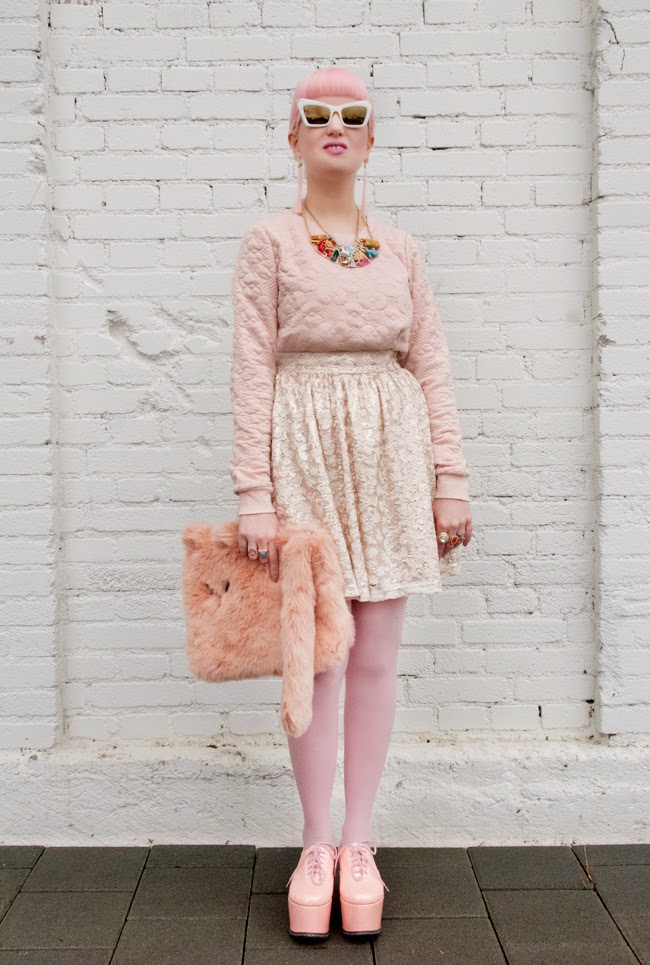