After making  a Josephine Baker necklace, I took on to the other Sue Kreitzman icon, the mythical Frida Kahlo. The woman that André Breton,  described Kahlo's art as a "ribbon around a bomb" inspired many artists by her paintings but also by her style. 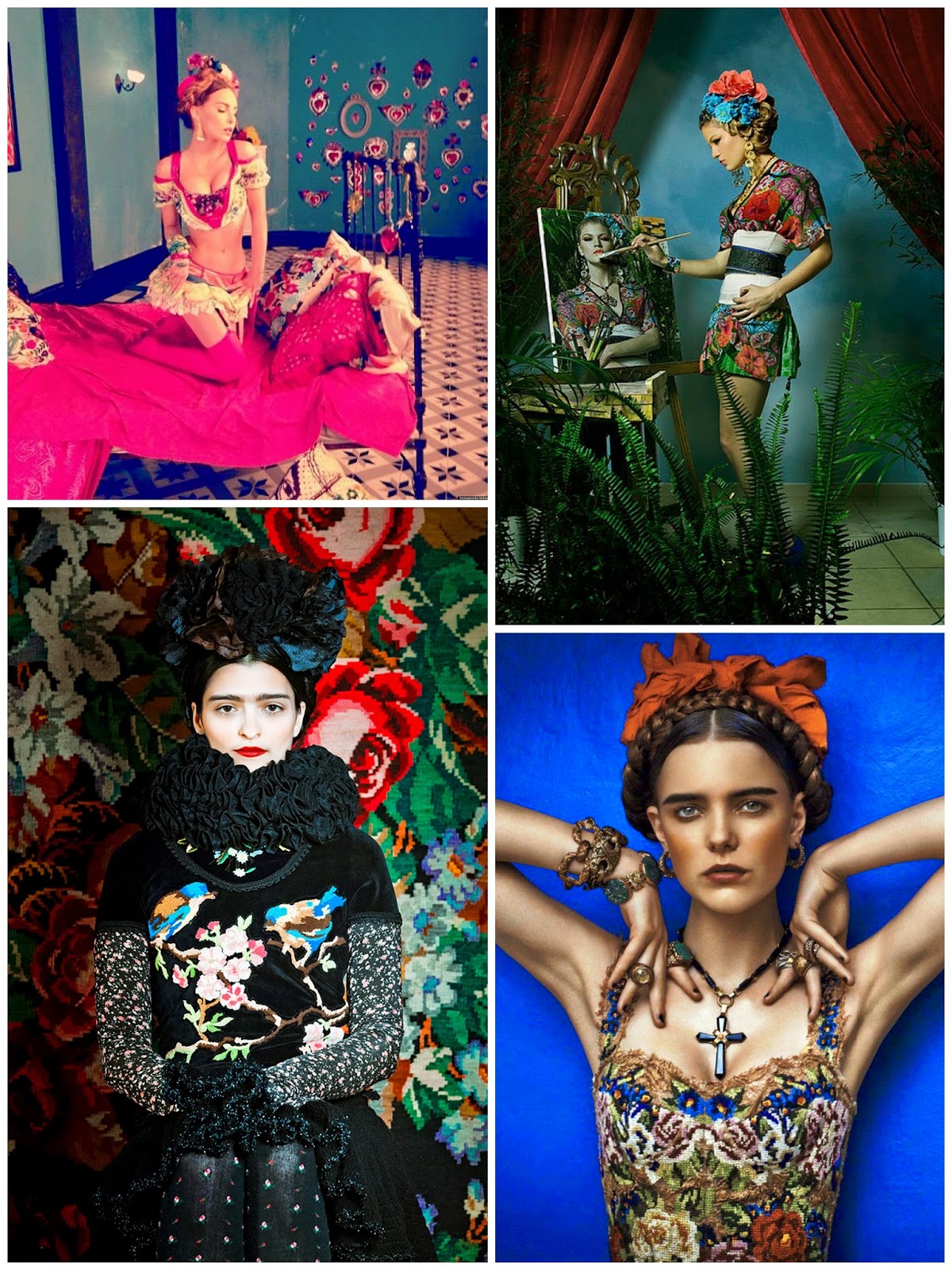 Recognisable  for her unique style inspired by the Mexican aesthetic of the Dia de los murtos she inspired  many fashion shoots. 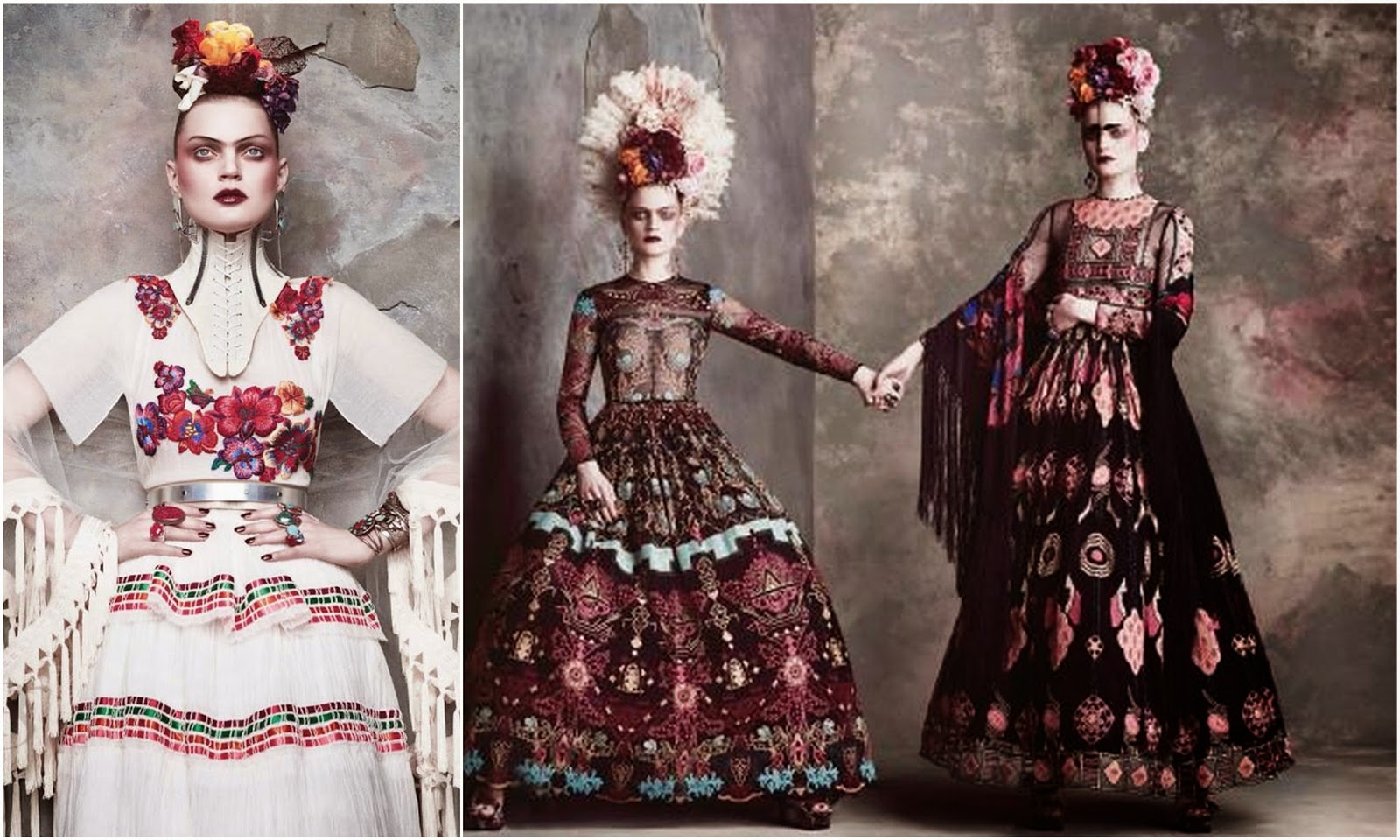 Like for the Josephine Baker necklace, I wanted to make something referencing Frida Kahlo in the content but also in the form.  Something in the style she could actually worn.


So I looked at a look of Frida Kahlo pictures and self-portrait to see what kind of jewels she was wearing.  I came up with that post-Aztec style , dies de los Muertos, lots of wood beads and colourful skulls.

It is not really hard to look like Frida Kahlo really  with her really distinctive & iconic  sign: mono brow and flowers in the hair.  To embody her on the necklace I just took some dark-hair barbie (jasmine & Pocahontas one) and I stitched some flowers in the hair made of ribbons.  Frida Kahlo mono-brow is as famous as Cleopatra nose or Cindy Crawford beauty spot. To "glamourise" her I decided to go for the rhinestone one gluing one by one the little rhinestones on the barbie's face.

Then I went to Sue's house, to give her necklace on a really rainy day (but is is always sunny and colourful inside). 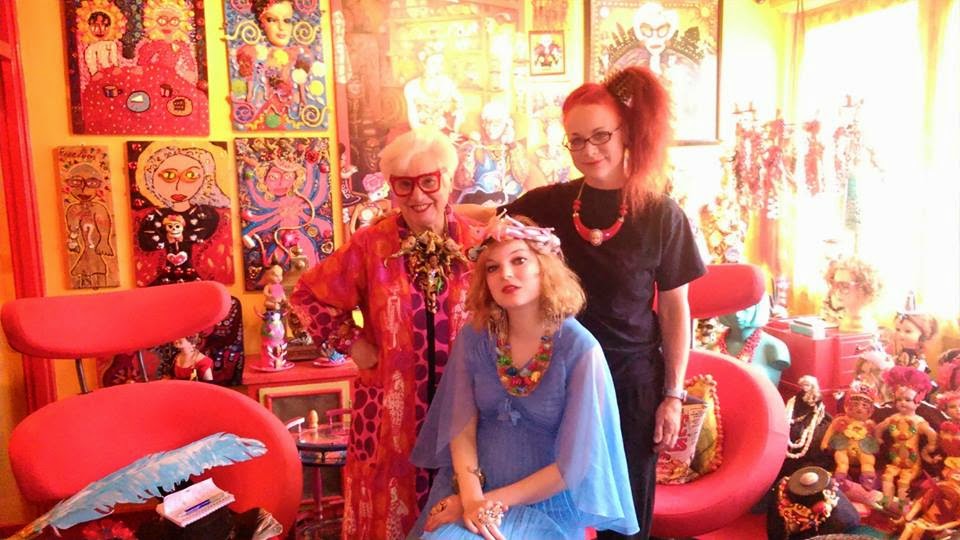 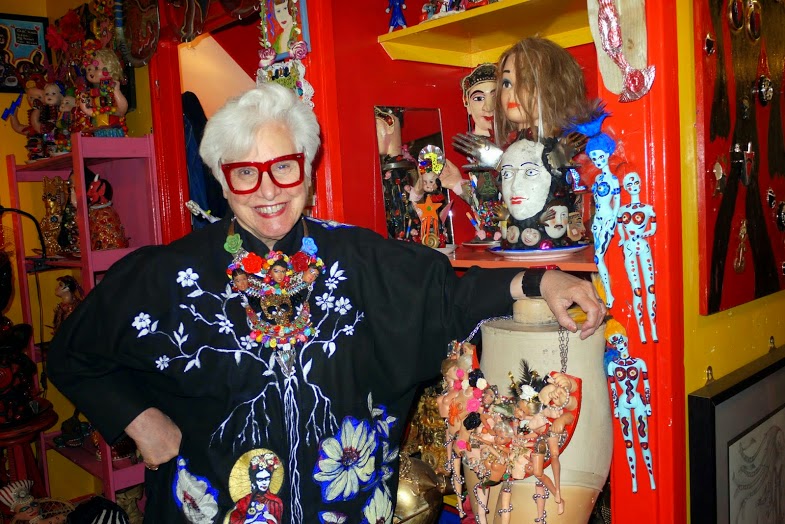 I feel this necklace looks perfect on this  magnificent Frida Kahlo Diane Goldie jacket, as if the painted branches were an extension of the necklace creating a continuity between the jewel and the clothes, reminding the  "Thorn Necklace and Hummingbird" painting. 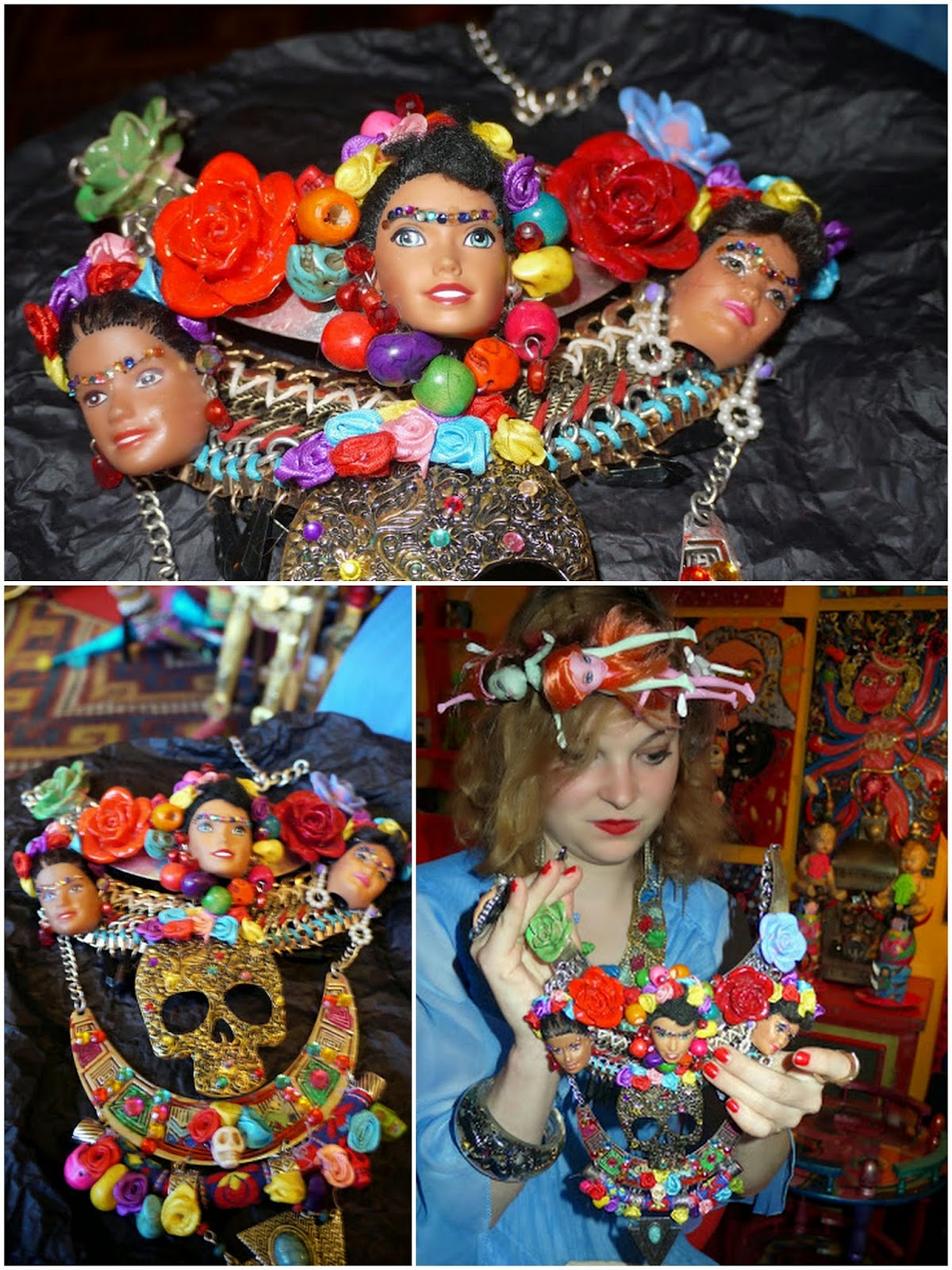 We went in her workshop where she show me the new pieces she made over the night.  I think it is just my favourite place in the world, an Ali Baba cavern, an heteroclite sanctuary where she collected over years random objects in flea market or given by people. 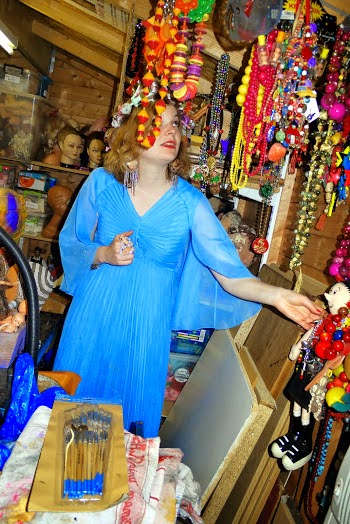 I am proud to be featured in the magazine In / Sider by the great Sarah Buchanan. She made a real journalistic investigation about my work before interviewing me (the moment  you realise that some people actually read all the stupid things you write on your blog). 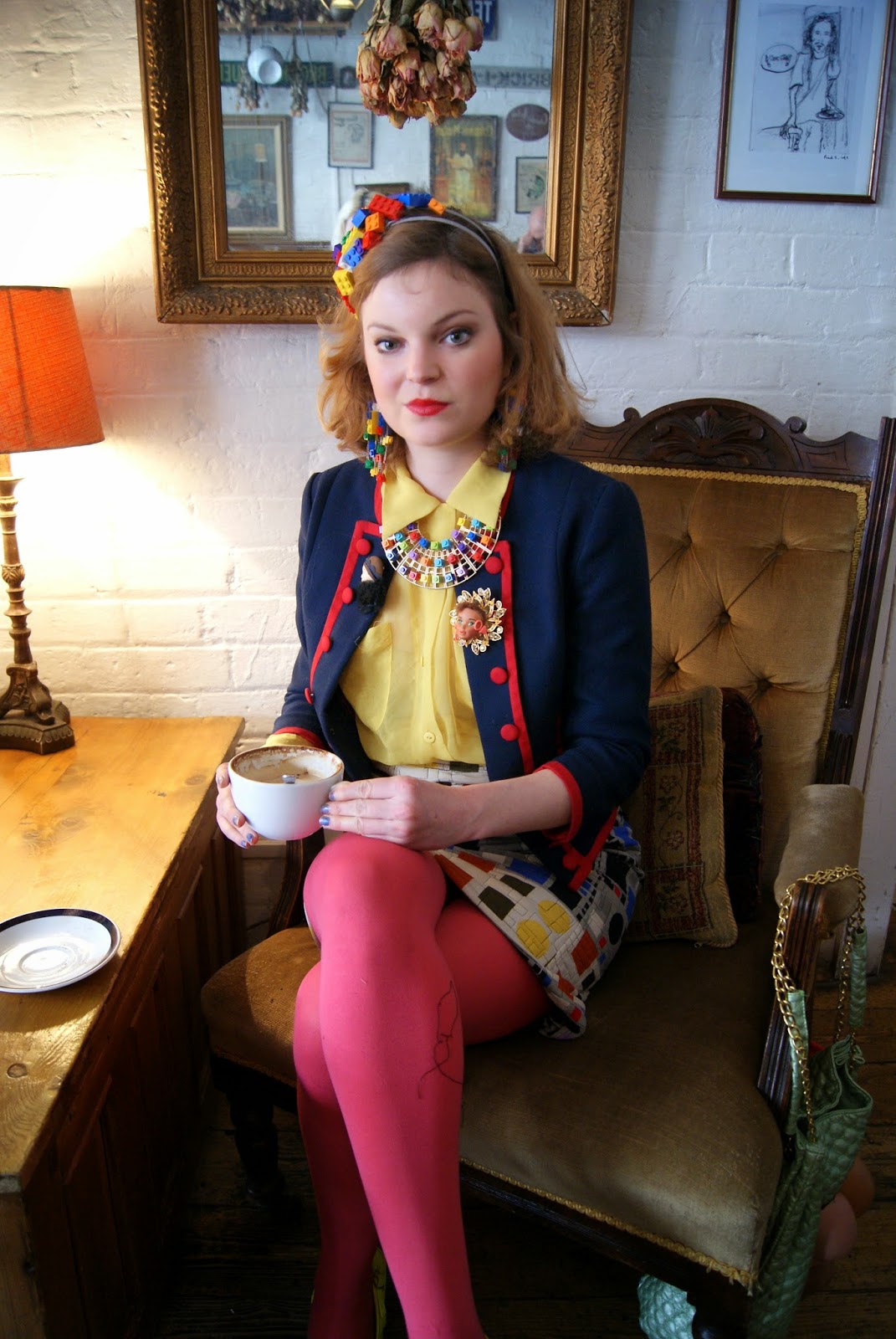 Around a nice Cappuccino at the Emporium Coffee in Bricklane I just talked about everything and nothing during one hour, recorded on her dictaphone.  This is the result here . The magazine is also featuring great artists like Sue Kreitzman, Diane Goldie, or Britt Foe from Cult mountain. 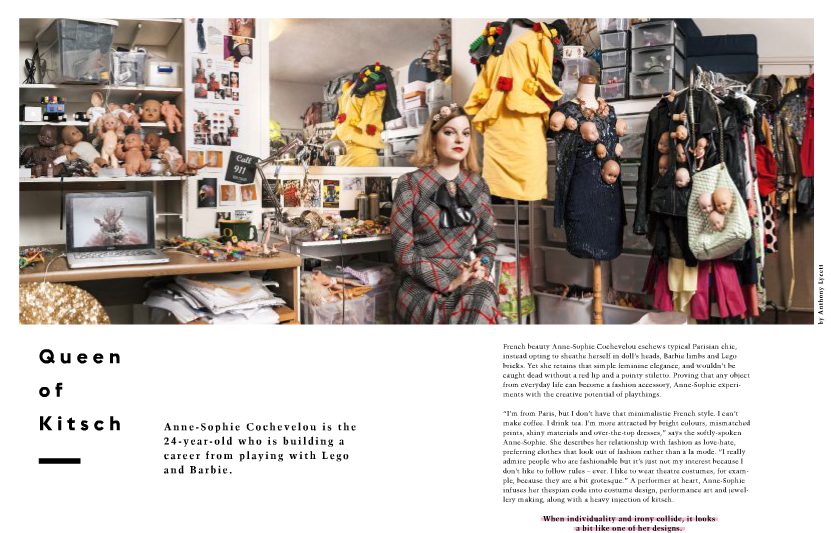 Interview for the magazine 2French, 2-French is a digital magazine inspired by French culture and way of living, dedicated to high fashion, design and the arts, lifestyle.
As you may have noticed my style is more eccentric London than minimalist Paris, but you can't deny your origins, people in England always tell me "My God you are so French" and I don't even know what does that mean". 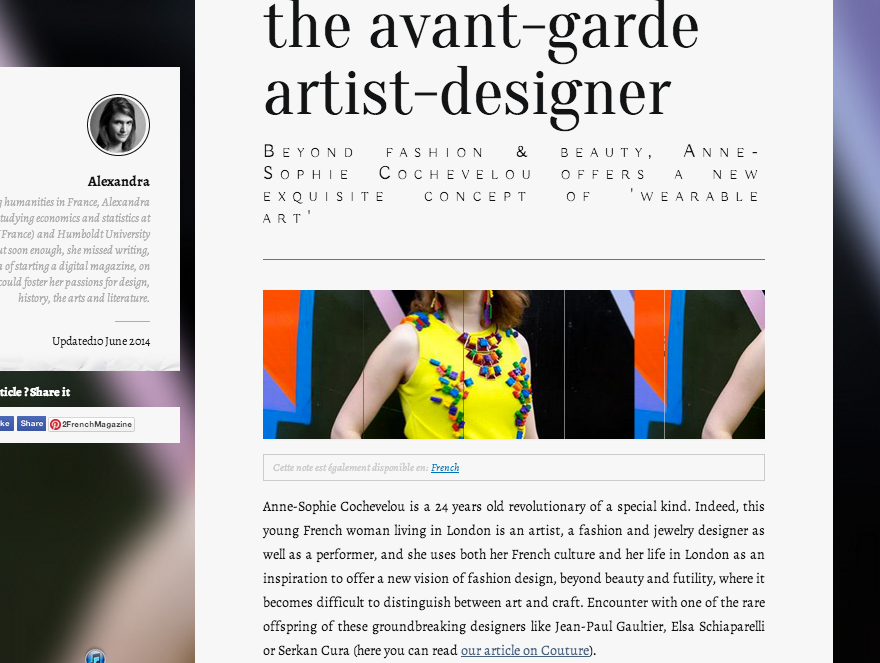 (find the original version in French here, after all I express myself better in my native language!)