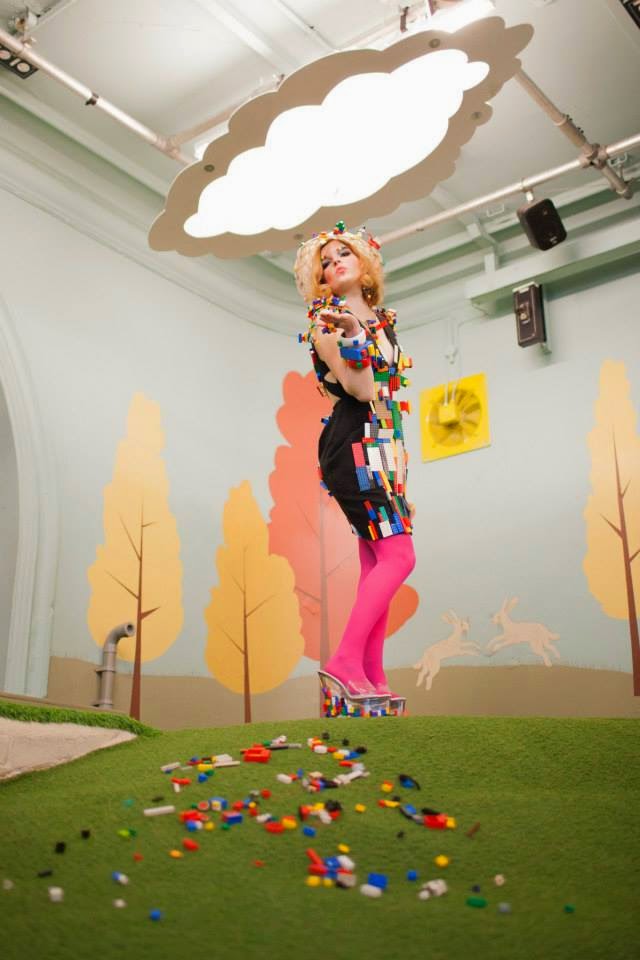 I've been doing this interactive costume base performance in 2 different places and two different context and atmosphere.
I've first performed in the Battersea art centre for "Play Festival
then I performed it in the bar Number 90 in Hackney Wick during a DJ set live, 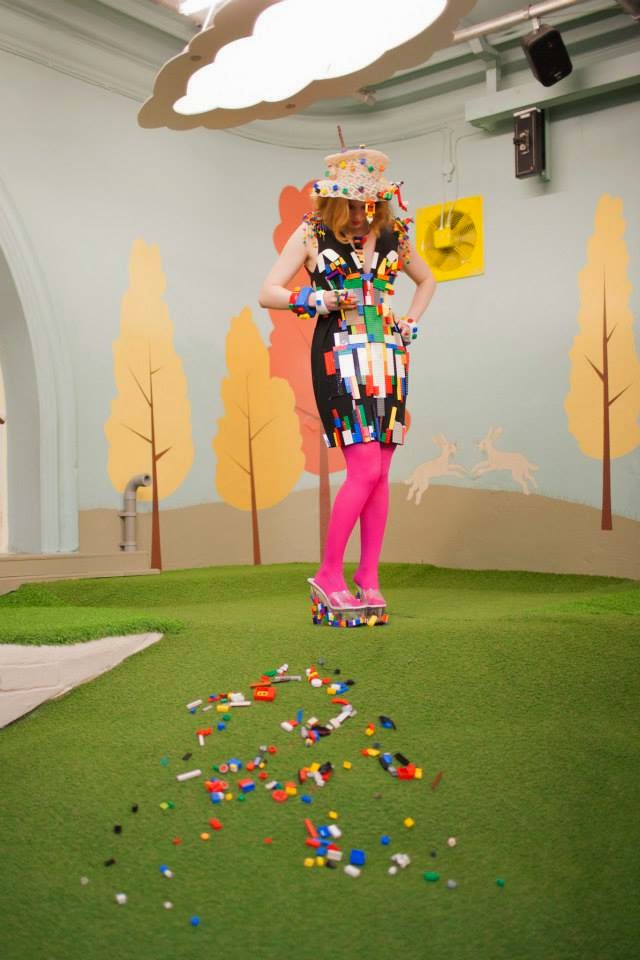 I made this dress with flat lego bricks and lego plates.
During the performance, I was inviting people to build my dress directly on my body to create a living lego construction.
So this is an evolving garment, always moving, between construction and destruction (because some bricks fall when I am walking or people undo what previous people just built). The final dress is the product of the meeting of tow creativity, mine and the one of the audience, making its own design by contributing to the dress, litéralement "apporter sa pierre à l'édifice" . 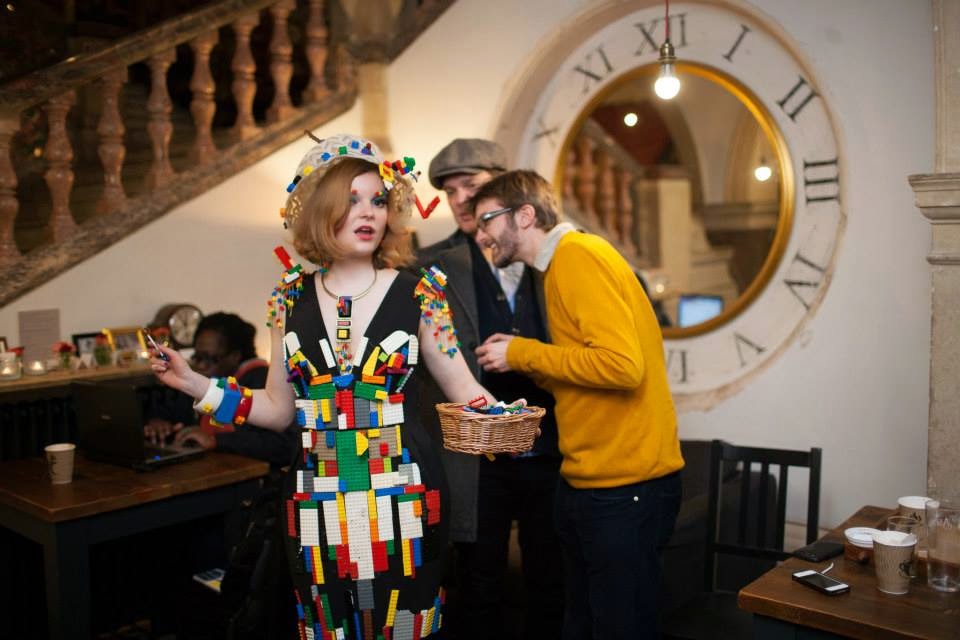 People reactions are generally positive positive, and people are really responsive. If some people just reject the offer straight away, the majority is really enthusiastic "of course" yes sure can I?"
It is a really good way to get in contact with people.  Because the proposal is so strong and so surreal, Imagine a girl dressed  with a Lego dress asking you to build her dress, that they have nearly no other option that to accept. 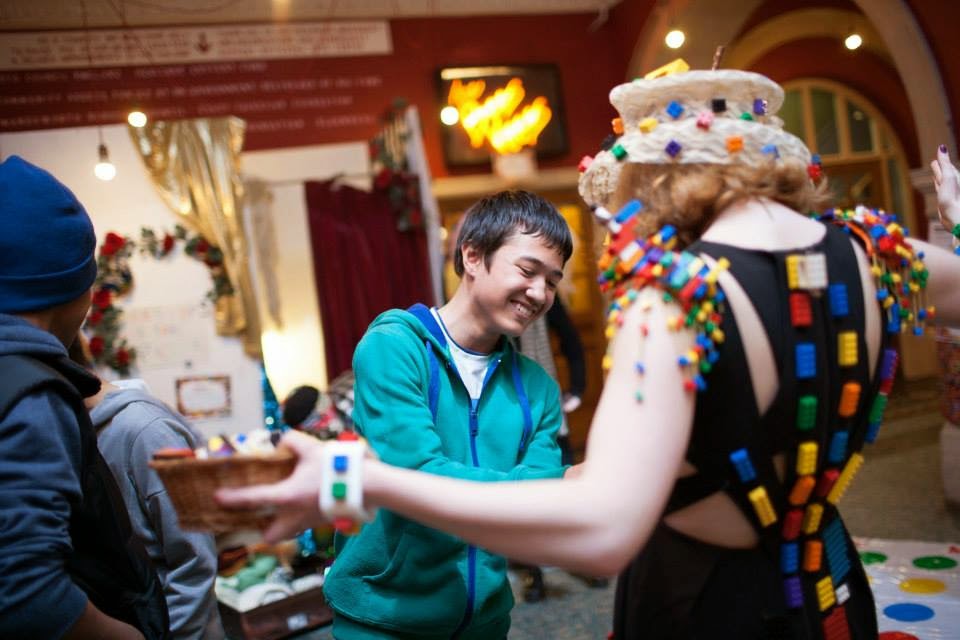 When people realise they can pick any bricks and can put it anywhere, that the possibility of combinations are infinite, they are just going crazy looking frenetically in the box the perfect lego piece. 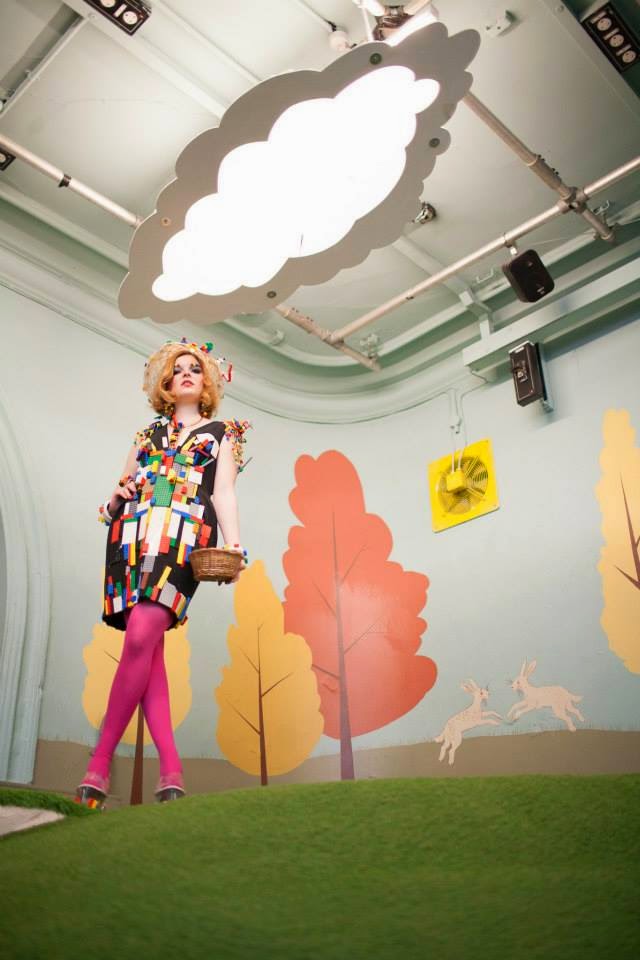 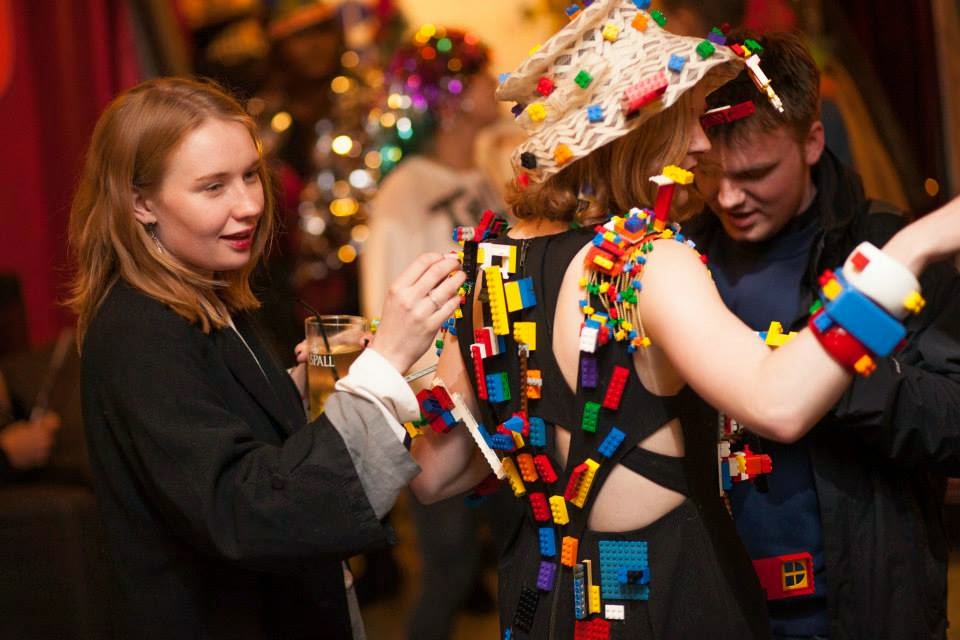 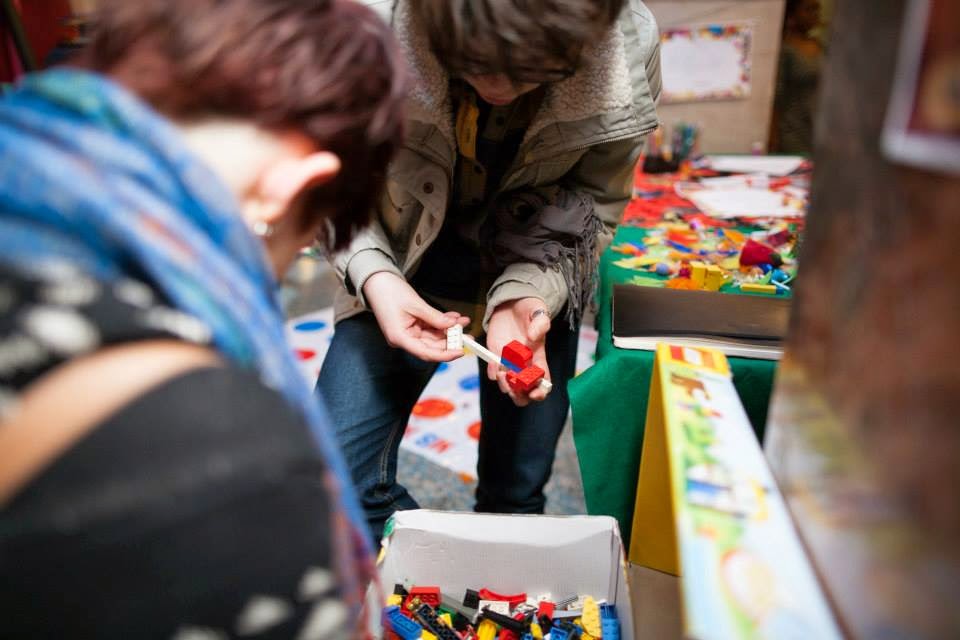 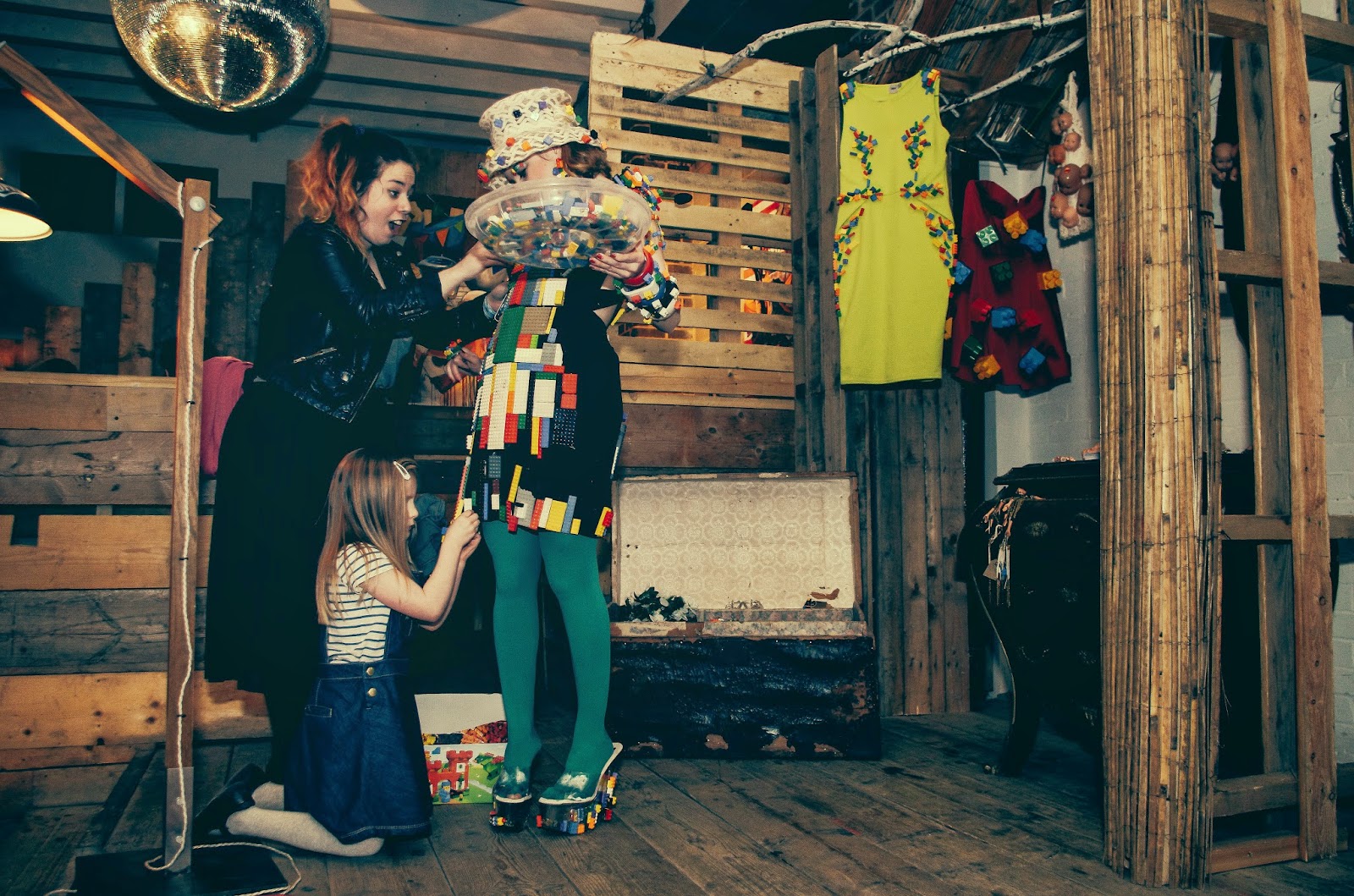 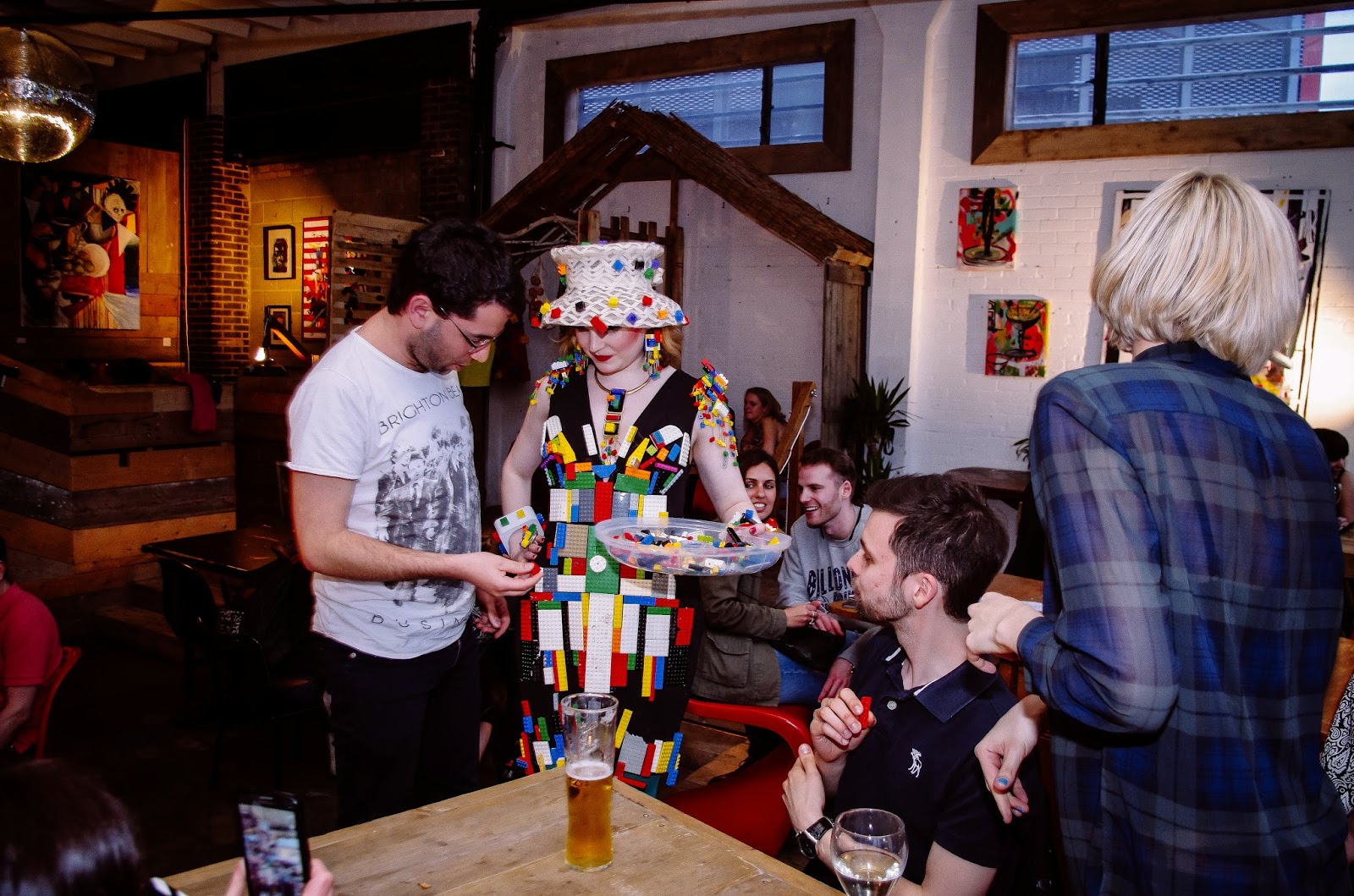 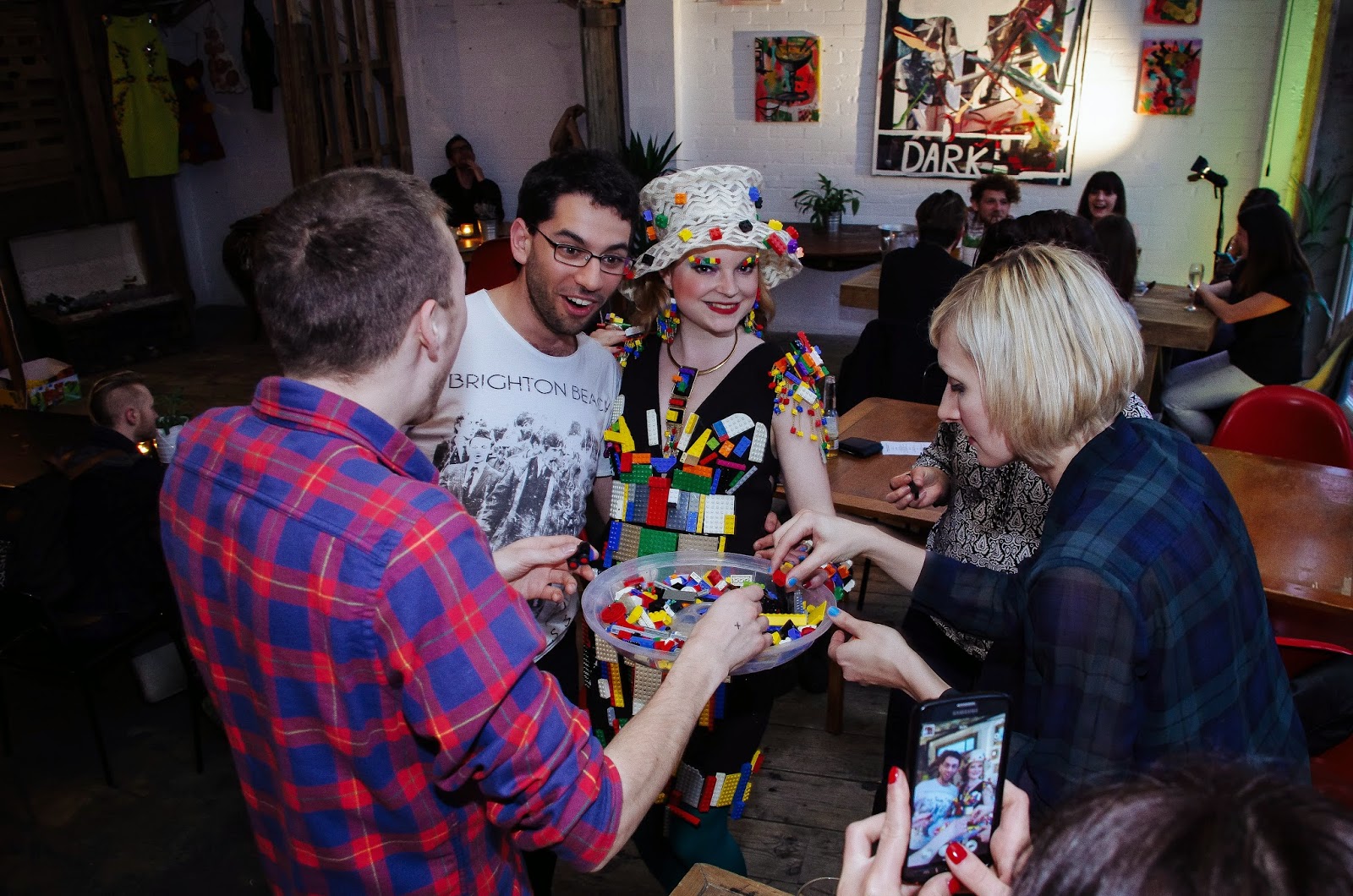 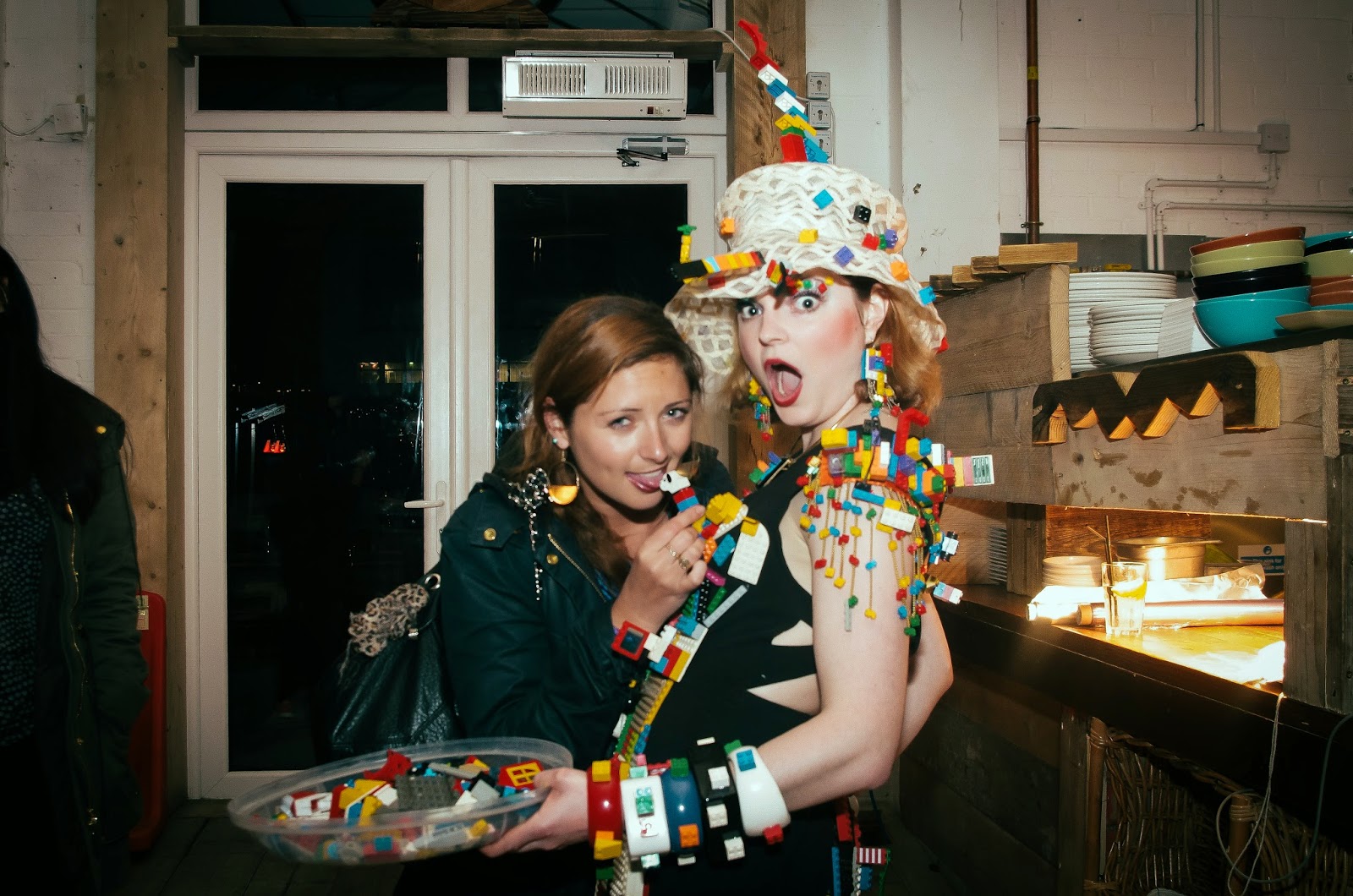 It reveals also the will to test the limits of the performance and always try to get around the rules.   You will think people will go for simplicity and take a square brick and just adding it gently on the dress, They will always try to put the lego in the weirdest place, (lot of people were actually interested in artificially  growing my breast out of lego) choosing the most incongruous  shape and trying desperately to incorporate it to the ensemble. Some people go for really elaborate construction creating full extension of the body "I want to make you a unicorn, building a colourful horn on the hat" I am going to build a house on your shoulder" I want to link your dress and your hat. 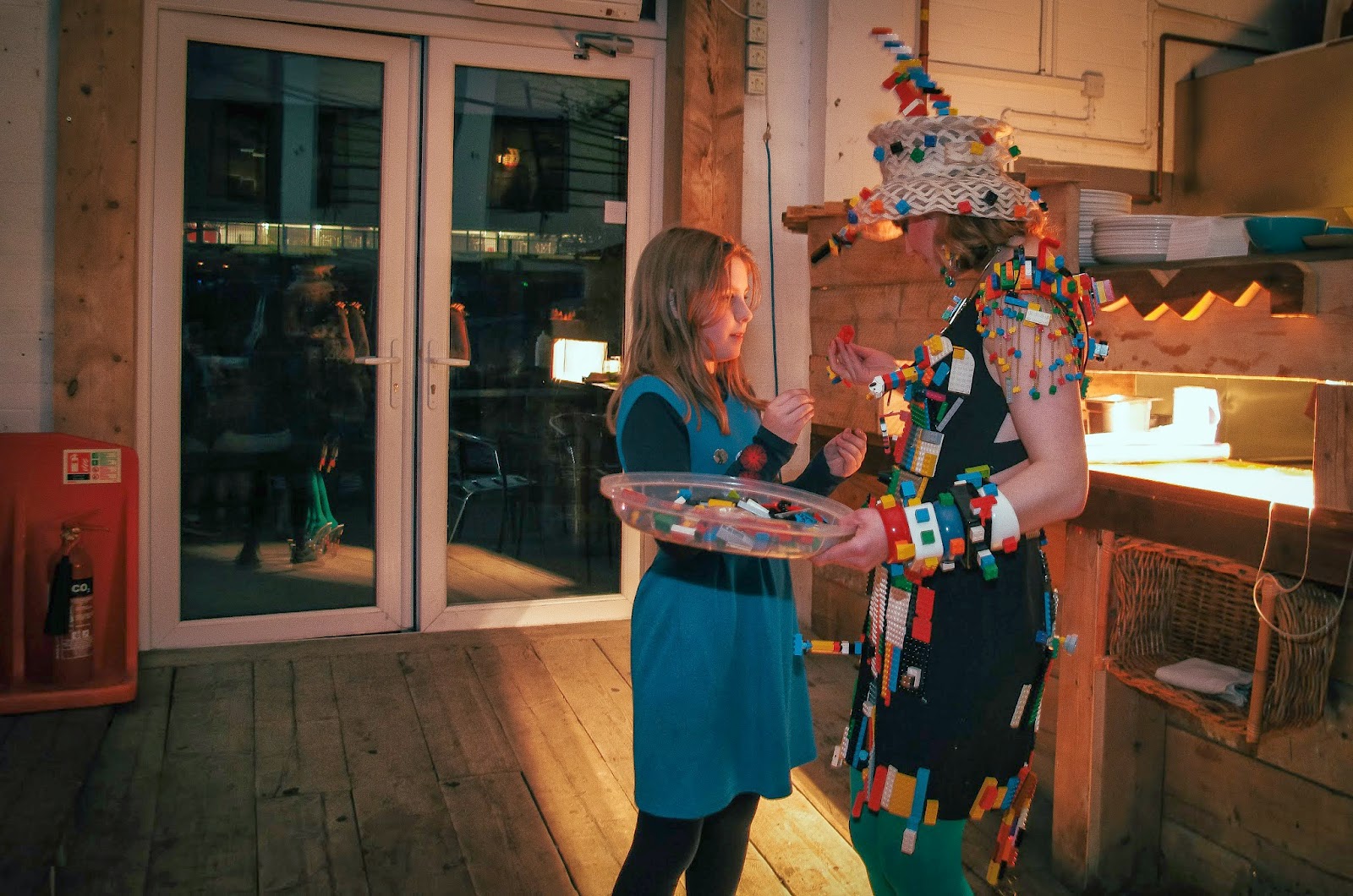 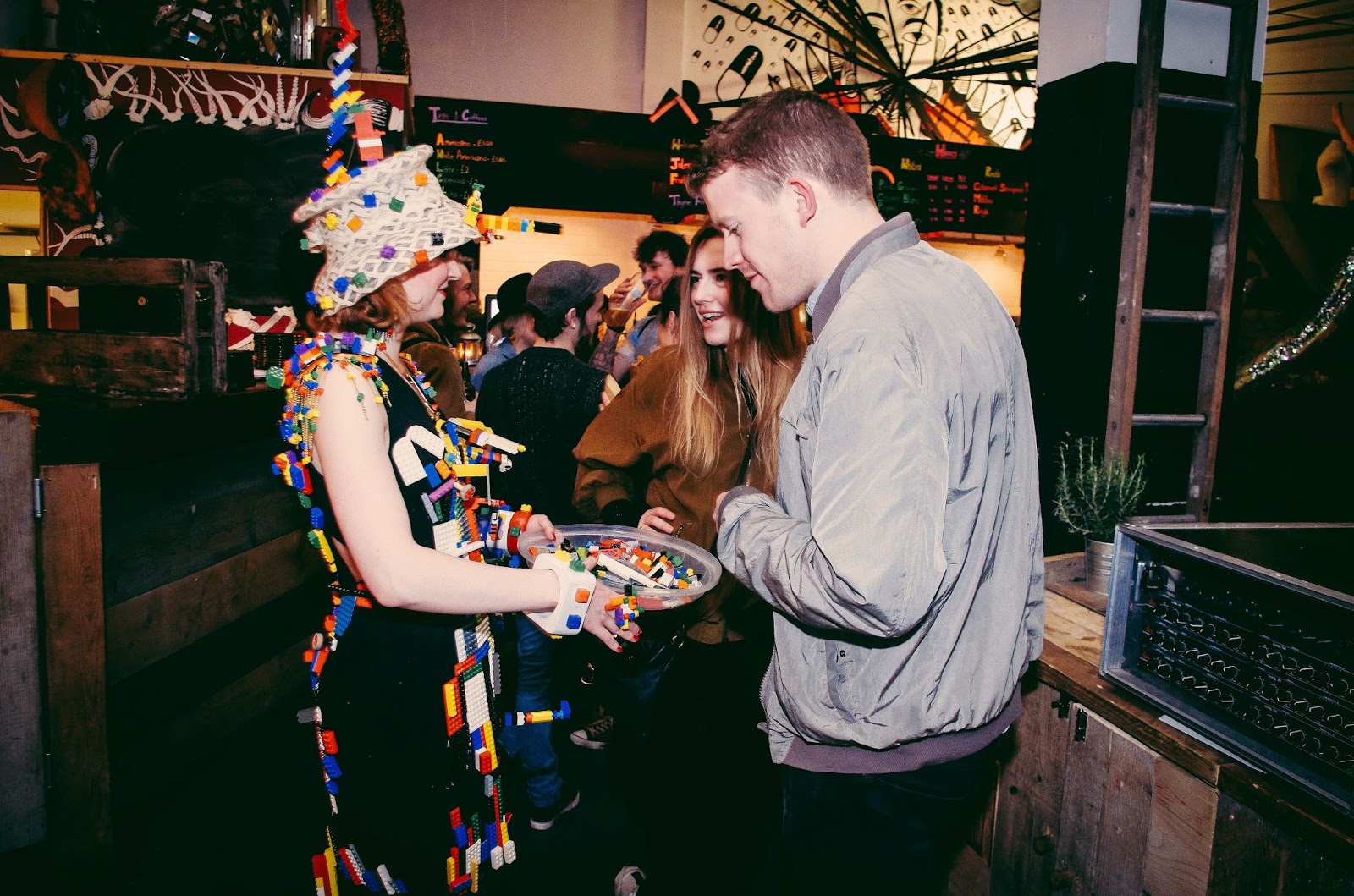 To come back home I just kept my lego eyebrow (stuck with PVA wood glue! as a token of the vanished performance. my flatmate was outraged in the bus "People are idiots, they  staring at you jet because you have lego eyebrows" Actually, if you don't know me this statement may seem quite surrealistic but that is the purpose of experimental costume, you generate new rules and create your own reality, living in a world where you can have lego eyebrow or barbie hands on your ears! 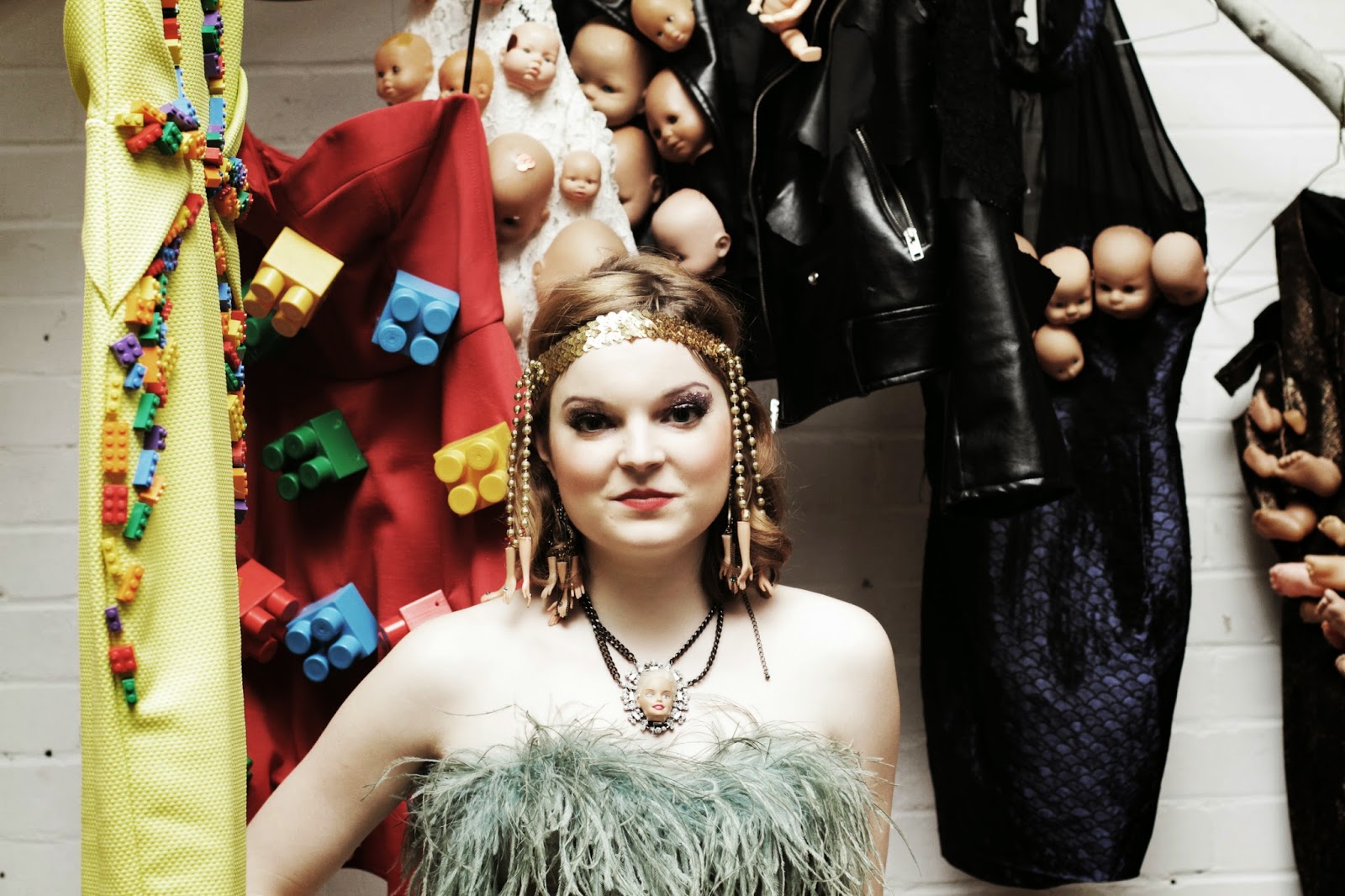 
On theses pictures she is wearing my "barbies accessories necklace" with toothpaste sunglasses!