Created around  Loulou Reloulou's movie around her mural painting at Bethenal Green working men club in the smoking area.
The accessories represents days of collection of cigarette butts at bus stops and public spaces. If you are a smoker it is a good technique to get offered cigarette as people think you are too poor to buy your own! 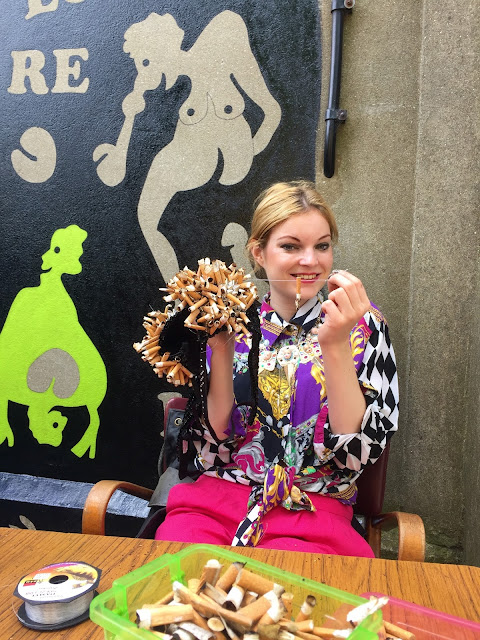 As often, I resorted to an aesthetic of accumulation of objects, using disgraceful junks to turn it into poetic artefacts.  from waste to to beauty.
Stitched one by one, the cigarette butts that ruffles the bra give a dimension to the performer of an Amazon warrior.

The headpiece is like a trashy Madonna aureole made with cigarettes packets filled with cigarettes butts. Diverting the desacralised iconography, between Jean Paul Gauthier baroque headpieces and neon holy virgin. 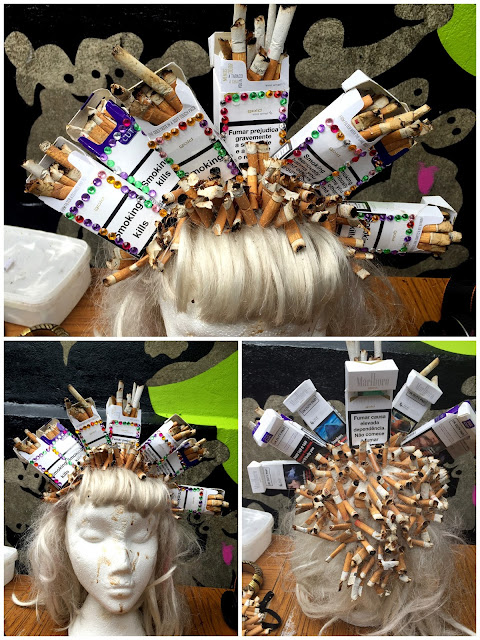 I am seriously considering to create a quit smoking programme based on sewing cigarette butts on garments as the smell is at the limit of what is tolerable. Just imagine the disgusting smell cold ash tray multiplied by 100.


Obviously I couldn't work from my studio because of the terrible smell so I was happy to set up my small residency at the legendary BGWMC stimulated by a very creative atmosphere. 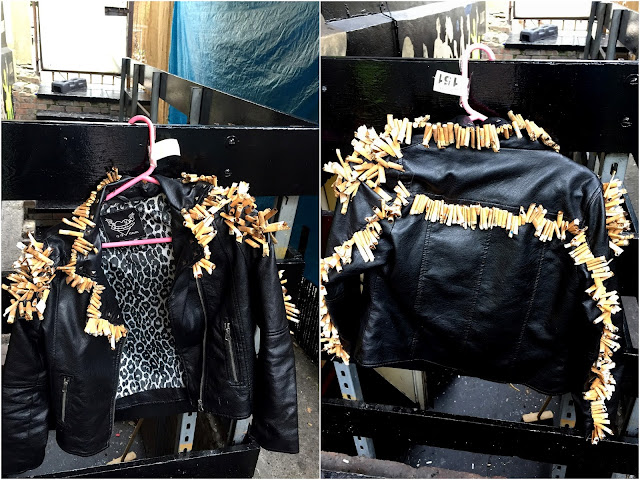 The leather jacket is not a "smoking" but a cigarettes jacket where the spikes have been replaced by butts. Or a cowboy jackets with cigarettes fringe, diverting the subliminal image of the Marlborough Cow boy smoking advert , you can't go more punk!

June was marked by various flamboyant event like Advanced style's Ari Cohen book launch.  A great occasion for a gathering of wonderful characters creating an unusual attraction in Selfridges where normal customers came to buy their perfume of luxury handbag were wondering what was going on!

My look for the launch: when the pearly queen Maharadjah meet the vintage moulin rouge aesthetic, I found this traditional Indian turban at Bricklane market that I adorned with a peacock that I found at Emmaus. I also stitched big pearls to accentuate the exaggerate luxury side of the piece as pearls necklace coming out of a pirate treasure chest. 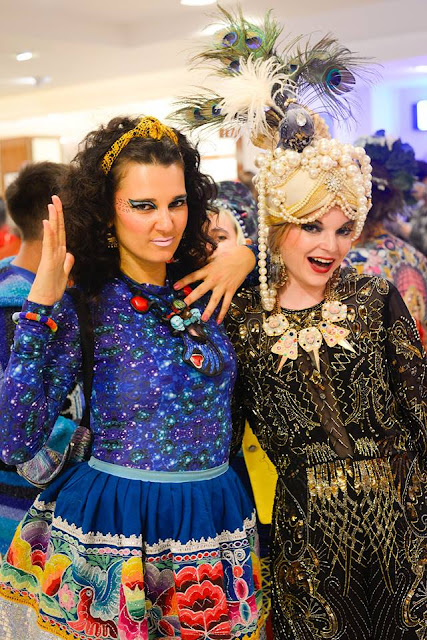 With the fabulous perfomer Gaffy Gaffiero by Richard Kaby 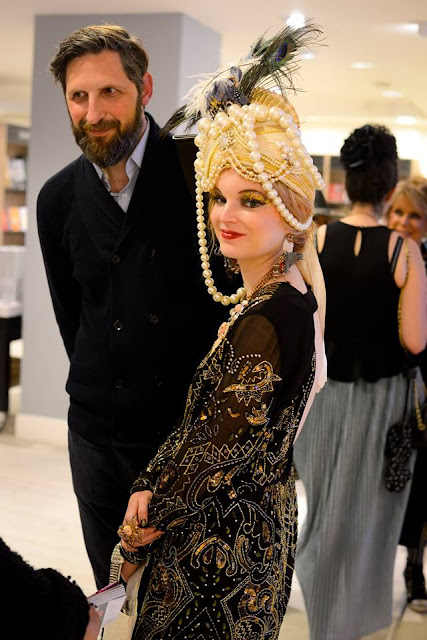 With the talented photographer Anthony Lycett by Richard Kaby 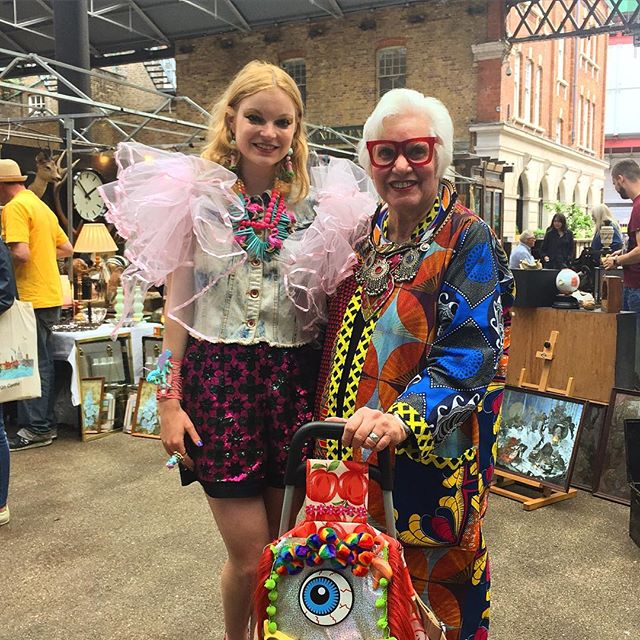 I made Sue a barbie torso hearts necklace inspired but Indian carved wood elephants that got a tiny baby elephant in their belly.  On a fabric base I designed a pattern  for the light empty barbie torso.


Then it is like an open heart surgery when I carved the shape of the heart with a scalpel. 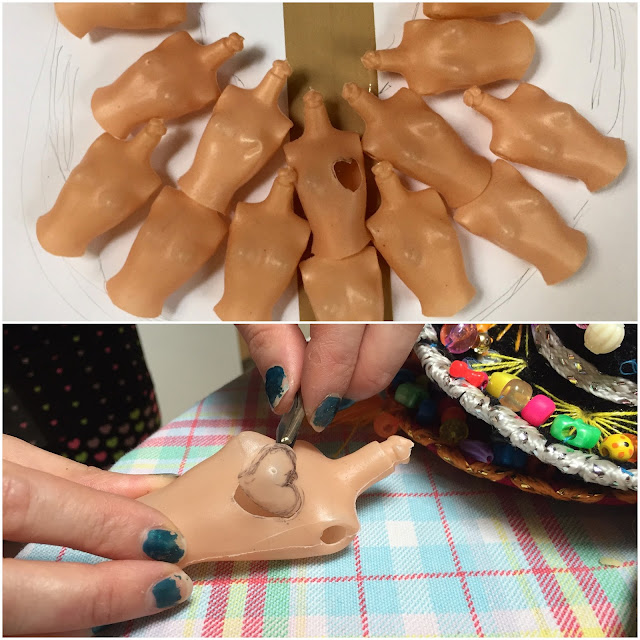 The difficulty was to match the colourful heart beads stitched on the fabric plastron with the whole of the torso. 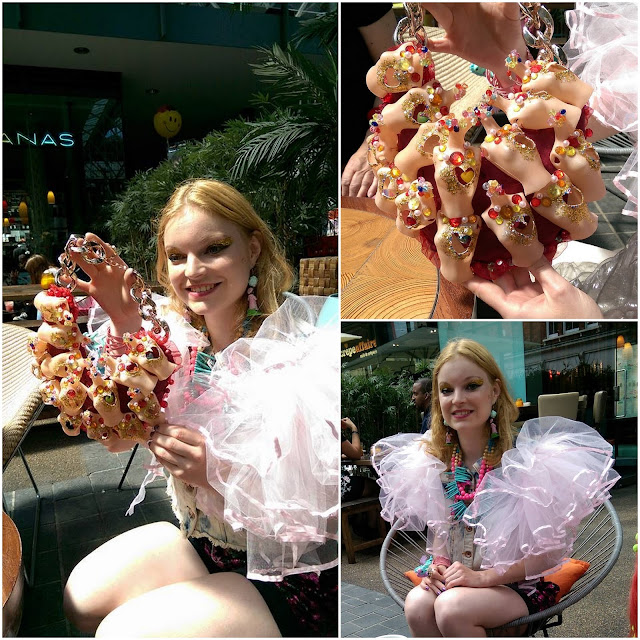 I also made a very detailed embroidered handbag with poly pocket dressed in sequins  and my bling-up my little pony! 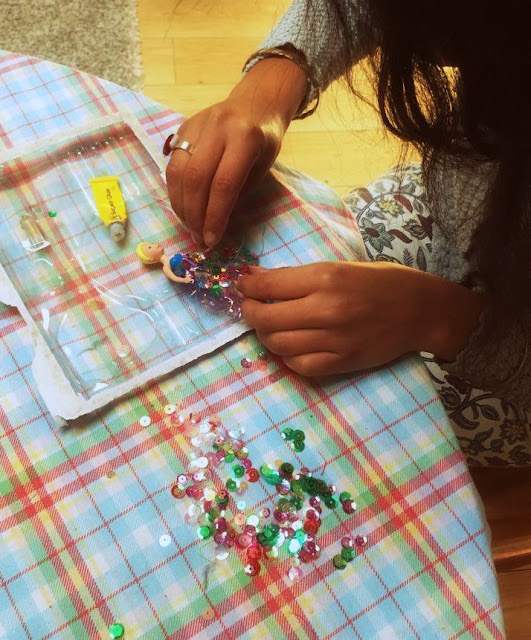 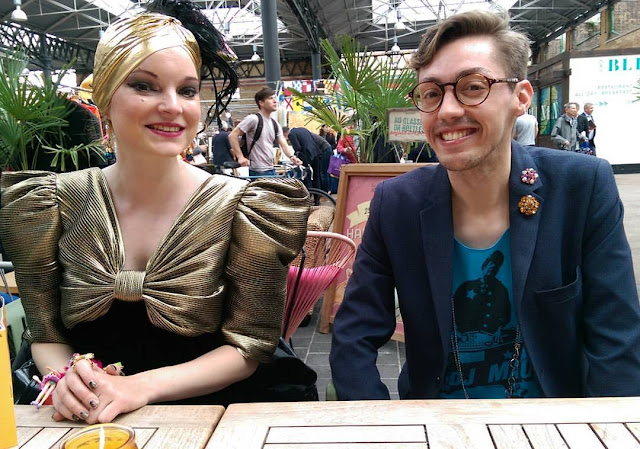 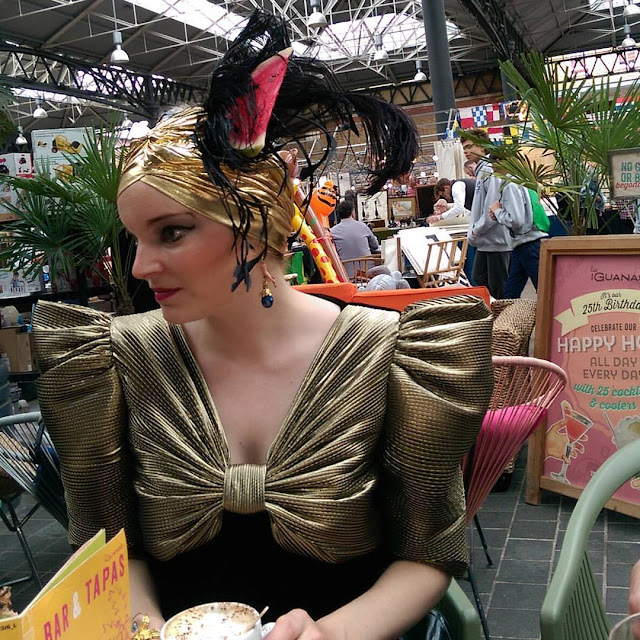