It all came out of an egg… I was finding a disney princess in my kinder egg for easter and the idea came to make a kitsch fairy tale necklace for Sue Kreitzman.
(imagine how much kinder I had to eat to have the all collection (I have the worst job in the world!)
Even if this necklace is marshmallow pink, full of glitter and sequins, it is mistakenly girly, in fact, it is a new age  fairy tales story that I just made up in the creative process: 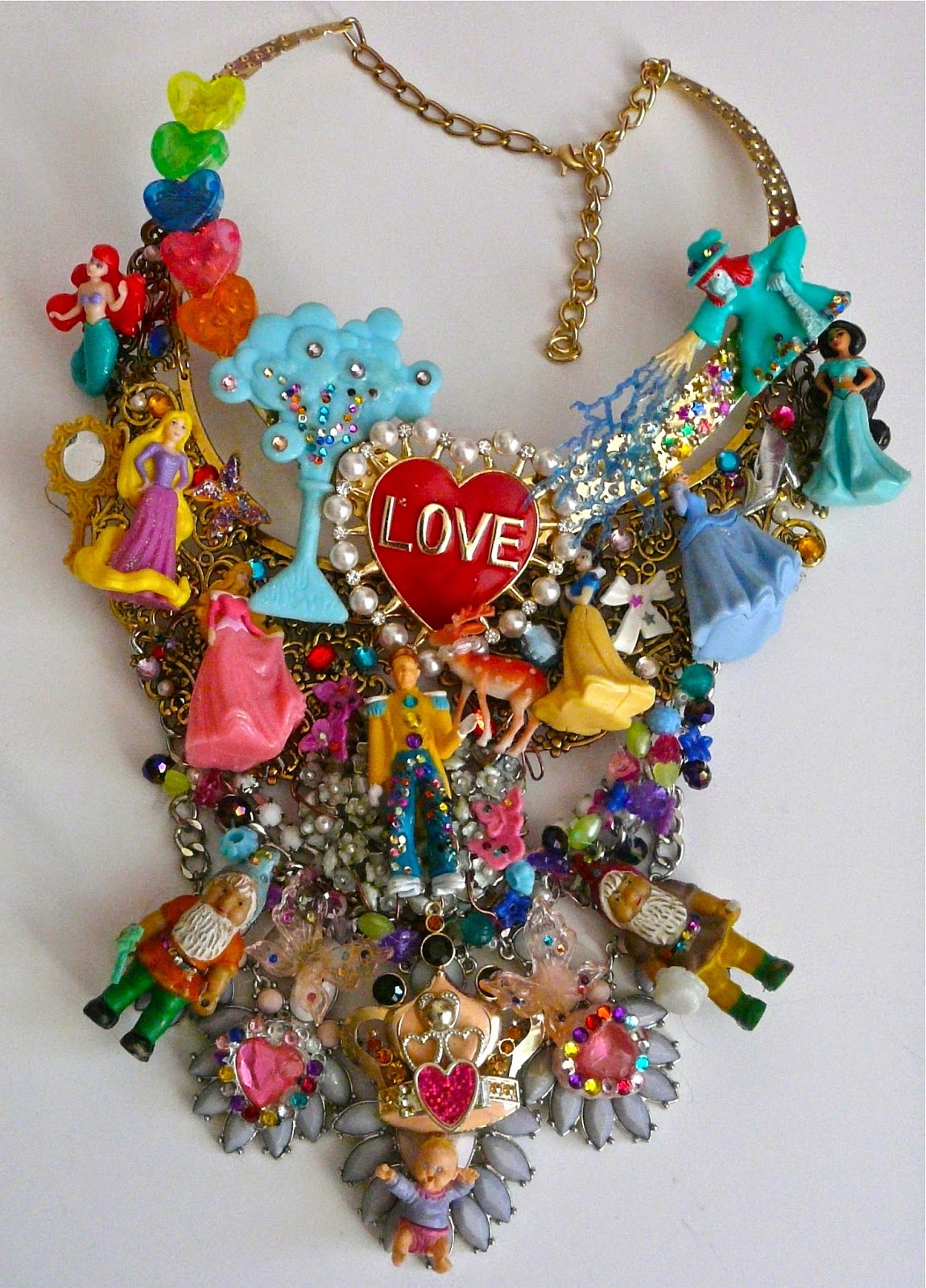 The prince is wearing a  "Prince" glitter jacket but he is singing "YOU HAVE TO BE RICH TO BE MY GIRL" so he is playing to Bingo love princess in Vegaswonderland.  He his choosing between 6 disney princess (Ariel, Jasmine, Snow White, Belle, Sleeping Beauty & Raiponce). But the witch is spelling a cast on the bingo love creating a magic filter for the Prince to fall in love with her and access to the royalty protected by the dwarfs bouncer holding sub-machine gun.
The prince marry the witch, have lot of monster children and create the own  successful freak show that they are touring everywhere in Vegaswonderland.
THE END
On this pictures took by the great Sylwia Grzegórzko I wanted to embody the equivalent of the modern princess, hit girls,  void icons venerated by millions of young girls like Kim Kardashian or Paris Hilton, spoilt rich tacky girl  promoting money and artificial beauty as happiness. Far from the model of Grace Kelly or Lady Diana, their are wearing the bling crown and reign over the planet People of fan.  Their balls are private parties in  hype night club and their white horse have been replaced by Limo. 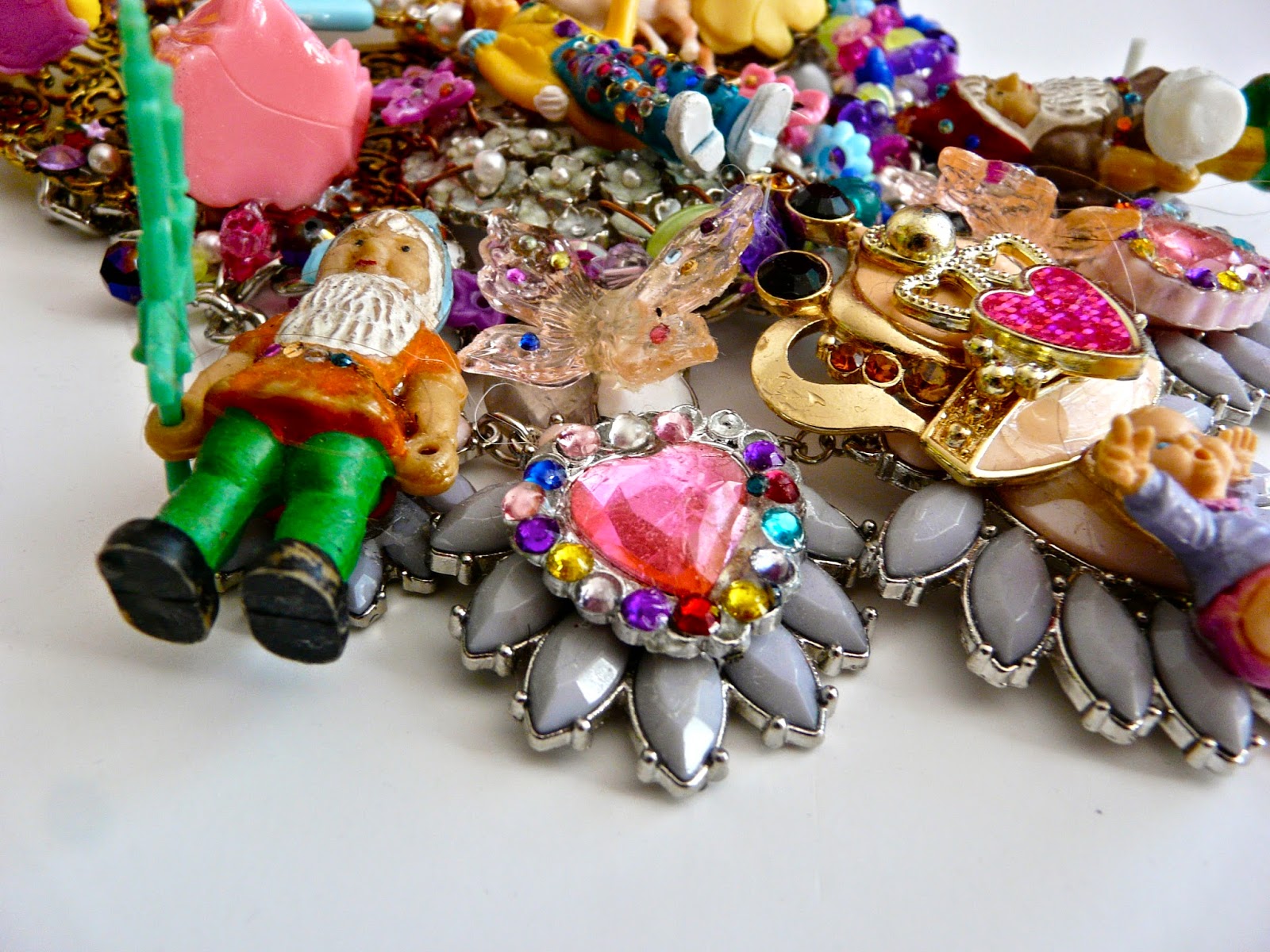 The amazing thing with Sue, is that she gavel me total freedom in my creation and allow me to explore the concept of narrative jewellery, piece of jewels that tells stories. 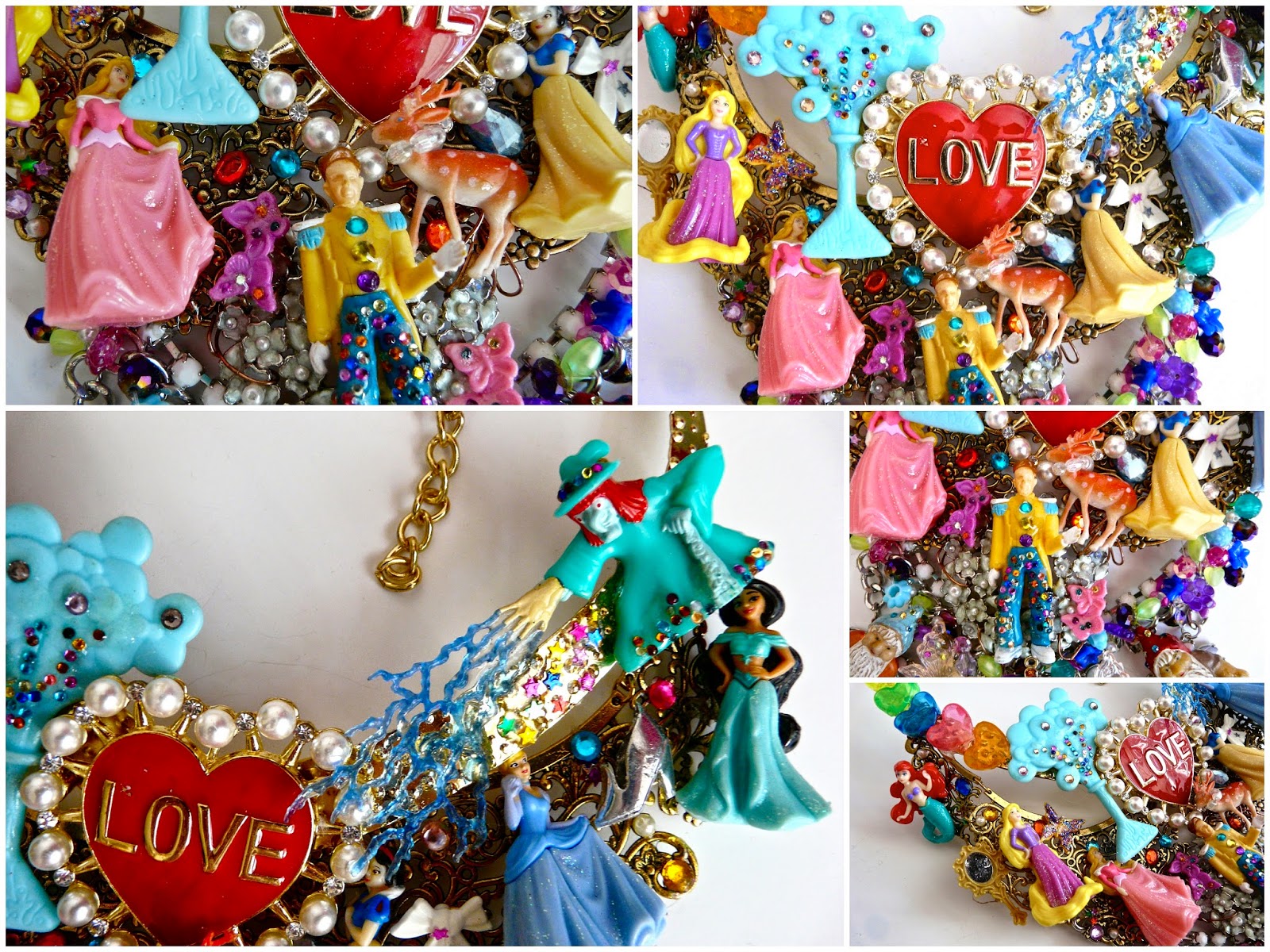 I went to Sue's house wonderland, definitely better than disneyland to present my princess necklace to the queen of style! 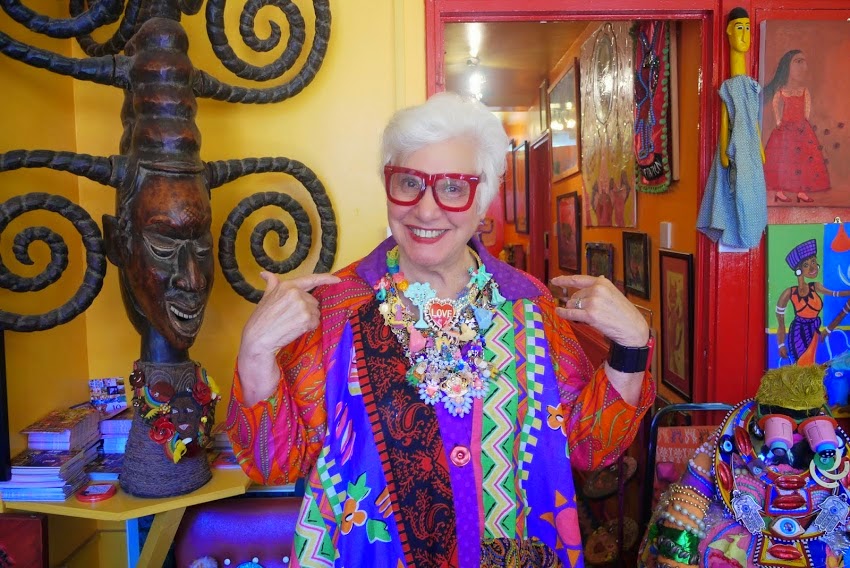 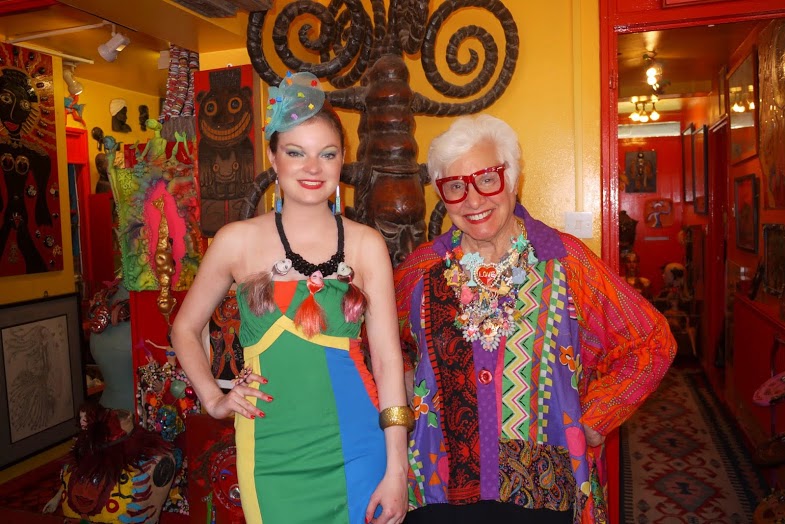 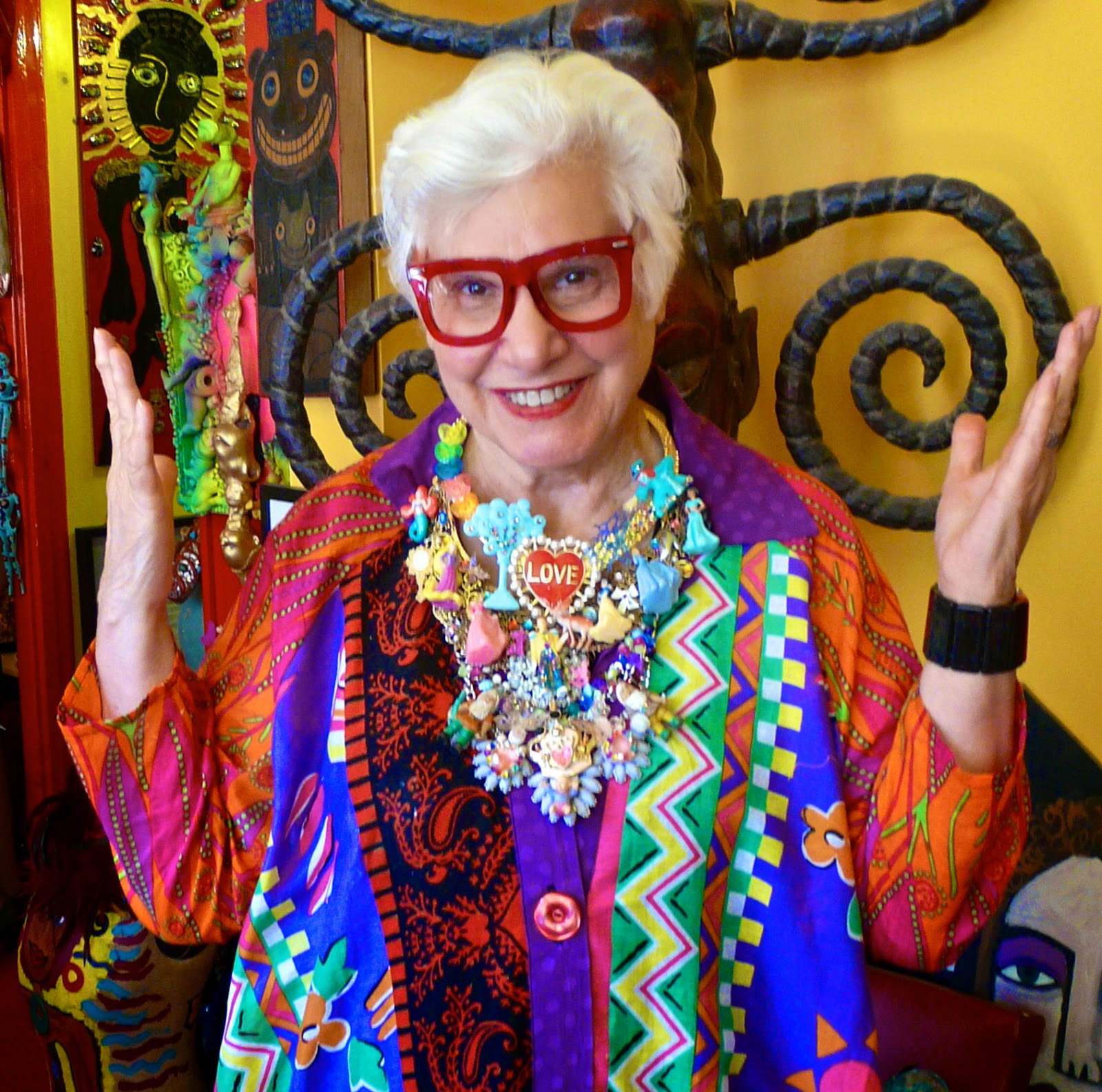 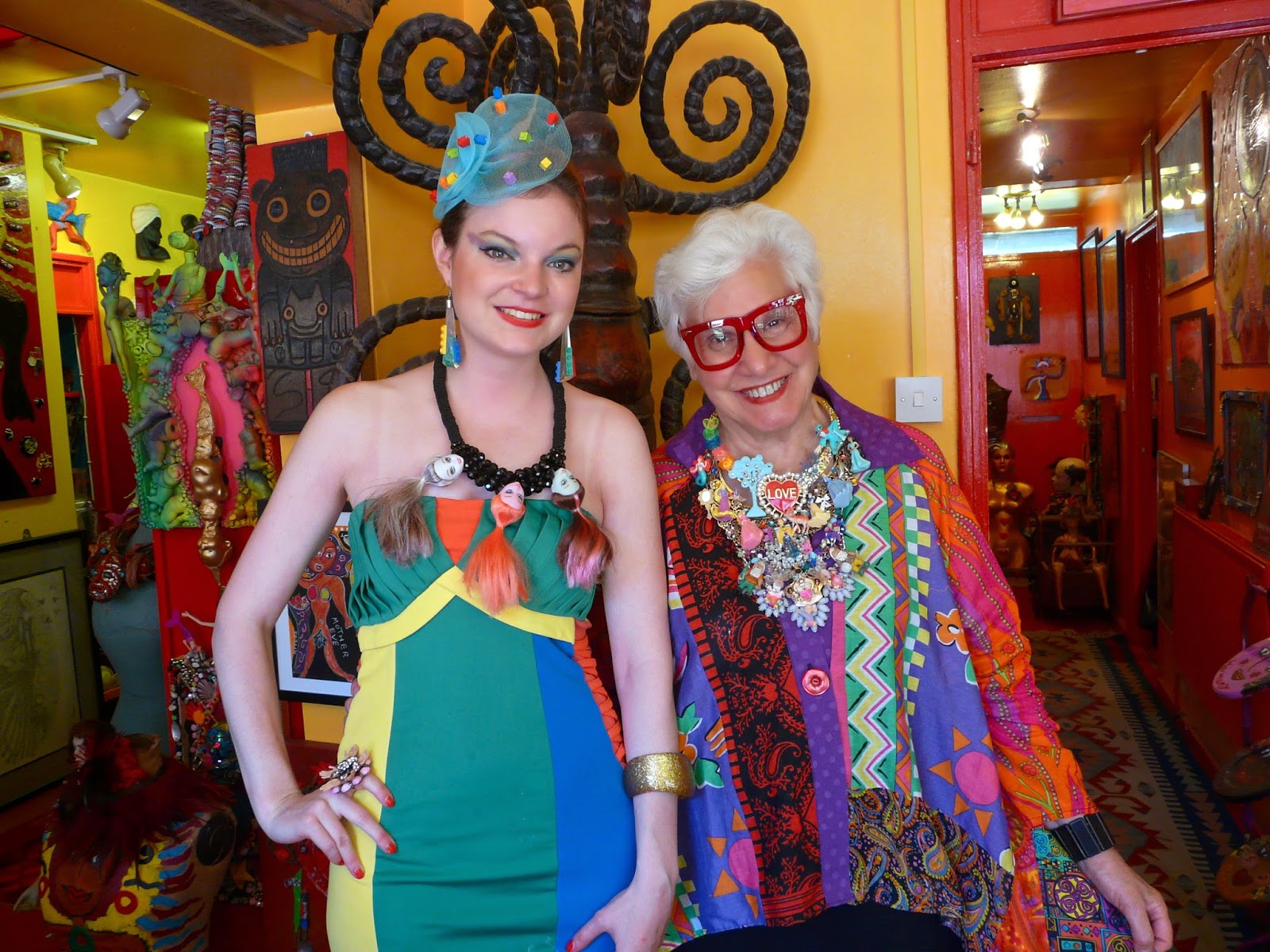 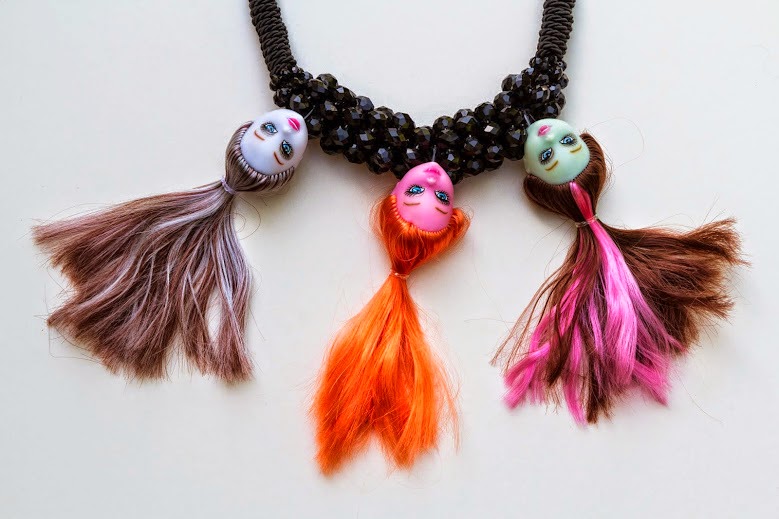 Why it is always funny to turn fairy tales upside down? Because princess and fairy tales are strong archetypes, fundamental myths of our societies that play on the deconstruction of theses icons.

Postmodernism uses common references know by everybody to divert them from there original function, creating pop culture that is always self-referential. Because  folkloric tropes have near universal relevance , he sacred and polished image of theses model of perfection and purity are more easily battered and re-appropriated by the artists.

That’s what Dina Goldstein is curious about. In her gripping photo series FallenPrincesses, Dina Goldstein envisions how Disney’s most celebrated females' lives would have played out in the real world.

I grow up with classic fairy tale, where the prince charming marry the princess and they live happy forever, seeing Shrek, where the monster marry the monster-princess at the end when I was around 10 years old was already a revolution breaking up into piece all my illusion abut fairy tales. But what about the next generation?  Did they grew up with theses twisted a fairy tales symptomatic of our disenchanting society?  Maybe, turning upside down theses fairy tales, turning little riding hood into a drug dealer or Sleeping Beauty in a prostitute is becoming too easy, cliché and overdone. It always works as a pop culture twist and provoke a striking image and dark humour.

For example, artist Saint Hoax is changing the fairy tale ending we are all used to in Disney movies, by raising awareness with a domestic violence campaign featuring abused Disney princesses. 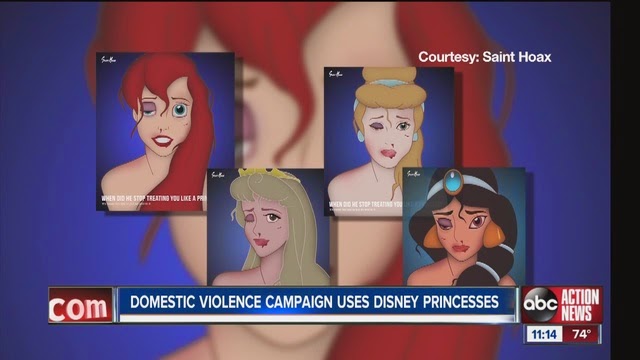 The campaign is called “Happily Never After” which, according to Hoax, features four Disney princesses - Sleeping Beauty, Cinderella, Jasmine and Ariel – like we’ve never seen them before.  The abused princesses are shown with black eyes and blood coming from their faces. 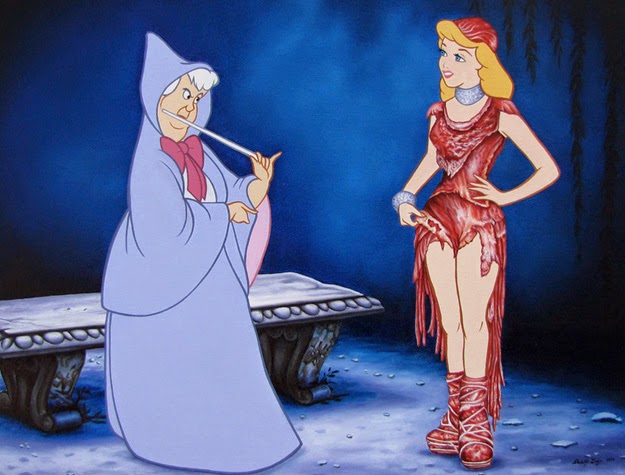 In "DisasterLand, Rodolfo Loaiza show what happens when Disney characters meet pop culture.
Where else can see you see Cinderella rock Lady Gaga‘s famous meat dress? Or get so fed up with her life that she channels Britney Spears in her meltdown days by shaving her head?
Here’s how the exhibit is described: “Rodolfo explores what would happen to our fables if they were flesh and blood and confronted with the frenetic and excessive world of fame. Who among them would prove susceptible to the excesses of drugs, alcohol, harassment or vanity?”
In addition to the Cinderella exploits described above, Loaiza imagines Snow White as an alcoholic, puts Peter Pan in Michael Jackson’s ‘Beat It’ outfit, and shows Freddie Krueger terrorizing the dreams of Sleeping Beauty — and it only gets more twisted from there.

Maybe the new avant grade will be to return to the old traditional version of fairy tales as a faraway taste of an outdated happiness….
Maybe it will be to artist  with their colourful and original visions to re-enchant the world.
TO BE CONTINUED....
Publié par Anne sophie cochevelou à 09:51