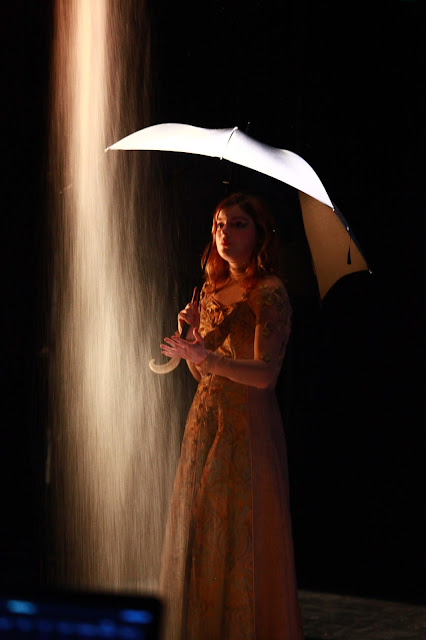 I LOVE working with Yueer, she is an amazing costume designer and all his work is beautiful and blazing like the flower lady at the beginning of the year.  Her costume are all  using precious materials. The finishing touch of the garments  are always perfect, with amazing linings and small magnificent details like an hearing completely embroidered with pearl and golden thread which testify of an accurate and thorough job.
…and last but not least, she always bring chocolates to rehearsal because she know it makes me happy!

I can't recognise myself on the picture. I feel i'm looking a heroin of cosplay in a video game. This look required two hours of transformation -hair and make up realised by Chen Fang.  for the metamorphosis I was wearing a black wig creating a kind of chinese version of me. I was saying to Yueer "now I could be your sister!" 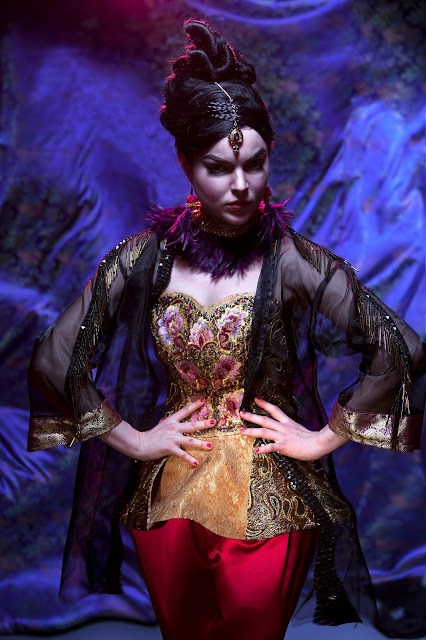 Those outfits are unique, half-way between indian and chinese traditional costume combined by western influenced -retracing Yueer visual background. An incredible work on texture caught in a whirlwind of  oriental symphony of hues, creating synesthesia between shade of colour and material , where you see the texture and touch the colour. 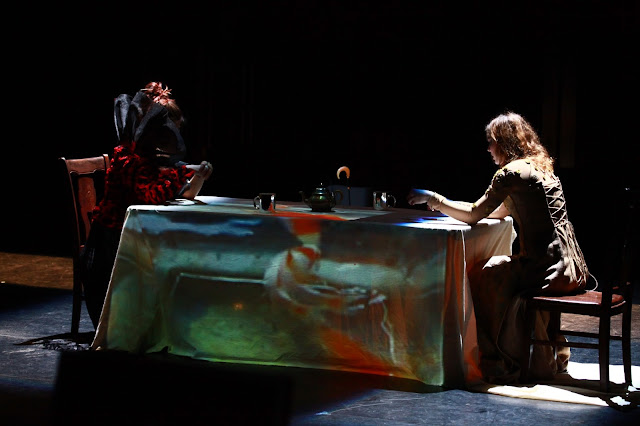 Yueer's final degree show in MA in Performance Design and Practice at Central Saint Martins.
This project was generated from the concept of introspection, combining with the inspirations we got from IBSEN's 'Little Eylef', 'Rosmerholm' and 'The lady from the sea' . An individual's mental situation in conversation with his/her past, present and future. It's a experiment which tries to evoke the audiences' individual experience and imagination by a sequence of interlaced image and sound.

some extracts from the show:


From a cultural point of view, it was really rewarding to work with a Chinese director who has a completely different vision of Ibsen and western play writers regarding their understanding of time and space.
From a dramaturgical point of view, it was very interesting to see how words and speech are replaced by image, songs and projections creating their own system of signs. 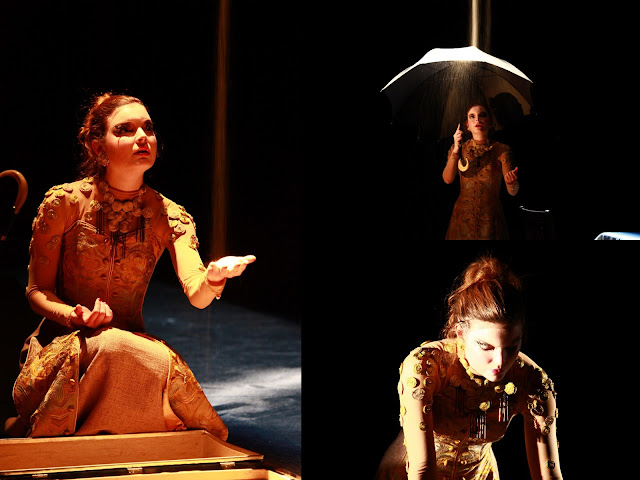 Text was replaced with songs and a series of tableaux, ritualistic gestures and beautiful images thanks to a clever mechanism set up by Jinyu Zhou. For example, they made holes into an old luggage, suspended with a rope which stood for a giant hourglass. Singing with an umbrella under a rain of sand, - just had to be careful no grain of sand where going in my mouth! 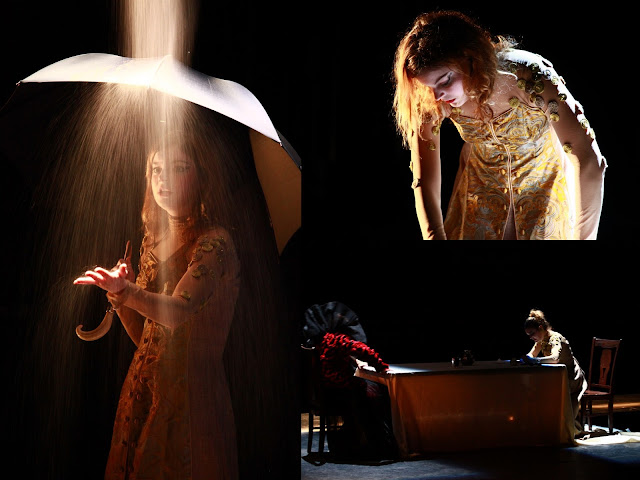 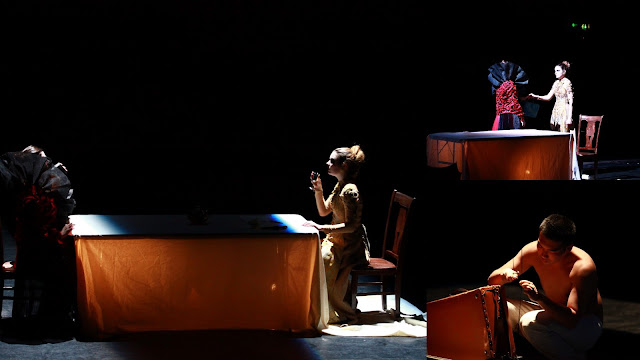 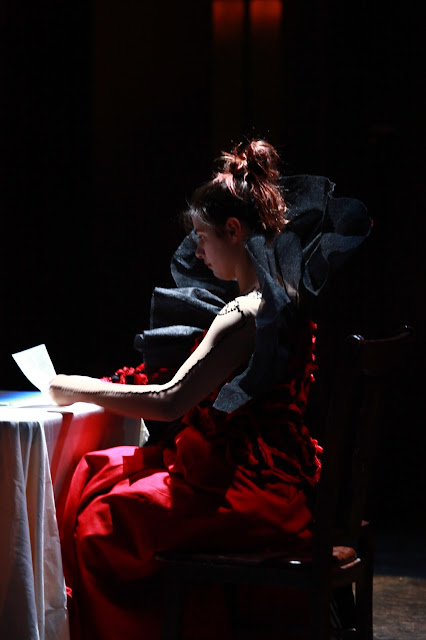 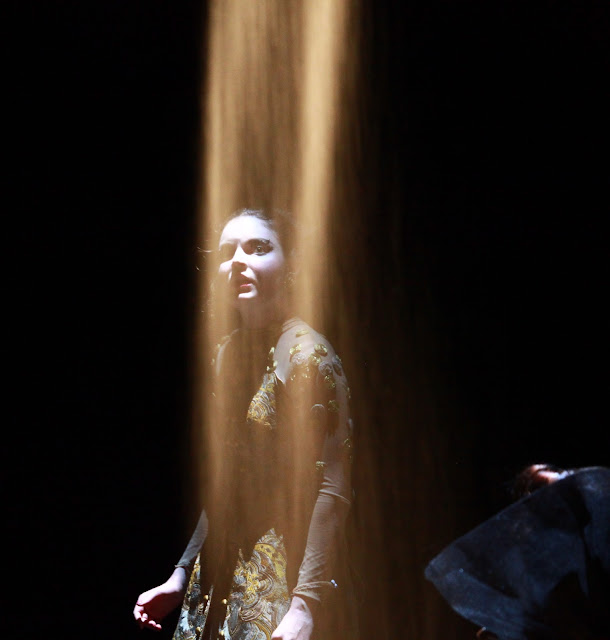 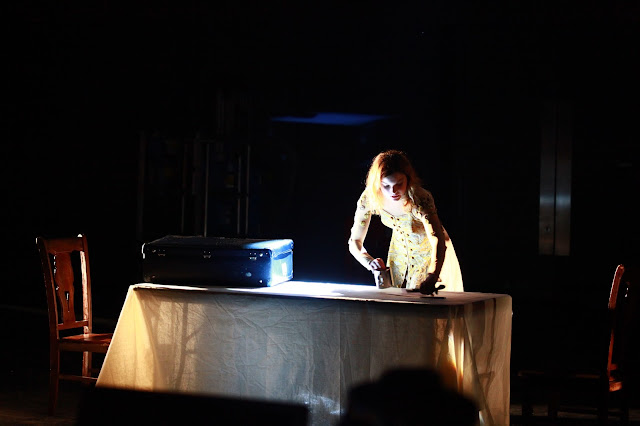 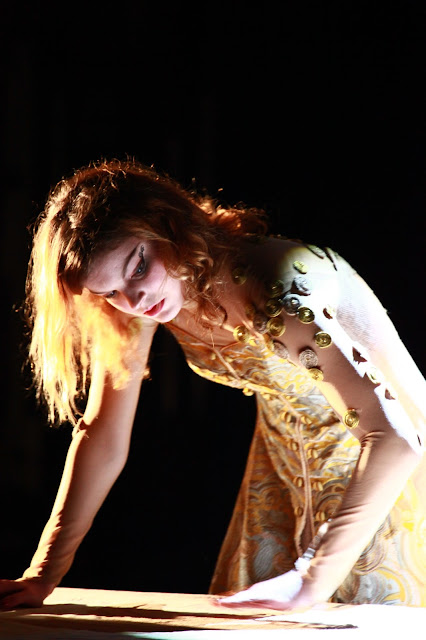 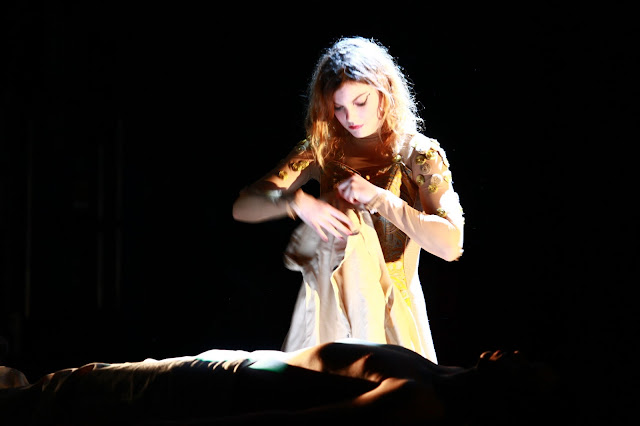 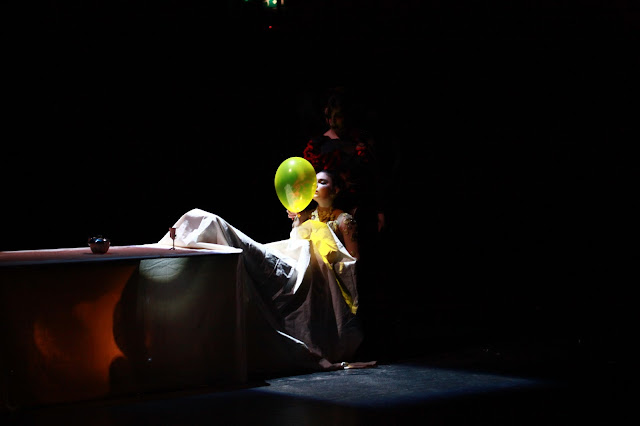 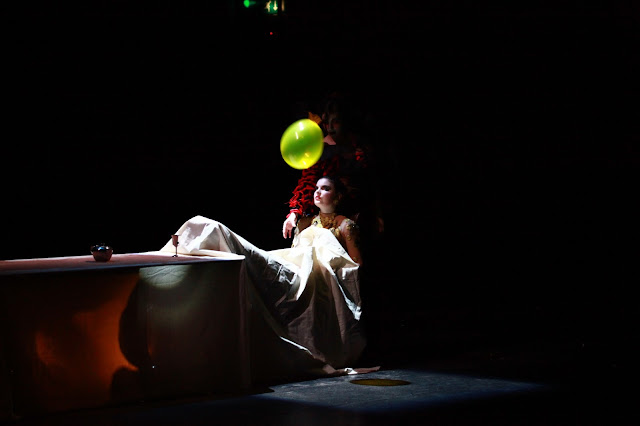 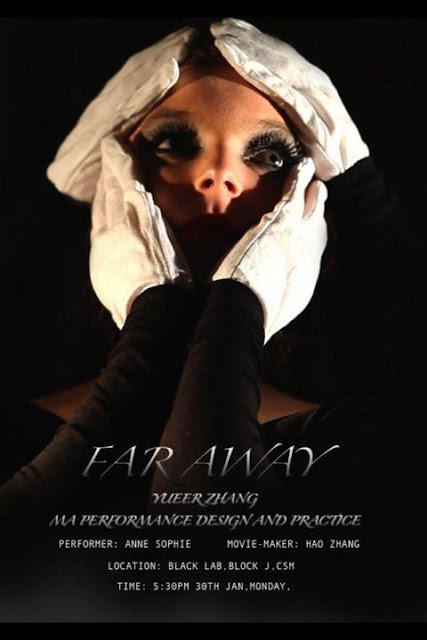 From a visual art background, Yueer doesn't make costumes that only dress the performer and give information about the character in the play.  She thinks upstream where the design is often the starting point of the narrative combining multi-media and live performance.

video of the performance: 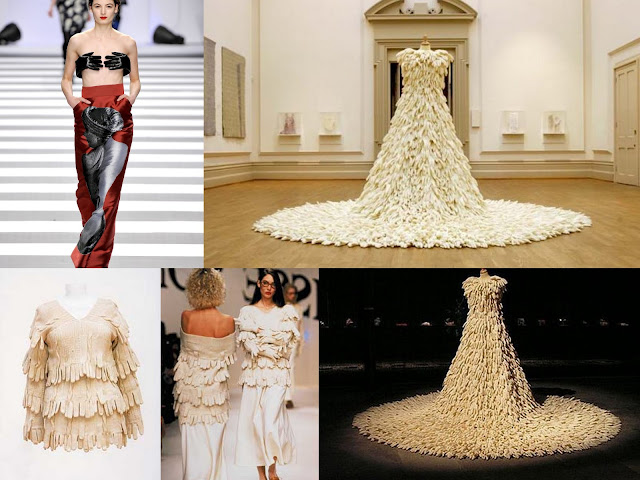 The glove dress made me think about  JC de Castelbajac works and Susie MacMurray wedding dress made out of 1400 rubber gloves turned inside out. She evokes  memories of the body—often a specifically working-class, female body—and its daily labor. In A Mixture of Frailties, the familiar, standard, yellow rubber gloves used for dishwashing and other domestic chores have been turned inside out to create matte white surfaces. The work references other uses of gloves by various artists in the construction of dresses that lie somewhere on the continuum linking fashion, design, and art. 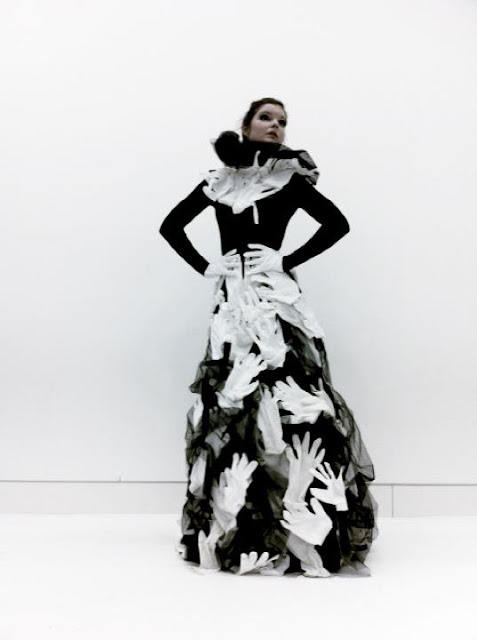 Gloves are a really interesting element to use in a garment. Diverted from their former function of protecting hands, accumulated on the garments, they become the ambiguous sign between presence and absence, animated and animated. Filled with foam, they keep the shape of the hand although they are empty blurring the frontier between fantasy and reality. Because theses anonymous hands have no faces, you feel surrounded by people but at the same time very lonely.