I met Anna after a quite boring lecture, I was about to go but she stopped me and asked me where she could found the dolls necklace I was wearing (so at the end i was happy i went to that boring lecture!)


We decided to make a collaboration together and I felt her dark and romantic universe will fit perfectly with my dolls in order to create a more gloomy  and melancholic atmosphere. I find her picture really "cinematographic", you can imagine a story behind each still image. For me, there is something hard to define about  the"Russian soul" and her model look like postmodern Thekhov's character. 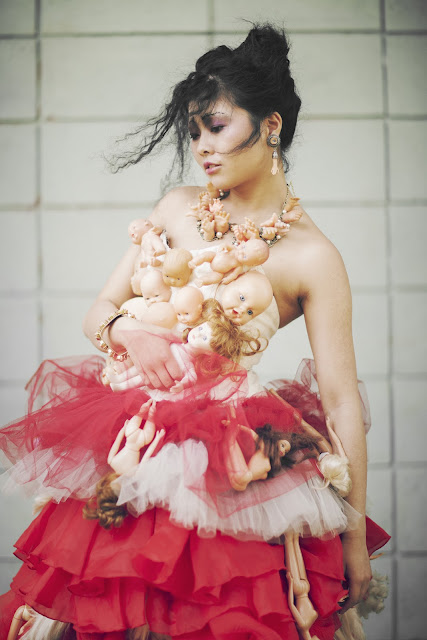 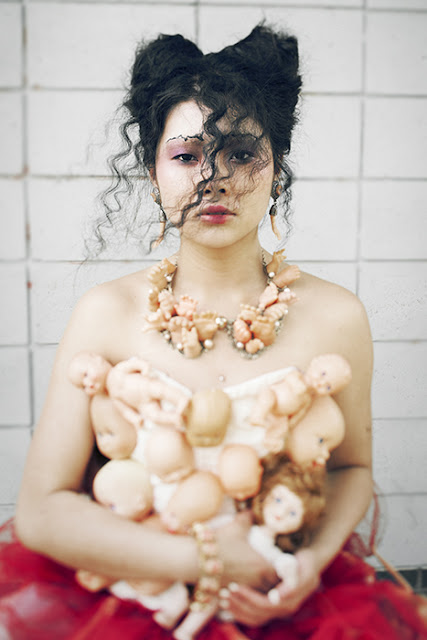 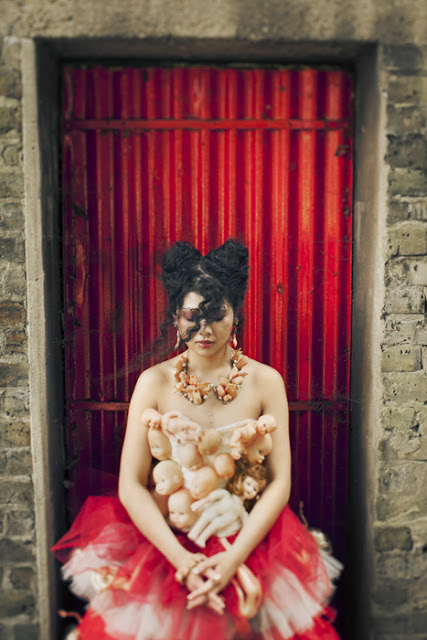 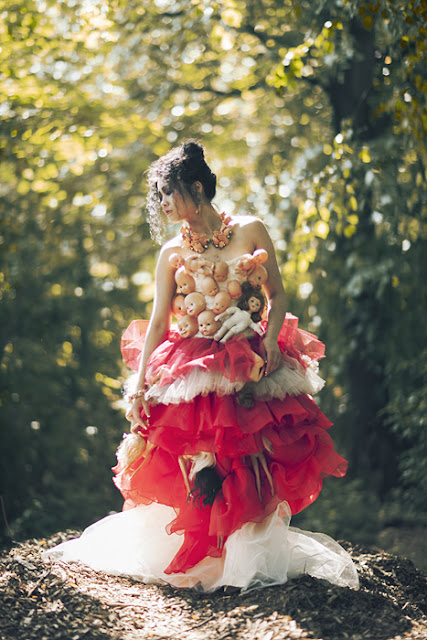 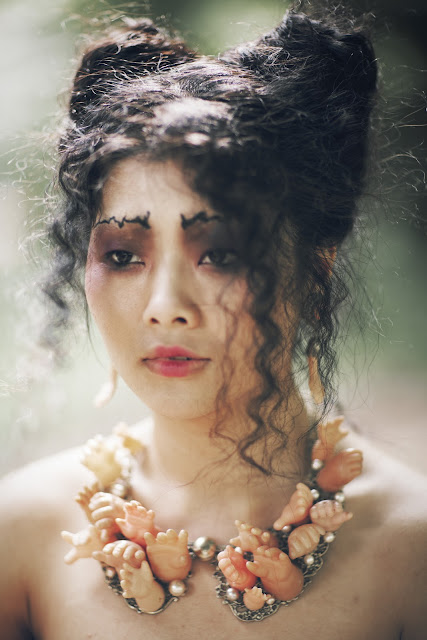 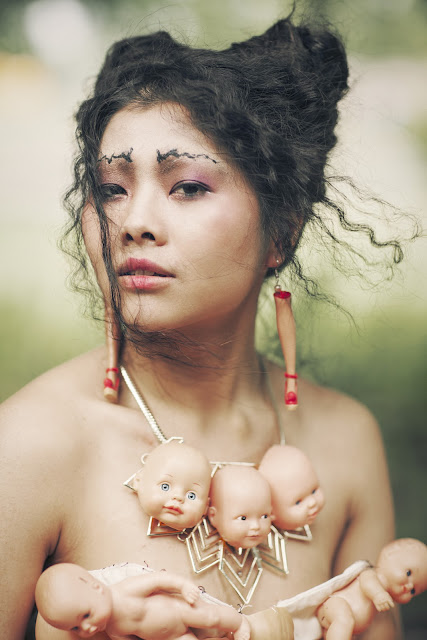 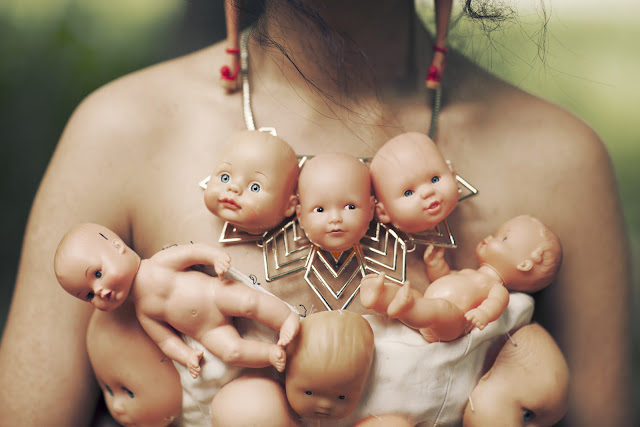 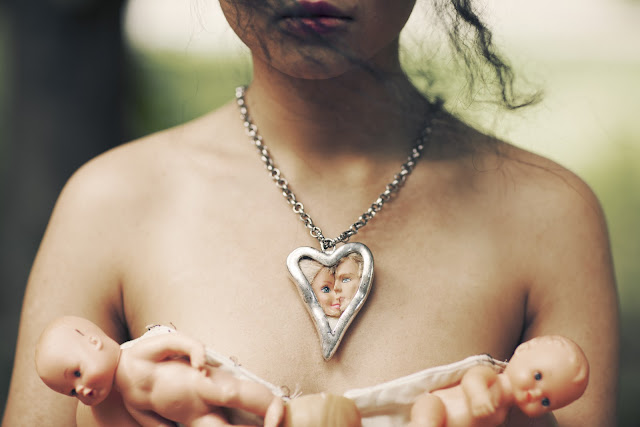 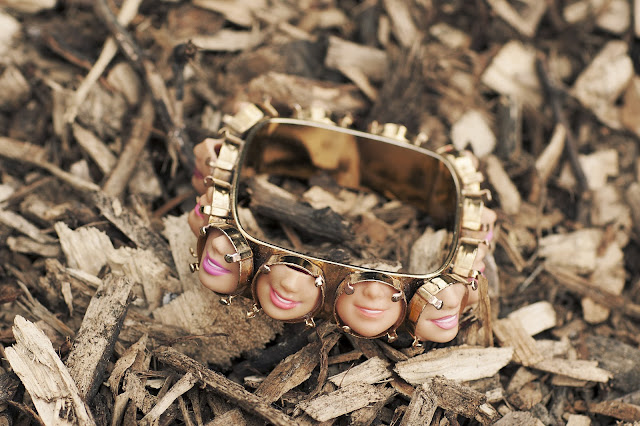 For this bracelet I had to "sacrifice" 12 barbies, to take only the face. I feel a bit like the cannibalistic serial killer Hannibal Lecter or Bluebeard. 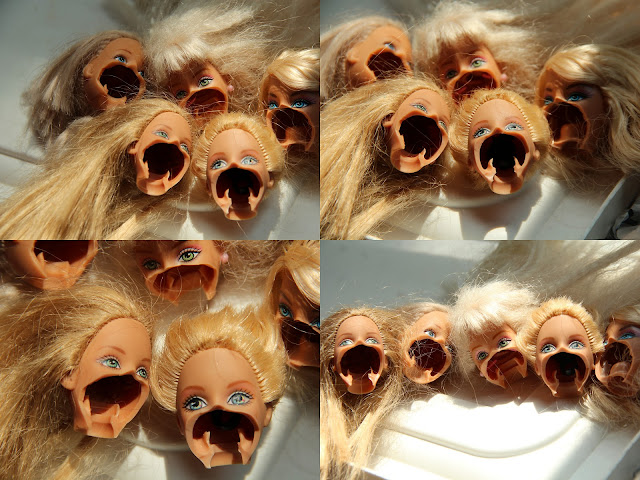 It's a bit like in the horror  movie "Eyes without a face"  where the heroïn's  face was horribly disfigured in an automobile accident and where the crazy doctor Dr. Génessier's unsuccessful attempt to graft her face onto his daughter's. 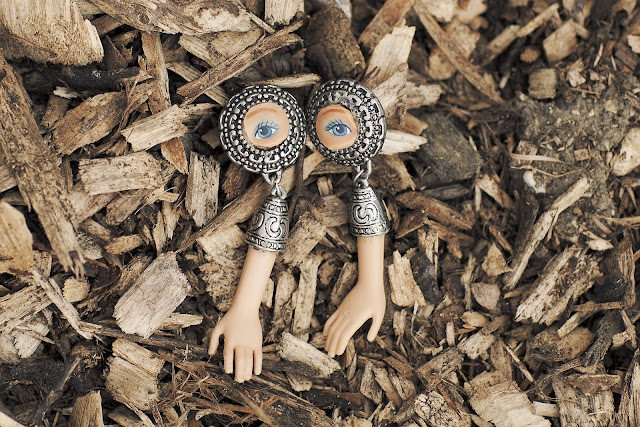 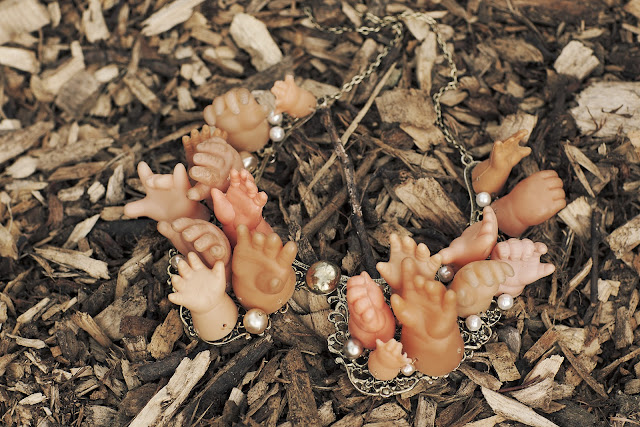 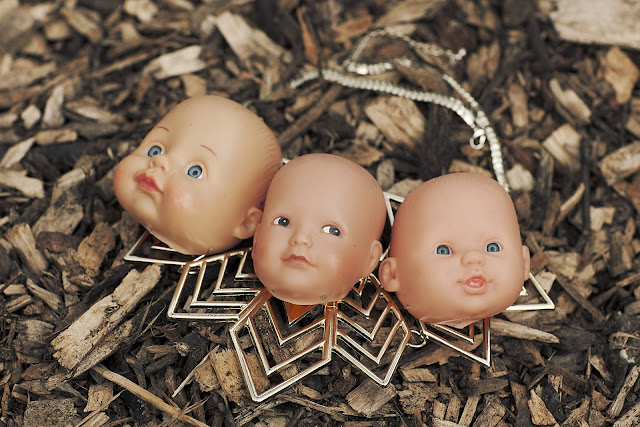 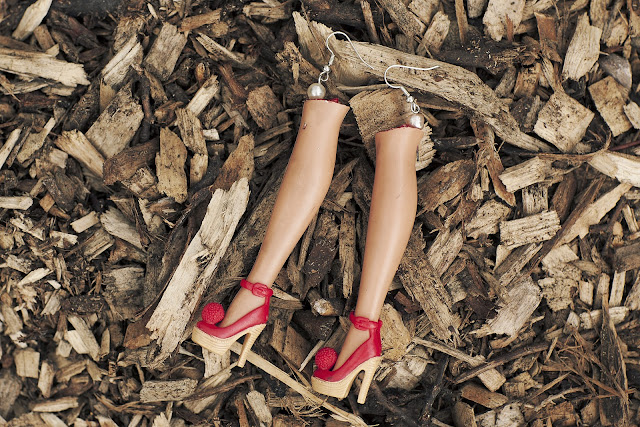 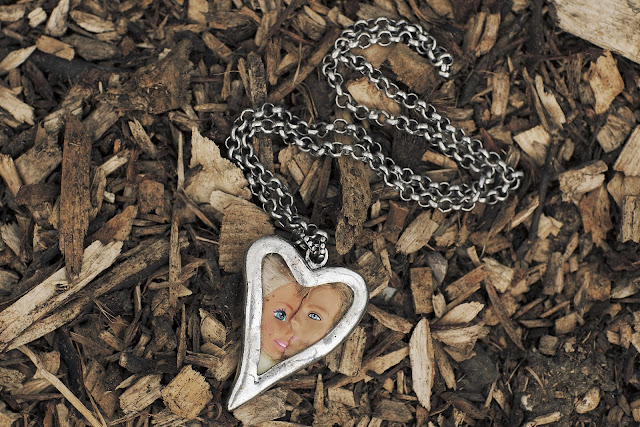 Originally, this barbie dress was a theatre costume for my play "Fernand" that I presented in the Platform theatre of Central Saint Martins as my final degree show.
I like the idea that it's a theatre costume could be used again for a photo-shot. That it is part of story but also can be used independently in another context and generates new narratives. 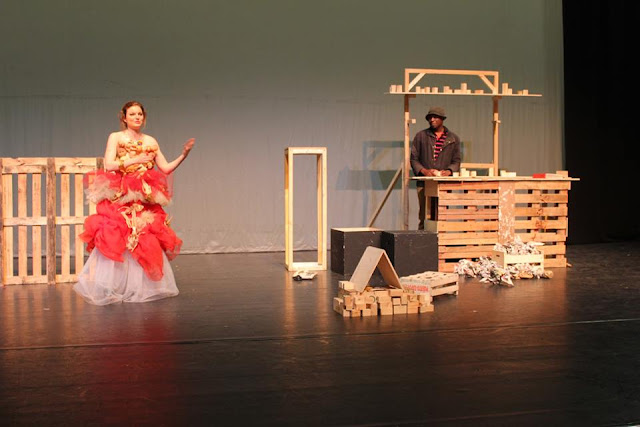 This play is dedicated to my favourite place in the world where i find everything I need for my costumes and jewels since I'm 8 years old.


"It deserves credit...Even a stopped clock tells the right time twice a day… I like to give a chance to objects, it's a bit like people you know, just take them how they are.
You know, I’ve been coming here since I was  8 years old, I love this place, I feel I belong  here in a way, I never know what i'm looking for and what I'm going to bring back home. I don't like objects that you buy in "real" stores, which smell  like brand new plastic. I prefer them a bit dirty, a bit battered by life, they have a soul. They are still part of a story,  A slice of life. You are taking part in a lucky dip  but it's the find which jumps to your eyes, with the tremendous power of a chip pan  splattering in the school playground . The find has poetic beauty that shyly skims across our arm.  It doesn't matter if it's a "valuable" object or a “one-pound purchase". The found  object is not the one that you keep inside a showcase, that you lock up and  look through the haze of your breath on glass. 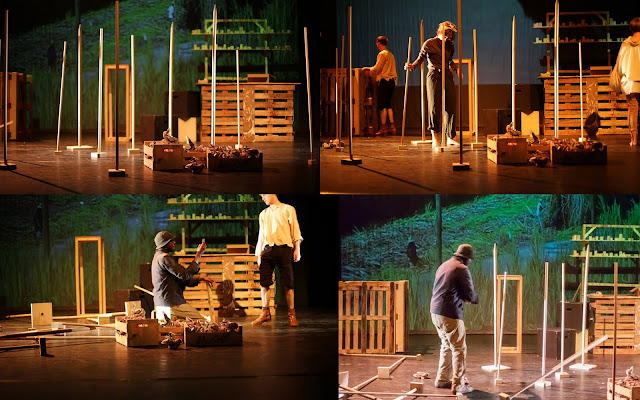 The find, as the name suggests is playing hide and seek. But it's the object who finds us and surprise us, shouting “BOO!” like a sadistic older cousin hiding behind the curtain. You could dream it but you can't design it properly in you mind in advance. It populates the cave of our dreams in the little mermaid kingdom.They are traces of a lost world, a past world, souvenirs that you can bring back from a trip in a time machine. The find moves us. It arouses nostalgia of ourselves. You know, in French we say for a painting with fruits and objects " nature morte" a dead life, but in English it's a still life" Objects have their own life.  they echo each other, break each other,  dismember each other. They make their own system of signs like words that combine and recombine themselves in a poem. I'm hunting the unexpected like the pirate is hunting  treasure.  Life …a constant adventure." 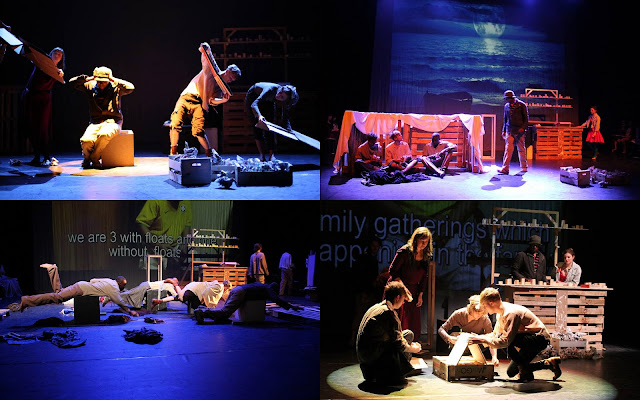 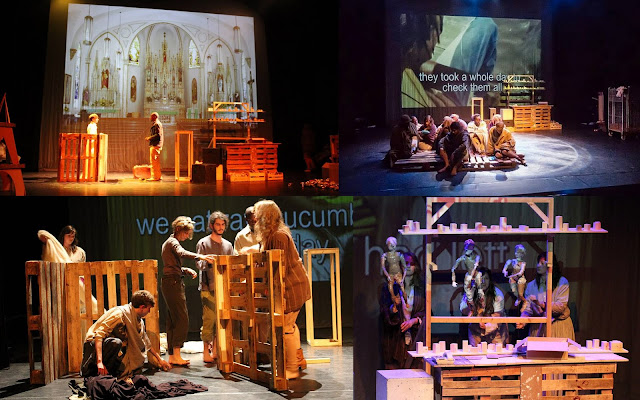 In my play,  performers are more functions than real characters, theatre makers rather than actors, craftsmen of a fable who resorts  to the old tricks  and props of theatre - a pre-recorded voice on a old telephone, a chair that becomes a car, an empty  luggage- to build the fiction at the same time that Fernand is telling his story on the screen. 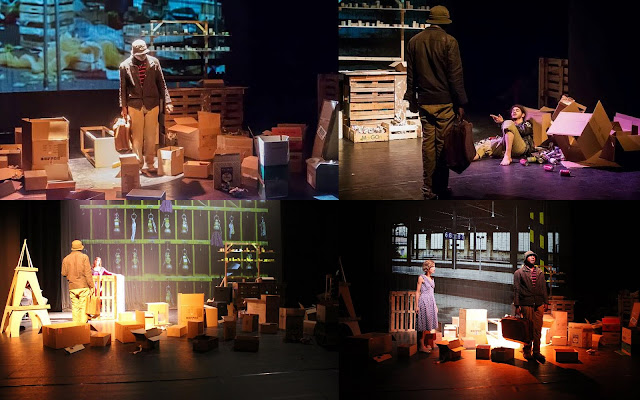 Because the story is true, nothing need to be pretended or concealed . The charity shops becomes a church, a sugar cane field, a train station over the course of his adventures.  This transformable set open possibilities and  recycles itself like theses second-hands objects which find  second life within Fernand's hands.  Sourced directly in the street and in  trash,  i collected it as an urban gleaner who just have to bend down to collect the leftover of society.  Raw material on which the imagination of the audience can project the story. A "poor theatre" where having nothing becomes a strength and pushes us to be resourceful  and creative, like in the process of this play,  only made with the wonderful energy of being alive. 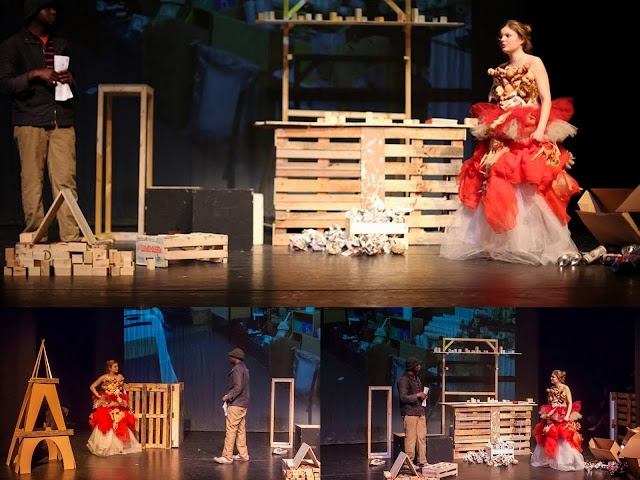 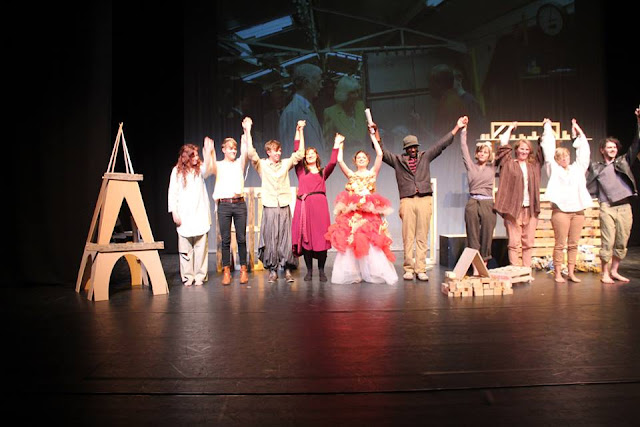 Georgina Leopardova, a promising art director, organised this photoshoot, inspired by tim walker aesthetic with the really talented photographer Lorenzo Cisi who was able to  recreate this dark fairy tale atmosphere even with frozen hands!


Hanna Gaskin,  the make up artist made this amazing make up inspired by 2007 japanese Dior fashion show to create a kind of gothic Geisha.

From our Facebook conversation  when we were talking about the concept:
" Just want to create an illusion that even you are not from this world. Because you and your dolls belong to somewhere else".


We went to Hyde Park on one of the coldest day of the year -and barbies look good but don't keep you warm!