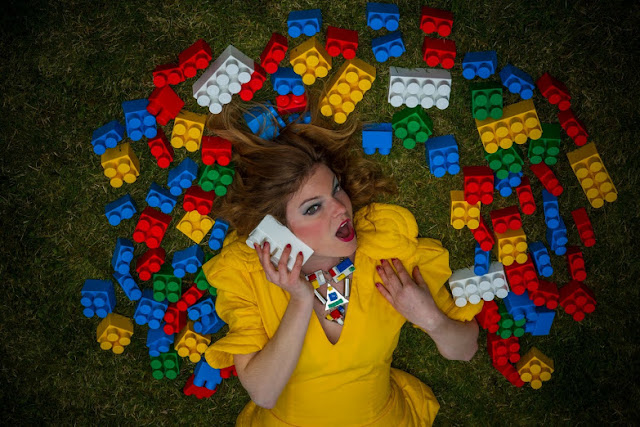 When you order lego bricks on their website, the headline is  "The only limit is your imagination!"  which sounds like a great challenge for your creativity! 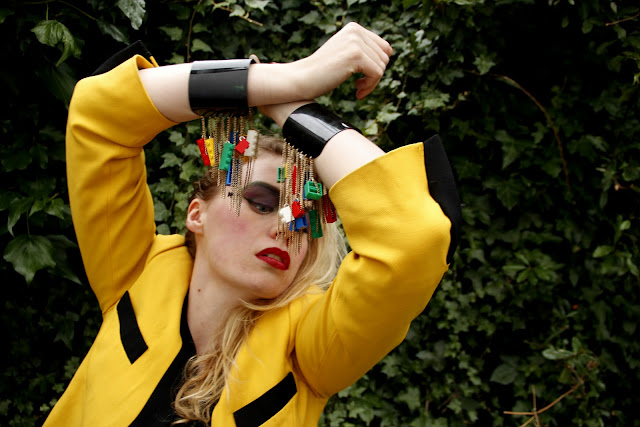 With these bracelet, I experimented with chains to create decorated metallic fringes playing with the multiples creative possibilities of lego material, at the same time, fixed and movable, gems and charms. 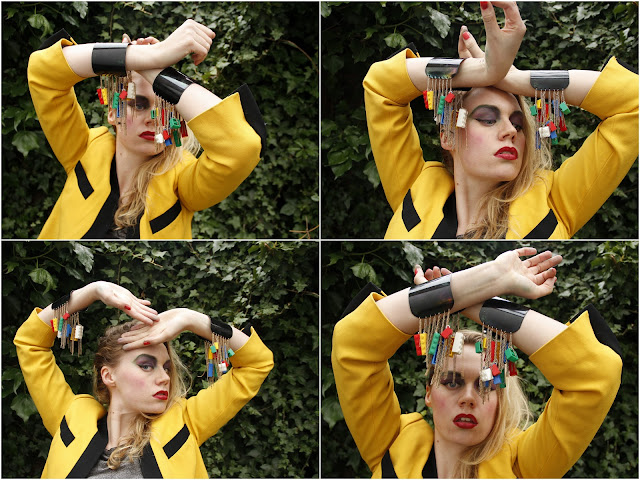 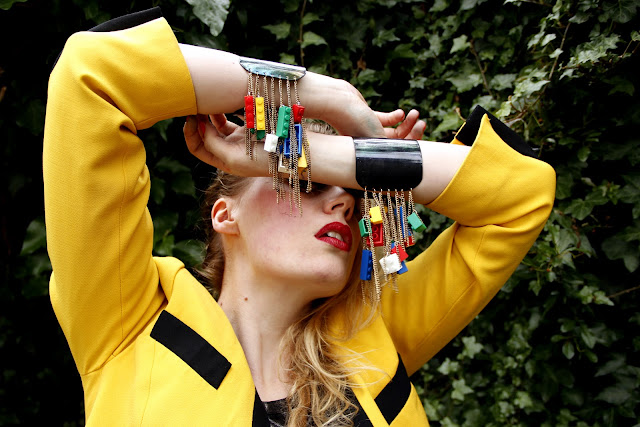 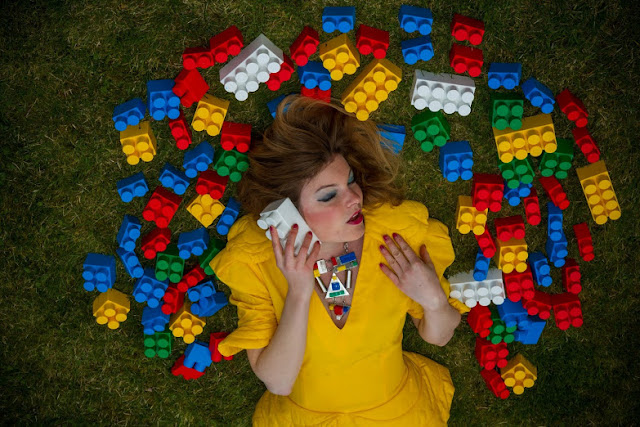 One lego a day keep the doctor away
A rolling lego gathers no moss
don't put all your legos in the same basket
It's very hard to shave a lego
Lego is the sinews of war
Lego doesn't grow on tree
There are plenty of lego in the sea
Two legos are better than one
...
you can complete the list…(it works alos with french proverbs!) 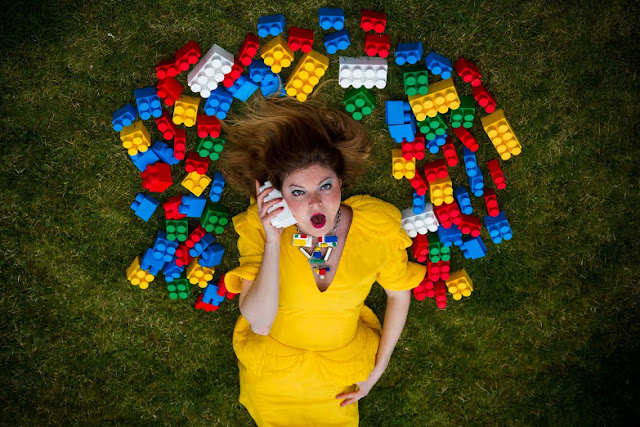 My dad brought me thoses pictures from his trip to Sao Paulo. Melissa, the shoes brand had teamed up with LEGO and using over 700,000 pieces have come up with a conceptual, colourful lego facade inspired by the Melissa  Rainbow collection…creating an  amazing lego staircase. 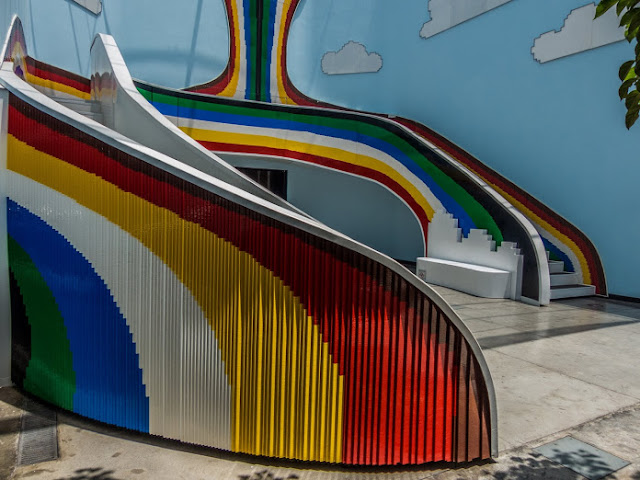 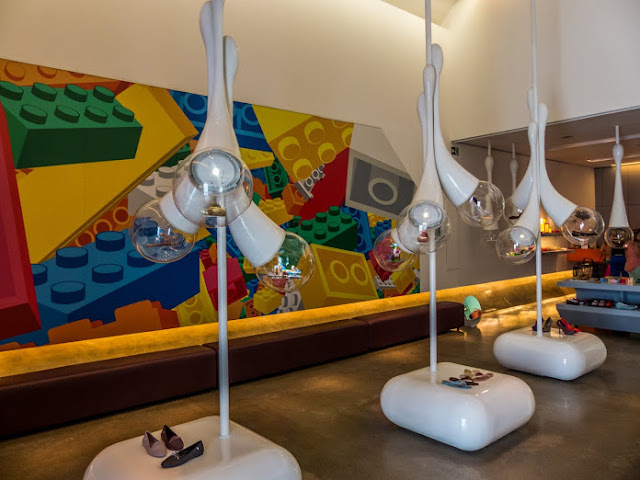 I like to have feedback on my necklaces, that people give their opinion or impressions about it.  Most of the time , it's something you didn't think about when you made the piece, as if the meaning always escaping from you when the work is done. One of my friend told me it referred for her to the Italian futuristic design of the After-War, and my Dad thought it was inspired  by Aztec aesthetic. Anyway  i like both interpretations.
What is yours? 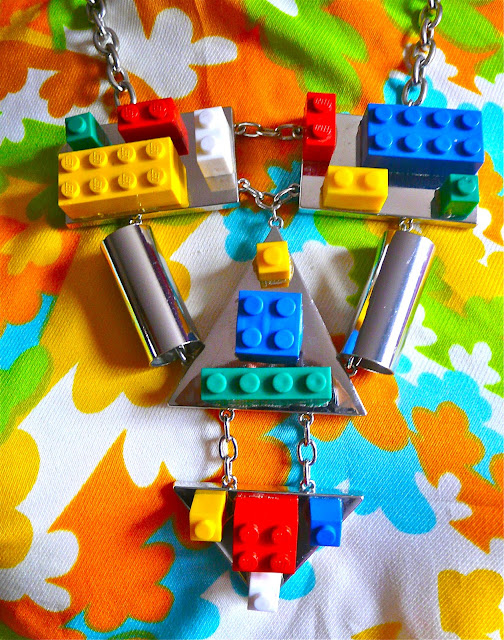 For a workshop with my MA in Polverigi (Italy) around the notion of site specific performance (performance that you create from a space) I involved my last lego necklace into my "site specific installation". 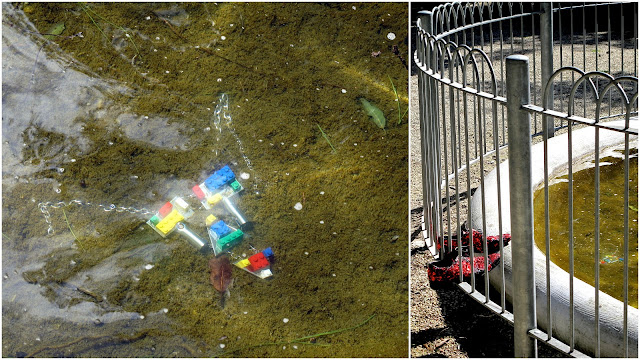 I placed it in the fountain of the park of the villa where we where staying. (at least now i know that it is waterproof!). The distortion produced by the swirl of the water and the reflection of the sun on the metal combined with the vivid colour of the bricks created a really strong image. 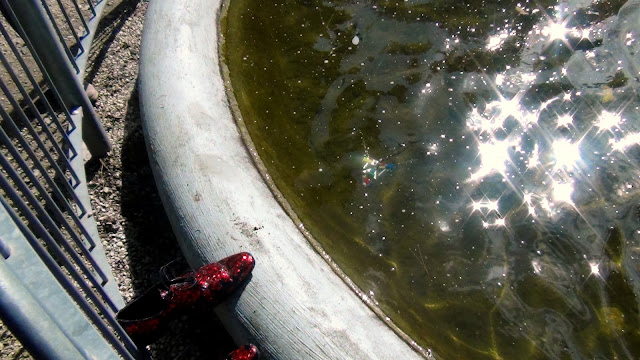 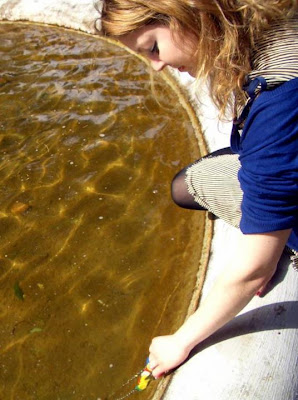 … the only problem is after you have to take it back…

I realised a "fine art necklace" for my friend Veronique, she saw my fine art costume and as a fine artist so she wanted to wear something that reflect her personality and something about herself and her background. 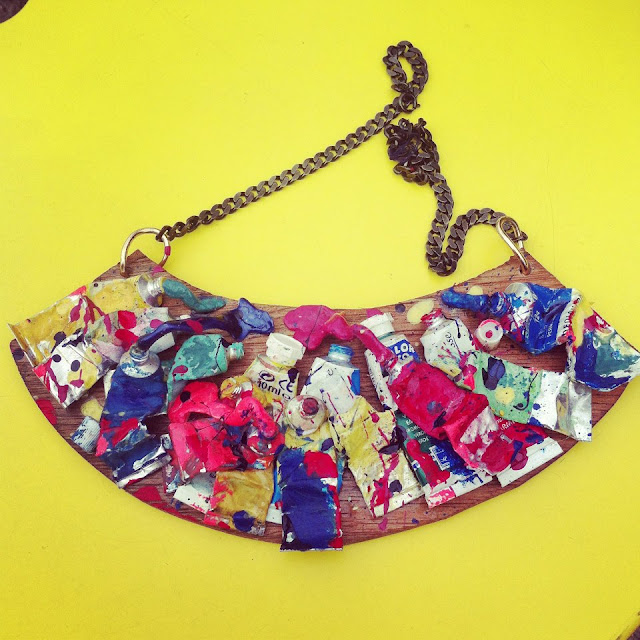 To create this plastron I got inspired by palette where the painter mix his colours. I like the really dirty ones, where all the accumulation of different kind of painting create a kind of sedimentary layer and reflect as a negative version, the work in process on the canvas.


Fine art is not my main interest in art, but what i like to watch when i'm going to a painting exhibition, it's the work on the materiality of painting, the superposition of layers, the movement of the brush on the canvas like the tangible trace of the painter's ardour . Sometimes i even like to watch painting from profile and see depths and reliefs, the thickness of the painting at the meeting point where painting becoming sculpture.
With this necklace I get inspired by the painter Eugène Leroy which resorts to the impasto technique initiated by Van Gogh, using a superposition of painting layers. 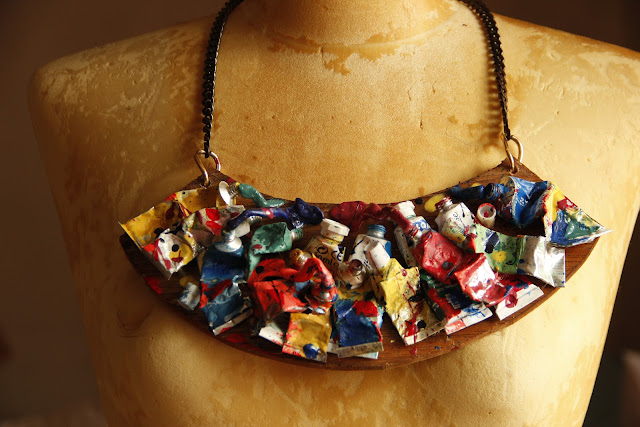 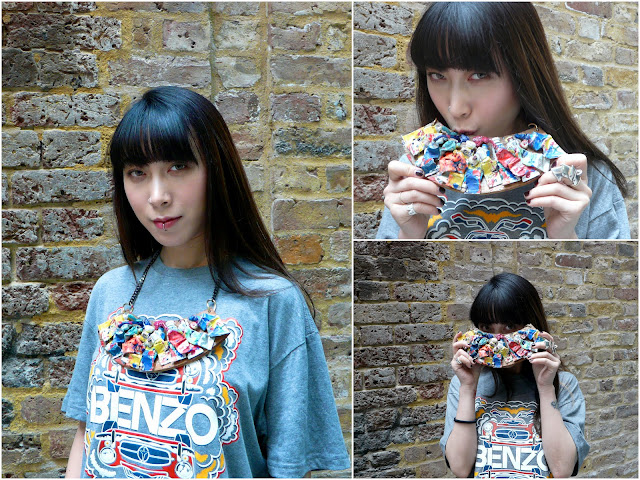 Veronique: "I guess, i'm not wearing the right t-shirt today, the pattern in confusing with the necklace, tomorrow i will wear something more simple with it". 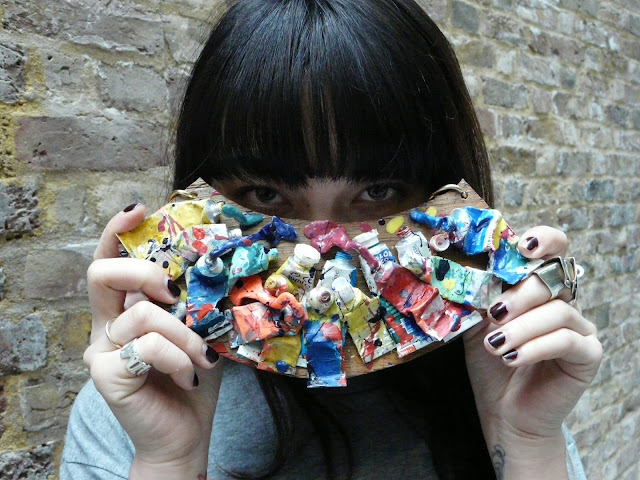 I like the fact that the jewel becomes the master piece of the outfit and not the accessory anymore.  Because those kind of pieces is so strong, you don't match it with your clothes, but are looking for the right outfit to match with the necklace, it's the other way round, the accessorie rules the whole ensemble.

I created this "keys jacket" for the show Danièle Imara in Jail, march 2013, a show dealing with the topic of prison based on interviews and personal experience involving videos, projections and music performance.
I had to design it for the warden of the prison. I get inspired by the video clip Telephone where Lady Gaga evolve in a surreal and glamourous prison environment. The idea was to make it non- realistic and really over the top in order to avoid to deal with the subject with a miserable point of view, that obviously you don't have to take at first value. Because in the collective imagery, warden alway carry theses massive key-ring, i found it interesting to move theses key on the jackets which become a fashion accessories as well as a prop. 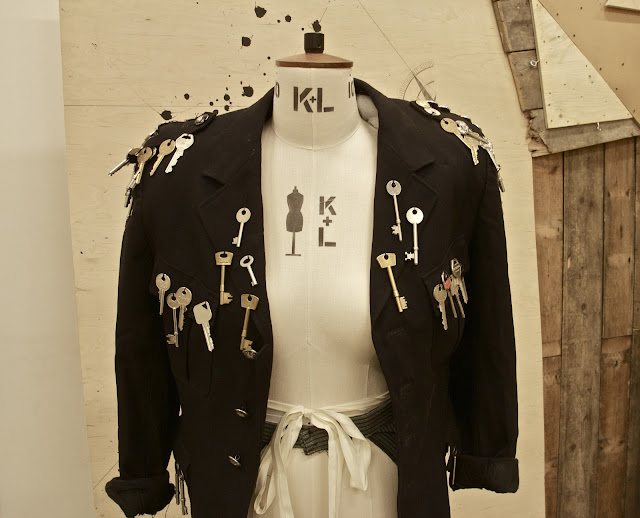 Having a project in mind change your way to see the world, from the moment I know i had to make this jacket, i started finding key  on the road while i was cycling (key that i wouldn't have noticed if i didn't have this design in mind). 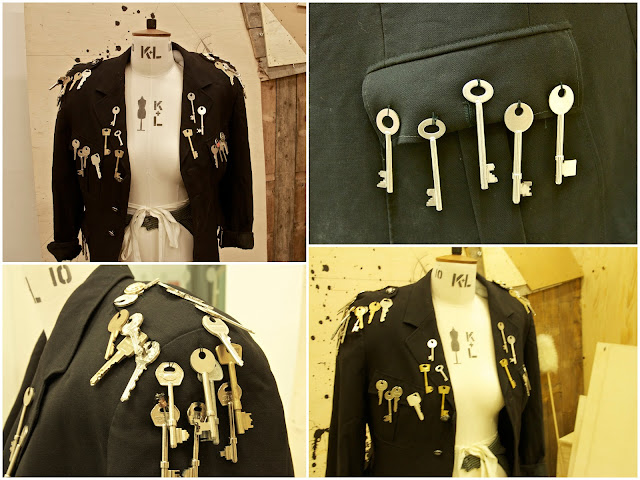 To collect more i went to the clobber at the corner of my street, and asked him if he had some spare keys that people don't use any more for putting on a jacket. He found my request a bit strange  (i guess not every customer ask him key for putting on theirs clothes) but, he told me, amused, that he was going to put them aside for me, and the next week he told me "this is your lucky day" giving me a massive amount of key. So now in my neigbourghood i have the reputation from the shopkeepers of being the crazy girl that collect every kind of object to make clothes!
Then I have to stitch the key one by one on the jacket (paying attention of not mixing up my one key with the spare ones and not having to unstitch my key house from the jacket!) 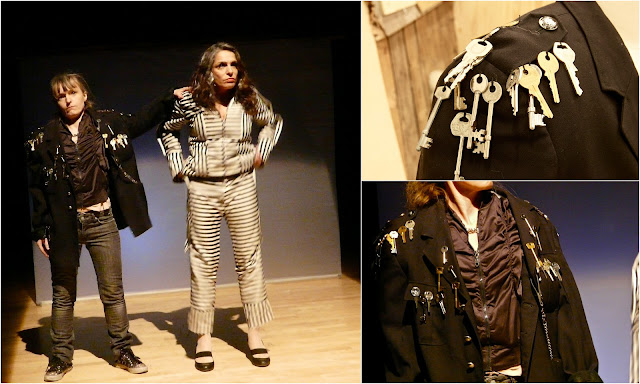 Making a lovely metallic noise, it was a great element for the performer to play with, and by the shaking of the jacket, contributed to add a rhythm to the music piece. All theses keys made the jacket really heavy but fit with the character that had to embody a kind of authority, giving another density to the body and the movement of the performer.
Publié par Anne sophie cochevelou à 09:29