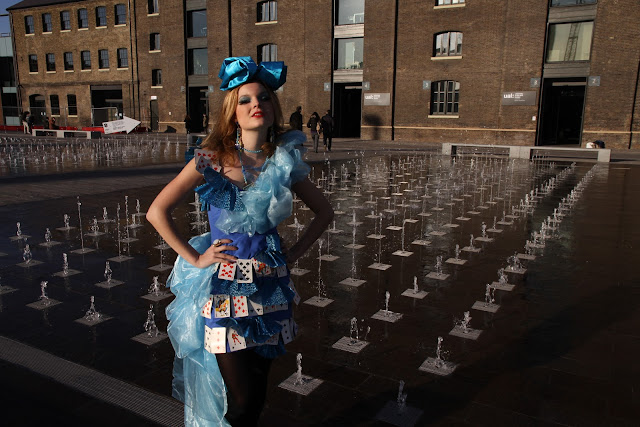 Alice in wonderland universe fascinates and inspires artists in general who rewrite it, revisit it  and takeover it. The original novel is full of symbolism and I guess  the theme  of the quest of identity and the crazy surreal  fantasy  world of levis Caroll (probably created under the influence of some illegal substances) inhabited by weird anthropomorphic characters  inspired a lot of film adaptations  from Disney to Tim Burton.
I performed Alice in high school for an adaptation that we wrote ourself, there was a lot of choreographies but I was so bad at dancing that we shared the role with another girl, I was also playing the queen of flower (it was quite a nice part actually). 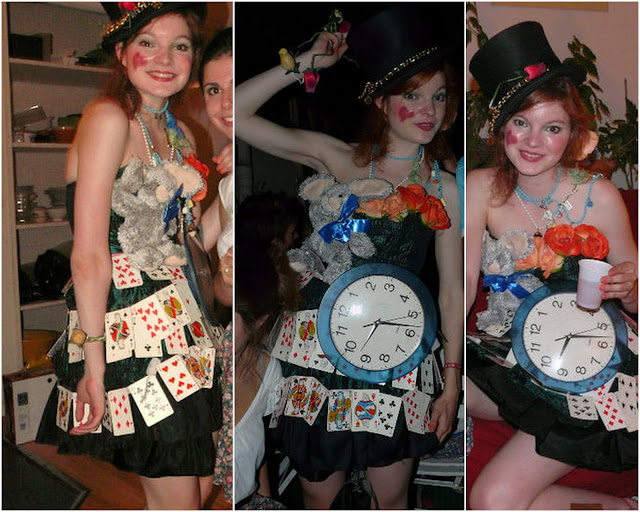 For a theme party more than 2 years ago "the country of your choice" I chooses to be the wonderland of Alice, with cards, flower, clock and wooly toy rabbits. 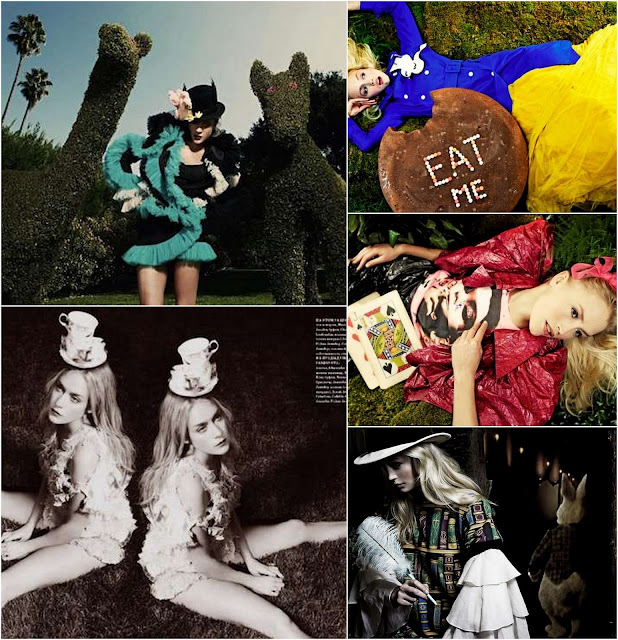 Alice has proven immensely popular and feeds a strong collective imagery through for example  John Tenniel engravings  and inspired similar heroines in literature and pop culture as well as the fashion industry. 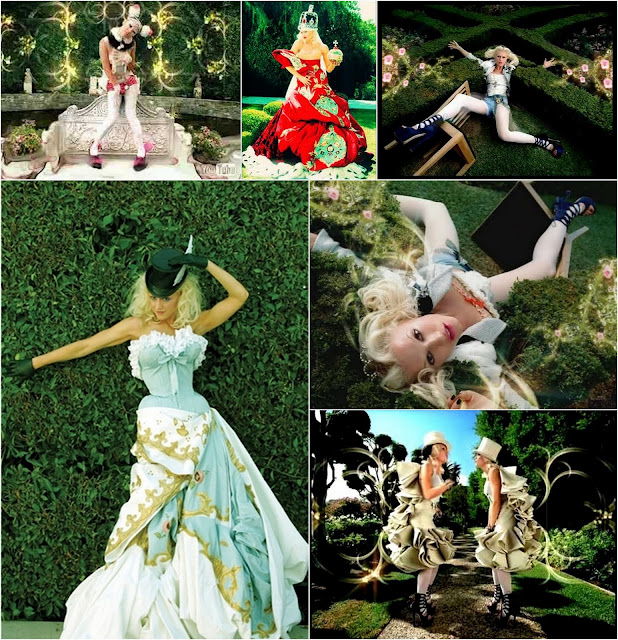 Vogue Magazine US,  2003  Annie Leibovitz. where the most famous designers embody Alice in Wonderland characters. What i like in this shoot is its very theatrical, with a succession of tableaux which recreates Alice narrative. 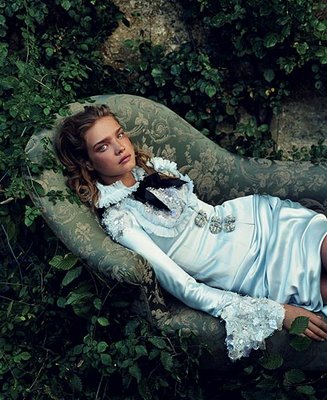 The department store's Haussman Boulevard location in Paris, showed the interpretation of Alice's and the Mad Hatter's costumes, executed by nine up-and-coming designers. 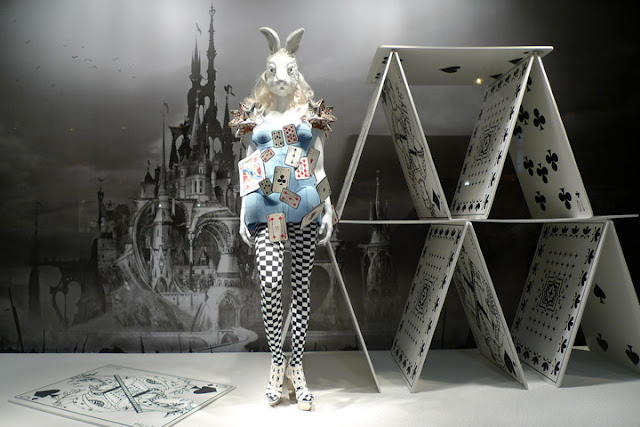 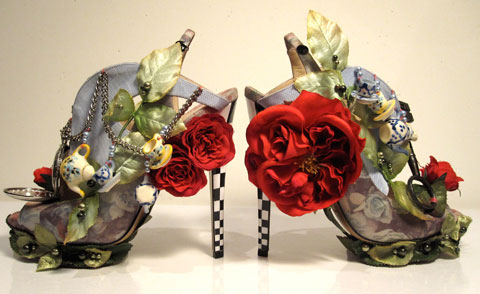 Shoe by Nicholas Kirkwood, for the March Hare with checkered heels, pocket watch, miniature teapots and cups hanging on the chain.
I'm currently rehearsing a modern version of Alice, a multi media performance, including projections and videos. In this show, i'm a girl named Alice who works as a librarian and who is really unhappy in love. Actually the narrative picks  some elements from the original book, but not the whole story…don't want to spoil it... so can't say too much! 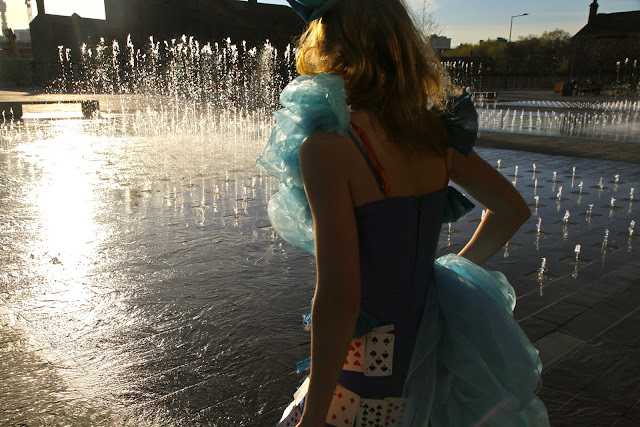 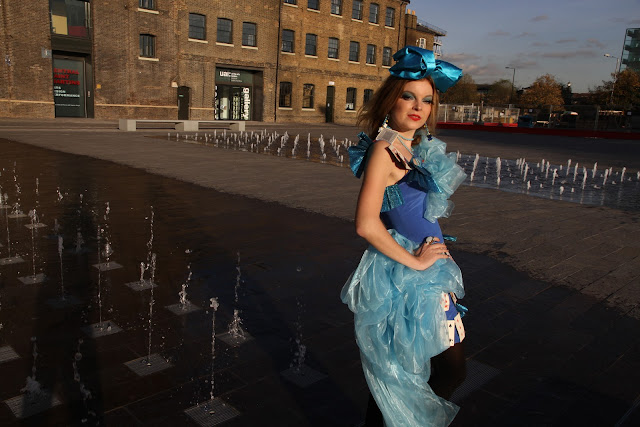 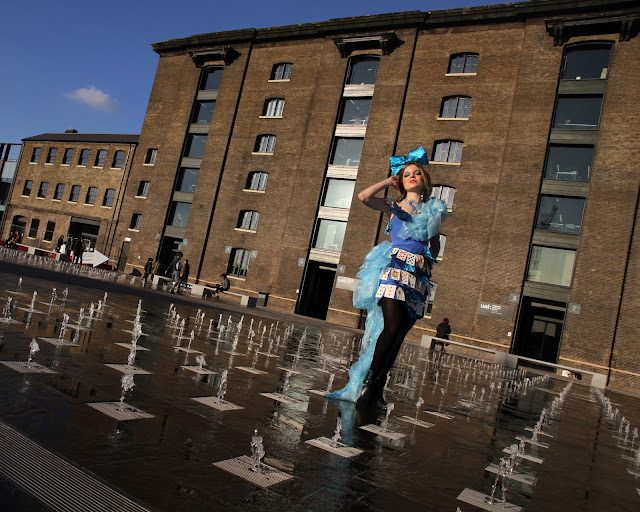 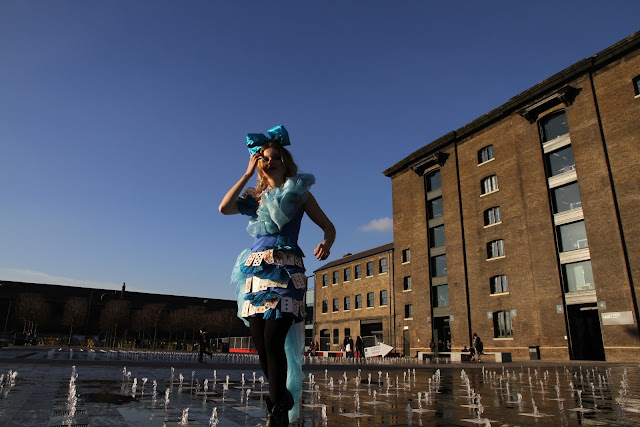 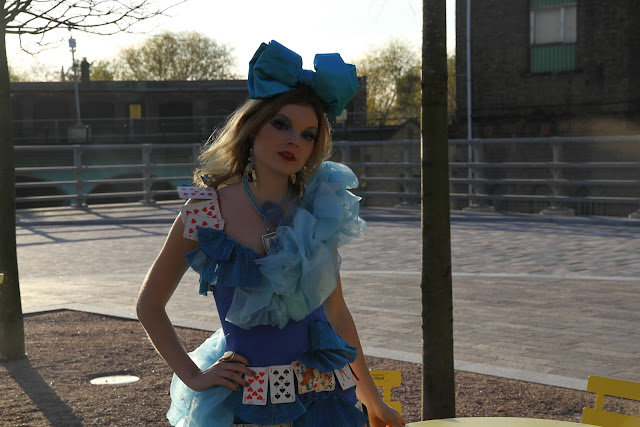 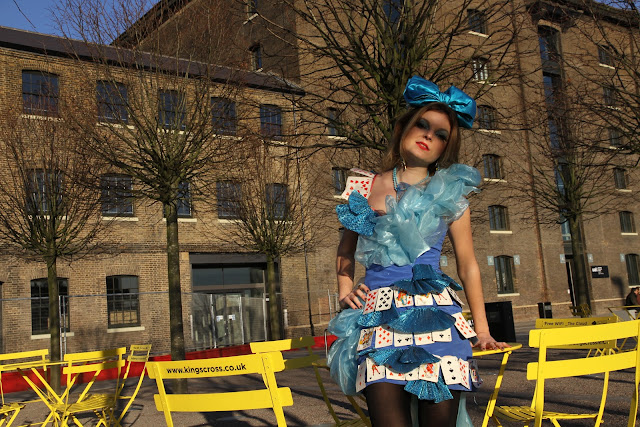 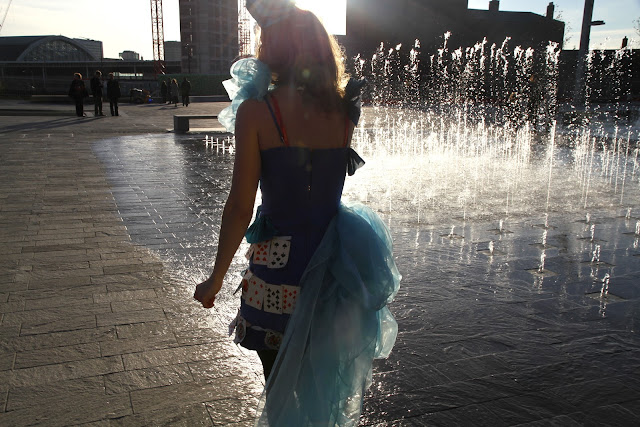 For the dress, I wanted to keep the blue colour like in disney version and add the card element in order to play around the dualistic personality of this particular Alice who has also the evil side of the queen of hearts. Working with cards was quite the same than working with the book paper dress, it's quite a fragile material, you have to be careful not to fold it when you sit! 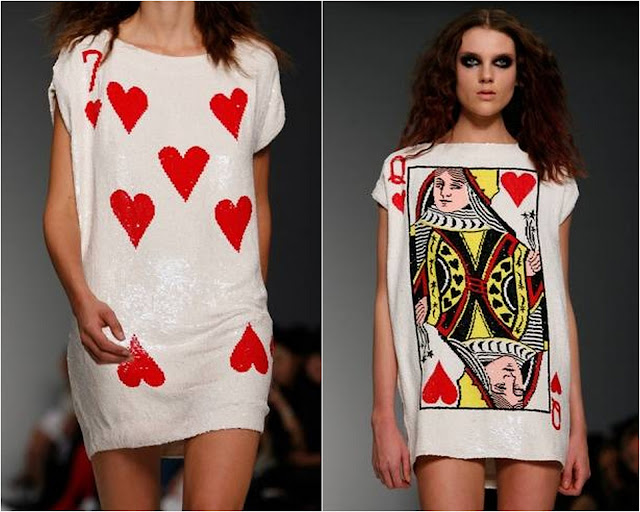 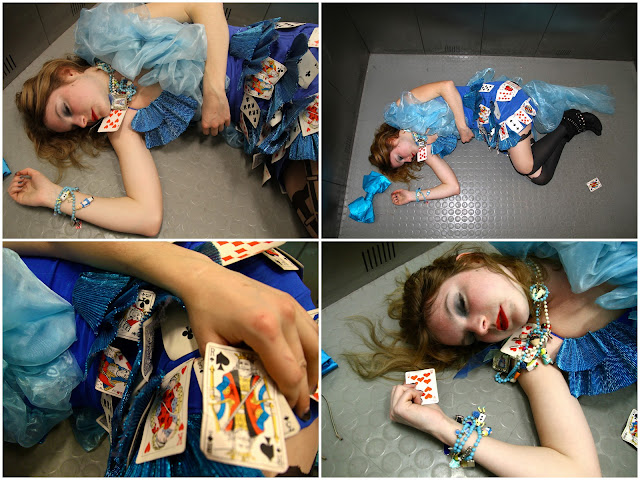 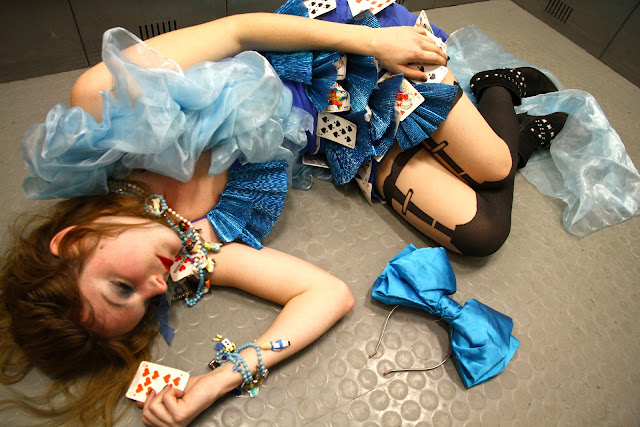 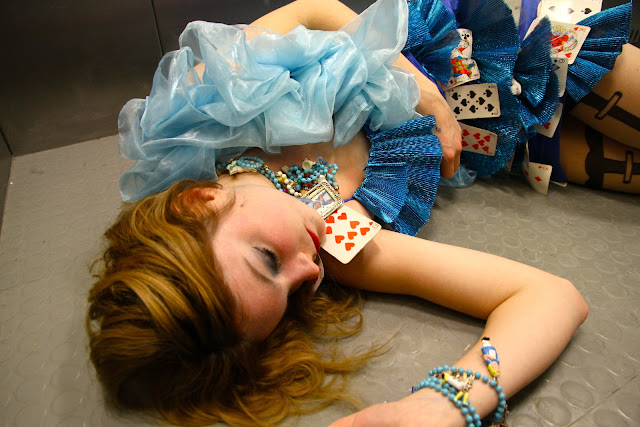 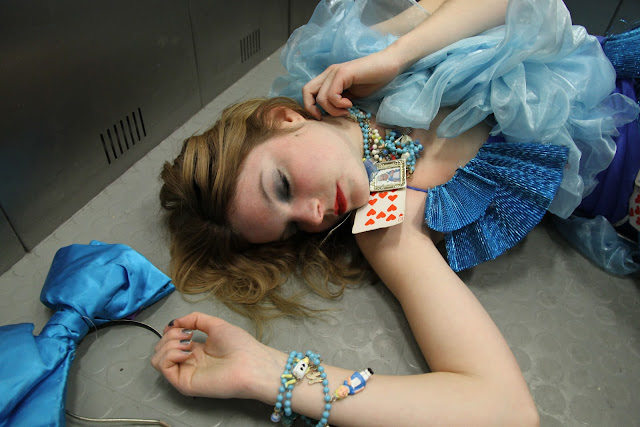 We needed a lot of footage in CSM elevator, at the end I couldn't stand the robotic voice "going up/floor 3 "ting" anymore, people going into the elevator just to go to the library were very surprised to find Alice in wonderland inside. Even is CSM is an art school, we honoured the crazy reputation of PDP people, considered as the freaks of the weird people of the school. 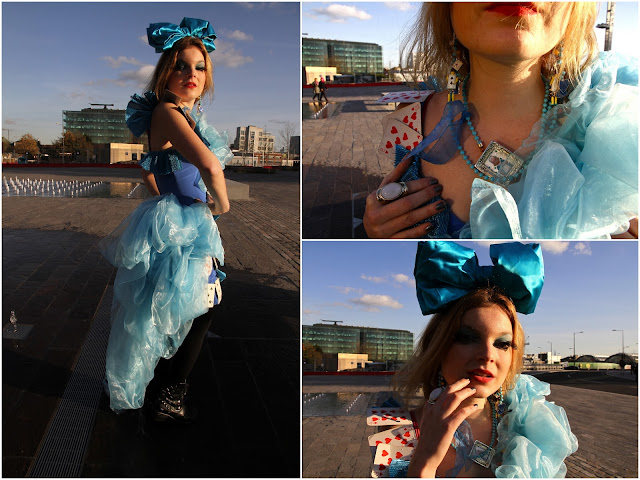 I'm wearing all my Alice in wonderland N2 jewels,  (i have quite a nice collection). For my 18 birthday, my mother gave me some money to buy a watch and an I come back with this necklace… 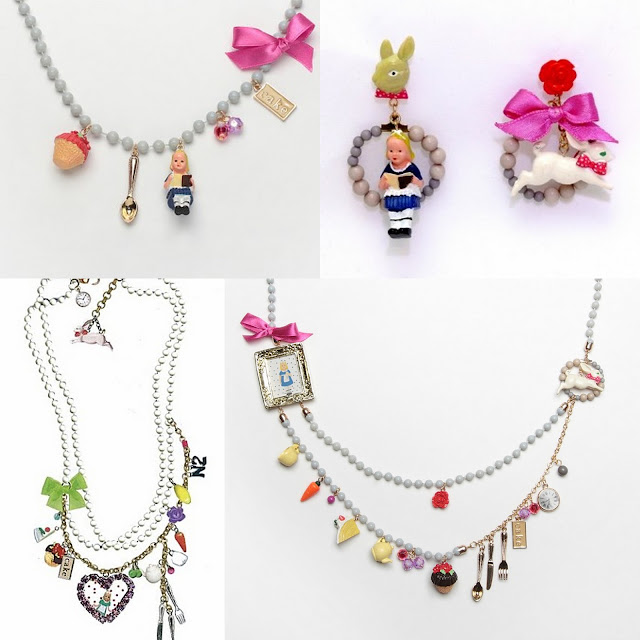 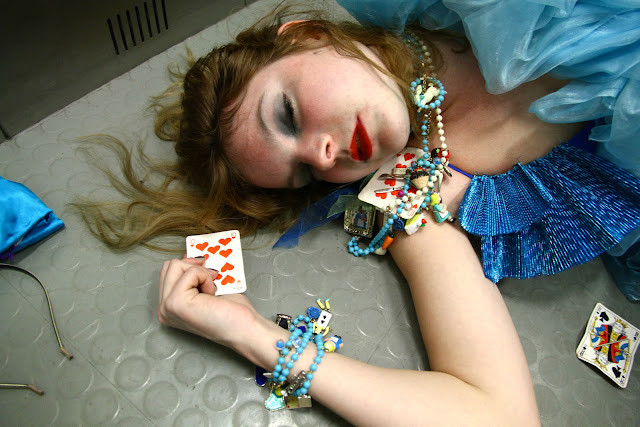 They made all the the fairy tales including cinderella, little ridding hood, snow white…everything is there,  the rabbits, cards guards, tea set, the letter, the the clock…it's simply adorable.