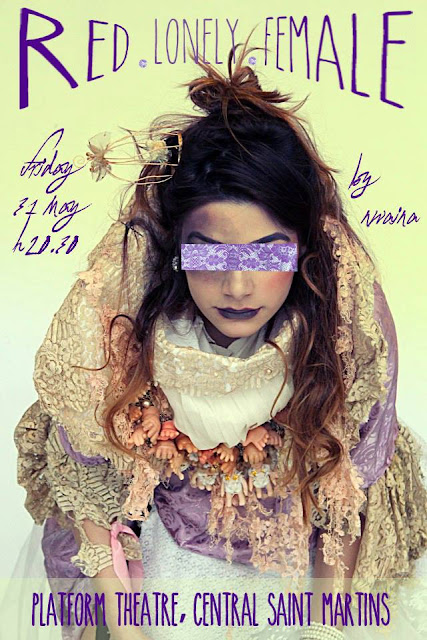 I made this costume for the Lady in Pink video clip. And Ioanna worn it in her show final degree show  "Red Lonely Female" in the Platform theatre. It'  always great to see a costume you made  come alive on stage. It is completely  transformed by the lights or the set which complete the costume. 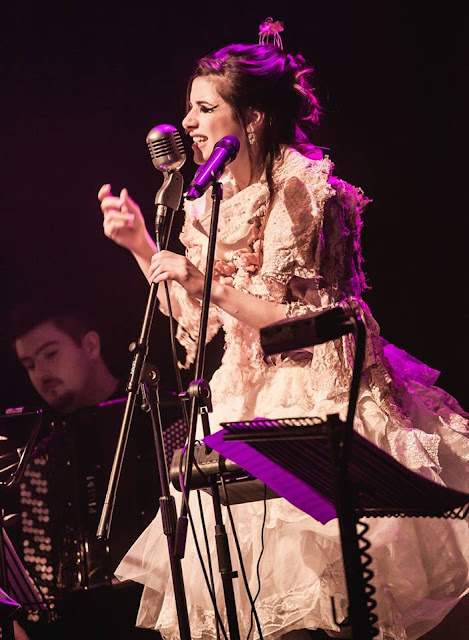 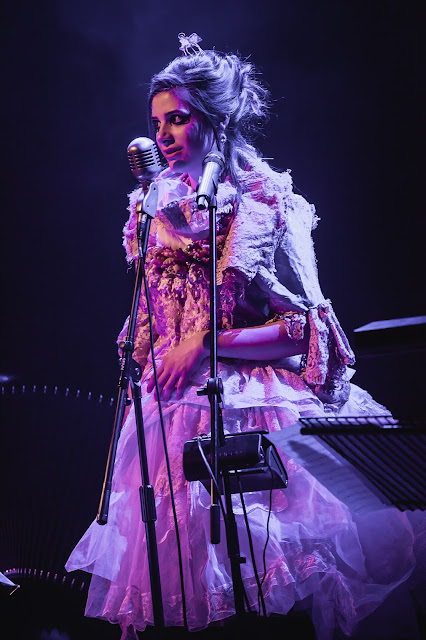 It's quite different to work with musician than with performers, You deal with different constraints like  "Sorry Sophie, I can't play the guitar with this massive barbie necklace) "… and you don't create a character like in theatre but you have to magnify a kind of persona which matches with the musical identity of the artist. 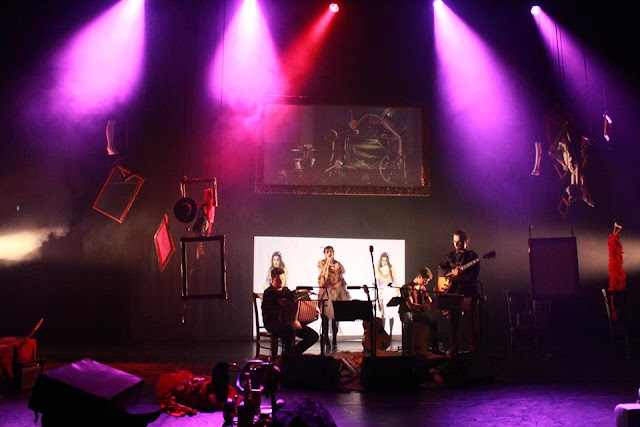 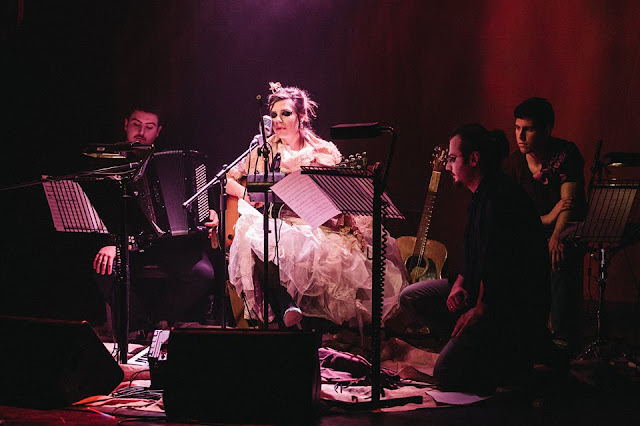 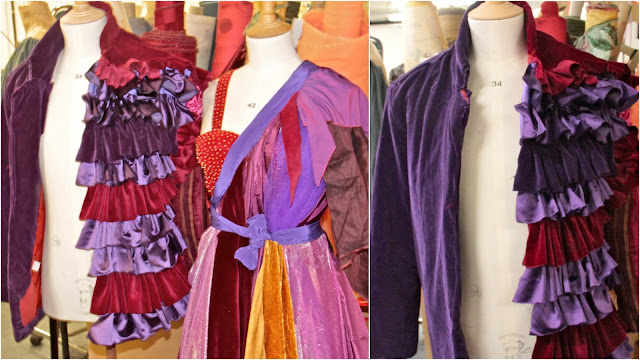 At the beginning this jacket was designed to represents a schizophrenic dualistic personality. So i devised it up in to sides with too different colours and two difference textures (velvet and pleats). 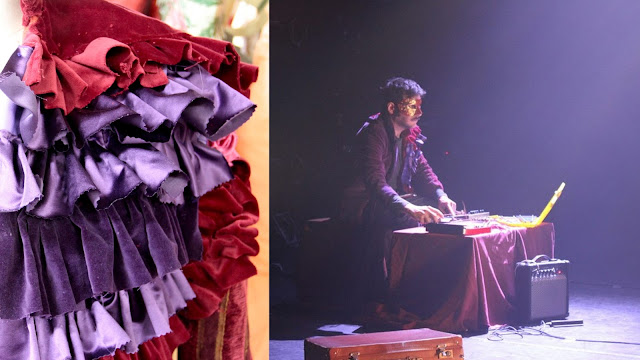 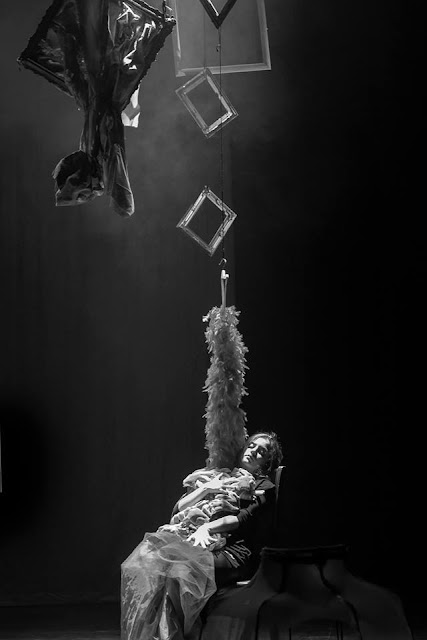 In the show the dancer doesn't wear the dress but worship it,  take care of it, dance with it, and finally destroy it. It is made with orange gloves to symbolise manipulation and social oppression.  I like the idea of having the dress as a prop or a kind of installation part of the set. 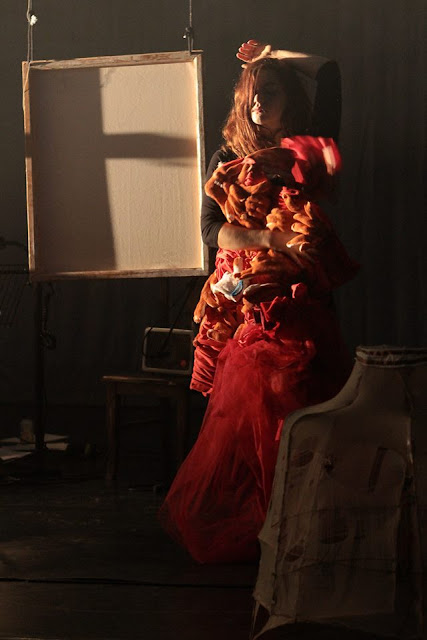 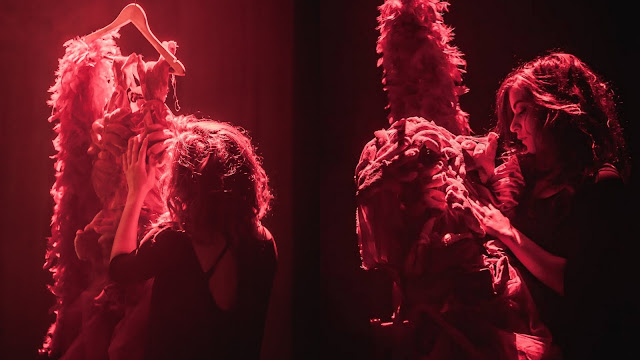 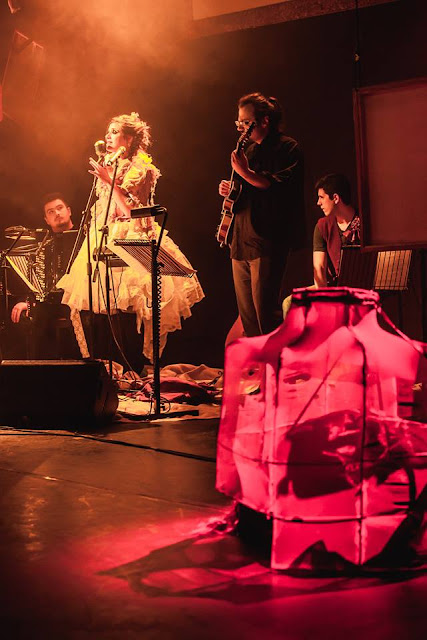 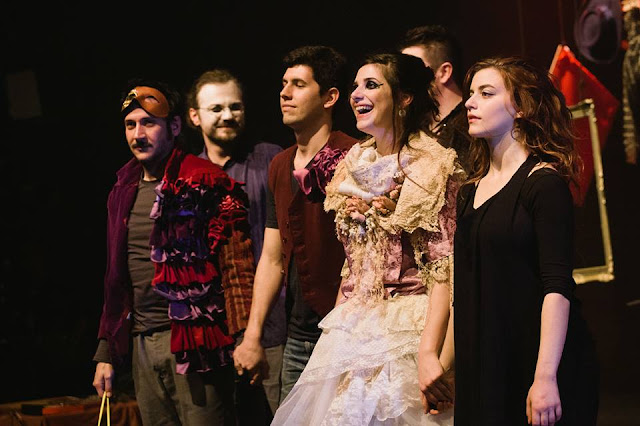 In June, Ioanna had a gig for the International Retail Conference in the Platform Theatre, where representatives from big company  met to discuss how shops could be organise in a more performative way. 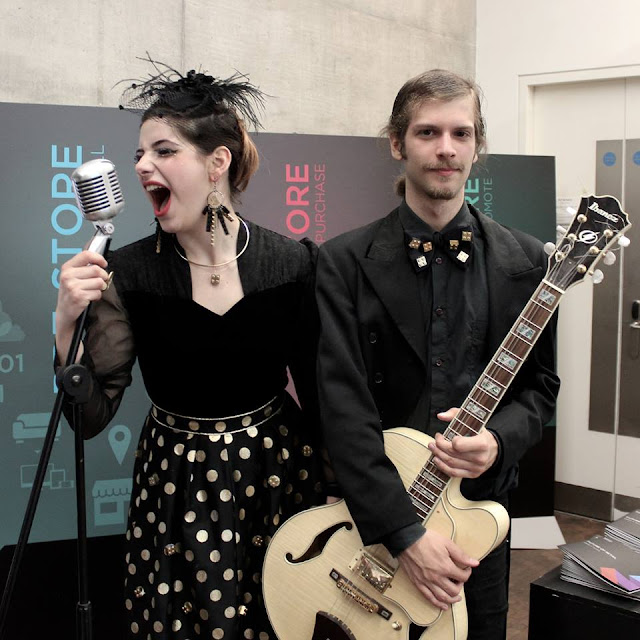 So with Ioanna, we thought it could be interesting to stage Lego and present it in a performative context. She wanted to create a jazzy 30's atmosphere, so the challenge was to mix the vintage aesthetic of the style with the futuristic one of the lego's shape. 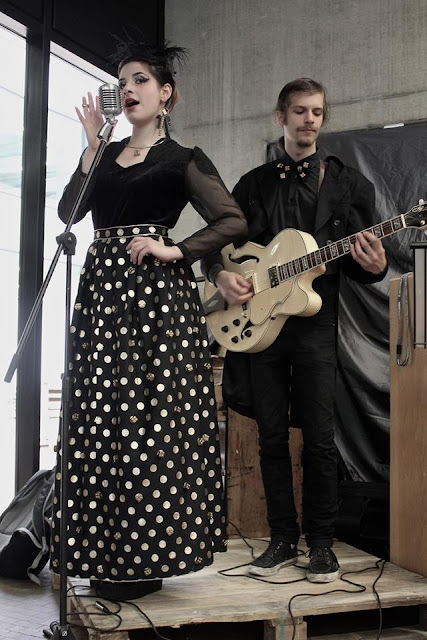 Using gold sprayed and black lego change the feeling of the original playful and coloured brick. Legos  as small gold bar on a bow looks more precious and elegant. 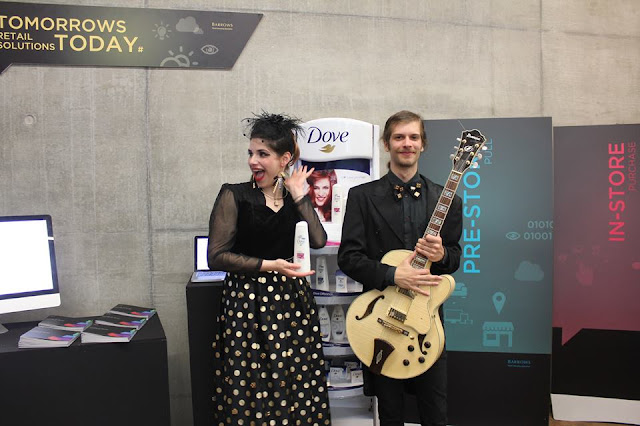 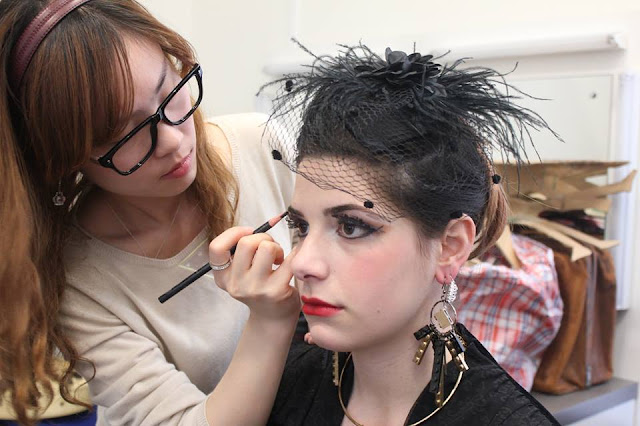 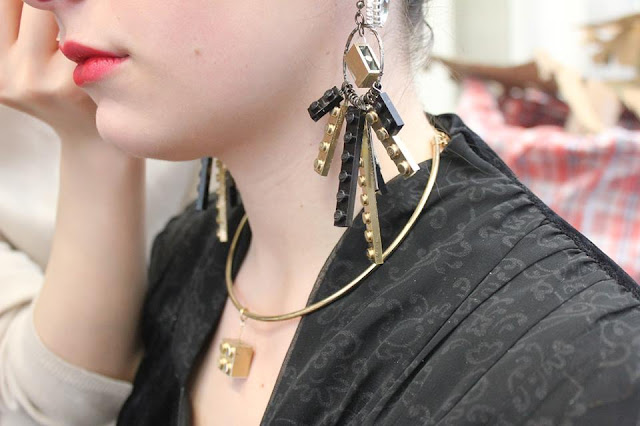 I like this minimalist necklace -just one golden brick on a golden wire. 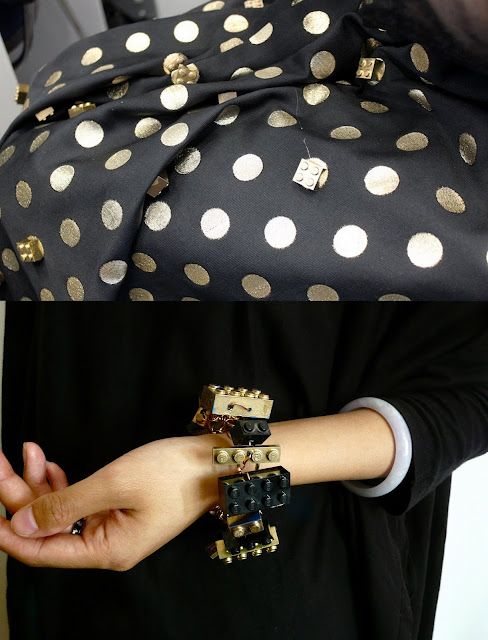 On the afternoon, Ioanna changed for the lady in pink costume and I added the "Sophie's touch" on the musician's bow:  the barbie arm -so chic! 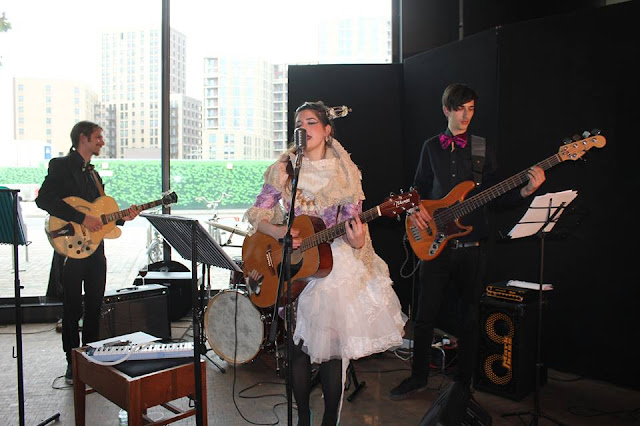 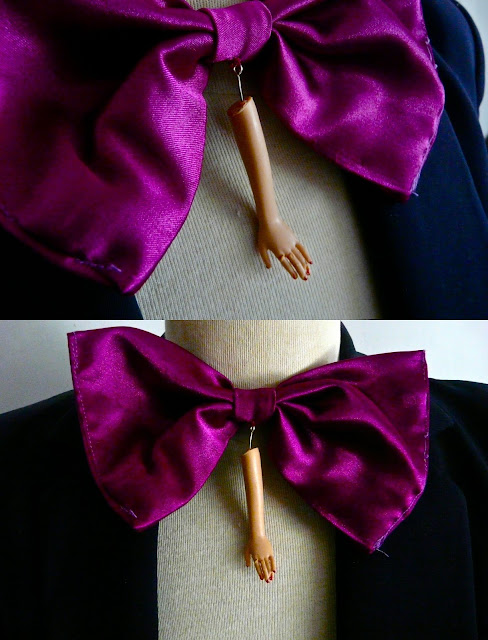 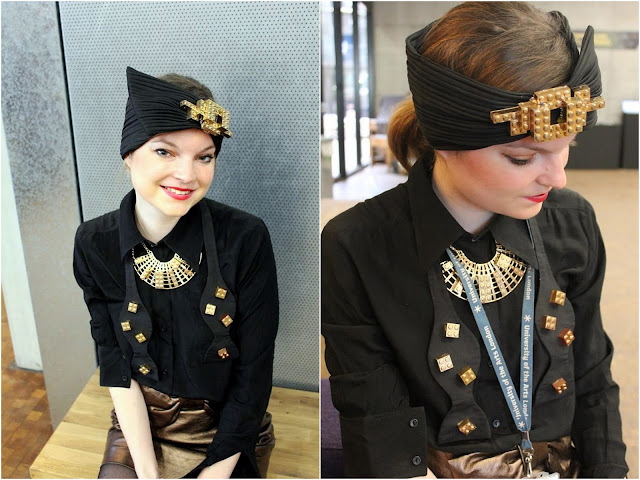 In my view the costume designer is not the technician dressed in black in backstage but has to match its creations, I made this golden lego headband but Ioanna choose a different headpiece which fitted more her hair style so I decided to keep it for me!